We looked inside some of the posts by newx-menfan and here's what we found interesting.

newx-menfan·2 days agoAnswer
Do you ever think about the fact that Cessily could have wished to have her powers removed, like Kevin, but she decided to simply have her parents love her instead? That makes me think Mercury actually likes being a mutant and a hero.

I think Cessily didn’t want to change, she just wanted her parents to love her for exactly who she was…I don’t know if it means she necessarily likes being a hero or a mutant, but it is pretty relatable conflict. A lot of people struggle with wishing their parents or others could accept something about them…

I think it’s the difference of someone blaming themselves/being gaslit because they’re still trapped in that mindset versus having some awareness of knowing it’s the other person who can’t accept you.

Kevin still very much blamed himself heavily for his father’s death and had that blame reinforced by the justice system.

Cessily, in comparison, was separated from the family dynamic after going to Xavier’s, allowing her to be able to see the reality in the situation… (Along with having the benefit of not having a dangerous power, so there’s a lot less self hate).

No, but if people recommend it; I would definitely check it out! :)

This has kind of been Sinister’s year!

While I won’t read ‘Hellions’, since it just annoys me as a fan of the original Hellions and the Academy X 2.0 version…I am glad Sinister is getting his due again!

#question, #answer, #Mister Sinister, #Nathaniel Essex, #x men, #Hellions, #Zeb Williams
0 notes · See All
newx-menfan·2 days agoAnswer
The Runaways art reminded me that Logan is supposed to be 5 foot 3 and one thing that was changed for Laura after Secret Wars was change her official height from 5 foot 6 which I think it said in All-New X-men to 5 foot 1 since otherwise she would actually be taller then Wolverine. Of course they pretty much always ignore how short both Logan and Laura are supposed to be anyways so I don't know if it really makes a difference?

Yeah, it always annoys me that Laura was suddenly made to be short, since she wasn’t when Kyle wrote for her :/

As others have said- while I do LOVE Jackman’s representation of Logan and will forever see him as ‘Wolverine’…I personally miss hairy, short, and unsightly Logan…

#question, #answer, #Wolverine, #Logan, #x23, #x 23, #laura x23, #Laura Kinney, #x men, #Marvel, #Hugh Jackman
6 notes · See All
newx-menfan·2 days agoAnswer
My theory/ headcannon for how Surge was able to get to America is that she went through human trafficking, and when she reached America the human traffickers turned out to be bad guys who want to sell her to some evil scientists who experiment on mutants, but since she was a speedster she was able to escape and lived in the streets till she joined the x men. What do you think?

Sooo…while we don’t have Glob in this issue (Yay!)…we still have to endure Brisson’s blah take on Hisako (Boo!)…

Meanwhile Boom-Boom and Armor are with Magma to Nova Roma (I’m going to be honest- I HATE this storyline. I hate the whole premise of ’Nova Roma’ SO much, and was thankful for X-Men Evolution for just ignoring it and making Amara only from Brazil…between the painful use of ‘blackface’ in its comic introduction, to writers trying REALLY hard to make it Marvel’s 'Themyscira’, and everything else tied to it- I just wish it would go away. The ONLY interesting part of ’Nova Roma’ was its connection to Selene…and Marvel then blotched that up- so yeah, I have NO EXCITEMENT for this issue…)

Magma’s father called her because they found a mutant running from some random mutant eating creature…(Kind of a right of passage for mutants, any more…)

Amara, Hisako, and Tabitha go to look for the mutants friends who were also chased.

Tabitha is just about to leave, when Amara admits she brought them here after the incident in Nebraska with Beak’s family, to remind them about doing good deeds (Apparently Magma thinks their slacking in charity and heroics…).

They suddenly run into a ’Tremors’ like creature, (I’d probably give the book more points if Kevin Beacon popped up 😂…) and Armor gets a ’boss’ moment (I mean, she WAS trained my Logan…).

They find the creatures ATE the kids friends, (OR WERE they TURNED into the creatures…??!) and take the samples back to Beast.

Shaw gives it to a competing cartel in the area… Armor, Boom Boom, and Magma gets the remaining mutants to Krakoa; while an ’Arwen’ look-a-like scientist is PISSED her creatures got butchered…

This issue…was hard to get through. As followers know-I’m not a Brisson fan after his treatment of Anole last year…so him completely taking over the rest of this book is…a huge bummer.

With Hickman’s departure-I’m probably dropping this book after this arc. 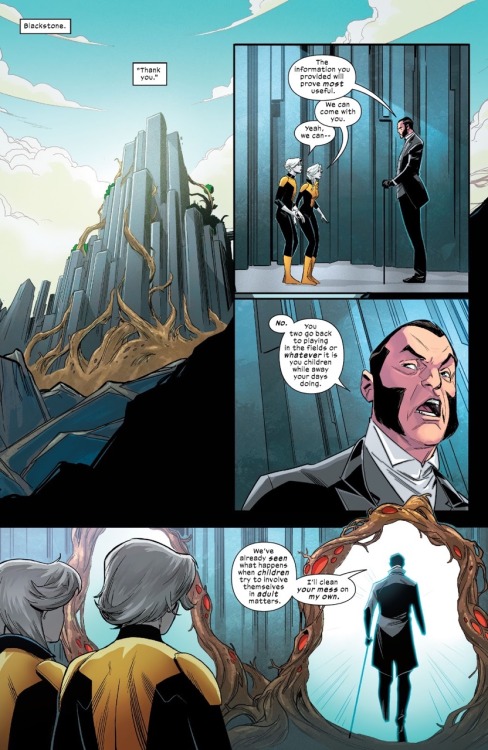 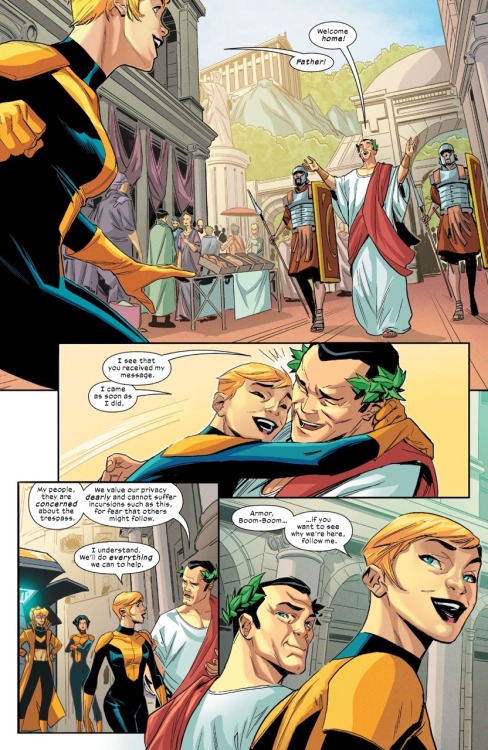 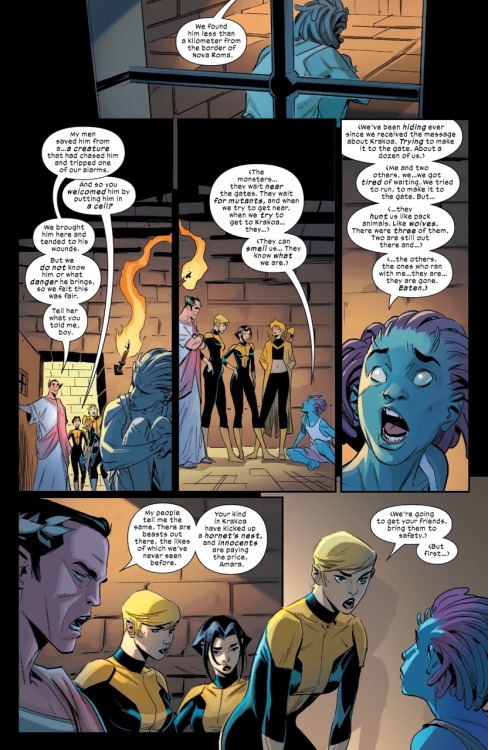 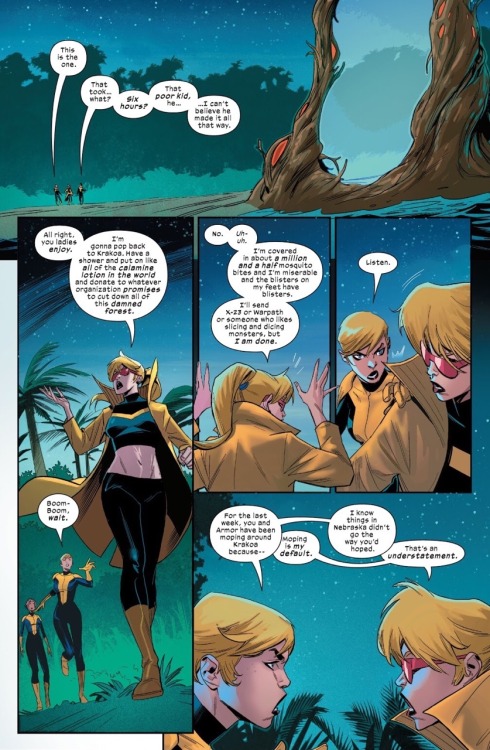 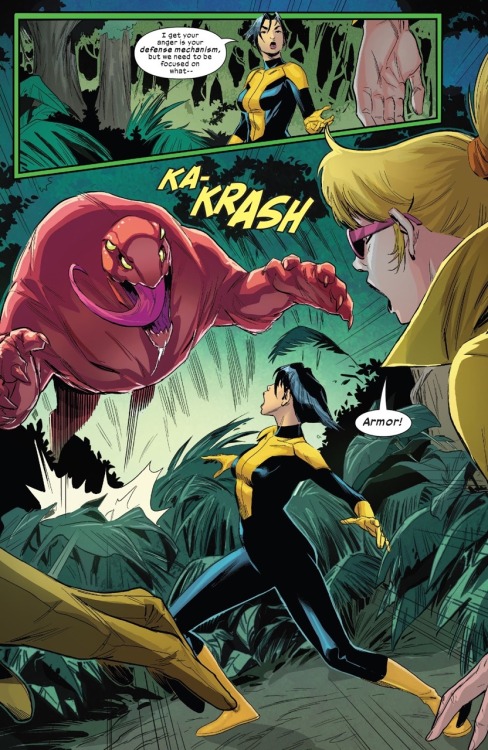 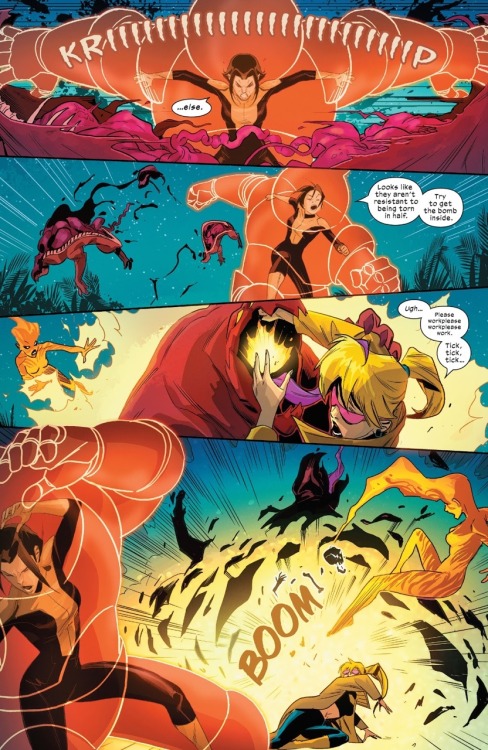 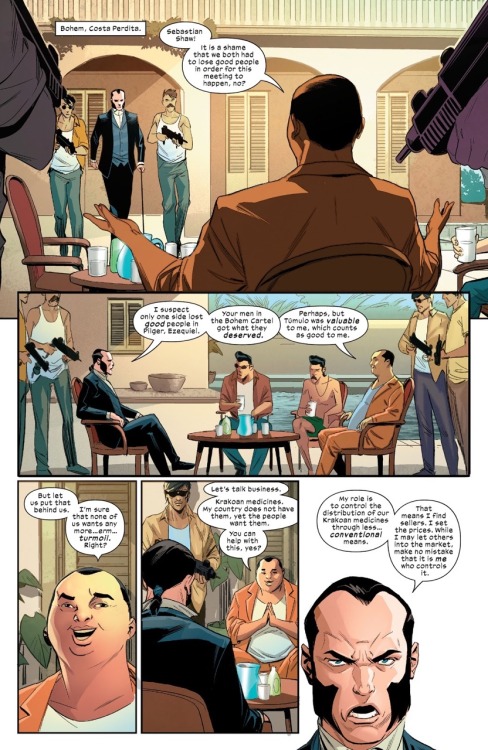 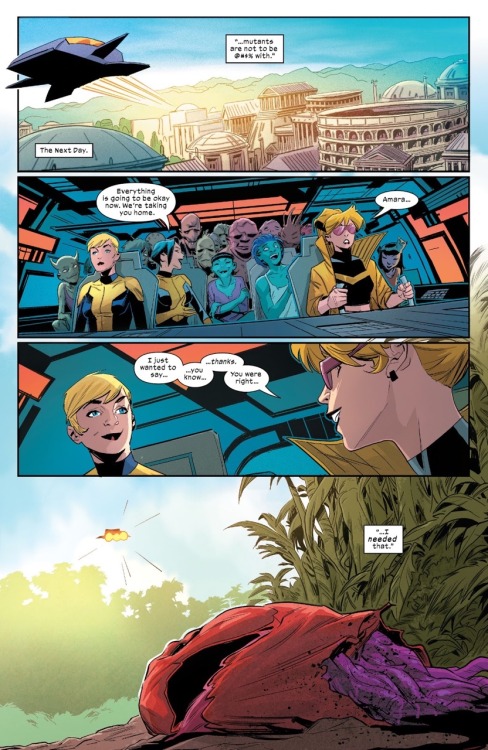 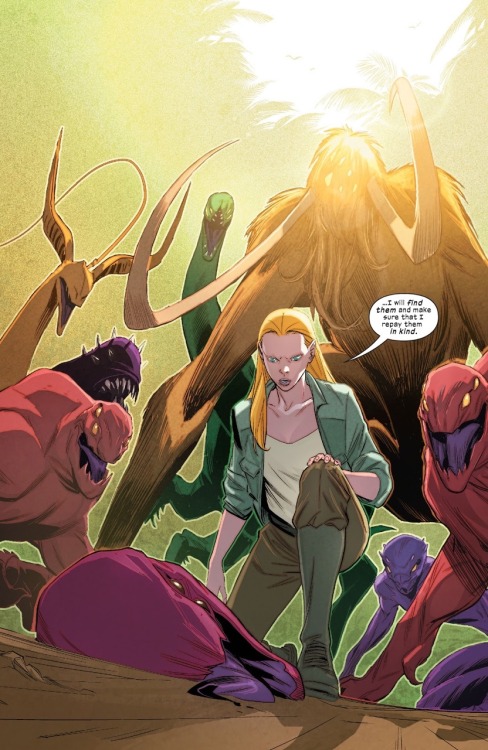 I’m taking a week to catch up on the backlog of X-Men issues and, if I’m being honest; the pandemic has just been pretty emotionally hard and draining.

So- I will still answer Q and post reviews, but they’ll be no other posts this week.

Thanks, and stay safe!

I’m taking a week to catch up on the backlog of X-Men issues and, if I’m being honest; the pandemic has just been pretty emotionally hard and draining.

So- I will still answer Q and post reviews, but they’ll be no other posts this week.

Thanks, and stay safe!

(BTW- if you can/feel comfortable , still try to order merchandise or tradebacks from comic book stores if you can. Most stores will ship it and it helps them stay in business despite no longer selling single issues…)

TBH, I’m hoping Diamond dies as a result of all this. Its monopoly and stranglehold on distribution has been damaging the industry for years.

They spent YEARS refusing to change an outdated system/ shaming fans for using online stores, despite people often using them because of there simply NOT being a comic shop close by where they lived or often discomfort from the gate keeping mentality imbedded in this medium…only to THEN pull this… 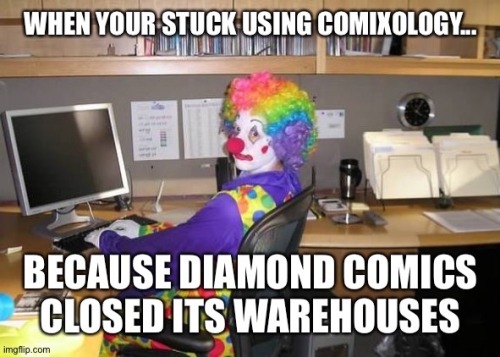 Kind of fitting that a post about ‘Goth Teen Rogue’ would make it halfway to ‘666- The Number Of the Beast!’

Oh look! IT ME

Appreciating the goodness of Goth Rogue with us :) 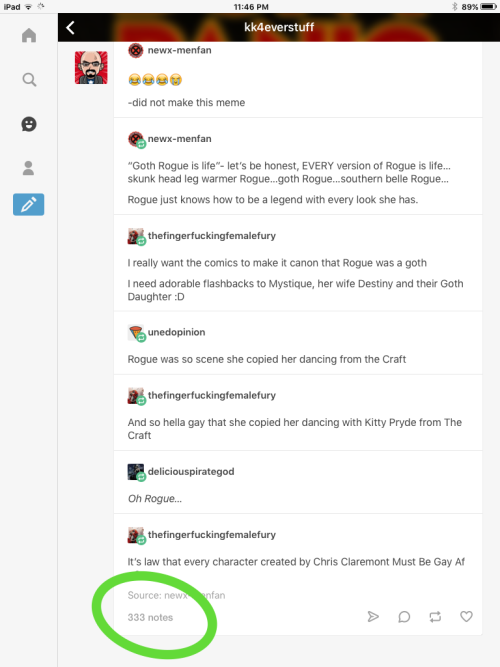 Support the cult favorite ‘New X-Men:Academy X’, by signing our petition for the NXM to get a NEW ongoing today!

(BTW- if you can/feel comfortable , still try to order merchandise or tradebacks from comic book stores if you can. Most stores will ship it and it helps them stay in business despite no longer selling single issues…) 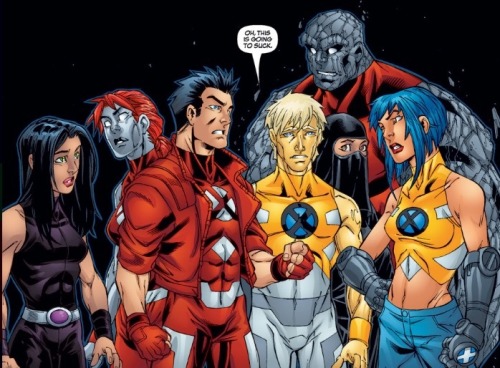 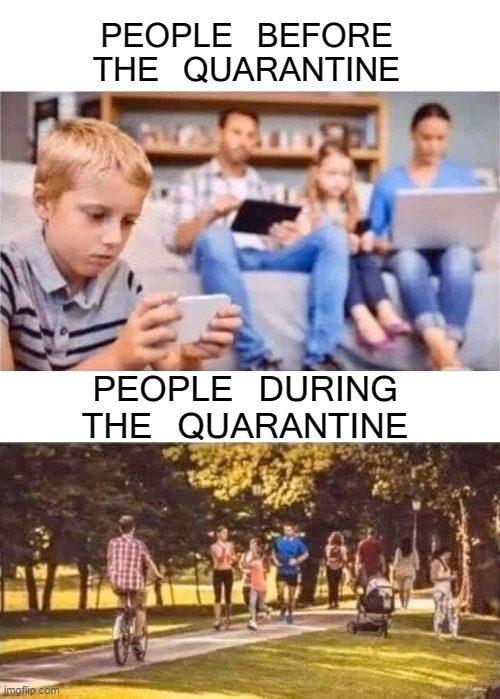 Kind of fitting that a post about ‘Goth Teen Rogue’ would make it halfway to ‘666- The Number Of the Beast!’ 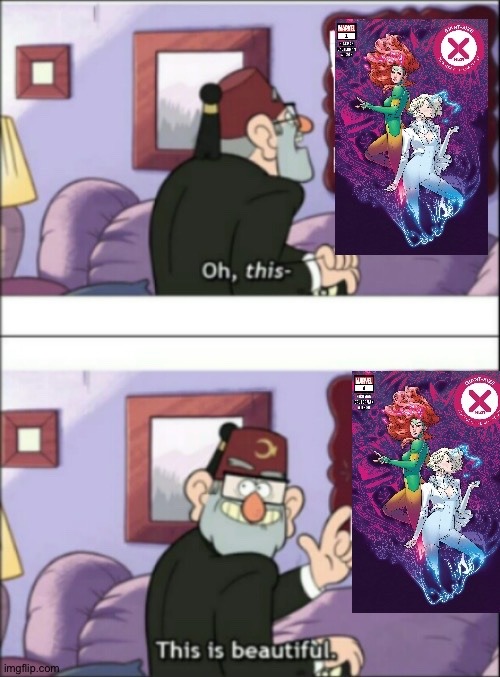 “There are to be no gunfights in my home”

Daredevil season two. I’m placing a moratorium on Matt and Frank shooting each other

It was critical role so… who am I stuck with? The characters or the players?

I am quarantined with the Legends of Tomorrow! :D

Gonna have a gay old time <3

If the cast of Legends of Tomorrow is in my house, I’m not going to notice the damn quarantine. (Especially since the last show I watched was the final episode of the Crisis crossover. Srsly, three of those people can do salmon-ladder exercises. I could build a salmon ladder.)

Coyote Peterson.  My cats are gonna be SO MAD by the end of a week!

Me too! I’m showing Leverage to LJ!

My Leverage Children which I am SO HAPPY about

Tips to stay grounded during quarantine

the most important thing really is to listen to your mind and body, and respect what you need. sometimes what we want and what we need isn’t always the same, and taking a moment to really feel if what you want is the best thing for you, can be a real game changer. take care of yourself, and the people in your life. please feel free to reblog, if you think this is useful. i hope it will help you through this time. stay safe 💕 ✨

My immune system should be at superhuman levels by now. 🍆💦

Hence why i try to get in two beats in a day.

#😂😂😂, #I'd much rather see the Gov encourage this instead of hoarding malaria drugs...
41 notes · See All
newx-menfan·8 days agoPhoto 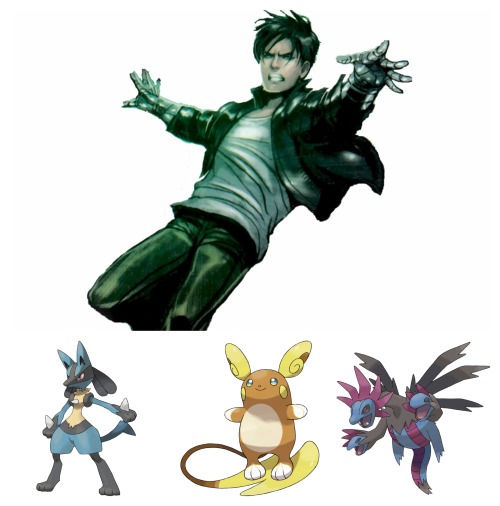 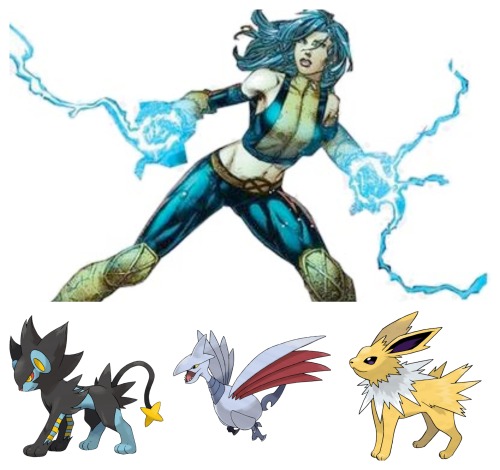 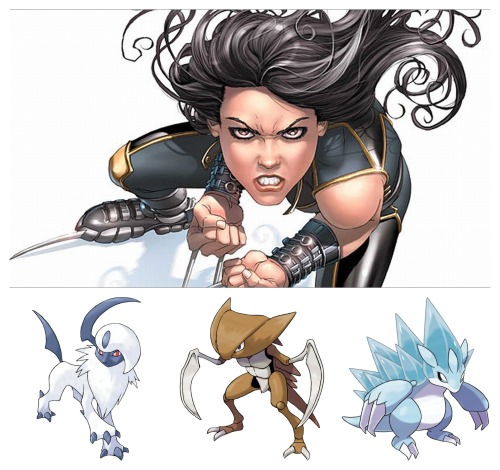 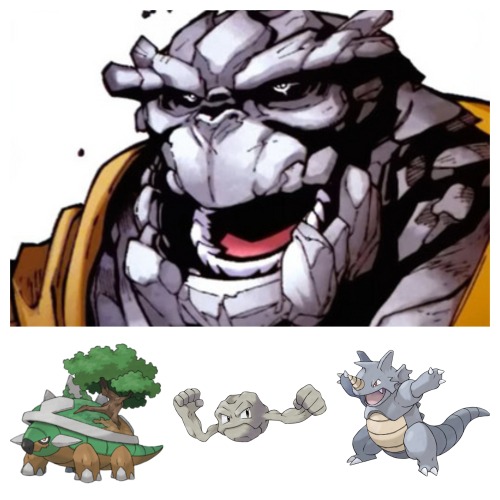