nicelytousled
bedhead?
I'm Bird, 19, they/them queer. This is 50% Old Guard stuff and 50% pure nonsense. I write fic and make art!
Explore Tagged Posts
Trending Blogs
Statistics
We looked inside some of the posts by nicelytousled and here's what we found interesting.
Inside last 20 posts
Time between posts
7101.7
Number of posts by type
Photo
5
Video
0
Audio
0
Text
13
Chat
0
Answer
2
Link
0
Quote
0
Fun Fact
In an interview with inc.com, David Karp (Tumblr's founder) admitted, "Being on computers all the time makes me feel gross."
nicelytousled · 4 hours ago
Text

your future self loves you. they will look through old photos of you with affection, not disgust, nor embarrassment. they wish they could tell you stories of your future, of how much you’ll change, of the people you’ll meet, of how you’ll eventually learn to accept yourself, then love yourself. they will read your diary entries and poems and favourite lyrics, heart aching, tears in their eyes. if only you knew…

your future self loves you. if only they could show you. they are living proof. you’ll turn out okay after all. they wish they were there to console you, dance with you, and make you write it a hundred times: “I AM LOVED”. they will listen to playlists you made, just to experience you again. they will write you a letter - of forgiveness, longing, reassurance. you will never read it. but you will know.

Nicky: oh god Joe isn’t home and I forgot an english word and this is bad he usually helps but now he can’t

Nile: maybe I can assist?

Nicky: ok so you know that little sea bug with the stupid hands and it has a home but it changes homes sometimes?? what is that??

anyway I was listening to MIKA and got the usual dose of euro-gay feels (WILL ANYONE WRITE ME JOE/NICKY SONG FIC TO “BOUM, BOUM, BOUM”?) and so I was thinking -

- Joe loves making snacks, and always decorates them in the colours of the country he thinks will win. he’s scarily accurate with his predictions (the only time he got it wrong was 2010, because who would’ve thought that Germany wins? Exactly.)

- Nicky and Booker are generally jovial with each other, but bets are OFF (no joke intended) when it comes to dissing Italy’s/France’s acts. It’s worse than France Vs Italy football matches.

- Andy does not wait until the 9th act to start drinking. She also laughs at the cringey songs in native languages the others don’t understand

- Nicky is a grandpa and likes even the ballads

- Booker has the monopoly on the burner phones, and has more than once tricked Nicky into accidentally voting for France.

- but it seems to be a big party and everyone is having fun and if the others are happy, she is happy

#also imagining the nicky/booker conflict in 2015#nicky normally keeps his bets small for eurovision#but booker cleaned him out that year#i’m v amused by my hc of nicky having an illogical hatred of mans zelmerlow for that reason#he shows up the next year as the host and nicky’s raging#like YES he’s hot I DON’T CARE#he stole the win from il volo!!!#*co-host i’m so sorry queen petra#ALSO#1990#for once nicky won big#booker grumbles about it#and nicky is so damn smug#he just looks at booker right in the eyes and goes#‘come on now…. UNITE UNITE EUROPE’#booker nearly strangles him after the 10th time#now i have a hc that this became a running joke#when booker and nicky have arguments and they’re being snippy#someone will pop in with UNITE UNITE EUROPE#it makes them all laugh and the tension is broken#the old guard#eurovision#i’m excited to come up w more HCs as we get closer to the contest this yea#*year

@harrynightingales​ yes, yes, yes Nicky would *hate* Mans Zelmerlöw, I can see him cooking in the kitchen and Booker would walk past humming “Love, Love, Peace, Peace” and Nicky would grumble and add too much salt to Booker’s serving

Booker: *tears in his eyes after one bite* what happened to a united Europe, is Sweden not part of Europe

#idk how its taken me so long to realise shes the dancer from the Lemon music video#like what a fucking ICON#SHE DID THAT#!!!!!!!!!#this vid is great too she looks great
52 notes
nicelytousled · 16 hours ago
Text

so there’s this he/they…

Ms Polarcell, i hope you dont mind me saying this but your love for mr Joe theoldguard is so apparent in your works (even if i didnt see your gush posts haha) it shines through in every one of your drawings of him, he shines from inside, the love is in every little line and detail and it certainly does him justice. I feel so tender just looking at them ♡

Of course, I don’t mind you saying this!!! It is true, I do love him very much, and I am glad you think I do him justice, I certainly try to draw him with all the love I have, so it makes me happy to hear that you feel like it is coming through. Thank you so much for your kind words ❤️❤️❤️!

I am hopefully going to do a full Joe and otter daemon sketch dump at some point, but I felt like I couldn’t let this ask go answered without a drawing of joe, so here he is, otter daemon and all. Slightly longer hair this time because I said so

#HE!!!#HIM!!!#THERE HIM IS!!#i know like nothing about the golden compass or the rest of that whole thing but i love these au's
139 notes
nicelytousled · 17 hours ago
Text

You’re a child. An infant. Your mocking is thus infantile. He’s not my boyfriend. This man is more to me than you can dream. He’s the moon when I’m lost in darkness and warmth when I shiver in cold. And his kiss still thrills me, even after a millennia. His heart overflows with the kindness of which this world is not worthy of. I love this man beyond measure and reason. He’s not my boyfriend. He’s all and he’s more. - The Old Guard (2020)

(Sidenote: Nicky my dude, WHY IS YOUR FACE SO GOSHDARN HARD TO DRAW?! I barely made the friggin deadline!)

hi hello, I would like to hear your theory about how Joe pulled Nicky in for the kiss with a hand on the cuffs... tell us more please 🙏

[puts on reading glasses] hokay so, when you look at the first shot of the kiss, you can see that when nicky pushes away from the bench hes leaning against, he goes left-shoulder-forward

and like, okay, 1.) when youre leaning your weight against something and want to sit up, you usually push off with one shoulder, and then your other shoulder goes forward like his does, but nicky isn’t really pushing off with his right shoulder enough to initiate that left-shoulder-first movement; he doesnt really seem to be pushing off the bench much at all, kind of as if.. .. .. .. . he was being pulled forward by his left arm

2.) if joe were pulling nicky forward, he’d kind of have to pull the cuffs either to his left or right instead of straight towards his chest– just bc of the range of motion and amount of space he’d have while leaning forward with his hands bound like that- so he would’ve had to grab nicky’s cuffs and pull on them towards either the left or right of his own torso.

if joe grabbed the cuffs close to nicky’s left hand, and then pulled them towards his own left side (nicky’s right), then nicky’s left shoulder would be pulled forward first like it is in the gif, and nicky’s hands would end up on joe’s left, near his own legs/lap

and oh look that’s exactly where his hands end up

3.) looking at that first gif again, right after joe and nicky kiss, joe’s shoulder drops . …. kind of like he’d just let go of something, & as a matter of fact, nicky’s shoulder also drops and pulls back in the same instant, as if….….  .… no longer being pulled in toward joe’s left

4.) marwan’s comment about how ‘i was pulling on his cuffs to make them tighter’ makes more sense in this context. the first couple times i heard him say that i thought he meant he was screwing around with luca between takes, but he’s talking about the kiss specifically for this question, and him essentially saying (or trying to say, lmao) ‘oh, in the shot im pulling on his cuffs but you cant see it’ makes much more sense in the context of the question and doesn’t come so out of left field.

(and i mean, he words it a little weird, but he was like… visibly kind of nervous and shy while answering that question– he says ‘it was fun’ like f o u r times over the course of thirty seconds– so it’d make sense if he was saying things  weirdly or not communicating quite what he was trying to.)

5.) joe and nicky smiling makes sense without this context (they could just be amused by the ‘incurable romantic’ line) but joe essentially going “*tug tug* want kis plz” also adds another reason for them to be smiling like that

5b.) it also adds additional explanation for why luca m i s s e s, lmao

[Text ID: “The love I’ve known is the love of
two people staring

not at each other, but in the same direction.”]

Love how the 1995 adaption of Pride and Prejudice remained accurate to the book in almost every way but then just went: let’s add Colin Firth taking a bath, Colin Firth fencing, Colin Firth jumping into a lake, Colin Firth walking across a field in a wet shirt 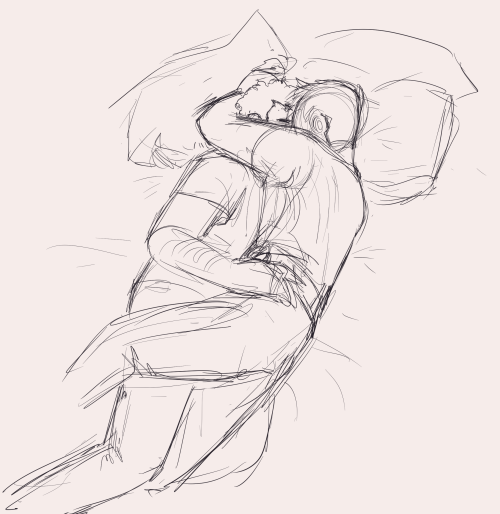 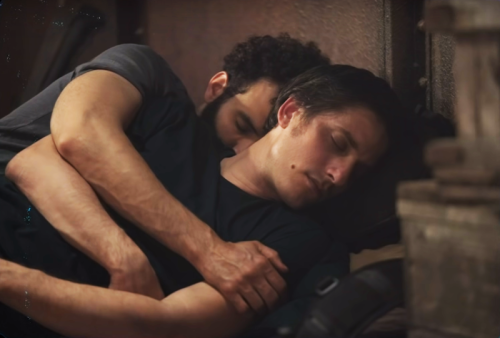 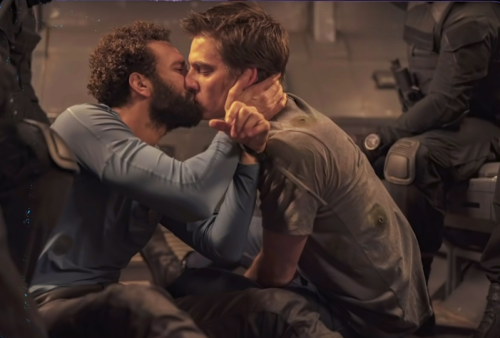 #they LOVE eachOTHER
2K notes
nicelytousled · a day ago
Text

TIL in 1840’s New York, a man would walk up to strangers, acting as an old acquaintance. Gaining their trust, he asked, “Have you the confidence to trust me with your watch until tomorrow?” He would never return. When arrested, he was dubbed the “Confidence Man”, the origin of the term “Con Man”.

…and that man? Sebastien Le Livre