We looked inside some of the posts by pan-catra and here's what we found interesting.

Me: *reading articles about the Mormon church as a cult due to some posts I’ve seen today*

Me: *comes across the mention of lime Jell-O’s popularity among Mormons*

#BRUH I WAS A PART OF THE CHURCH AND I CAN CONFIRM, #THOSE BITCHES LOVED THEIR SLIME GREEN JELLO, #and also systematically destroying the personhood of the people they trapped in the church, #and then exploiting them for as much money as possible, #but that ain’t as fun to talk about, #kit speaks, #sorry y’all for getting off topic but this was too accurate for me to ignore
42 notes · See All
pan-catra·3 days agoText

I don’t know why i did this 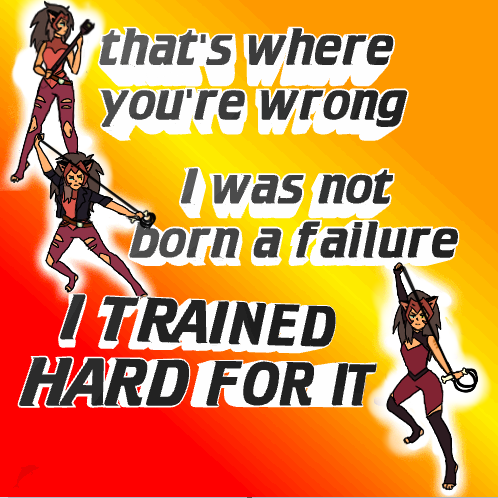 #time for some memes to make this less Sad Central, #if ya know what i mean, #spop, #catra
427 notes · See All
pan-catra·3 days agoText

you know, as a cult survivor myself, i get extremely uncomfortable seeing how a good chunk of the fandom talks about Hordak’s status as a cult survivor. the amount of people i’ve seen completely downplay his trauma or straight up say that being a cult survivor ““isn’t that big of a deal”” is so awful. it just kinda reminded me of how society doesn’t really understand religious trauma and tries to push it under the rug.

This is the aspect of Hordak antis that I find like… real-world troubling.

When people identify with Hordak, it’s not because they dream of colonizing a foreign country or whatever other nonsense people use as an excuse to be rude. It’s often because they’re disabled. Or, as is OP, they struggle with legitimate cult survivorship or, at minimum, some form of religious trauma.

Being cruel to people who enjoy Hordak isn’t like… fighting the patriarchy or whatever. It’s hurting people who have been traumatized by serious events. It’s mean and shameful, and I will forever think poorly of people who do it.

My religious trauma is one of the main reasons why viewing Season 5 made me feel extremely uncomfortable.

I never posted these here, but after reading this post, I feel that I should.

Despite how simple my drawings regarding this topic are, I. Was. Terrified. during this scene.

I could feel the chanting.

I could feel Hordak’s screams.

Truth be told, I had bury my head into my friend’s chest until the scene was over.

Religious trauma is nothing to take lightly or brush aside. And I’m inclined to agree with @cruelfeline , it is mean and shameful to hurt people with such trauma.

this scene with Hordak legit made my skin crawl when i first saw it. it reminded me so much of my own baptism i almost stopped watching the show. your drawing perfectly encapsulates that feeling of how similar Horde Prime’s cult is to real world cults, and why trying to ignore or outright belittle Hordak’s trauma is so harmful.

My sweety-kitty, Sparkle, always does this thing: she lays on the ground on her back, pulls up her paws and stares at me. The hair on her tummy is iresistibly soft and she knows well I’ll go near to give her some pats, but as soon as I’m there to reach out, she rises up and runs away. Then she usually jumps onto the bed or a chair and gets mine cuddle. O U O 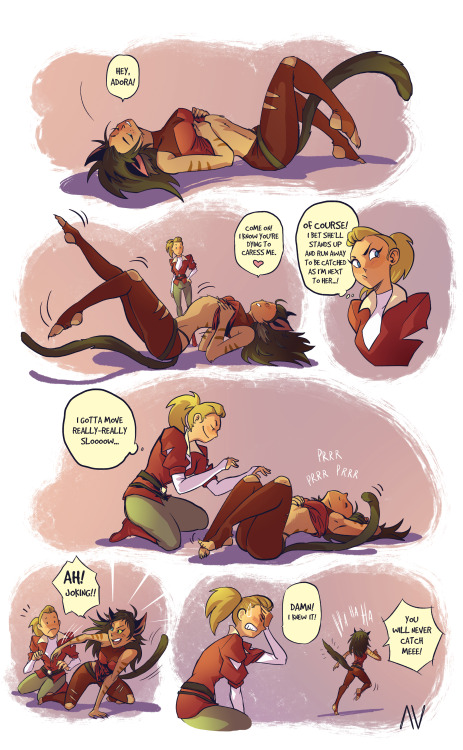 D'you know why this scene is so sad? When Adora left, Catra tried to convince her to come back. She looked for her many times. She argued with Shadow Weaver, who, for the millionth time, blamed her and reminded her that she was nothing without Adora. How she didn’t care enough about Catra to come back. She ended up convincing herself that she had never been important to Adora, that she just wanted Catra around to show how much better she was.

But Scorpia? She NEVER left her alone. She saw the worst in her and yet she stayed by her side time after time. But now, Catra is standing alone in front of her friend’s letter, feeling the weight of her choices. There is no one else to blame. Not Shadow Weaver. No roaring hero complex. She doesn’t even dare to say it’s because Scorpia doesn’t care enough about her. She has convinced herself of thousands of horrible things throughout her life, but to say that Scorpia didn’t give her everything she had was too much even for her. She knows it. She feels it. She is consumed by it. There’s nowhere to hide from the truth. Not this time.

you know, as a cult survivor myself, i get extremely uncomfortable seeing how a good chunk of the fandom talks about Hordak’s status as a cult survivor. the amount of people i’ve seen completely downplay his trauma or straight up say that being a cult survivor ““isn’t that big of a deal”” is so awful. it just kinda reminded me of how society doesn’t really understand religious trauma and tries to push it under the rug.

#hordak, #spop, #kit speaks, #discourse, #religious trauma is just as valid as any other type of trauma, #stop trying to erase it from characters just so you can find it easier to hate them
431 notes · See All
pan-catra·3 days agoText

the reason i headcanon catra learning how to cook as one of her hobbies after the series is, alongside havin fun w the super pal trio, she also uses her cooking skills to artfully manipulate adora into being more comfortable admitting wat she wants in general. she does this by crossing the “i need food to live” and “food i prefer” wires in adoras brain wen asking her wat she wants for breakfast/lunch/dinner. yes this may lead to catra making steak and eggs for breakfast for like 16 days in a row but the strategy works. glimmer and bow are in fucking awe.

she writes all her recipes to be “adora-proofed” also, meaning if adora reads it and follows it (with her reading speed put into consideration), the dish will end up AT LEAST half decent. this makes each recipe the length of a phd thesis.

did i just search through all catradora playlists on spotify until i found one with antebellum by vienna teng? yeah, it’s called taste and it’s terminal

Catra: Your smile? It makes my day.

Adora: Your happiness? I live for that.

Mermista: A room? Fucking get one.

So I did my first readthrough of the rough draft script between pages at work and didn’t catch every detail, but I’m reading through it again…

“She was afraid, in the end. And she suffered, as she suffers now.”

First off, I think it’s really interesting how much of Prime’s exposition was cut in favor of letting the story tell itself

But that specific line, as she suffers now, says so much. It flies directly in the face of how he gave her “peace”, for one thing, and straight up tells her that she’s still hurting now, despite everything. And now it’s worse, because she has to watch herself fighting Adora, knowing Adora won’t fight back, knowing how easily her claws could just slice through Adora’s skin, and she’s failed the one good thing she tried to do, she didn’t keep Adora safe, her sacrifice was for nothing, and now she’s going to be the one to kill Adora, and it doesn’t matter how much she fights back, and that must be agonizing to her.

Even with the line cut, though, we still know all of that. We know Catra is struggling because we see her trying to break free of Prime’s control, we know Catra was done fighting after the apology, we know from “why did you come back” how frustrated she is with Adora and her stupid hero complex, we get it all from the story without Prime enjoying the sound of his own voice.

It’s all so good. I love this episode so much.

”You always wanted more… but all she ever wanted was you”

Van Helsing Adora likes to sketch Catra in her free time…but sometimes she has too imagination. 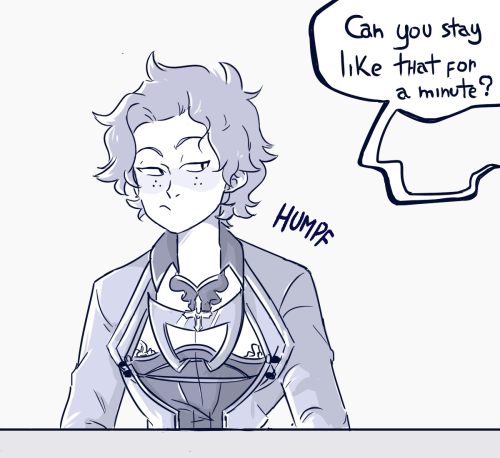 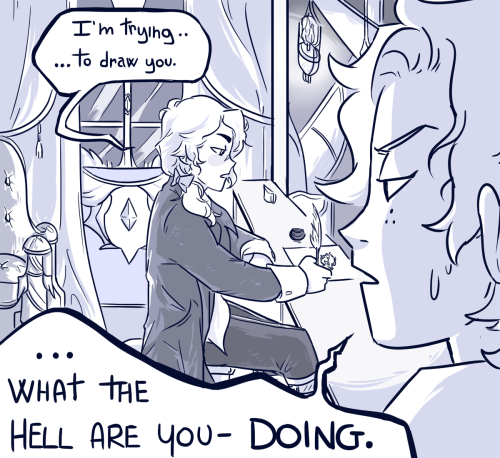 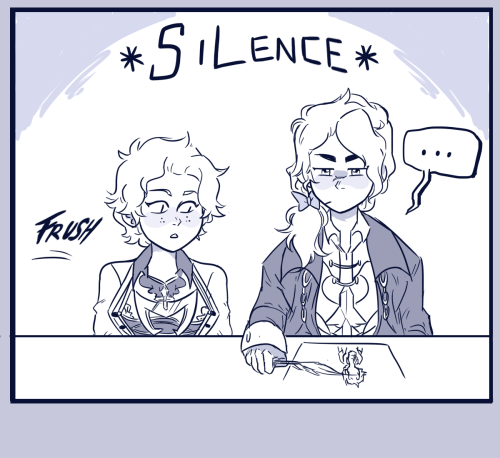 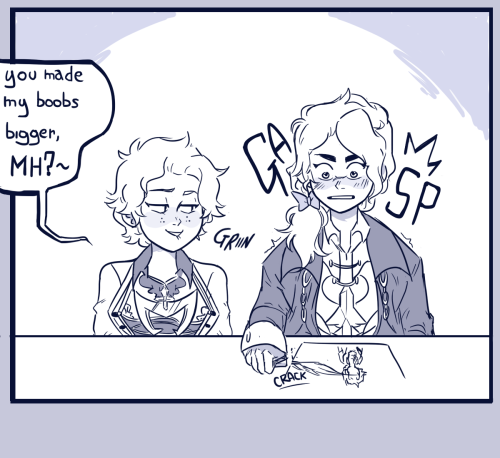