this blog gets deleted in t-5 days.

ask about this high school shit. this is your last chance.YOU'RE IN LIMBO. i've started using my new tumblr. for the purpose of making new friends at college. however, i'm not disclosing the url to you. until my last day of school, aka may 24th. and i'm only disclosing it to you if you personally ask me to disclose it to you. so if you want my new url, ask me sometime between now and may 24th, i guess. and i'll let you know my new url on may 24th.

We looked inside some of the posts by pandorasvault and here's what we found interesting.

i want to do a nice cover.

someone come tell me what to cover. 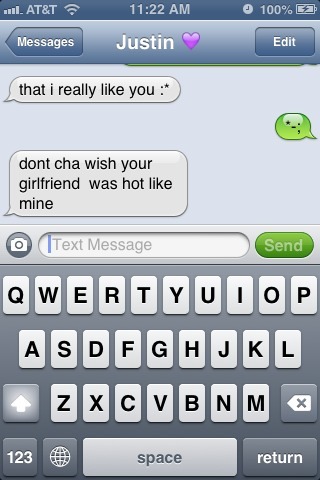 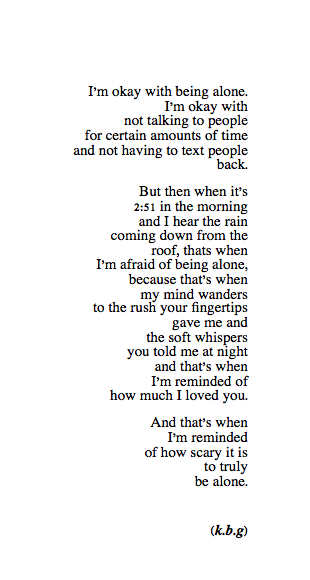 see, here i was starting to think that i was better. and that i was okay.

and none of you have noticed.

or none of you care.

because i’m last in everyone’s lives.

i could disappear off the face of this planet

and none of you would even fucking take notice.

all i want to do is bawl my little heart out

and i don’t have the faintest idea why.

FOR THE LAST TIME, I AM NOT STONED.

0 notes · See All
pandorasvault·7 years agoAnswer
Will you have sex with me?

sex is so gross.

that’s why i’m a virgin.

I was embarrassed that I was late for my first day of kindergarten.

My mom led me in by the hand, and I hid behind her leg like a four year old. But I wasn’t four, I was five. And five year olds don’t hide behind their mother’s leg.

My teacher Mrs. Beard led me to an empty chair to sit in. I giggled when she said her name. She did look like she had a beard.

I was greeted with a chorus of “Hi who are you?!” And “Wow your hair looks so pretty! Can I touch it?!” (I took pride in my mom’s banana curls.) I was really confused as to why they wanted to touch my hair. I was too young to realize it then, but I was the only white girl in the entire class.

And the girl across the table sneered at me.

We read chicken soup poems about the days and months of the year.

And I counted them down as I ate chicken noodle soup in the nurses office.

She made me read every single one. Out loud. Every day. Because I refused to speak at all in class.

And she’d yell at me. And tell me not to slur my words and to slow down. And I cried.

Because clearly this “nurse” never understood what it was like to be made fun of for your voice. For something you had no control over.

I faked sick at the nurse almost every day.

Because I felt safe.

That’s the year I broke my middle finger on my left hand.

And the year I started screaming “fuck you” to the world.

The thing about going to elementary school with your brother is that everyone knows him.

And I lived in his shadow.

“Corri your brother was so great at this.”

I found myself six feet cast under his shadow, with impossible shoes to fill.

I would always be the first to finish a task, and I wanted to help the other kids learn it too.

There was a boy named Musa, who came to our school from Africa that year. He barely spoke English. And I was appointed by the teacher to become his own personal tutor.

And the other girls taunted me:

At our school, we have an award that celebrates the nicest person in school. The entire staff of the school, the principal and the lunch ladies and everyone that works there gets to vote on it.

I remember the popular girl went around saying that she would win it, because she was so nice.

(And I wondered how she thought she was so nice when she made me feel so bad about myself.)

And when they called my name, instead of being overjoyed that I was considered the nicest person in the entire school, all I thought about was how the popular girl and her friends could make my life more of a living hell.

For the first time in my entire life, I had friends.

And it was incredible.

I have social anxiety.

Talking to people is a challenge, nevermind talking to new people.

I was afraid of my past, and that fucked my future socially.

And when I tried to talk to people, I got brushed off.

I got told constantly to calm down, that I was too loud.

And after a while, I just stopped all together.

I lived in my own reality.

Where my mom was still here.

This is the worst year of my life.

And I took it out on myself.

I got lost between the shuffling of paper.

before i had realized it, i had fallen in love with the most beautiful boy.

he was my best friend.

even when he told me that everyone would be better off if i just “did it” already.

contradictions are the foundation of the human anatomy.

throughout my years at school, i learned that the human body is anatomically made up of 206 bones, we have 10 vital organs, and that sneezes exceed over 100 mph.

psychologically, i learned that pain never really fades. it doesn’t matter how deep your bottle vision is, or how much smoke you’ve engulfed yourself in. you’ll get your dose of cold, hard reality just yet.

but i also learned that we are rag dolls, stitched together with good intentions.

and that we are comprised of stars.

Leave me a voicemail.
Because when I miss you I’m going to want to hear your voice. 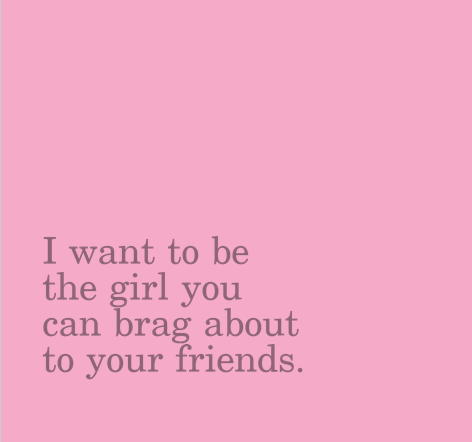 M45: The Pleiades Star Cluster - Perhaps the most famous star cluster on the sky, the Pleiades can be seen without binoculars from even the depths of a light-polluted city. Also known as the Seven Sisters and M45, the Pleiades is one of the brightest and closest open clusters. The Pleiades contains over 3000 stars, is about 400 light years away, and only 13 light years across. Quite evident in the above photograph are the blue reflection nebulae that surround the brighter cluster stars. Low mass, faint, brown dwarfs have also been found in the Pleiades. (via APOD) 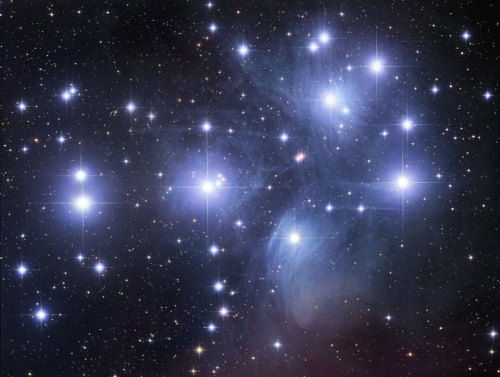 also, why don’t we start loving ourselves a little bit more, okay? we’re amazing. we’re all absolutely mindblowing from the molecular workings of our bodies to our ability to think and learn and create and we’re allowed to give ourselves a pat on the back every now and then. it’s all right. we need to stop calling each other prideful or arrogant every time one of us feels confident about something we’ve done. fuck that. we’re all beautiful. we’re all beautiful.

6 days left on this blog. 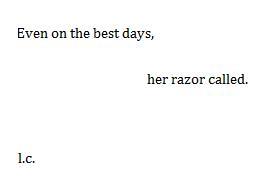