We looked inside some of the posts by perisaph and here's what we found interesting.

This came out nice looking besides the wings <.<

Keeping Up With The Todorokis: Season 2 featuring probably way too much Hawks 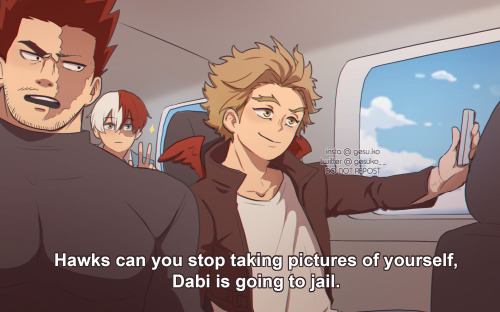 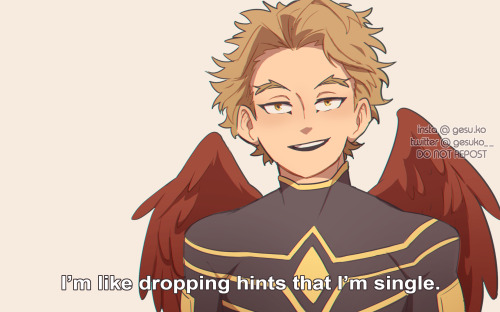 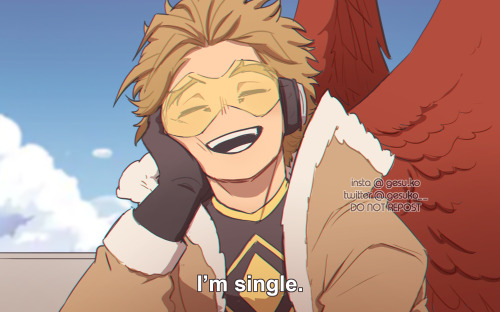 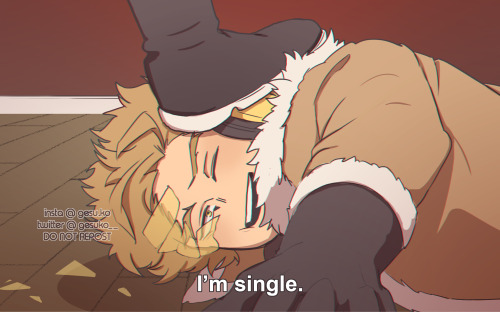 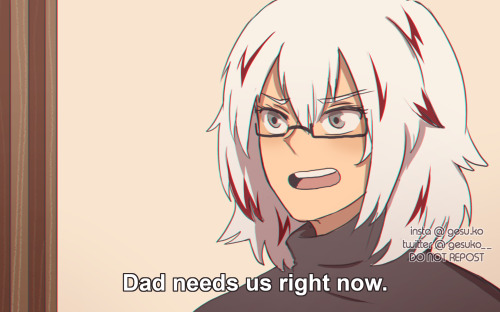 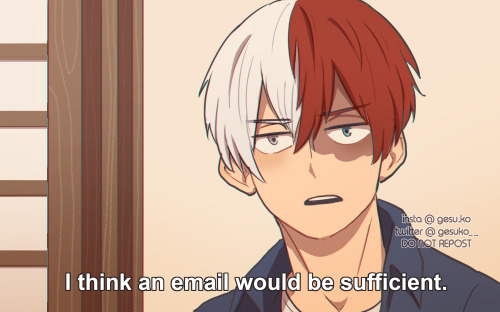 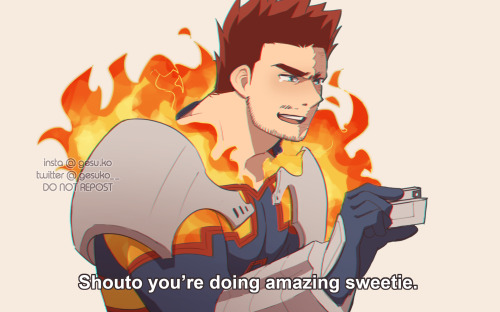 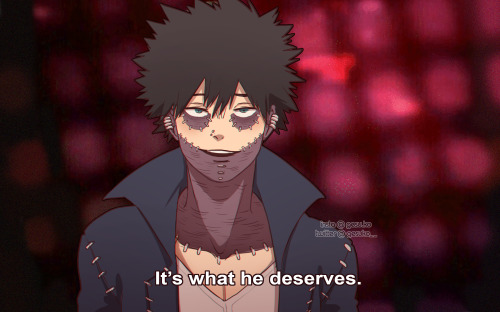 I did the Sixfanarts challenge! I really like how mine came out, but there has been so many cool looking ones from other artists out there. Over all it was fun trying this. 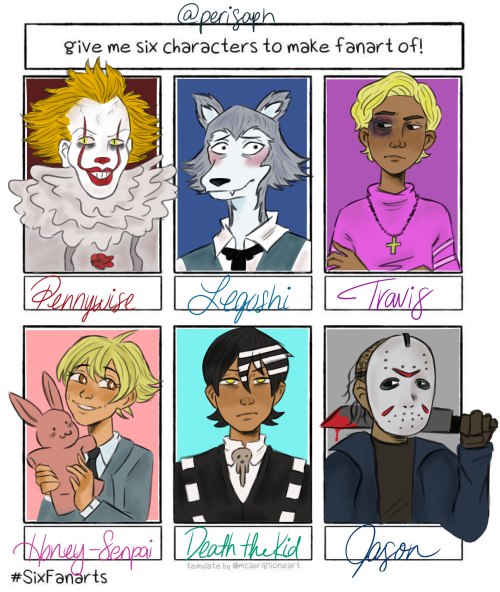 #sixfanarts, #pennywise, #IT, #it chapter two, #legoshi, #beastars, #Travis, #sally face travis, #sally face, #Ouran, #ouran host club, #ouran highschool host club, #ohshc, #honey-senpai, #soul eater, #death the kid, #friday the thirteenth, #jason voorhees, #jason vorhees art
81 notes · See All
perisaph·2 days agoAnswer
What kind of relationship do Richard and Seigi have? At first it seems like both of them have feelings for each other, but then every interaction has the no homo vibes in it, so I can't really figure out what to make out of their relationship

I knew that was coming after the latest episode, omg. This is gonna be long.

Okay, it looks like the anime is making a lot of people confused, so I’m gonna be as honest as possible here. The animators seem to be trying hard to adapt as much as possible from the novel, but… they’re clearly attempting to keep it overly neutral when it comes to the implications that Seigi and Richard might be in love with each other. It doesn’t feel like they have bad intentions (I’d say they’re actually just worried about the DVD sales), but it’s obvious to me that they’re trying to please all audiences. Ironically, I think the anime is going to fail because of that. The novel has a large fanbase and maybe the studio was counting on that to make the anime a success, but without the intensity of the books, the story becomes kinda boring, and without the emphasis on Seigi and Richard’s interactions (which offer in-between breaks so that the reader can stop and digest what’s happening), it turned out a little too fast-paced.

To give full context, the novels provide a lot (and I do mean a lot, you guys have literally no idea) of material for this ship and for the characters. They’re also way more intense in every single aspect and there’s usually more emotion between the two. Each chapter could make at least two episodes, and the contents usually touch upon the subject of “love” in many forms, which eventually comes back to Seigi and Richard and their karmic connection. Seigi is also a bit more childish and Richard is way less aloof in it, which makes them more endearing and their exchanges more humane.

Even in the smallest details, the novel brings the readers’ attention to their bond in a way that even people who don’t like BL wouldn’t be uncomfortable. It’s all just very natural and unpretentious, so if it were any other novel, I would say that there’s zero chance of them being a couple, but… the author of this one is woke as hell, so nobody can tell what she might do. The point is: there’s just so much of these two in the books, and most of it has been cut out in the anime. The essential scenes can’t be cut out, though, and they’re usually heavy and full of meaningful lines. That’s why the anime feels so close yet so far. You suddenly see Richard and Seigi talking about how much they like each other, but you haven’t really been shown how they got there in the first place. That’s bound to confuse the viewers.

Just to give an example of how hit-and-miss the anime is, at the point where the story is right now, Seigi was dreaming with Richard every night in the novel. In the dreams, it seemed like Richard was about to kiss him, so Seigi started asking himself if he had romantic feelings for Richard. And whether he is actually in love with Richard or not is the biggest debate of the novel, in my opinion. But leaving romance aside, Seigi does love Richard. He just doesn’t quite know what kind of love that is, and defining it is one of the most persistent difficulties for him.

To answer your question now, the novels are still on-going and there are many things happening in it even now in the ninth volume, so believe it or not, it’s still unclear where Seigi and Richard really stand. The story is super slow-burn and it highkey feels like a love story, so it’s come to a point where it sometimes seems more likely that they might indeed end up together than otherwise, but you can never be too sure. Still, the Japanese readers all agree that the story is about the two of them cherishing and protecting each other regardless of what their relationship is, rather than about whether it should be labeled as romantic or not. The only thing that seems clear enough is the fact Seigi sees Richard as more important to him than anyone and anything else, and is pretty desperate to make him happy.

TL;DR: Does Seigi love Richard? Very much. Is it in a romantic way? God, I wish we knew. 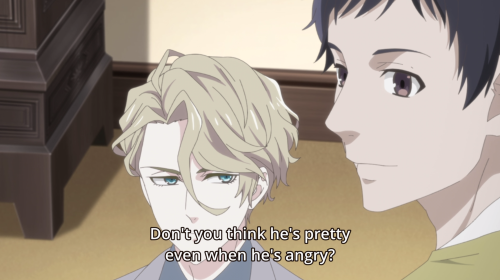 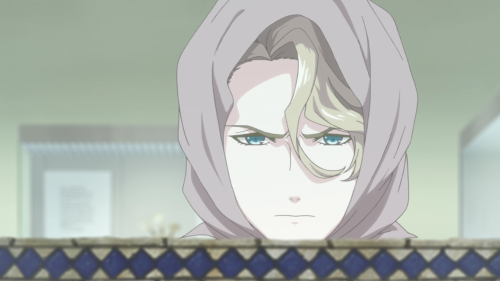 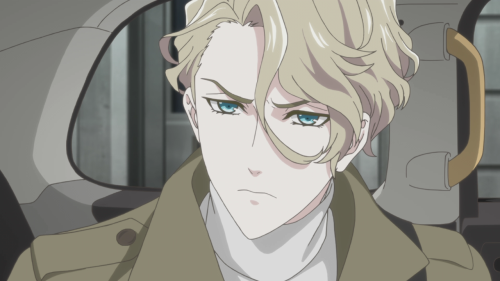 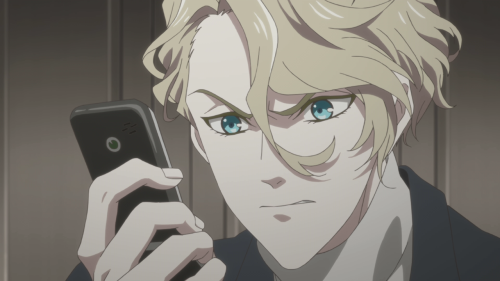 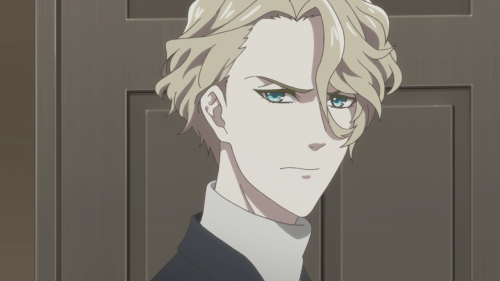 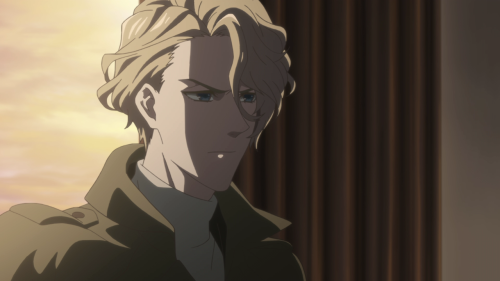 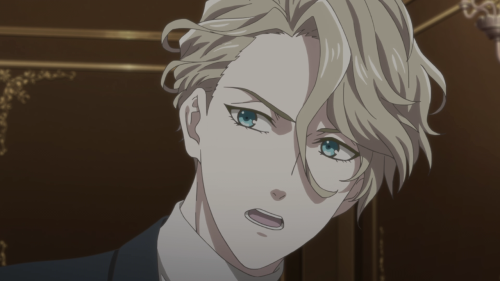 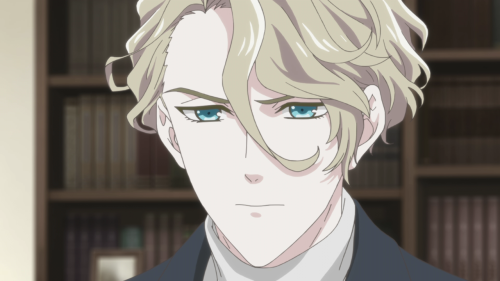 “When you left, I felt like a hole opened in my chest.”

Third years have a vice grip on my heart, as usual 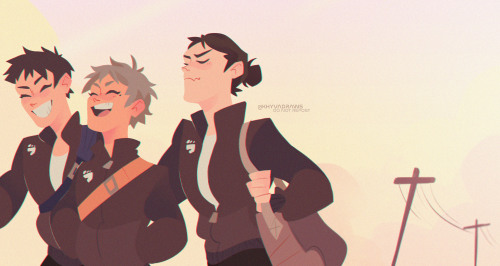 some bellow in these trying times? 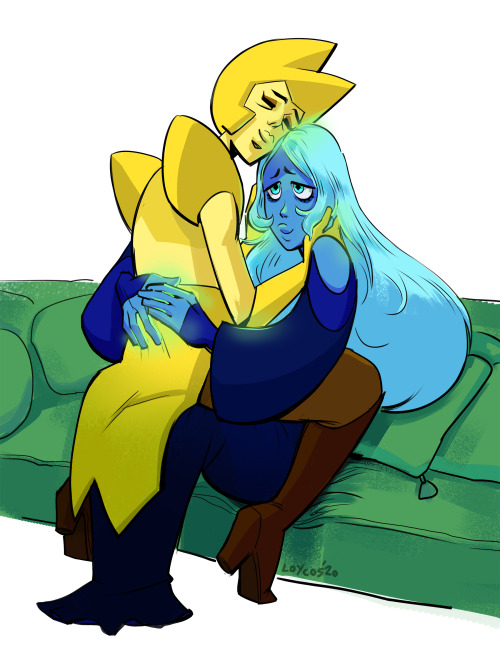 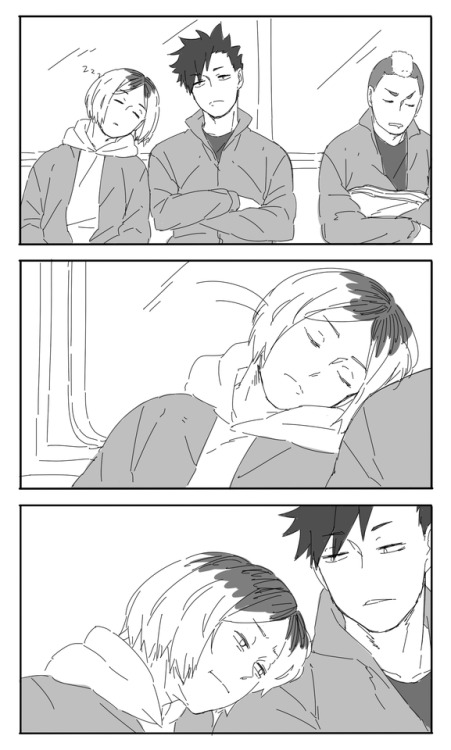 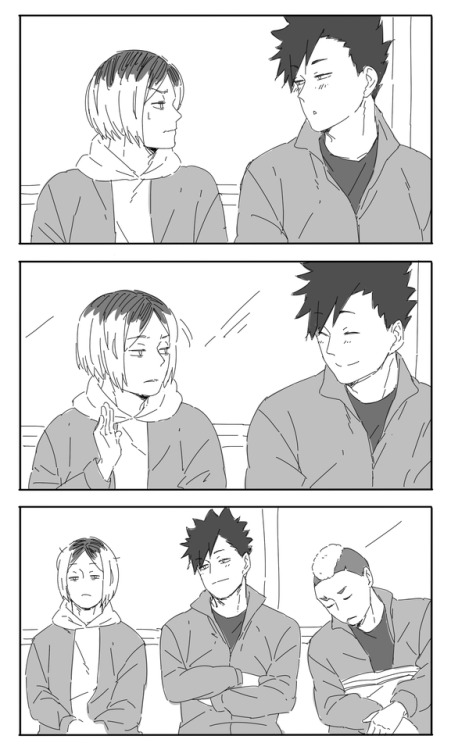 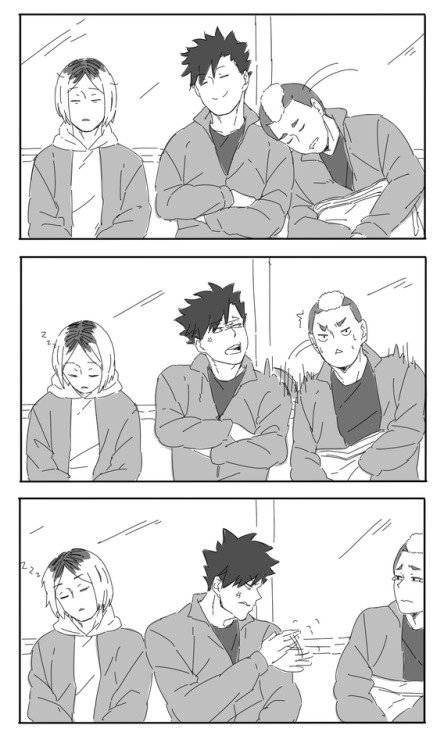 Here is a few of my favorite blondes

Arthur and Kenma look off but I don’t wanna fix it anymore >;( 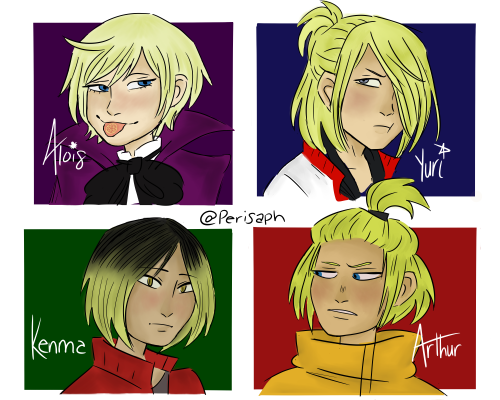 you’re not the only one pining Richie. Pay attention. 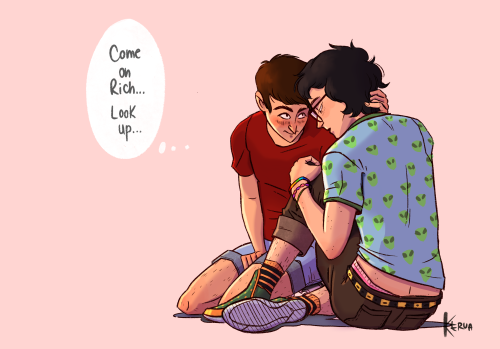 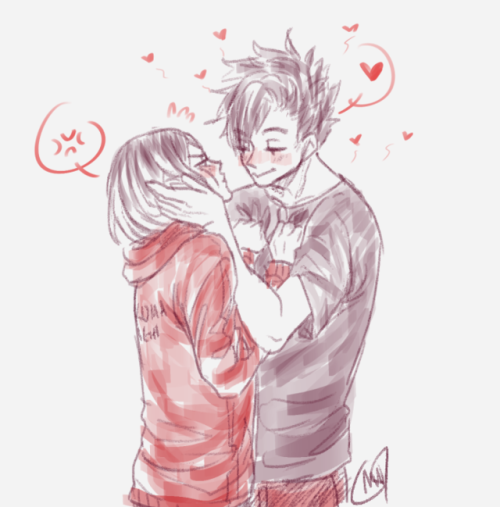 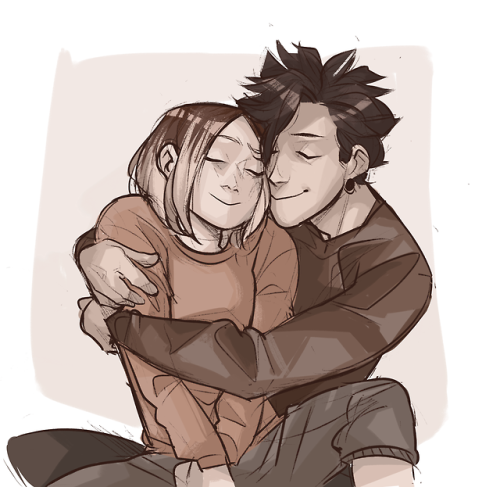 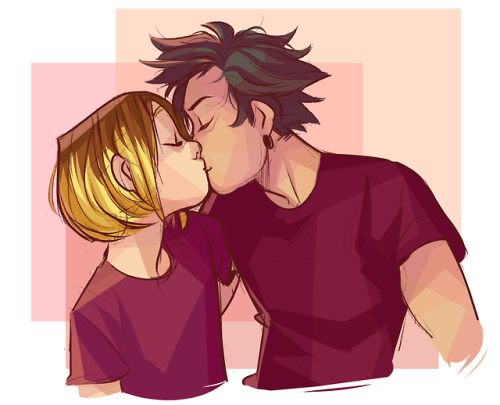 this was a great read. “Laziness Does Not Exist” by Devon Price