psycho-bookaholic
Bookaholic overly excited with books
"I'm scared." "That's the point of it, Bryce. Of life. To live, to love, knowing that it might all vanish tomorrow. It makes everything that much more precious" ~ Sarah J. Maas Crescent City
Explore Tagged Posts
Trending Blogs
Statistics
We looked inside some of the posts by psycho-bookaholic and here's what we found interesting.
Inside last 20 posts
Time between posts
575055.3571428572
Number of posts by type
Photo
1
Video
0
Audio
0
Text
13
Chat
0
Answer
0
Link
0
Quote
0
Fun Fact
40% of users visit Tumblr between 1 and 30 times a month.
psycho-bookaholic · 100 days ago
Text

Okey, so this is my booktok! Who’s rereading Acotar like crazy?

Hunt is not a Sam/ Chaol/Dorian/Tamlin

And I will say why I think so.

Taking the fact that the combo of wings + tattoos obviously.

“Both halves are as beautiful as the whole”

“Your scars? They are a testament to your fortitude. They are proof of what you survived. They’re not ugly. Far from it. They’re beautiful Poppy”

“There is no side of you that is not as beautiful as the other half. Not a single inch isn’t stunning. That was was true the first time I said it to you, and it is still the truth today and tomorrow”

“You are so incredibly beautiful when you’re angry”

“You’re beautiful when you’re quiet and somber, but when you laugh? You rival the sunrise”

“Unique and brave, intelligent and beautiful”

“Your scars are beautiful”

“You’re beautiful. Both halves, and you should never question why anyone would find you utterly, irrevocably, and distractingly beautiful”

“You look beautiful, Poppy. Absolutely… Am I seeing things or is that a dagger strapped to your thigh?… You’re an absolutely stunning, murderous little creature”

Hawke Flynn & Poppy from “From Blood and Ash!” I am so in love with Hawke…

I know everyone is being crazy about Cassian and Nesta, and Azriel after live that was yesterday, but can we please focus for moment at Feysand baby?!

I need that so badly. I hope Feyre will be pregnant in acosf or AT LEAST she will tell that she is in the end of the book.

Acosf is written in first or third pov?

Third – It’s between Cassian and Nesta. There were originally a few first person pov scenes from Feyre’s and Rhysand’s, but they added anything so she put them out and now they’re in bonus content for special editions.

What happened to it (Feyre/Rhys pov)?

There was like a scene from their pov that she liked to show, but the editor was asked why those scenes because it jumps from third point of view to first.

It was funny to Sarah to write from Nesta and Cassian’s point of view because it allowed her to see how other characters view Feyre and Rhys. Nesta and Rhys don’t get along that well so it was a cool way to see the world from other’s eyes. While she was writing Nesta’s scenes and how she was dealing with Rhys she was like “Oh my, she’s dealing with Rhys”. It was weird and inappropriate, because Rhys is in her head and he’s real to her.

Do you think people who doesn’t like Nesta will come out liking her more?

Sarah hopes they came out liking her. Nesta certainly has to face a lot of her behavior and that’s a big part of her journey – is like how she sees herself, like how she realizes how other people see her and deciding who she really wants to be and what the actions from the past have to dictate her future, can she change that? And the people who she treated badly - will they still willing to love her and open their arms to her?

The book is a healing journey in a lot of ways and self-reflection. Nesta is an asshole for a good chunk of the book. Sarah said she likes to write characters like that because it gives her so much more to explore and asking herself “why is she (Nesta) like that? Why did she act that way?”

- Sarah was sobbing in the end of the book. She has this story in mind even when Nesta was a side character, so a lot of her behavior earlier was about to make this journey.

- Nesta has her own journey to becoming an epic hero.

Ok so in Empire of Storms when Lorcan asks her about her love life it says “if she were to ever feel desire, it’d be a result of trusting someone so much those horrors faded away, a result of knowing they would fight tooth and claw to keep her free and never lock her up or hurt her or leave her” (377)

ARE YOU KIDDING ME???

He recognizes how she’d been abandoned, and he could not bare to be the last one who abandoned her. He saw her pain and felt it too, as he, even if he doesnt realize it, feels the same. He was hurt when Rowan abandoned him for Aelin and he is the same in that sense, that he could only love someone who would never leave him too. They are just absolutely perfect for each other and this part is so beautiful and AHHHH I just think this parallel is so good!!

The High Lady and The High Lord of The Night Court 🌙

So this was supposed to be just a sketch but I decided to give a little grey details AND AS A BIG FAN I REALLY DREAM ABOUT THIS HAPPENING
My beloved Feyre and Rhys expecting a baby! PS: this scene doesn’t happen in the books… at least not so far 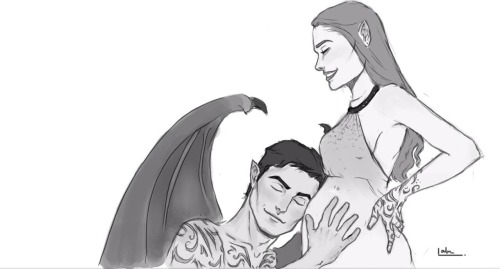 “ - I thought to myself, There’s someone I want guarding my back. There’s a friend I’d like to have. I think I have you such a hard time when we met up again because… because some part of me knew that, and was afraid of what it’d mean.”

I’m sooooo excited. I’m literally squeaking! I can’t wait for it. (And I hope Cassian is saying this)