Singing in the Dark

Podficcer, vidder, fic writer. Not accepting podfic commissions. Rhea314 @ AO3, Pi over on DW. If you want, my ko-fi is https://ko-fi.com/Y8Y59EEZ.

We looked inside some of the posts by rhea314 and here's what we found interesting.

Hikaru no Go | It’s my duty to take care of you. I replaced Yu Laoshi to shower you the care he never shared.

I’ve seen a few “Here’s how to support writers” posts, so here’s one for your friendly neighbourhood podfic people!

Podfic is more well-known these days, but in case you haven’t come across it: think of it as fan-made audiobooks for fic.

If you like podfic and would like to help the people who make it make more of it, here are a few easy tips and tricks:

How to support podficcers as a writer:

How to support podficcers as a listener:

In general, the more podfic-positive and responsive a fandom, the more podficcers will be attracted to it. So if you love podfic and would like there to be more… You know what you have to do :p

And if you’re new to the idea of podfic and don’t know where to start: There are more than 22,000 on AO3 right now, in a multitude of fandoms, ratings, lengths, voices and styles. You can usually stream them right on the page, and you can always download them to listen to later. It’s never been easier to have a fluffy ficlet keep you company while you do the dishes or to have someone tell you your favourite AU as a bedtime story.

And that’s it for me! Please share this post and feel free to add your own tips or ask questions if you have any. :D Thank you for reading!

A nice side effect of putting a blanket statement in your AO3 profile is that occasionally podfic just…happens. Like you’re going about your day and suddenly there is a podfic for u.

I’m happy to see resources for support for podfic, and not to sidetrack this post but I would also love to see more people making use of their AO3 profile. Mine lists where to find me on social media and also gives blanket permission for podfic, translations, and fanart, which allows other fans to create without having to negotiate with me first, which can be a bit intimidating. It also details my policy that I do not allow my work to be included in collections.

The problem is that not everyone knows to look in profiles because profile use is very limited, so I still get on average about two collection requests a week, and sometimes I get people asking permission to translate or podfic, or contacting me on tumblr to ask about my fanart policy. Which is fine, I don’t mind, but I would love for profiles to just be the standard place people look for that data so they don’t have to worry about reaching out and waiting for a response.

Make today the day you add a transformative works statement to your profile!

Get you a man who can do all three.

This is the best Leverage joke I’ve seen all year, thank you <3 Bless. 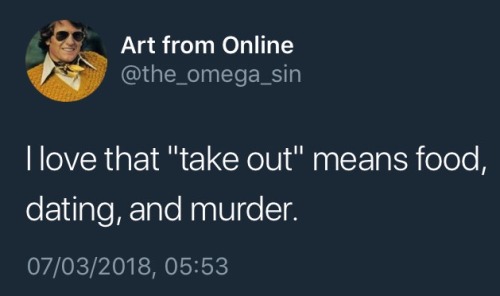 one moment of silence for Jiang Cheng 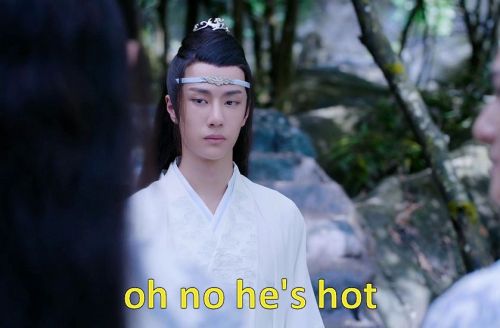 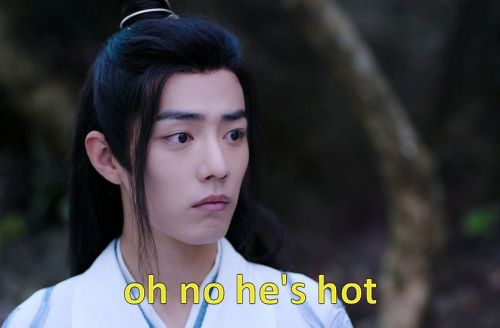 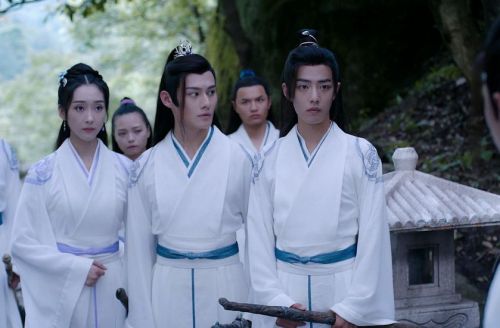 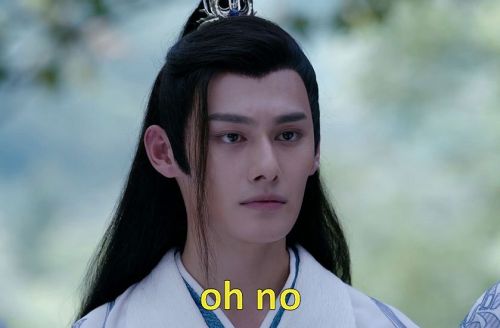 Summary: For the debt I owe, gotta sell my soul. Fanvid to Bury a Friend.

In the dog world, humans are elves that routinely live to be 500+ years old.

“They live so long…but the good ones still bond with us for our entire lives.”

Not gonna lie, this fucked me up a bit.

“Now I am old. The fur around my muzzle is grey and my joints ache when we walk together. Yet she remains unchanged, her hair still glossy, her skin still fresh, her step still sprightly. Time doesn’t touch her and yet I love her still.”

“For generations, he has guarded over my family. Since the days of my great-great-great-great-great-grandfather he has kept us safe. For so long we thought him immortal. But now I see differently, for just as my fur grows gray and my joints grow stiff, so too do his. He did not take in my children, but gave them away to his. I will be the last that he cares for. My only hope is that I am able to last until his final moments. The death of one of his kind is so rare. The ending of a life so long is such a tragedy. He has seen so much, he knows so much. I know he takes comfort in my presence. I only wish that I will be able to give him this comfort until the end.”

I’ve seen a lot of videos going around of urban-dwelling critters coming to humans for help with various problems, ranging from boxes stuck on their heads to young trapped down a storm drain, and it’s gotten me to thinking:

On the one hand, it’s kind of fascinating that they know to do that.

On the other hand, setting any questions of how this sort of behaviour must have arisen aside for the nonce, does it ever strike you how weird it is that we’ve got a whole collection of prey species whose basic problem-solving script ends with the step “if all else fails, go bother one of the local apex predators and maybe they’ll fix the problem for no reason”?

well, come to think of it, we’re at the top of the food chain but we almost exclusively hunt and kill prey out in the country.

raccoons and possums and foxes and crows all succeed in an urban environment because they’re opportunistic and observant. and almost none of them would have observed us pounce on one of their species and then start eating it, you know? a lot of them would have observed that we scream and chase them out of wherever we don’t want them to be, but other animals are territorial too. but there’s a number of situations where humans feed whoever’s bold enough to take them up on the offer, and we do tend to pull garbage off of other animals as soon as they slow down enough for us to catch. ‘a human got me but nothing bad happened’ is a much more frequent thing than ‘a human got me and tried to eat me’.

anyway like, we’re masters of our environment, we make weird shit happen all the time, we have lots of great food and sometimes we share, and we almost never eat someone. it makes sense for urban animals, over the last century or so, to just keep an eye out for opportunities to use us, and to pass the habit on to their kids.

It really is a weird, funny thing. Like yeah, technically they’re predators, and they get pretty screamy, especially if you try to take any of their stuff… but given the chance it seems like they’d rather help us out and sometimes they’ll just randomly give you food, so???

I mean, I guess in fairytales and myths we’ve got our fair share of stories about dangerous people/creatures who might well kill you or otherwise ruin your life, but to whom people nonetheless turn for help in desperate circumstances. So it’s not like the perspective is exactly a foreign thing to our own mindset, really… It’s just that, y’know, we can’t actually go make a deal with the faeries when there’s something we can’t figure out.

(Which brings me to an interesting thought about the ubiquitous rule about never eating the faery food lest you find yourself forever unsatisfied with anything in the human world - and the potential parallels to the dangers of feeding wildlife human food lest they become addicted and too tame and dependent to be safe for either themselves or us. Hmm.)

Okay, but that last bit with the Fae…makes almost perfect sense.

Of the stories I’ve read, the food of the Fae, its origins and effects, are often strange and/or obscure.- Just like our food to most animals.

The Fae are strange beings that seem to know weird things that give them power or an edge over us.- Just like us to animals.

The Fae work and live by strange rules also often nonsensical or obscure to us.- Just like us to animals.

The Fae can easily obtain vast amounts of things we consider rare/precious/desireable, and have no problem with dishing it out wantonly for no other reason than amusement.- Just like us to animals.

The Fae sometimes are amused by having us around, but only on their terms and IF it amuses/intrigues them.- Just like us to animals.

GUYS, I SENSE A PATTERN….

-they have arcane social conventions and the punishment for not paying the correct respects right is banishment, if you’re lucky, and death if you’re not.

-they have wild and unexpected parties where you’d least expect to find them, but if you’re bold enough to entertain them they’ll feed you and caress you and play with you all night.

-time runs strangely in their realm. their homes are summerlands: warm and bright, no matter the season. there is always fruit on their tables. but not everyone who comes in from the cold is let back out again.

-their games are cruel and complex and unfair, but if you can beat them by their own rules you will access riches beyond imagining.

-sometimes they just fucking fuck with you, the fuckheads.

-the price for pissing them off is always death. sometimes just you. sometimes your whole community.

-if you are very good, and very smart, and very brave, they will grant your wish.

My eyes just got wider and wider the further down I read.

OH!  Reblogging because this ties in very well with the tumblr post about how Dogs might see us as elves 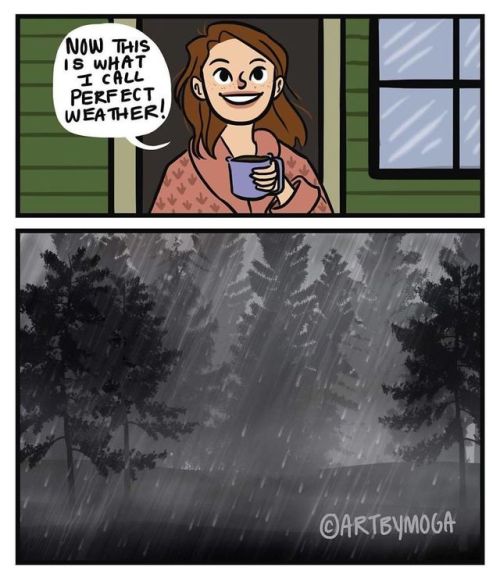 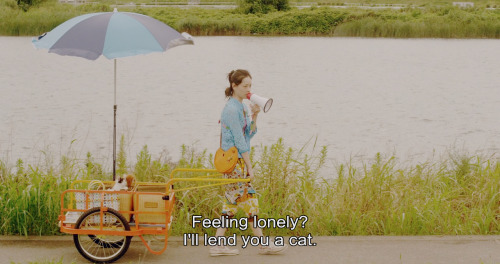 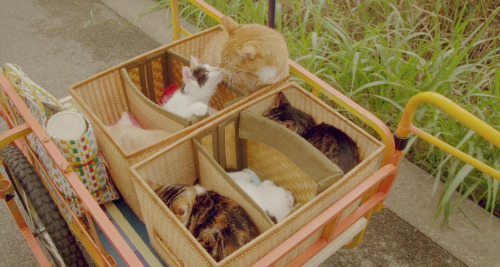 if golf and football switched commentators 😂

I just lost 3 years of my life

UNMUTE THIS OH MY GOD

This would immesurably improve both sports. 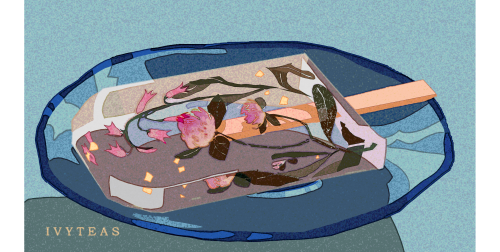 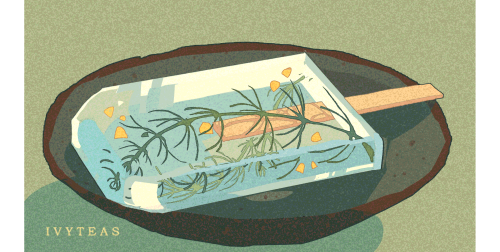 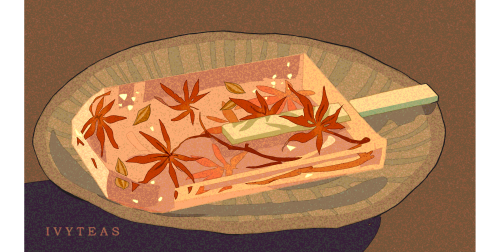 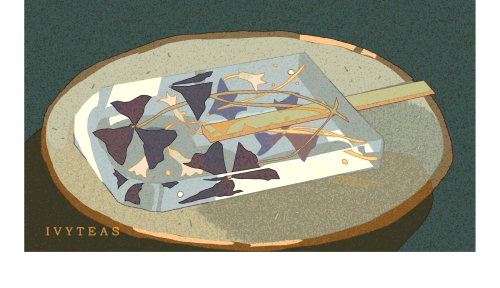 Your boss eyes the two of you, he seems nervous while he slightly shakes in fear. The two of you have been doing nothing but suspecting each other the entire time. Yet you haven’t even suspected the fact that,

Your boss is the anteater.

Jeff looks back at you suspiciously. Unbeknownst to you Jeff has the theory that you are an anteater. The spy vs spy-esque antics go on for 7 acts

I jist burst out laughing so hard holy shit 🤣

The multitalented Wang Yibo: Applause a new vid I premiered at Con.txt 2020 \o/

This is so wholesome

Update: he finally got the cat to the vet to see if she had a microchip

https://twitter.com/pariszarcilla?lang=en heres his twitter is here there is also additonal cat photos of his children.

CAT DAD IS BACK

This is, by far, the single most adorable fucking thing I have ever seen.

I’ve reblogged the earlier part of this thread before, and the new stuff makes it even better.

This is the Tumblr equivalent of a warm hug on a cold day.

I remember this thread, but I never saw the grown-up pics ❤

I saw Catdad for the first time today, and my day instantly became exponentially better.

CATDAD HAS REVIVED MY WILL TO LIVE

I live for cat dad-

Cat dad has saved us all 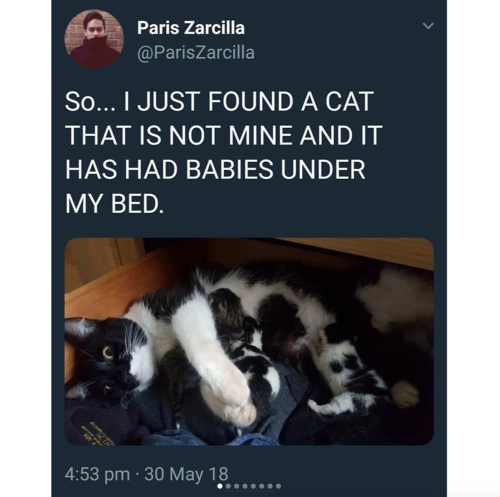 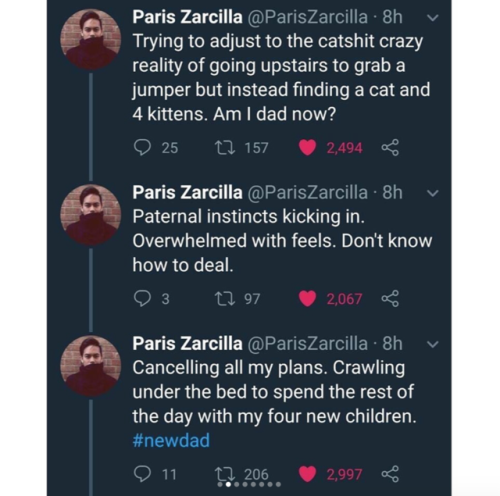 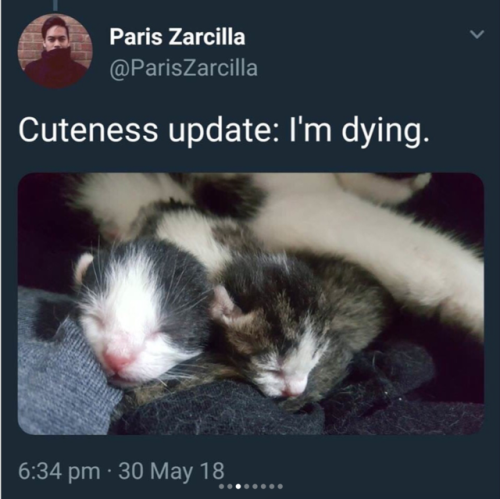 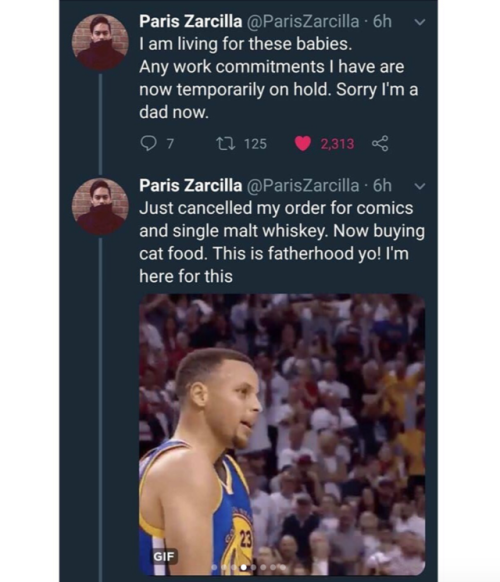 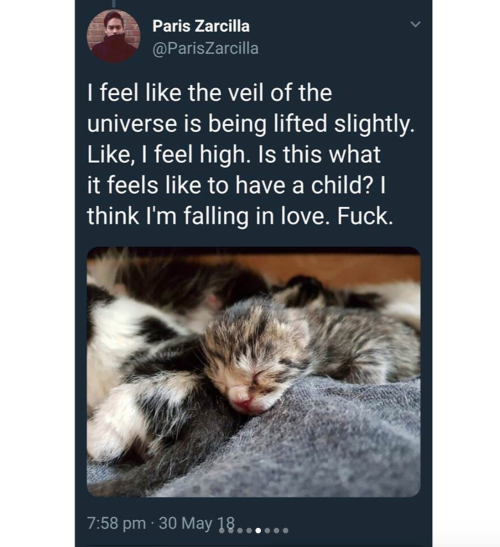 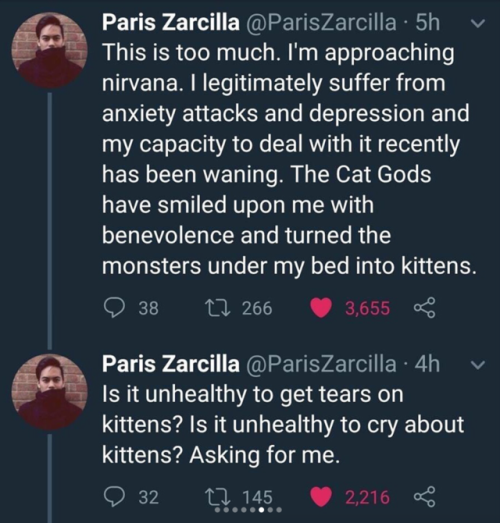 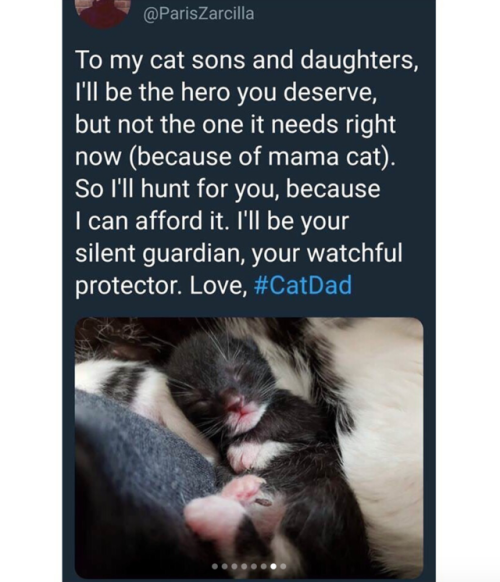 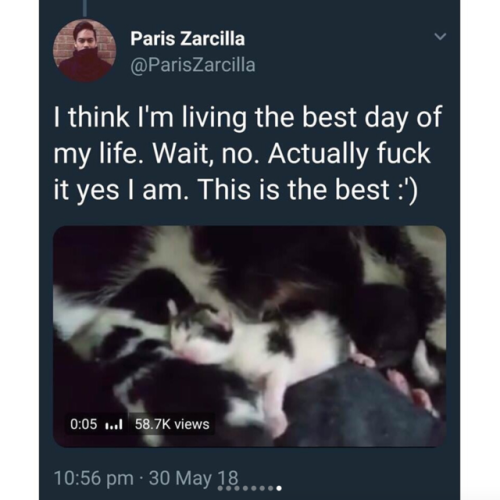