thoughts that occur to me

We looked inside some of the posts by rightonwoman and here's what we found interesting.

In an alternative universe, there’s a very sad episode of Star Trek where our heroes visit a planet where no one goes within 6ft of each other unless absolutely necessary, although no one remembers why. Spock, of course, discovers that they do it to protect themselves from a virus that has long since gone extinct. Our heroes try to convince these creatures to get closer to one another, they clearly want to, and it’s absolutely safe. But the aliens don’t listen, and our heroes learn a hard lesson. 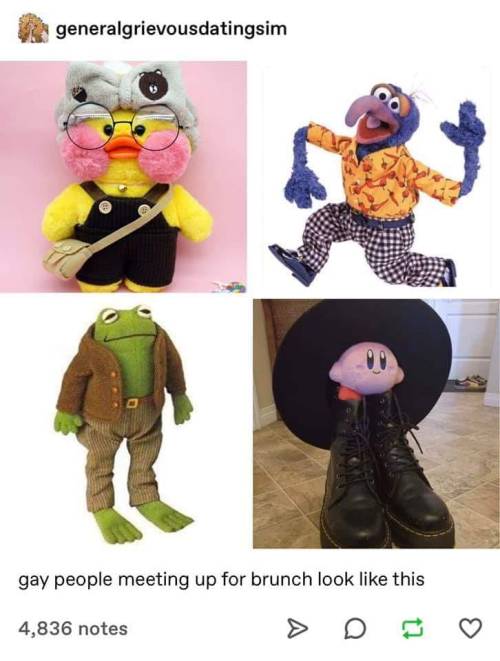 A Fitzgerald. I can pare it back but I like to indulge.

On a spectrum of Hugo to Hemingway, how concise are you?

Yes, but does your best buddy best pal write lovingly homoerotic descriptions of your face?

I noticed recently that something changed for me a long time ago.

When I was a teenager, I HATED standing at the stove stirring. I made “rice bowls” by cooking rice and vegetables in the rice cooker so I wouldn’t have to attend to a pot. And now?

I love that time, man. Standing at the stove stirring - albeit usually distracted by my phone — is so homey and cosy feeling. I love it.

Tip for if your mental illness makes it hard for you to eat, ESPECIALLY if you can’t eat because your executive function won’t let you go get food. cook, or even order take out?

There is no law against just biting into a cucumber and calling it a day.

Drizzle some ranch on there. You don’t even have to pour the ranch into a bowl and dip. Just dab some on eat bite.

Cut up bell peppers and dip them in hummus if you’re feeling fancy. Spread peanut butter on apple slices.

You are totally allowed to eat like a toddler if that will help you eat when you otherwise wouldn’t. That’s just what works for me.

When the moon hits your brow

Well, there’s jokes and then there’s jokes. If you had to defend your joke, it probably wasn’t a knock-knock joke. we’re talking about the kind of joke where you make an observation about real life and the audience laughs because they can relate, because you’ve made an accurate description of your shared world in a compelling, shocking, disruptive or jarring way.

(And that’s why people say they don’t like women comedians in general: because those people can’t empathize with a woman talking, can’t see things from her perspective, and therefore have no shared world. If you don’t see the same world, how is the audience is expected to AGREE WITH YOU aka laugh at your joke?

Ex. Wanda Syke’s detachable pussy set is saying, “hey, wouldn’t life be more convenient if we could make ourselves un-rapeable at will?” And while it wouldn’t solve all our problems, I’d gotta say I see the appeal.

A woman in the audience heckles a comedian, or boos at his joke, and he says to the audience, “wouldn’t it be funny if we were just to rape her, right now?” And the audience ACTUALLY LAUGHS? That comedian and that audience are saying “why yes, it would be an ironic juxtaposition if the woman complaining about your rape joke were to be then raped in retaliation, and we are okay finding her theoretical humiliation funny.” Which isn’t to say they’d allow it to happen, but it still sends a chill up your back.

Here’s a spiritual (crackpot) theory on where queerness comes from and what it is.

What if queerness means that no matter how I change myself, no matter who I’m trying to be, I only feel at home with other queer people - only with them, in relationship with them, do I feel whole and centred. Aligned with them — the queer people of the world!!!!

Queer: no matter how I change myself, no matter who I’m trying to be, I only feel at home with other queer people - only with them, in relationship with them, do I feel whole and centred. Aligned with them — the queer people of the world!!!! What if we feel each other’s pain because we are trying to heal the world. Queer energy is a global network of love and healing. We are all part of the magic, every one of us is on the same harmonic vibrational shift — THATS WHERE GAYDAR COMES FROM — some people can consciously detect it!

Don’t devour it. Savour this feeling! Enjoy your food.

I just want a woman’s lips on mine. My lips are a beacon, a magnet, calling out to all the other women-loving-women’s lips. My ovaries are the fuel - their unspent power amps up my queerness…

If you’re closeted, anything you have could be taken away from you from someone who outs you… it’s like your things don’t even belong to you because they can be taken away at any time.

I feel that I can no longer use the fact that I enjoy eating meat to justify all the suffering -the planet, animals, workers- that is necessary to put meat on my plate.

I can no longer justify the suffering of others.

Pfffft imagine if assigning homework was as easy as saying, “500 words on Sartre’s use of ‘thwarted desire’, Monday”, AS your students were leaving class AFTER the bell. Imagine studying Sartre. Imagine not checking to make sure we all knew what ‘thwarted’ meant. Imagine expecting to get anything back!

#homework, #teaching, #teacher, #sartre, #no exit, #the half of it, #netflix
7 notes · See All
rightonwoman·5 days agoText

Now, people think I’m nice to people because I’m confident, but the secret is, it’s because I’m fucked up and terrified they’ll reject me.

I want romance, goddamn it, I want to find someone to live in a wood-smoky cabin with in a bee loud glade

Never Have I Ever is a wonderful show and I’m enjoying every minute. BUT I can’t deny that the love story is the same as the one in The Mindy Project.

#never have i ever, #the mindy project, #netflix
0 notes · See All
rightonwoman·6 days agoText

Utopian ideals are an inexhaustible source of inspiration for how we can be better.

Schitt’s Creek could easily be any one of a number of horrible towns I’ve driven through or lived in.

Their riches-to-rags-to-riches story is the inverse of poor people becoming entrepreneurs. The Roses are sticking their tongue out, ignoring what the neighbours think, taking the risk.

While I was staying at my parents’ house, waiting out the pandemic, I started to feel like the world beyond our street didn’t exist. I felt like a little kid for whom the “outside world” doesn’t really exist yet. My world was made of just things of which I was personally aware.

And my imagination filled in the rest.