"Fear is an ever changing entity that we must conquer lest we be consumed by it."

We looked inside some of the posts by sebakor and here's what we found interesting.

The armor drawn over these concept models by fans are gorgeous. They strike me as more Roman influence and I love them.

The balmy air of the swamp wrapped around the small half-elf girl like a warm blanket. Despite its beauty the Feerrott was a dangerous place filled with varying kinds of beasts and monsters but all seemed to avoid the lone spot on which an old ruin sat with a large wooden house of iksar design and ancient dais sat.

The sounds of the other disciples echoed through the trees and muddied water, with one in particular standing out, the lone ogre known as Drok. Erin was crouched off to the side, her head resting upon her hand as she watched the massive eight foot tall brute battled against four of his fellows easily subduing them. She found it odd that he would be among this group as it looked like nothing could scare such an Adonis of strength and power.

She rose to her feet and bounced across the stone circle to the other end. Sitting alone, Sebakor sat quietly at the other end of the massive arena facing out into the swamp meditating. Erin stopped before reaching the iksar and shuffled up behind him peering around to see if he had noticed her.

“What is it child?” The iksar kept his eyes closed but knew full well the only one foolish enough to ever try to sneak up on him.


The girl jumped a bit at his question before remembering herself and giving and respectful bow. “Master I would like to know something. About the ogre…”

“Hmm. Sit.” Erin quickly sat next to him and imitated his posture. “What is it you wish to know?”

She hesitated a moment before looking back to Drok who was now sparring with a female kerran and losing. “Why is he here? I thought no ogre feared death.”

Sebakor took in a deep breath and seemed to have ignored the question presented to him. After a moment of silence he finally spoke. “Do you fear death young one?”

Erin blinked at him with a queer look on her face. “O-of course I do. That is why I am here.”

The Master cracked open and eye and looked down to her. “Is it? When you first came to me years ago it was not the fear of death I saw in your eyes.”

Erin’s eyes widened with sudden realization. No it wasn’t the fear of death. As a child born of two worlds, shunned by one and berated by another, she was afraid that she had no place in this world. When she found her master, she was battered and broken but would rather have died than exist in a world where she didn’t belong.

“Each of you has come to me to learn how to master that which you fear most inside you. For ogres falling in battle is more important to them than life itself. What they fear most is dying feeble and old. Drok fears such an outcome so much, he has sought my guidance so that he may gain power and perish in battle among his brothers and sisters.”

The half-elf nodded in understanding despite feeling she did not fully grasp this new concept. She looked among the many races gathered around and wondered what drove each one of them to be here.

“What about you master? What do you fear the most?” She looked up to him in eager anticipation of his answer.

Sebakor opened his eyes slowly and stared out into the bayou. “That is a story best left for another time.”

Erin scrunched her nose in disappointment. “That’s not fair.”

The iksar rose to his feet and looked down to his apprentice. “Life never is.”

With a flick of his tail, the master strode back to the sparring students leaving Erin to ponder his lesson.

“Fool! The strong are not fearless! They harness its power and use it to make their enemies cower before them!” The Iksar’s brow twitched with irritation as one of his more headstrong disciples brandished a weapon before him.

“That is just a coward’s excuse. I fear nothing! Not even you Master!” The young human slashed his falchion several times in front of him deftly. He had been trained over many years to be proficient in many forms of combat by the man who stood before him. His eyes never betrayed a hint of fear.

The iksar’s hands were clasped behind him, tail flicking in the air, legs together straight as an arrow. He stood solid and tall like a mountain refusing to bend to the will of the pounding winds. A sneer crossed his scaly lips as he watched years of training wasted on nothing but a worthless windbag who never grasped his teachings.

“Theron, you were one of my best and you could have surpassed even myself, but you have failed in learning the ‘true’ meaning of fear.” He looked to his students that encircled him, the dozen or so men and women of all races staring at him with a mixture of dread and awe. Though he had a particular distaste for most races, being softer and weaker than your average sentient reptilian, he trained them regardless.

A smile crossed Theron’s face as he watched the master look to the others. “Seeking help from the others? Do you fear me enough to look to them for help?”

“Master Broketail?” Sebakor raised his hand to silence a young female half-elf that sat at the edge of the ringed platform.

The iksar snapped his head to the insolent man before him. Theron took a half-stepped back nearly stumbling on the uneven stone floor. He shook his head clear and lunged at the reptilian man before him, quickly and nimbly cutting through the air. Though he wasted no movements and struck with the skill of a seasoned warrior all his effort were mute as all his swords edge found was empty space. The iksar had not moved an inch and had simply leaned out of the way of each attack. “Graah! Fight me coward!”

Theron thrusted forward with great speed and ferocity. Sebakor casually parried the sword with his hand and grabbed the man by the throat, lifting him into the air. The sword clamored as it landed on the stone floor. Theron wriggled about trying to free himself from his master’s grasp. “L-let me go!”

“Now my students, watch closely as I show Theron the ‘true’ meaning of fear.”

Theron’s face went pale at the sight before him. He could see what looked like a dark shadow rising before him, and enveloping the scaled one. The piercing gaze burned into him and his once strong boisterous voice escaped him. It felt as if he was being swallowed up by the shadowy ocean the rose before him.

Sebakor shifted his feet slowly as he drew back his arm. A swirly mass of shadowy fire coalesced around his clenched fist. Theron squirmed even harder than before. “N-nooo!”

Theron suddenly felt the ground beneath his feet as relief washed over him. He looked up just in time for the horror to return. The students gasped as they heard the sickening impact of Sebakor’s fist burying itself in the young man’s chest. The boy ricocheted off a nearby ruined column before finally collapsing to the ground a crumpled mess. He lied there with his chest open and charred.

“Do not worry my students. He was dead long before he hit struck the column.” The shadows dissipated as quickly as they had appeared. He turned away from the smoldering Theron and peered out into the Feerrott through a ruined archway.

An ogre who sat off to the side raised his hand gingerly, the giant man sat nearly as tall as the iksar stood. . “M-master. Do you ever experience fear?” He inquired with a look of apprehension mixed with terror on his face as he glanced between Theron and Sebakor.

The Master turned to his student and smiled. “Always.”

A playlist I created for Sebakor. Mostly just music from Two Steps from Hell, John Dreamer and more music of the like. Trying to add more darker pieces to the mix.

A fitting start to my Tumblr page devoted to my Iksar I am creating for EverQuest Next.

I commissioned this piece from johnhawkens based on the Original EQ design before the concept art was revealed and it turned out fantastic. 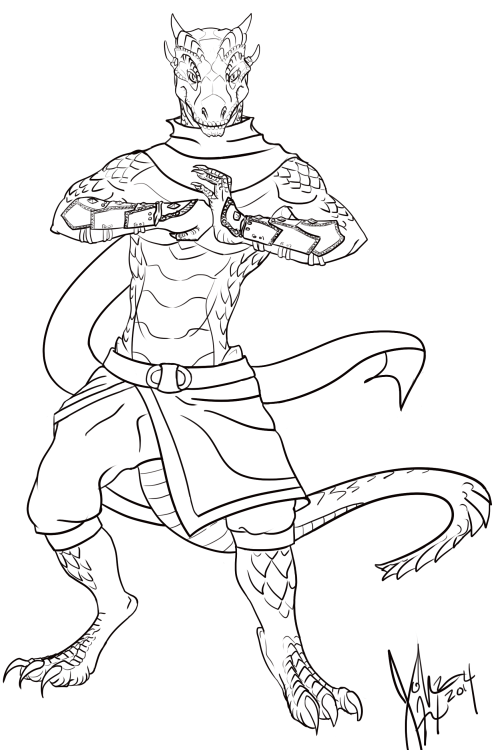