secretmellowblog
Mellow Blog
I'm Mellow (21, white lesbian, she/they) and I draw daily cats! My redbubble is https://www.redbubble.com/people/MellowArtStuff/shop
Explore Tagged Posts
Trending Blogs
Statistics
We looked inside some of the posts by secretmellowblog and here's what we found interesting.
Inside last 20 posts
Time between posts
9044.15
Number of posts by type
Photo
3
Video
3
Audio
0
Text
12
Chat
0
Answer
2
Link
0
Quote
0
Fun Fact
Tumblr has over 100 million blogs, and only 167 employees.
secretmellowblog · 12 days ago
Answer

no “carrd.” you learn things about me based on what you can piece together from the vague details of my life I disclose in rare moments of vulnerability

The defund the police crowd is quick to argue, in polite company, that they don’t really mean defund the police. The furries expose the falsity of that deceptive claim. Cloaked by the anonymity of their costumed Twitter identities, the furries are free to speak plainly about their beliefs. (…) 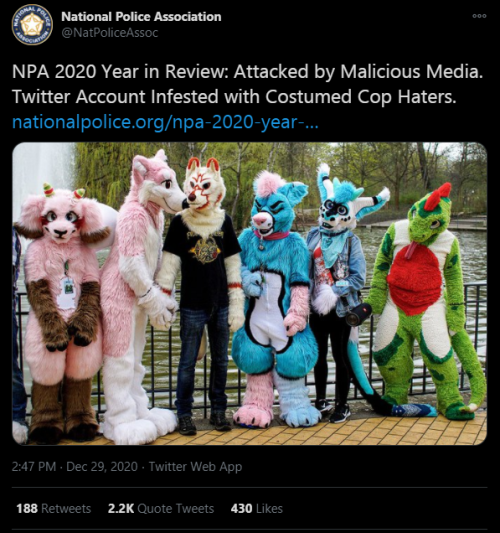 Wait, can you elaborate on the "Hugo knew how to make a fandom, so this isn't an accident" comment? did he really or were you just joking?

No I meant that ! And I can try to elaborate !

..I already know this will run long so

#ahhhhh this is all so fascinating!!!!!!!!!#it also reminds me of like#the 'cults of personality' that develop around big name fans and stuff#in the modern day on twitter/tumblr/etc#but yeah hugo's attitude towards fandom was really cool
117 notes
secretmellowblog · 12 days ago
Text

i love it when ppl r like “stop over analyzing everything about insert piece of media here!! can’t you just have fun!” like i am. this is my fun babey. if i’m not dissecting the psyche of my favorite characters until i know the minutiae of their mind or if i’m not discussing the MeaningTM of the blue curtains and how actually they’re v important 4 worldbuilding then i don’t want it! leaf me olone with my long character analyses that are 75% projection 25% headcanon 100% good shit and my detailed list of every article of clothing that ever showed on the screen thank u

Anyway tumblr isn’t a news site and if you think it’s like a moral failing or something to not Exclusively reblog shit about Important, Often Horrifying Things that’s um. Weird

#yeeee :(#its hard for me to remember this sometimes lol
10K notes
secretmellowblog · 12 days ago
Text

When I was younger, I was always fascinated by how people living through major events throughout history were always so focused on their day to day lives. When I read diaries and primary sources, people would be talking about huge events with worldwide significance but they would just be…living their lives. Like COME ON a world war is happening and your main area of focus is how the rationing sucks and how you want to go to dances and stuff after All This Is Over?

But I get it now.

hierarchy of needs in any piece of media

#replace 'toxic masculinity' with 'police violence'#and this is a lot of javert fandom lol#not to be salty lol XD
29K notes
secretmellowblog · 13 days ago
Video
#the hobbit#lord of the rings#ive learned how to use basic photoshop animation#and im abusing that power at every opportunity#but yeah i realized id drawn multiple hobbit hole backgrounds and could make a Thing!#(skldfjskfs sorry im spamming today lol)#the hobbit comic#retelling the hobbit
100 notes
secretmellowblog · 13 days ago
Photo

As long as Im kinda tooting my own horn here’s a before/after of page 9!  :3  Which was one of my favorites to draw 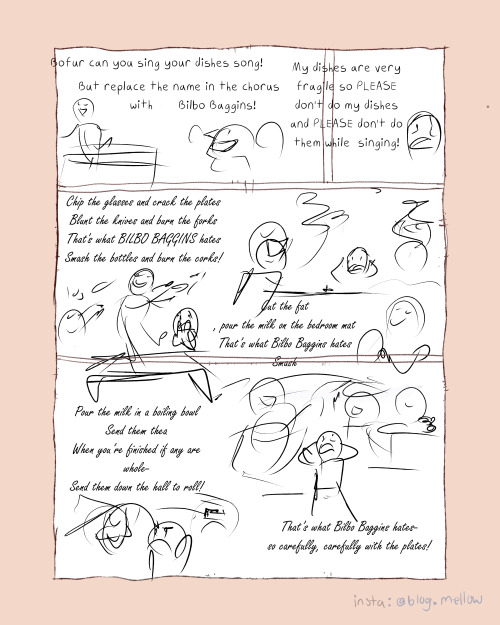 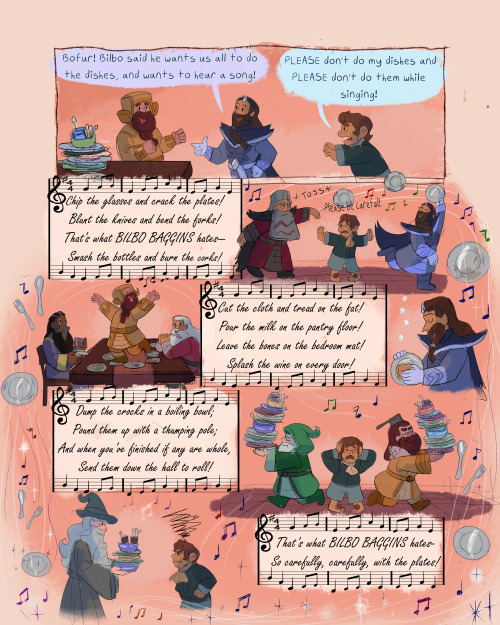 #asdfsfdsf comics take hours to draw so i feel like i get to a LITTLe bit annoying about it#going into this chapter i had no idea if I *could* draw any kind of song sequence#and was considering cutting it#because i didn't know how to do it#but then i tried anyway!#and a lot of people commented that they like how I handled it and ah! yay! validation!!!!!#thank you!#tho my favorite thing about this page is Gandalf making the :3 face
24 notes
secretmellowblog · 14 days ago
Photo

I love seeing other people’s wip stuff so….here are some before and after Wips from the last chapter :) 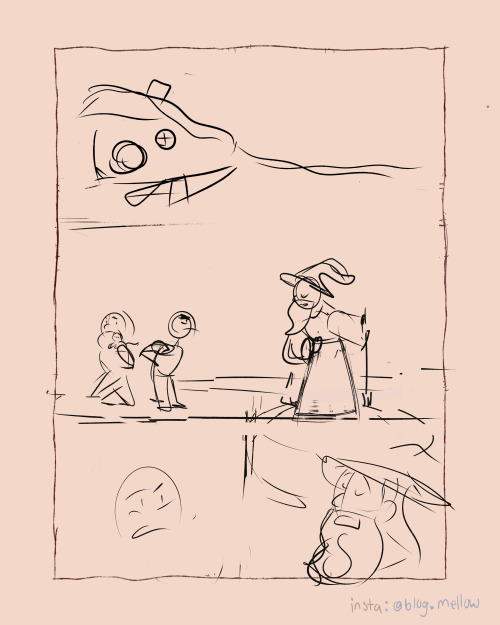 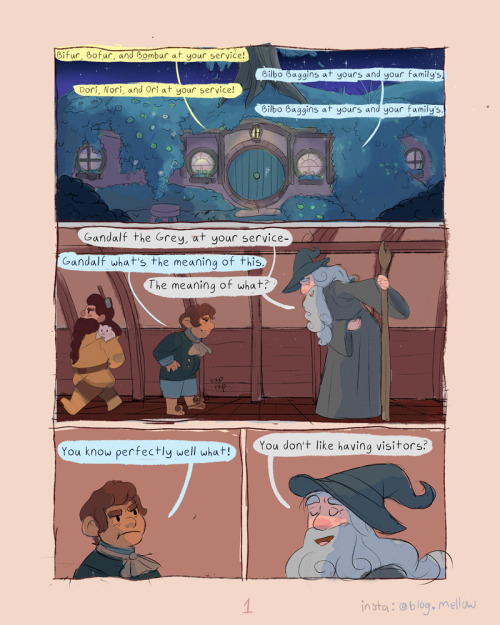 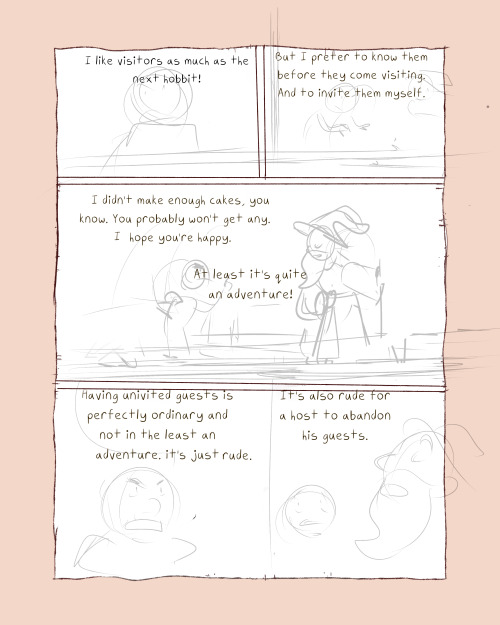 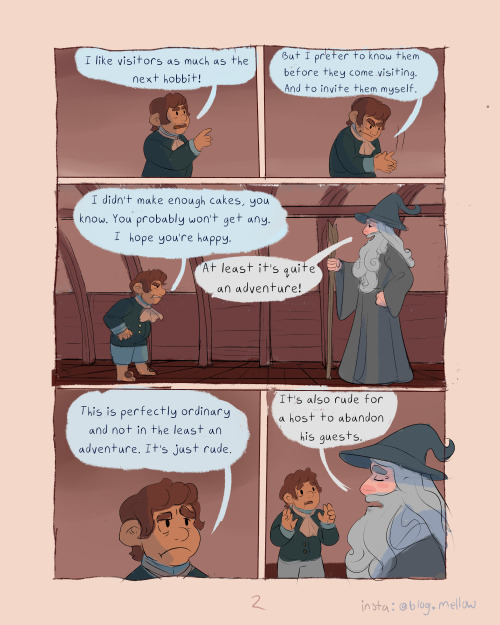 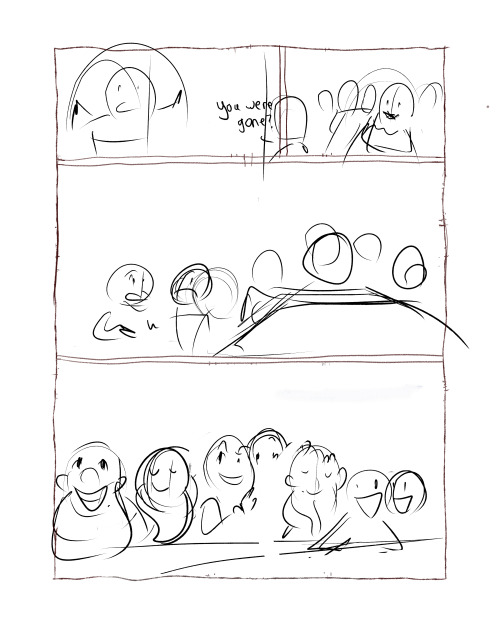 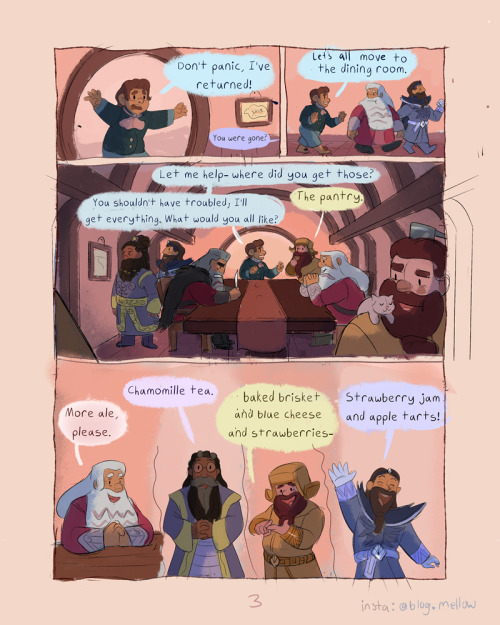 I’m late to post about the Sea Shanty craze, but my Go-To Shanty is currently “Leave her Johnny” (which I’ve been listening to on repeat)

the memes were right, shanties do give u motivation

#shanties and folk songs!#i already was listening to folk songs#since I have a playlist inspired by the Hobbit (which i sometimes listen to while drawing the comic)#and that has a few folk songs I like on it#but like....ye#also I found the absolute Perfect song for Bilbo and Thorin's relationship........#not sure if i should post it before or after the next chapter#(which I might actually finish in the next few days!!!)#(because folk songs have been distracting me enough to make me focus on things)#(lol)
47 notes
secretmellowblog · 34 days ago
Text

Also thanks to people who send me asks even when I don’t respond or take a million years to respond! *finger guns*

Ahhh I just wanted to say thank you for all the nice comments and stuff you left on the last chapter of the hobbit comic!!!!! (I’ve been meaning to go and respond to all of them individually but it’s been Hard to Focus Lately What With Everything lol, I’ll probably do it soon!)  <33333333333333333333333

#I like. read all the comments the moment they show up basically#but it takes me a while to respond because i overthinkit!#anyway#yeah i really do read and appreciate all comments and tags and stuff#it was like. weird timing to post a chapter of a silly comic tho#right before an attempted coup!#like.........weird#:/#anyway yeah igotta catch up internet communication stuff ive fallen behind on haha#lsdfdslkfs
24 notes
secretmellowblog · 38 days ago
Text

i think some people on here could do with remembering that not everyone’s media taste is solely represented by what they reblog content about on tumblr & less “fandom-viable” works getting less traction on what is basically a very fandom-centric platform does not inherently mean that people are ignoring that kind of media in general or that they only care about blank slate works with shippable white men or whatever. it’s like walking into a mcdonalds and assuming that everybody there hates salad because they are currently eating fast food in a fast food restaurant

girl help there is not enough enrichment in my enclosure