simpfortheseven
Simp For the Seven Rulers of Hell
||Writer for Obey Me! Shall we Date?||REQUESTS see my masterlist|| Warning: some NSFW||
Explore Tagged Posts
Trending Blogs
Statistics
We looked inside some of the posts by simpfortheseven and here's what we found interesting.
Inside last 20 posts
Time between posts
36135.95
Number of posts by type
Photo
1
Video
0
Audio
0
Text
17
Chat
0
Answer
2
Link
0
Quote
0
Fun Fact
The name Tumblr is derived from "Tumblelogs", which were hand coded multimedia blogs.
simpfortheseven · 6 days ago
Answer

Sure thing! First time writing for dis boi so I hope I did everything correctly jsjsbdb

The both of you were taken aback by the words you just blurted out, and you felt his hand freeze on your cheek.

Every second your face became redder and redder, but you couldn’t help but be embarrassed, after all, this wasn’t how you’d imagined that you’d confess to him! You thought it would be under a beautiful tree, with lights shining all around you like stars, and you’d hold him and tell him how much he meant to you, how much you loved him.

But instead it was in the House of Lamentation’s kitchen, the two of you with dirty aprons on and you covered from head to toe in flour. Not exactly how you imagined it.

You didn’t understand what came over you, suddenly saying your feelings out loud like that. You were both just baking, having fun, and then all of a sudden Barbatos mentioned you had a bit of flour on your face, and before you could say anything else his hand was gently touching your cheek, trying to clean you up a bit, and you said you liked him.

The silence got louder and louder, as the demon in front of you looked at you with a slight blush in his face, and mean while, you trying to look at anywhere that wasn’t him. Finally, his hand dropped to his side and you gasped, afraid of what he was going to do next.

You blinked up at him, wondering if you were dreaming, but he was smiling. The type of smile that reached his eyes and made his cheeks flush.

“B….Barbatos?” You shyly murmured, and the demon only chuckled. You blushed a but more, and he placed a hand under your chin, making you look up at him.

“Sorry, sorry. I wasn’t laughing at you. I was just taken a bit by surprise, that’s all.”

He raised an eyebrow. “No, why would I be? I’m elated right now.”

“I like you too Y/N” he smiled, and leaned closer to you, making you turn red.

“Yes, for a while now, I’ve been wanting to tell you.”

“I wanted to wait till you were ready. Although I have to admit that at some points I was about to act rashly and confess, I just couldn’t hold back any longer.”

Barbatos smirked and pulled you close. “From this.” He whispered, and you let out a gasp as you felt his lips against yours.

Barbatos had wrapped an arm around your waist and was lifting your chin up with his other hand, while you wrapped your arms around his neck.

The kiss had started out soft, almost shy, but soon the two of you were aching to feel each other more. Barbatos kissed you roughly, pushing you against the kitchen counter, kissing your neck, your chest, and back to your lips again.

The kisses soon became more and more needy, as if you just couldn’t get enough of each other. You were running your fingers through his hair, and he chuckled and pulled you closer. You let out a muffled moan as his leg went between yours, his hand massaging and touching every part of your body. When you pulled away you were left panting, but before you could catch your breath your lips would lock again and you’d be kissing each other desperately.

You started taking of your aprons and shirts, not caring about anyone or anything, until,

“Oi what are you two doin’ in there?! The cake should be ready by now shouldn’t it?! Barbatos you’d better not be-”

“Mammon, stop yelling. You’re only making me hungrier. Especially by mentioning the cake…” A loud growl was heard through the door.

You both pulled away immediately, and just in time, as the two demon brothers opened the kitchen doors and walked inside.

You started mixing the batter, trying to look as if you had been busy, and from the corner of your eye you could see Barbatos glaring at Mammon and probably planning to chuck something at his head again for interrupting.

“Mammon! We were almost done, uh, we couldn’t find the tray for us to put the cake batter in.” You said, and Mammon raised an eyebrow and pointed next to you.

“Oh! Well…yes would you look at that! Silly me, how could I forget. Anyway now we- BEELZEBUB!”

You had only looked away for a couple of seconds when the whole mixture was gone, and beside you, the culprit was standing there covered in it. He looked up at you guiltily.

“Mhmm, sowhy guys, I jusht- mmmm- couldn’t help myshelf. Mmm this is- this is amashing.”

After scolding Beel for eating the whole thing, you all decided to call it a day and go to your rooms, since it was pretty late to start all over again. Barbatos offered to clean, and you wanted to stay to help too, but Mammon started dragging you to leave.

Thankfully, before you left, Barbatos grabbed your hand and whispered something in your ear.

“Wait for me in your room, we’ll continue this later.”

You turned red and he smirked.

“Barbatos what’re you standin’ so close to them for?!” Mammon glared, but Barbatos only chuckled and ran a finger down your cheek, smiling Innocently at Mammon.

“They had flour on their face.”

As you left and waved goodbye, you turned and saw Barbatos smirking at you, licking his finger, and you felt yourself shudder at the gesture.

You couldn’t wait to see him again.

I JUST WOKE UP TO 4 SUbMISSIONS HOLY COW-

ive never had that many at one time

“You’re overthinking– I’m yours. That’s all I want to be.” with Levi pretty please?

Ofc!!! This works so well for him-

The third eldest of the seven brothers you had come to love was, without a doubt, a little shy. The way he stuttered, blushed, and seemed nervous around you still after all these months brought you to the conclusion that Levi was in fact shy.

And with that shyness came the self doubt.

He constantly put himself down, talking about how he was gross and yucky. It made your heart swell with sadness when you heard him speak like that.

So what better to do than to give him a gift?

You had found the cutest Ruri Chan stickers online, as well as his favorite soda and snacks to consume while gaming. You went to his room, finding him in the usual spot you two cuddled.

“y/n?” he looked up at you from his switch. “Whats that in your hands?”

“For you,” you set it down in his lap. He looked up at you, tilting his head and then opening it. The look on uis face was worth all the extra hours at Hell’s Kitchen. He started gushing, saying how detailed and perfect the stickers were.

“I can’t believe they even got her hair style so detailed! it’s incredible!” He smiled up at you, but then his smile fell. “Why would you get these for a yucky otaku like me?”

“Because I love you,” You kissed his forehead.

“Why? I’m a gross stinky Otaku, maybe not as bad as my scumbag of an older brother but-”

“You’re overthinking, Levi,” You took his hands, looking him in the eye. “I"I yours. That’s all I want to be. And to me that means getting you things that will make you happy,”

He blushed, smiling softly as he leaned against your shoulder. “Alright, y/n. Thank you,”

Barbatos: Out of all of us here, I’m the most ideal husband.

Michael: *raises an eyebrow* And why?

Barbatos: I can cook. I can clean. I have manners. I am a switch. I’m sexy. I can visit timelines. And MC is drooling whenever I pass by.

please consider.
mammon being the main sibling who raised satan.

satan has just spawned into existence, everyone’s still grieving. lucifer has fully immersed himself in his work. levi is in self isolation under the sea. asmo is indulging in his sin to cope. beel and belph are inconsolable.
mammon is hurting too but he hates sitting around moping. so who better to look after a tiny ball of rage.

he has the most amount of patience and doesn’t lash out when things get physical.

not the best at raising a kid but he’s trying.

(( asmo eventually comes around to help too once he’s confident his hair wont get ripped out.)) 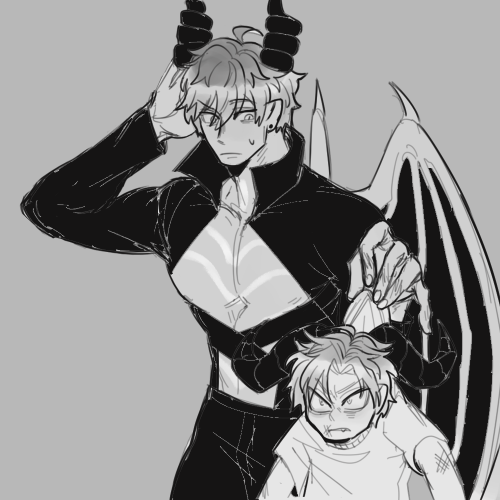 bc i need inspiration

send a sentence and a name!! x

opening requests for these! Ill use “#Simpfortheseven Soft Sentences” to tag them as well! go ahead and send one in!

Alrighty, seeing as how the community has been recently and how I’ve gained a large influx of followers (thank you all by the way!) I would just like to say that my blog supports the LGBTQ+ community, trans people, non-binary people, genderfluid people, people with disabilities, people of color, people of all body types, people with mental illnesses, pretty much anybody.

I will NOT support transphobia, homophobia, racism, ableism, body-shaming, etc. you get the gist.

So if you have a problem with that, please feel free to hit the unfollow button, and even block me if you must! There’s a space for everyone on social media, and if this space is not for you, there’s plenty others for you to find!

This has been an Obae-Me Blog PSA!

bc i need inspiration

send a sentence and a name!! x

opening requests for these! Ill use “#Simpfortheseven Soft Sentences” to tag them as well! go ahead and send one in!

I feel like my body is trying to slowly murder me- I feel like im being stabbed in multiple places in my abdomen ;-;

THIS SOUNDS SO CUTE-

Okay now this is adorable but…

Do you see this precious wholesome Luci watching his little brothers, happy that they’re happy

Look at his little smile!

Today, Amazon announced the imminent launch of its newest endeavor, Kindle Worlds, a publishing platform for fanfiction. When I read the announcement, I was horrified, then angry, then sad. I want to take a moment to explain why this is such a tragedy.

This is REALLY IMPORTANT guys. AO3 is so special as a platform. Don’t get suckered in by shiny features or whatever!

If you don’t feel like reading after the read more, here is the most important stand out of Kindle World’s TOS.

“By using the platform, authors give all rights to the work to Amazon, who can then license your elements to other authors with no compensation to the original poster.”

If you want to retain rights to your work, don’t use this site. Stick to AO3.

I found this really cute picrew 👀👉👈 and-

Thank you so much for the tag! 💕 This is super adorable 🥺

Thanks for the tag!!!

Normally, the only reason your favorite demons visited the human world was for buisness. But this time, they brought you along to help you relax in a more familiar place. Little do they know it’s snowing! After grabbing a big coat, you go back outside..