i’m headed to mobile until i knock out, so definitely come pester me.

#out. ❛ wearing a flower crown & sipping coffee.#let me know who you are when i add you please ! also you can always im me im just slower to respond on im
0 notes
sunlilted · 3 hours ago
Text

#prompt. ❛ playing love me or love me not in the garden.#now im going to clean up my ooc a bit and pop off to mobile
7K notes
sunlilted · 3 hours ago
Text

Jamie was named after the man who helped deliver him; Marigold Wilson-Kaldrin never did get his first name, only knowing him as Jameson.

the nickname ‘Jamie’ was one given to him by his sister Penelope, that stuck in the family, and in the town. ‘Jamie’ is a name usually given to folks he wants to be less formal with; friends he goes out for drinks with, people he regularly deals with to get parts for the shop, etc– they’re usually invited to call him Jamie.

He wants people to respect him for his work, for his own personality, not for his rank, or because they think there might be repercussions.

That being said, i will eventually break down the people that work under him in the shop, but for now i want to stress that Jamie’s shop is one of the better ones under military command; he respects his crew, they respect him, and while yes he is technically overseen by a higher officer– he is mostly left to run the shop as he sees fit, because he has proven his worth at the job more than once.

Jamie runs a tight shop, he gets things out on schedule or ahead of it, and at the end of the day he lets his people go home to their families, because he understands that moral is an important factor in the running of his shop.

#james / lore. ❛ and so the tin man built himself a new heart.
1 notes
sunlilted · 3 hours ago
Text

Send 🎤 & a question (about mun or muse, pls specify) to hear my answer in a recording

#prompt. ❛ playing love me or love me not in the garden.
756 notes
sunlilted · 3 hours ago
Text

whomst is going to go ride horses with jamie? not that he has much of a chance to anymore, but when he was back home, he was a very good touch with horses.

Jameson Kaldrin grew up around smokers; his mother smokes still, his older brother ( Samuel ) picked up the habit while in the military, and never really managed to kick it, a lot of the ‘kids’ in Jamies home town snuck cigarettes, cigars, pipes from their parents, grandparents, etc– it’s just what they did.

James started smoking when he was 16, buying smokes from his brother or his friend’s older siblings. When he started working at his father’s garage, he began to smoke to cope with the stress; his father was getting sick, the garage was doing poor, it looked like they might have to sell if things didn’t start going better.

Smoking was normal to Jamie long before he ever joined the military– which made things so much worse. he began to rely on cigarettes to keep himself even, keep his stress at levels he could handle.

He’s also got a bit of a temper hidden under that charming country boy demeanor, and he learned real quick in his teens, that lighting up kept his hands busy enough that he didn’t give into the urge to punch people… as often.

He was around 23, a certified alchemist far from home, when the word came to him that a childhood friend had developed health problems, assumed to be caused by his own 3 pack a day habit. that was enough of a shock to get james to seriously cut back– but he still hasn’t managed to quit it entirely.

Jamie smokes primarily when working ( in the shop / garage ), or researching ( his personal alchemy studies into alchemic-mechanical-engineering ), or when he feels his control slipping– he doesn’t think smoking makes him cool, he doesn’t like the money the habit causes him, and he really, really doesn’t like smoking as an outsider; he hates the idea of someone kissing him after he’s been smoking– or even really being close to him, because he is not numb to the smell anymore.

He depends on cigarettes, and it’s not pretty. he’s tried many times to quit entirely, but then something happens, and he gives in, says ‘maybe next time’.

He has gotten himself down to where on an average week he only goes through one pack, and only smokes a half at a time– but the feeling of ‘need’ is still there.

#addiction //#smoking //#dependence //#james / lore. ❛ and so the tin man built himself a new heart.#a character that struggles with smoking written by a person who struggles with it themselves yeet
0 notes
sunlilted · 5 hours ago
Text

botw verse where sheik is an accidental transplant from another time / timeline, tasked with guarding the ocarina of time / goddess harp depending,

disguises himself as a ‘historian’, but there’s always something just.. slightly off about his story. maybe it’s the uncanny resemblance to Impa, maybe it’s the way he looks young & yet has to be ancient.

Has called himself Sheik, Zamir, Kyve– always assuming a different alias depending on who he is talking to. if someone were to go far back into the records & archives, they might find mention of a wanderer named Sheik, but no one truly knows, other than the current leader of the Sheikah, keepers of secrets beyond most understanding.

in essence, it’s vague & i’m winging everything but yeah.

“ what the fuck is that– ” Curiosity is currently standing atop a chair, pointing to the cause of her current distress… A moth on the floor. “IT WANTS TO EAT ME–” all it did was flutter it’s wings a bit, and the homonculus is scrambling to find a new ‘perch’.

tagged by: keira was included in like three of these so i did it !

tagging: Steal it from me!!!

#keira / lore. ❛ the fairy in the flask that breathed life into machine.#dash. ❛ the garden blooms for all to see.
8 notes
sunlilted · 6 hours ago
Text

personally asking… whomst is going to take keira or jamie out dancing?

My other ride is in Hammerhead 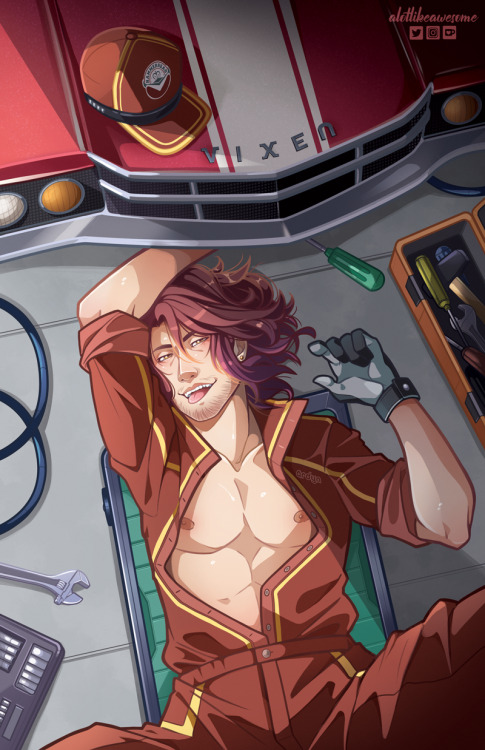 One last piece for 2020. Resuscitating my favorite (dumb) AU.

Hammerhead is not responsible for any bodily harm should you decide to take on his side quests.

#james / image. ❛ there’s something about a country boy’s charms.#james / misc. ❛ more at home in a junkyard than high society.#c ough i had to#ffxv //
262 notes
sunlilted · 8 hours ago
Text

Send 🎤 & a question (about mun or muse, pls specify) to hear my answer in a recording

#prompt. ❛ playing love me or love me not in the garden.
756 notes
sunlilted · 8 hours ago
Text

i am now thinking about aus in which sheik trades places with zelda, yknow like the old bait & switch.

and the kidnapper / hostage taker being in for a big surprise when they get away with a suspiciously quiet princess— WHO WHIPS A DAGGER OUT OF ‘HER’ BODICE.

as i said to lynna: sheik vc  you picked the wrong twin, bitch :)

#out. ❛ wearing a flower crown & sipping coffee.#im gonna go bump a meme and then maybe play a game for a bit
8 notes
sunlilted · 9 hours ago
Text

Em’s Webcomic rec(s) of the week

#out. ❛ wearing a flower crown & sipping coffee.#these are some of my alltime favs
3 notes
sunlilted · 9 hours ago
Text

i am once again thinking about the fact that weapons / swords being sharpened makes keira go into brain fog / panic.

STEP INTO THE SUN, THE GARDEN AWAITS !

Hello sunbeams, do you like original takes on canon characters such as Prince Noctis from FFXV, Tifa Lockhart from FF AC, Hawke from DA2, and even Sheik from LOZ OOT? not your favored flower..

Well, we also have original characters with the own original worlds such as Dante Inkward ( a treasure hunter & sorceress ), Andesha Hakim ( a nonverbal doctor who travels to help people ), or even Keira ‘Curiosity’ Hansen ( a homunculi / artificial being created form alchemy who is made from pure curiosity ).

You’d prefer an original character based in a specific fandom? well good for you our garden also offers Vivian Colven, a Tales of Vesperia based character, Jameson ‘Jamie’ Kaldrin, an alchemist based in the fma / fmab universe, as well as multiple verses for nearly every character on the roster!

* Still under eternal wip. Please give this a like or bump it on your dash if you’d be interested in interacting!

** not all muses on the roster are listed here, and i am almost always still adding / removing muses.

#promo. ❛ those that went over the garden wall.
10 notes
sunlilted · 15 hours ago
Text

i am now thinking about aus in which sheik trades places with zelda, yknow like the old bait & switch.

and the kidnapper / hostage taker being in for a big surprise when they get away with a suspiciously quiet princess— WHO WHIPS A DAGGER OUT OF ‘HER’ BODICE.

as i said to lynna: sheik vc  you picked the wrong twin, bitch :)