Hello, I am just a wide eyed wanderer on the mysterious path called life.

We looked inside some of the posts by tacturiency and here's what we found interesting.

A new video released Monday titled “The Talk” compellingly tackles the impact of racial bias through the lens of black parents in America.

This video accurately displays what it is like to be black in America. It shows the conversations all black parents have with their kids to keep them safe and to encourage them to fight the racist society. And it’s heartbreaking that parents need to remind their kids that their “Black is beautiful”.Society needs to change and time has come to talk about this.

HE SHOULD NOT GET AWAY WITH THIS

btw here is another source other than trumpdaily confirming this. 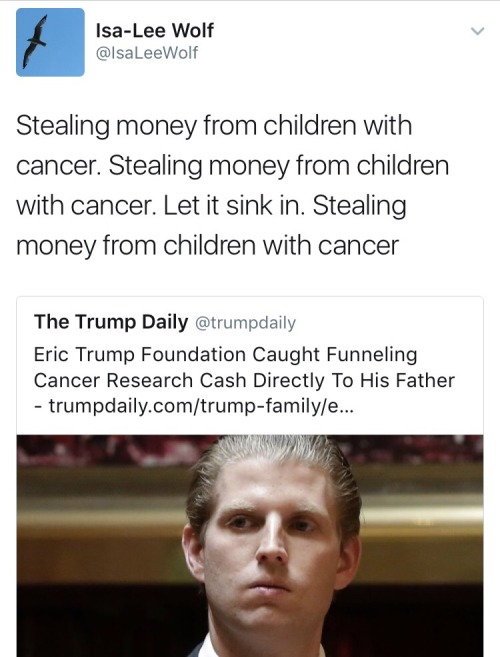 The homophobia that is prevalent in many countries often stems from Christian missionaries who spew anti-queer rhetoric as a part of spreading the message of Christianity. Queerness, third genders, and other complex, non-binary identities have existed for centuries. For example, in Tonga, where my birth father is from, they have a naturally existing community that plays a large role in their traditional society called “fakaleiti” which means “like a lady”. If a family has no daughters, the youngest son is often raised in the role of  traditional femeninity, and respect and spiritual honor is shown to these individuals. This is similar to Mahu in Hawaii, fa'afafine in Samoa, and femminielli in Polynesian cultures. When Europeans and Americans colonized many of these countries, they brought with them anti queer ideologies that were then forced upon the people in an effort to “civilize” them. As a result, many of these countries that once organically embraced varying types of non binary existence  are now completely the opposite. Mix in the weapons technology brought to many countries by Westerners and/or Europeans, and you have a recipe for violence against the ancestral traditions and peaceful ways of life that once existed in most cultures. The root of the rampant homophobia of countries such as Brazil and Jamaica is not in their ancestral traditions, but in their colonization by Europeans.

“Tiarah was pursuing a dual degree B.S./M.S. program in the Peter J. Tobin College of Business where she recently completed her undergraduate degree in accounting in May 2016, and had just begun graduate work toward her Masters degree in taxation.  She had a bright future ahead of her and was taken much too soon. The entire University community sends our thoughts and prayers to the Poyau family during this difficult time.” ~ St. John’s University President Conrado Gempesaw

Process this. Lay it out. Woman went to festival. Woman was dancing. Man said nothing, just started dancing on her. Woman said no. Woman literally got her head blown off. The man was so bothered by the idea that he was not wanted or needed in her space, so he killed her. If you move around these facts at all to try and justify her death….You’re a part of the problem. But you don’t have to be.

If you want and can support, hers GoFound compaign. 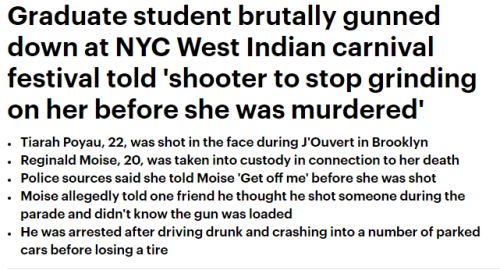 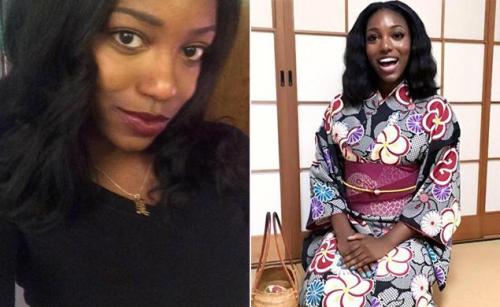 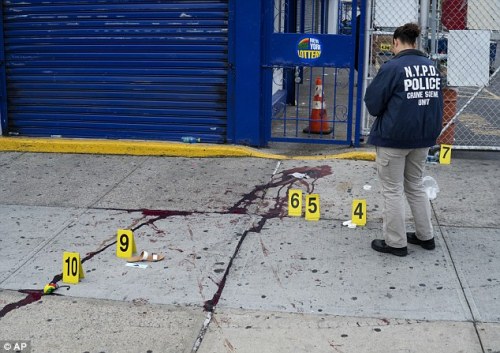 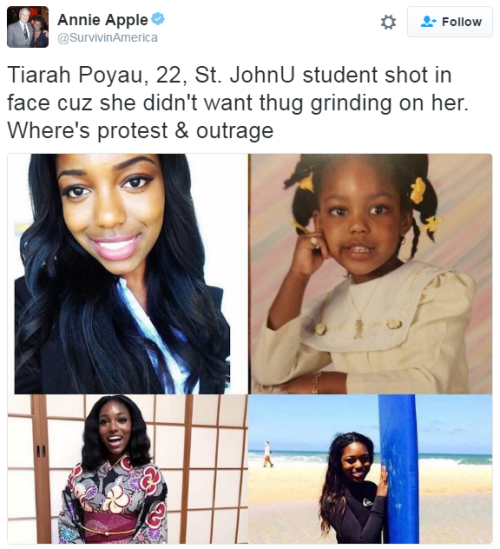 there’s a lot of unspoken pressure to keep liking the things you used to like and to keep dressing the way you’ve always dressed and to never question what you believe in and basically “be yourself” has slowly morphed into “be what everyone knows you as” but trust me when i say if you just give it up and simply make decisions and take actions based purely on what would make you happy, you’ll gain a very comforting sense of self peace

Music is playing through the speakers and we are moving along to it slowly, singing now and then, and I look at you as the sound melts into the background. Just us, everything blurs out of focus and leaves us to each other.

Remember Brock Turner? Here is another one!

One of the bullies, 19-year-old John R.K. Howard, pled guilty last week to a felony count of injury to a child. That’s a lesser charge than he originally faced, forcible sexual penetration by a foreign object, which could’ve landed Howard in prison for life.

Now though, Howard will avoid any prison or jail time at all, and could even have his conviction dismissed if he completes his two- to three-year probation without committing any new crimes or violations.

At least, they didn’t call him “a kid”, just “a student”, but it would be better if they called him a beast or an animal because no human being is able to harm a disabled child!

“Deputy Attorney General Casey Hemmer said it was neither a sex crime nor a hate crime” - then what was it? White boys having a little fun?

Because this rapist is on the loose now… 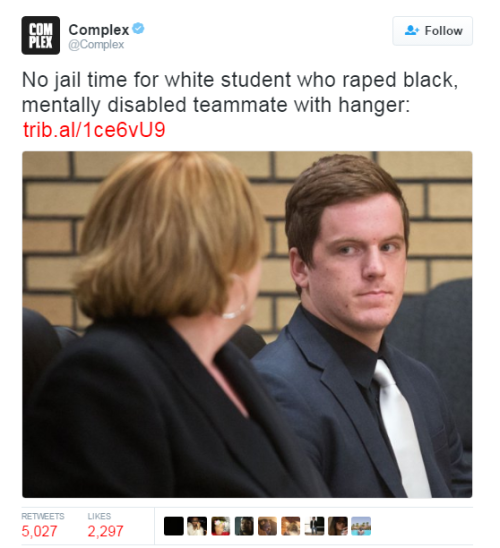 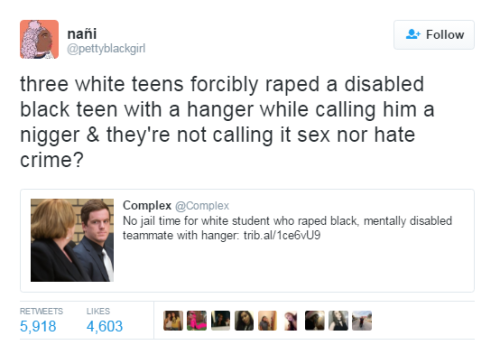 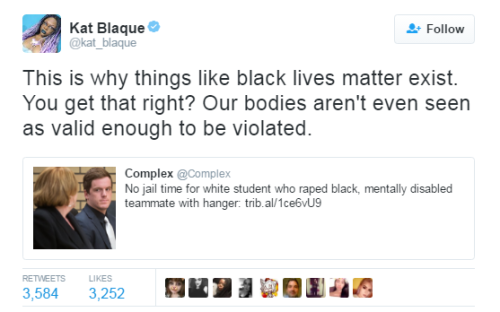 #this makes me want to puke, #and cry
57K notes · See All
tacturiency·3 years agoPhoto

Watch: The last type of mis-pronouncer is the worst, most insulting of all

Talk about Aleppo. Cry for them like you cried for Paris. Cry for them like you cried for New York. Talk about them. Our silence is killing them. They are people, PEOPLE. Are they not important because they’re arabs? because they’re Syrian? Do their lives matter less than the life of a French or an American? People from Aleppo are posting their goodbye messages on the internet as a final massacre is expected to happen any time soon and we are SILENT. We have been silent for over five years. Some children in Aleppo don’t know life without war. Imagine living in a city of ruins and having to fear for your life every instant. Hospitals, churches, houses, restaurants are bombed on the daily and hundreds are killed every single day. Yet we are silent. Remember them. Honor them. We’ve allowed a mass genocide to happen before our eyes for years. It’s burning is a testament of our moral failure. Talk about Aleppo, please.

Guys, Direct Relief (directrelief.org) is one of the highest-rated charities with 99% of donated money going directly to their programs. As I’m sure you’ve heard, Aleppo is about to be completely destroyed. DO is assisting with the Syrian Refugee Crisis and can use all the help they can get. If you are in a position to donate, please do so.

Whether or not you can donate, please reblog.

Today there were advancements by the assad and russian forces into the city and aleppo is about to fall. 100,000 people are trapped in. Public executions are reported. Photos and videos from the city are scarce which is only more terrifying. Activists and journalists have all sent their last or farewell messages and there is no way out.

I hate it when I see an unflattering pic of me and my friends are all like what no you look fine!!! you look normal! it’s like……damn……so I’m that ugly all the time

I love being called baby, and falling asleep on the phone, getting random paragraphs, and getting blown up cause I didn’t text back fast enough

If Germans voted in the US presidential election.

I am sorry but until you live in America I don’t think you should have any opinion.

They don’t get a vote, but they sure as fuck can voice their opinions all they want. 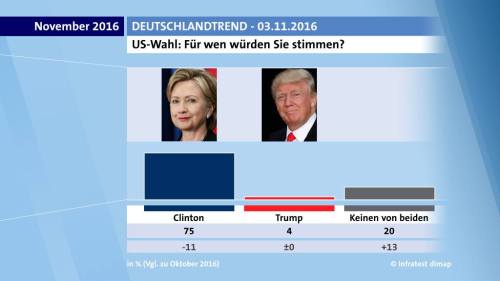 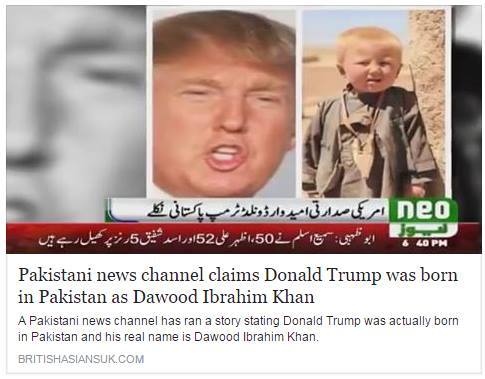