Harry smirked lightly at the prissy princess and pulled her into a kiss, hoping that the action would startle her enough to put her shields down so that he could win the fight ahead of them without harming her.

@heartsunholy​ liked for a starter

“The sea calls ta many, but only a few can truly answer the call, yet no one actually pays attention ta tha’. Yet they call pirates stupid”

“Now what can I do for ya lass?” Harry mused as he spotted the woman that seemed a little out of place.

Today’s studying is powered by All Time Low and Iced Coffee with motivation provide by Voldemort.

Behind Bars Being Studied
Writers are welcome.
Two talking
are filling in cracks.

I wasn’t ready to talk
when I was sitting in the car.
I was thinking about the hole,
and how strange it was.

I thought about it. It was clear.
There was a pit. It was common.
The way boys trip
that would have been a good place for Spot.

They were anxious about methods,
and a pit, and why—
when town

Fanficrecs because I have nothing better to do with my life

Crust and sugar over

Yuuri and yuri friendship most beautiful I love.

The skater the dancer and the hellcat

Lies in the guise of truth

Dadmight powers so on point that he dads not only izuku but no less then 4 grown men.

I am currently trying to figure out how I want to decorate my graduation cap, so I figured I would come to tumblr for help. These are the 3 options. Obviously the finished product would look better and have more decoration, but this is the general idea. Anyway, message me or something with your favorite of the three!

First born of the pure-blood family Zabini, he was sorted into Ravenclaw, his intelligence always made him stand out from others, but his code of conduct is different from most, and his love for traveling and fantastic beasts makes him a more creative person.

Him, Oberyn and Brandon were best friends sense their first days in Hogwarts, and he acted as one of the biggest supporters of the relationship Oberyn and Brando would come to share, being one of the only people to know about them . As the wizarding war started Brandon asked him to help Oberyn and Elia to hide together Ashara his sister, with Daenerys and Brandon’s younger sibling Benjen. After the war ended the friendship between Oberyn and him became even stronger after Brandon’s death. He is compassionate , kind , intelligent and a friend who stand by his group .

that’s why i blocked ria 😝😝 try it sometime

#harry tag, #ria tag, #ria if you see this youre on thin ice 😐😐 im, #im not online rn but if i come online and i see birkenstock creatinine im blocking you again, #mutuals, #asks
3 notes · See All
barbara3youngText 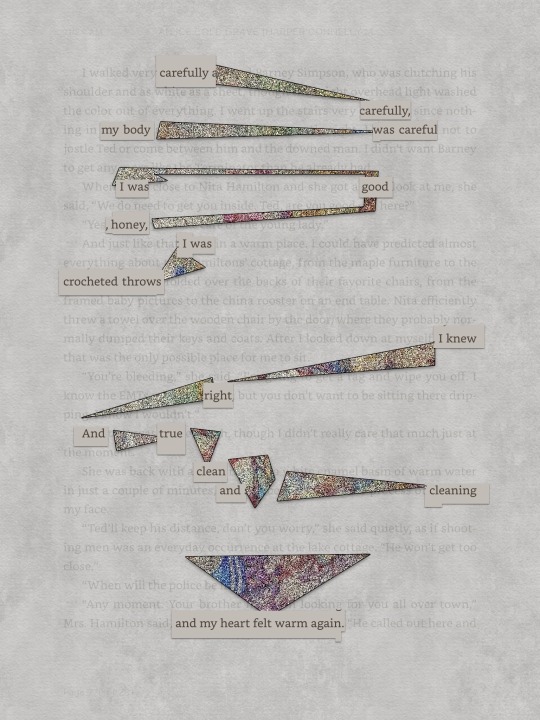 Carefully,
carefully.
My body
was careful.
I was good honey.
I was crocheted throws.
I knew right
and true,
clean and cleaning.
And my heart felt warm again.

“S-So…” There’s no way to hide Harry’s blush, even with the darkness of the closet one could see the faint glow of his cheeks. Eyes averted, Harry chews on his bottom lip nervously. He was going to kill Miles and Gwen for this! They knew he had a crush on Kaze just like they knew he had one for Peter and they still pull this shit?!

He takes a deep breath, stealing his nerves. This might be his only chance to act on his feelings… “Guess we should, uh, get started…” He mumbled, scooting closer. One more mental speech, and he leans in, closing his eyes and pecking Kaze’s lips.

“You doin’ good, Breeze~?” Qrow asked with a smirk, teeth lightly pitching the others ear. The girls thought this would be fun, and he had to say, Qrow was in agreement~.

“Come on now, isn’t that bad~.” He could hear Kaze quietly cursing his team. Knowing Kaze had a crush on him, Qrow was milking this for all it’s worth. “I’m saving you the embarrassment from actually kissing me~.” Because biting his ear was so much better.

The handcuffs turned out to be real, but
marketed to fit animals or small children.
In the past I would have said a family
of killers, itself so tortured and wronged,
might be alien shape shifters. Surely they
could have no normal relationships.
My thinking has changed, though.
About my fellow man I have questions
without answers. Too comfortable
and secure to look hard at the truth,
I have been wrong, and in deep ways.

@hermionesmagic asked: “ Am i dramatic? Yes. Is it justified? Also yes!” Hermione replied as she paced the floor of Grimmald. “Harry, this is my whole career! Which department’s offer should I take?” she asked, looking defeated and nervous as she stopped and looked at him pleadingly.

Harry looked over at Hermione and chuckled softly. “Relax, Hermione. Whatever decision you make, you’ll do well.” He sat down on the couch, watching her pace around. “Alright, sir down. How about you make a list of pros and cons? If you do that, I can help you choose. But it’s your decision.”

How to Put Socks on a Fish

Replay the good
turn back the rest.
Relax in a bath.
Explain the open door,
the feet coming up.

Look under the bed.
Push past the sand,
the rock, the big fish
overlooked while whaling.

Pull off, put on.
Stop thinking so hard.
Endure.

Okay. That is where I meant to quit. But I wondered if I could take this sucker a little farther.

Now I cannot swear that I have not used any characters more than the source text does. Don’t think so, but not swearing.

So you might consider the following as an alternate instead of an afterbirth.

I wanted to tell you about what happened, but turns out
it was the hadn’t-paid-attention-exam dream. But
there was a knock at the door. And I was being all
glad to be awake and clean to answer it and see who
was trying so hard to get into the cabin just as I was
figuring out about dressing. When it was the koi
that came up it was credible. Otherwise realizing
she looked like the Chief of Police would have been
horrifying. Even so I had to stare. Let’s say I was surprised.
“What’s up, Chief?” I said. She said “Okay, I’m not happy
with you doing this.” She gave a look. Seems I had made
my one and only bed and it was time to fry. Then
she went down through the trap door and came back up
worrying about our sleeping arrangements. But there was
a knock at the door.

She can hardly get out of bed
in the morning. That kills her.

Love cut and burned
and much worse,
and there was nothing
to be done about it.

But time was time.

The third born of the Lestrange family , unlike her two brothers she was born in Great Britain , being the first of her family to be sorted into Hufflepuff. She is threaded very well by her family but her two brothers in specific her brother Oberyn adores her . She also had a relationship with a friend of Oberyn , Rhaegar but they decide to sort way amicably when Rhaegar found out Elia had feelings for another person, that being Arthur Zabini, Oberyn’s long time friend .

Kind-hearted,gracious, just, loyal and abound all else patient. Described by Howland Potter once as a ray of sunshine. Elia always brings happiness to we’re ever she is, she often consoles people and is a known to be the confidant of her friends , specially after the second wizarding war . She is a friend to most of people, and has already been romantically liked to Rhaegar Malfoy , Lyanna Black , but her one true love is Arthur Zabini with whom she feel in love at her second year in Hogwarts.

(None of these gifs are mine, credit goes to their rightful owners!)

(None of these gifs are mine, credit goes to their rightful owners!)

Thank you to everyone on Twitter who’s expressed interest in ordering! I’m making classic literature themed candles e.g. The Hobbit: pine & charred barrel wood scented in a cut glass tumbler, plus some of my other fav texts.

I wanted to know if any of my Yuri On Ice fans would be interested in something similar? With illustrated label of preferred character/pairing or a charm in the wax? Scent and colour to match chosen characters. Each candle will be bespoke.

#I’d also do so many Harry Potter ones omg, #yuri on ice, #victuuri, #yoi, #viktuuri, #otayuri, #chumetti, #milasara, #any of them tbh, #drarry, #creatober, #candles
22 notes · See All
Next Page