Tumgir
AboutPrivacy Policy
AboutPrivacy Policy
Visit Blog
Explore Tumblr blogs with no restrictions, modern design and the best experience.
Fun Fact
Pressing J while looking at a Tumblr blog or home feed will scroll up on the page, pressing K will scroll down. This is helpful considering a lot of the Tumblrs feature infinite scrolling.
Trending Blogs
#😂😂😂
adoriable
Answer

honestly, i expected his final power to be.. cooler. it’s just.. tentacles? douma had a much cooler power than him, in my opinion. and then his final form was.. i can’t even 😬

he may be sexy—but he for sure was childish and self-centered. it makes sense though, thinking about his backstory.

and please, this panel still cracks me up to this day—like why did you think tanjirou would want to stay with you after you caused him so much pain and suffering?

AND HIS RESPONSE IS—

It’s embarrassing how dead my inbox is😖😂

beside the fact im takin a break off writing, i get a LOT of kurta reader requests and i wanna explain why i dont like doing them. With reader inserts the idea is that everyone can see themselves in the reader-figure and experience the story as the self-indulgence its meant to be.

the kurta clan is a completely white with blonde hair clan, and therefore i cant really make it really neutral for all readers, which is why I dont like writing it.

We shall not talk about our gpa 😔✋🏻

i hate that my brain thinks jeremy shada’s wife is his sister.

: *HAVE BAEKHO BATHE YOU ROUGHLY* or

I want to tell my mother!

But…What will happen to DD, was he entering puberty or something? 😂😂😂

Although they are dirty, they look adorable…why?

The magic of the beauty

#both are dirty ...#😂😂😂#yes sure is a soulmate thing#bjyx#yizhan#wangxiao
13 notes
d0wnwiththethickness
Text

Kempe, there’s a pandemic, put your tongue away

hc accepted, this absolutely would happen 😂 she’s like SURPRISE and it’s a full on blaze lmaooo

written as a promo fic for @yoidogsandcatszine

preorders are still open! get the zine before 01/31 if you’re curious about the other story I have written for it 😉

He does not regret any of it, for his love for the stars fills his heart and makes his choices worth it.

But, if there is one thing Victor does indeed regret, it is the loneliness that comes with this kind of life. The stars, however beautiful, magical and interesting, are distant and cold – they can never replace the warmth of a smile or a touch of a helping hand. And, while Victor tries to convince himself that these do not matter as long as he finds inspiration to continue his work, a part of him recognizes the deep longing that swells inside him with time: a want for companionship, a need to share his laughter and sadness with another.

On that star-fated night, it is these reasons exactly that guide him to accept the opportunity he’s been given. For in the forest that spreads north from his humble abode, Victor finds an overturned carriage and, in it, traces of robbery and naught else. Or so he believes until he hears the mewling from under one of the seats. There is a wicker basket there, once he checks, and it is from within that the sound plays on the heartstrings of his loneliness.

Unable to reason with himself, Victor opens it. The moment his eyes meet the brown, button-like eyes of the puppy, he knows it is fate.

He brings the little one back home, but thus begins his biggest challenge – he knows nothing of dogs. The only canines he is familiar with are the bright points of the Canis Major. Sirius, the alpha in the lead, and following him on the hunt – Mirzam, Aludra, Muliphein, Wezen and Theta. Yet, even those brightest in the night sky cannot tell him how to care for a dog.

The little thing, as soon as they stepped into Victor’s house, began to sniff everything in sight. It soon found a corner to its liking and curled up in it to sleep. But sleep, it won’t forever, Victor knows. It will awaken hungry and needy, and Victor has no knowledge of what dogs eat. What they need, what they can’t have, what he should and shouldn’t do. He has never before dealt with one, and now that he must… he feels as lost as he is excited for the company.

So, while the puppy slumbers, Victor steps out of the house and kneels in the grass that already smells of dew. His eyes rise to the sky, where he searches for the one who can help him. He finds them with ease: the hounds chasing a hare through the heavenly plains.

There is a belief among the star witches and those who take their power from the stars, a belief that within the darkness between the bright ones slumbers a being, a god who watches over his lot. Each constellation has one, or so it is claimed, and on that night Victor chooses to believe in the unproven. He looks into the darkness that surrounds Sirius, the brightest of the hounds, and prays:

He raises his hands then and all magic that has gathered around him pulses with the rhythm of his heartbeat as it rises and rises and rises. Victor remains with his arms held up until the grey light of dawn stings at his eyes. Only then does he lower his arms and cuts the connection to his magic that has risen beyond what any man could reach.

The dog continues to slumber where he left it, so Victor warms some soup for himself and fills a small bowl for the dog as well. He sets it down on the floor, hoping it’s enough, before he slips into his bed. The last thought he has as he gives into slumber is not quite a thought, but a feeling.

A completely new feeling of warmth and safety. A feeling of happiness. 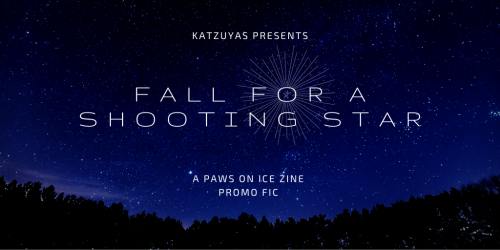 #😂😂😂#ima delete this later#I don’t want this young man on my blog#I hope every is doing well#I got work for one class done and now I’m taking a small break!!
0 notes
baby-foxx
Text

me disappearing into unrealistic fantasies to cope?? absolutely.