Just because she’s a mermaid doesn’t mean you can stare. mermay 10! 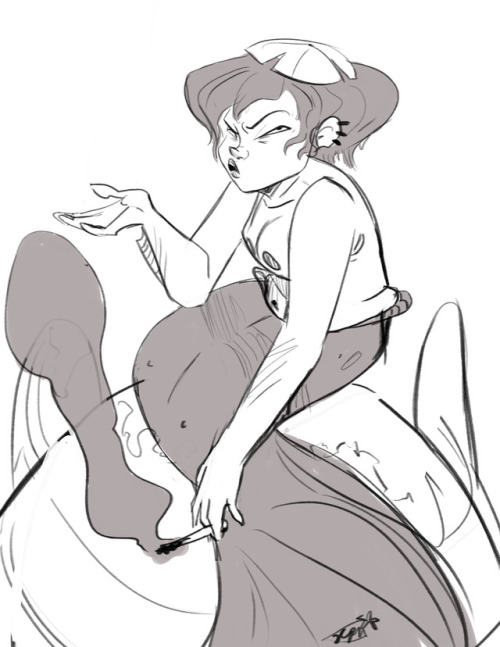 They re-shackled and re-hooded me and left me there. A long time later, the truck started to move, rolling downhill, and then I was hauled back to my feet. I immediately fell over. My legs were so asleep they felt like blocks of ice, all except my knees, which were swollen and tender from all the hours of kneeling.

No smug shit so far, just the facts and the visceral horror of imprisonment.

It’s not very horrific, though, the way Cory/Marcus tells it. Legs being “asleep”, in particular, is a really lighthearted phrase that I find completely at odds with what’s going on here. Numbness, immobility, paralysis, powerlessness, yeah, I’d go with some associations like this. Being asleep? That’s safe and peaceful.

I don’t think Cory has a very good imagination for “powerlessness” or “not being safe”, is what I’m trying to say. And here’s some corroboration:

Then we were moving again, and this time, it wasn’t like driving in a truck. The floor beneath me rocked gently and vibrated with heavy diesel engines and I realized I was on a ship! My stomach turned to ice. I was being taken off America’s shores to somewhere else, and who the hell knew where that was? I’d been scared before, but this thought terrified me, left me paralyzed and wordless with fear. I realized that I might never see my parents again and I actually tasted a little vomit burn up my throat. The bag over my head closed in on me and I could barely breathe, something that was compounded by the weird position I was twisted into.

Seriously, Pronounced Winston, this is what scares you? Leaving “America’s shores”? Not torture and imprisonment and death?

I suppose it’s excusable for the character, because we understand that the protagonist has never had to fear for his life – plus, the shock of it all must be a thing, too. It’s not implausible that this little bit of ideology, “taken off America’s shores”, being brutally torn out from the protection of the nation-state, would push him over the edge.

So! Let’s call it accidental competence and move on.

(Note also the vomit, directly related to the piss/excretion/abjection theme. Not subtle, but plausible and thematically sound.)

Anyway, they arrive somewhere and put him in a cell.

The next time they came to question me, I was filthy and tired, thirsty and hungry. Severe haircut lady was in the new questioning party, as were three big guys who moved me around like a cut of meat. One was black, the other two were white, though one might have been hispanic. They all carried guns. It was like a Benneton’s ad crossed with a game of Counter-Strike.

And the smug shit returns with a vengeance, complete with a videogame reference. What even is this? Is it worth it to analyze how this fragment addresses race and ethnicity? Fuck no it’s not. It’s Pronounced Winston trying very hard to be an unfunny dickhead when his life is in peril. Next, please.

The interrogation room was modern, with fluorescent lights, ergonomic chairs – not for me, though, I got a folding plastic garden-chair – and a big wooden board-room table. A mirror lined one wall, just like in the cop shows, and I figured someone or other must be watching from behind it. Severe haircut lady and her friends helped themselves to coffees from an urn on a side-table (I could have torn her throat out with my teeth and taken her coffee just then), and then set a styrofoam cup of water down next to me – without unlocking my wrists from behind my back, so I couldn’t reach it. Hardy har har.

Writers often speak of characters having “a voice” – a unique, recognizable way of speaking. In Little Brother, Doctorow discards such quaint notions without a shred of pity. He knows that the only voice that’s necessary is the booming divine proclamation of the author, put into any number of convenient mouthpieces, or displayed in contrast to ludicrous strawmen. Acknowledging that his characters are basically interchangeable – that an intimidating military interrogator doesn’t have to speak differently from a callow high school youth – elevates Cory’s book to the highest plane of literary achievement, alongside What I Did On My Summer Holidays, by Peter, age 5, the World of Warcraft User Manual and the DSM-IV.

I didn’t say anything.

“This isn’t as bad as it gets you know,” she said. “This is as good as it gets from now on. Even once you tell us what we want to know, even if that convinces us that you were just in the wrong place at the wrong time, you’re a marked man now. We’ll be watching you everywhere you go and everything you do. You’ve acted like you’ve got something to hide, and we don’t like that.”

In an effort to convey how evil this woman and her entire institution is, Cory has her talk like a B-movie gangster. “You’re a marked man now”? Please.

The hammy cartoon villain act goes on for a while, with the “severe haircut woman” (isn’t that some kind of dogwhistle?) demanding that Marcus remove his super leet teen haxor phone locks that the literal US military has no idea how to circumvent. Your tax dollars at work!

The word “no” was on my lips, like a burp trying to come up, but it wouldn’t come. “Why?” is what came out instead.

Again with the icky bodily functions; burping is this close to vomiting. We get it already. Also: “trying to come up but it wouldn’t come”? You’re pretty rich, Doctorow, hire a goddamn editor already.

“We want to be sure that you’re what you seem to be. This is about your security, Marcus. Say you’re innocent. You might be, though why an innocent man would act like he’s got so much to hide is beyond me. But say you are: you could have been on that bridge when it blew. Your parents could have been. Your friends. Don’t you want us to catch the people who attacked your home?”

But as soon as she switched to this BS about “safety” and “security,” my spine came back. “Lady,” I said, “you’re talking about attacking my home, but as far as I can tell, you’re the only one who’s attacked me lately. I thought I lived in a country with a constitution. I thought I lived in a country where I had rights. You’re talking about defending my freedom by tearing up the Bill of Rights.”

Well, someone has been paying attention in all the political discussions on Slashdot.

I’ll come back to the last part (hopefully after a shorter break this time); for now, feel free to enjoy that moment of self-assured libertarian chest-pounding in all its unabridged glory.

someone repeatedly called me a bitch today

i do not know what i could have possibly done to warrant his ‘tude!!

so i punched him in the throat