Here’s some 1920s AU for @petratodd, @kylos-electric-slide, @kylo-wouldnt-like-those-chips and @sempaiko where Rey’s a flapper girl that’s actually a bootlegger, Kylo is the brawn of the operation and Poe is the suspicious cop.

Oh this is FUN. 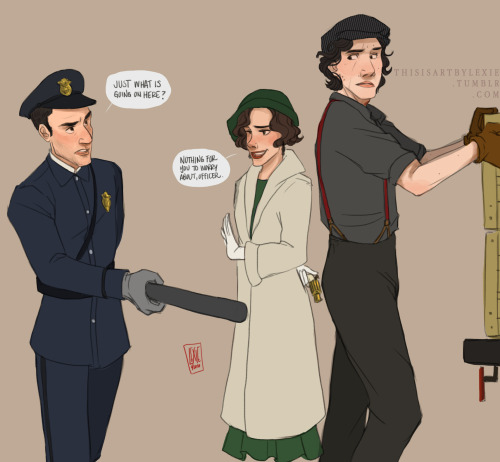 I have character designs down but I’m terrible at posing for one person let alone one person and a bot together. But uh I had fun.

I’m going to craft an actual plot at a later date. 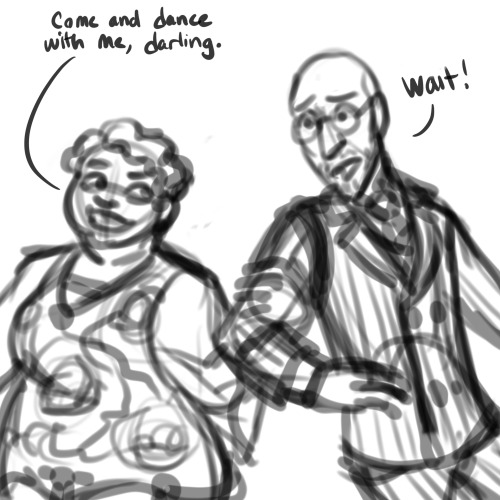 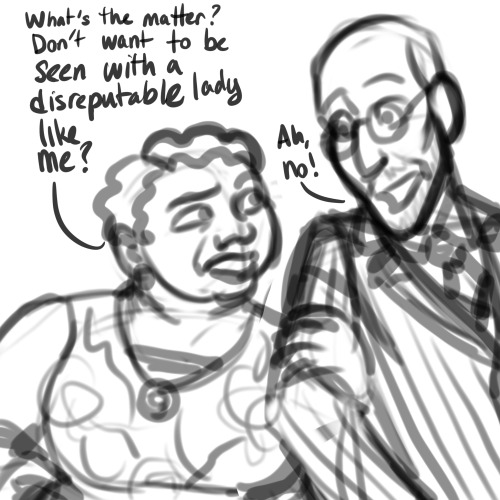 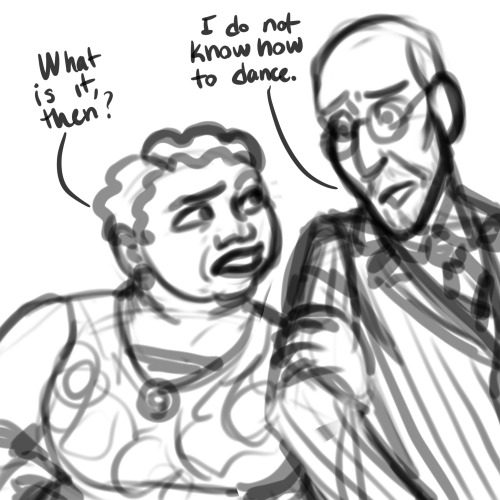 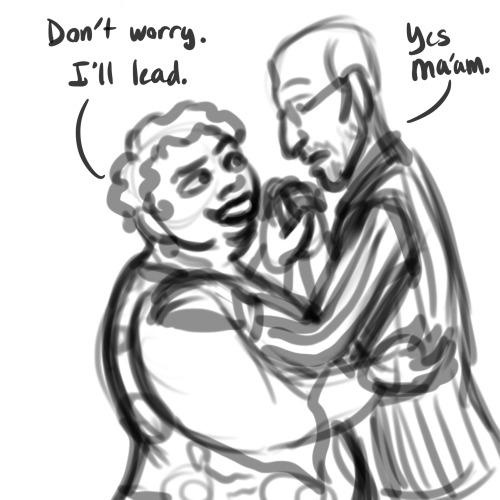 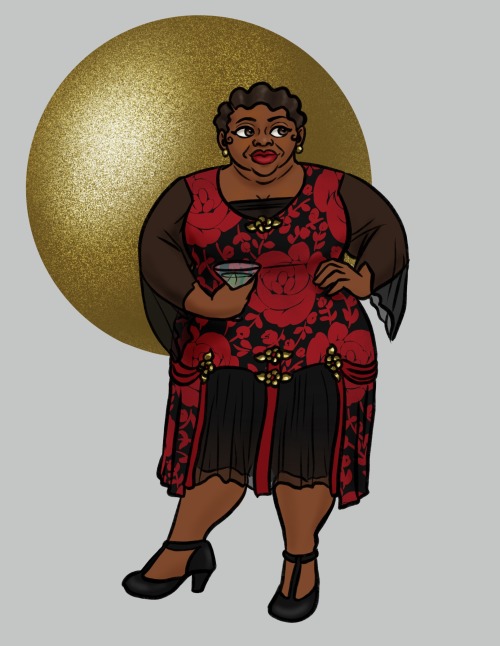 Triple pearl necklace bc she deserves it.

Today is the final chapter! I also posted a smutty epilogue as a treat. I was going to wait to share that but I couldn’t wait 😂

I really hope that @everythinghappens-love enjoyed this story & thanks so much to @bobbimorseisbisexual for organizing this awesome exchange!

Mafia!Peridot: Good! I love Lapis with all my heart!

Chatroom!Peridot: Oh stars, I’ve got it bad for her, she’s so perfect!

Re7!Post!Peri: Should hope so, I pit up with all her drinking.

Re7!Pre!Peri: Of course I do, we have 2 beautiful girls together!

Legacy!Peridot: I really like her already, I hope she’s the one for me too.

Glitch!Peridot: I love Lapis a whole lot, she’s so pretty and nice!

Momswap!Peridot: What?! No, no that’s preposterous. She’s lazy, and rude, and, and… Ugh! No way!

Ghost!Peridot: She’s the only one who understands me, she saved me, I’ll be with her forever.

Re7!Lapis: Must have been born with it.

Chatroom!Lapis: Yeah yeah, make fun of me. So I have a crush, so what?

Legacy!Lapis: Well, I think she’s got it just as bad for me. Like, like Lapis- itis, I guess. Not… You know what I mean.

Hospital!Lapis: She is kinda cute. In like, a nerdy way.

In a perfect world, I would be able to provide some illustrations to my fanfics.

Sometimes though, I just kinda want to add playlists and let you guys have your own images. (Because y'all have beautiful imagination tbh)

This has been requested by the oh-so lovely @depressed-philosophers-daughter​. She is really sweet and I’m really happy that she gave me this opportunity to write this. I’m sorry it took so long but I wanted to get it right… even then I needed to stop myself and let the readers decide if I really touched them- hopefully, I did. Though, I kind of lost the 20′s vibe somewhere in the story, I’m sorry!

Now, this touches really dark themes of suicide. I’ve felt sad in my life, and it was one of the darkest points of my life. No, I wasn’t suicidal but I know a lot of people are and please, if you need someone to talk to, I’m here and a lot of people are too.

That being said, I wanted to touch into that sadness and really elaborate that feeling… though, I wish it was better but I can’t make everything fictional. I hope you guys enjoy it, and this is not for someone who is going through a tough time.

1. “Remember the words you told me; love me until the day I die? Well, I love you too.”

6. “I trusted you with my life. Look what happened.”

27. “I think the noose around my neck says otherwise.”

Warning -  angst, profanity, blood, suicidal emotions and thoughts, acts of violence. Read at your own discretion.

Summary: Being involved with people is one thing. But being in love with one of them is another. (Y/n) in the past and (Y/n) in the future are two completely different people. Although, she kinda learned it the hard way. In a series of present events and memories, they all lead to a conclusion the female never once considered… but is know what she thinks to be her only option.

@makalaure-kanafinwe​ requested some Gondolin and/or Victorian Au memes for a Wonderful 1000 prize and I decided to go off the rails and do the following:

AN: this is another fic that was born from a submission I sent in for one of @bucky-plums-barnes theme days, I’ll link to it in the notes if I find the original post. As always, any feedback is greatly appreciated since it lets me know if there’s interest in the story and worth continuing

Clay sits alone in a small damp and isolated jail cell, this wasn’t the first time he’d seen the inside of a cell nor would it be his last. Judging by light that filters through the small window above him, Clay knows that it’s been at least few hours since they locked him in the cell, he’s always the last one the cops ever talk to.

It’s routine and Clay is well aware of that. Whenever the cops bust a speakeasy or bootlegger, they separate the employees or runners and use whatever means necessary to get the guys to give up the names of those running the show. He knows this precinct especially well and their reputation for their heavy handed methods in getting criminals to talk.

Clay is anything but nervous as he hears the heavy door to his cell unlock. Two officers walk into tiny room.

“You again, Appuzzo? You must see the inside of a jail cell more than your place.” The older officer states, he’s a man that Clay knows all too well.

“What can I say, Frank? I need a place to crash when your ma’s out working the corner.” Clay answers with his trademark smirk.

The older man punches Clay in the face, he shakes his hand as Clay spits out some blood. The young guard, a rookie if Clay had to guess, looked uncomfortable at the act violence against Clay and made a flimsy excuse to leave the cell.

“This was it right? The last joint in the city?” Clay asks once the two men were alone. He watches Frank run his hand through his salt and pepper hair, shaking his head.

“There’s talk of another one. Biggest place in the city if the rumors are true.” Frank answers as he unbuttons and rolls up his sleeves before sitting beside Clay on the small bench. “A place like that must have some powerful people behind it. Who knows maybe we can clean up the city.”

Clay sighs and shakes his head, he doesn’t know how much longer he can do this kind of work. It is a strange feeling to live a life of sin, breaking laws and having the police force pay you for it. The longer he’s undercover the more the lines start to blur and he starts to question which version he truly is. He took the assignment with the promise of moving up the ranks, but more than a year later he’s still undercover with no promotion in sight.

He runs a hand through his slicked back hair, “fine. Give me the details and I’ll see about scoring an invite.”

Somewhere along the lines they all move in together. It’s mostly out of convenience, because Roman sleeps over more nights than he doesn’t and Virgil is moving back home to save money, so it’s a no-brainer that all of Roman’s stuff just ends up dumped into Dee’s car. There’s not that much of it left that hasn’t already migrated over so it’s an easy trip, and they’re soon home.

And it really does feel like home. Remy and Dee are crazy domestic when they’re out of their performance and/or public personas. Even haughty, proud Dee shows he can be quiet and sweet and shockingly cuddly when they’re in the privacy of the penthouse.

They appreciate Roman being around to keep things tidy, cook them meals and deal with the bills and all the things they’re too tired or uninterested to deal with themselves. Dee likes the heated debates and dance partner for when the record player is on and they crank the volume up. Remy likes the foot rubs and slow, swaying kisses in the light from the street, and being carried to bed like royalty when they’re too tired to walk anymore. They both love having him permanently in their bed.

Teething problems abound, naturally, because all three of them are incredibly spirited, opinionated individuals. Dee and Roman get into most often, because Remy mostly lives to make snide remarks and stir up trouble, unable to stick arguments out the way Dee and Roman have both been brought up to. It can get truly spectacular, when Dee snaps and starts to actually shout. Roman has yet to back down, maybe less eloquent with the words he uses but just as expressive and well-thought out in his own counters to the highbrow things Dee likes to throw at him. They never ever use anyone’s background against them however. That is firmly off limits, after the first time Roman made a bitchy remark about Dee’s rich parents and Remy had gone ballistic in his defense of the other man.

They’d made up later, when Remy had gone out to meet a friend, sat opposite one another at the kitchen table and murmuring as they tentatively held hands and realised that they’d survive this to stay in love. Thus the boundary was set and the relationship strengthened. They were cuddling on the couch with a glass of wine each when Remy got back, and the relief on their face at the sight made Roman feel awful but Dee smile, secure in the knowledge of how much this meant to them all.

Nowadays they’re never apart for long. Dee is considering buying the club for Remy, because he knows they’ve been slaving away to afford share after share of the place on their own merit but he figures it would be better to slowly pay him off than the landlord, who is considerably more stingy and often seems to overcharge his partner. The shows go on, and Roman joins the team, his own stunning voice bringing in a slightly different, newer crowd and an extra shine of respectability, because he performs in significantly more clothing than his two Charmers do. The thought of Roman being respectable makes anyone who knows them laugh, but he appreciates the image and takes great care in it, dedicated not just to the Belles of the club but now to the club itself.

And life goes ever on.

hey hey heyi have finally finished the thing in full color blue ray and dvd!! if you couldnt tell, i really like four :D also i was thinking about making a 1920s/mafia/great depression AU because i mean 1) i want to and 2) i think it’s something other people might enjoy if i recall
so stay on the look out!! 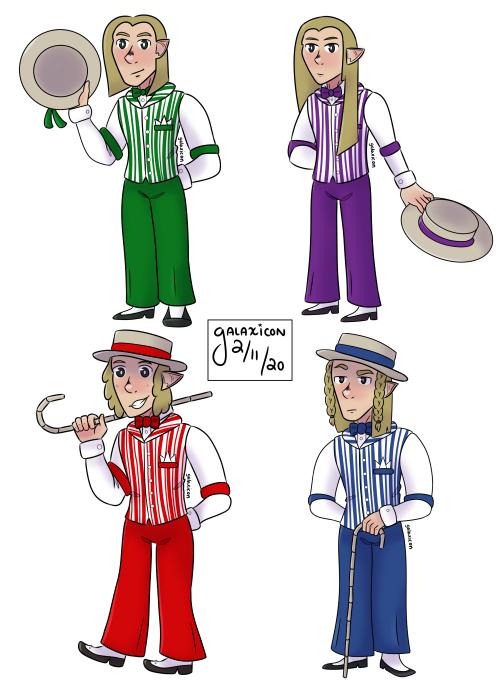 “Much like life,” Kly agreed as she looked at the state of the man. Another veteran. Found drunk on some street. The police knew she would take strays in at her small clinic. “Yours especially if you don’t give your liver a break. Come drink some coffee and eat something to absorb whatever it is you drank.”