My cover art for the first issue of the succubus-meets-superhero saga Breathtaker (DC Comics, 1990). Arguably my strongest collaboration with writer and colorist Mark Wheatley, Breathtaker was originally published as a four issue “prestige format” series, and was later reprinted as a Vertigo trade paperback. We had fun utilizing some fancy-schmancy printing effects on the covers (e.g., the large heart design on this cover was printed in a fifth ink color).

Breathtaker is returning in a forthcoming hardcover edition from Titan Comics … remastered, and with an introduction by Neil Gaiman. 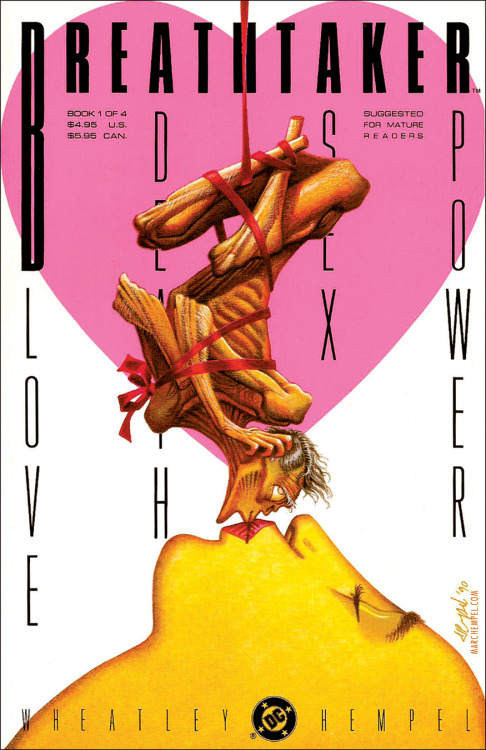 1992 Queen themed comic from Rock n Roll Comics, Revolutionary Comics. Here we see what the band has been up to in the late 80s, leading up to The Miracle. 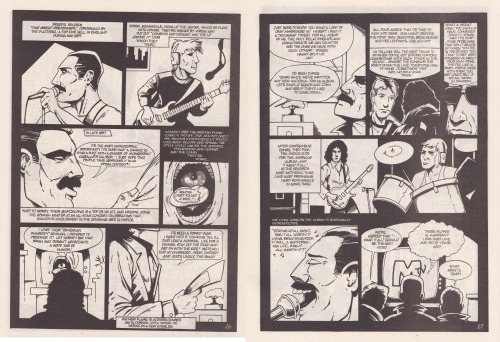 First page of 1992 Queen comic about the making of Night at the Opera, by Hard Rock Comics (Revolutionary Comics). 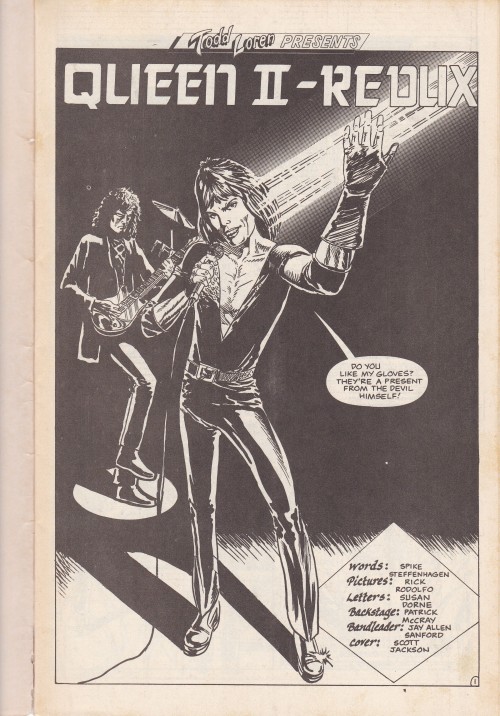 The origin of the worst version of Doctor Fate 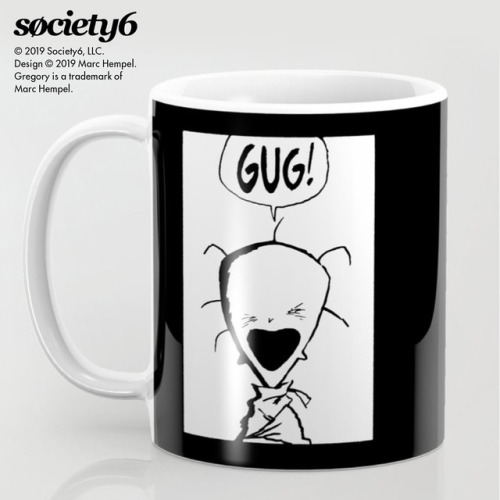 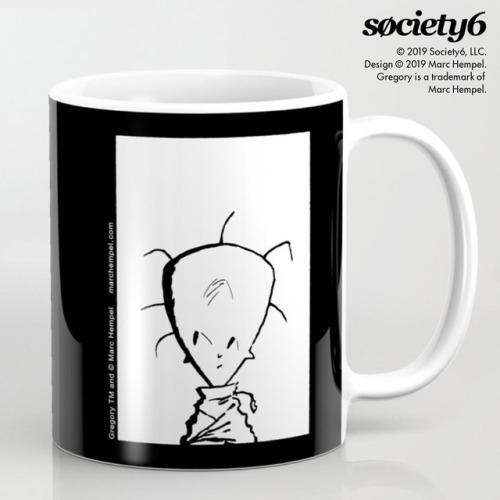 Man, were 90s comics a wasteland of forgotten and unneeded redesigns or what?

This next one didn’t even survive till the end of it’s own 4-issue mini-series before other creators started to ignore it.

We’ve been used to Nick Fury looking -roughly- the same since his creation in 1963. Usually some kind of blue jumpsuit with gun-straps and pouches, as depicted below (chest hair optional):

But in April 1995, in the “FURY of SHIELD”, four issue mini-series written by Howard Chaykin they decide to re-vamp the old war-horse into this “inspired” design:

You might be thinking “That doesn’t look so bad. Its a blue jumpsuit with straps and pouches.”

I’ll give you that. But what about:

How does this view-piece work considering it’s covering an empty eye socket?

They also decided to revamp the SHIELD standard-issue uniform:

Are we sure that Hydra isn’t involved in this decision?

Anyway, in-between issue 2 and 3 of this series Nick Fury and SHIELD appeared in Captain America 440 and they had all dressed in their classic look, as seen below:

(Maybe we should talk about Falcon next…)

And in Nick Fury’s first appearance after the “FURY of SHIELD” series finished he and his troops dressed in their regular blue jumpsuits again, and that’s how it was for every appearance since.

From Double Edge: Alpha #1. The comic with ALL the edge.

Nick’s visual-scanner eye-piece and funky costume appeared in 3 issues of his 4 issue mini-series before being forgotten.

Heart of the Hawk Part 1 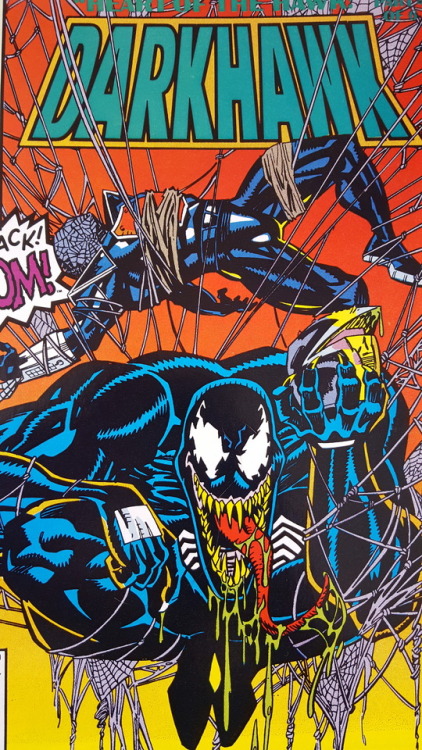 Ah, 1996 … right about the exact moment when the comic industry, riding high on record-breaking sales figures and a diversity of publishers and material that hadn’t been seen in decades, went completely batshit and drove the bus right off a cliff by simply assuming that fans would buy just about anything, as long as it was marketed properly (which, in the 90s, was either sex appeal, or the collectability / gimmick factor).

If you wonder why hundreds of thousands of readers threw in the towel in the last couple years of the century, I give you Exhibit A from our Canadian friends at Catfish Comics.

Here, we’re tapping into not just one, but two red-hot sensationalistic trends of the time – ‘Bad Girl’ comics of wildly varying quality, and the swimsuit pin-up issues virtually *every* publisher was flooding the racks with.

This was when we started scraping the bottom of the barrel: the wannabe Rob Liefelds and Jim Lees got too lazy to even lightbox Penthouse spreads and add in guns, knives, and blood, and just started to hire amateur models in swimsuits or cosplay gear for photo covers, not even bothering to enlist actual professional grade photographers.  Assassins?  More like the Spring Break special discount at Sears Portrait Studio with a rather unusual choice of props.

Not to mention probably the most uninspired logo in the history of comics, straight off a drop down menu from a '1001 Desktop Publishing Fonts’ CD-ROM, because why bother actually making a legitimate attempt at some sort of grindhouse-film-on-paper art?  Duuude … there's REAL-LIFE cute girls in bikinis.  Even back in the era of America On-line and 56K modems, you could still find better quality eroticism on the internet for free, that didn’t come wrapped around a mediocre comic for two-and-half bucks.

Now imagine longboxes of this lowest common denominator being dumped on the racks every week, alongside a tidal wave glut of pre-fab instant collectible product with every glow-in-the-dark holofoil cover polybagged with a polybagged mini-comic inside that had an exclusive limited-edition trading card polybagged inside of THAT, and you can see why actual readers got fed up and leapt off the cliff like lemmings, and creators threw up their hands and wondered why they even bothered to put effort into actual storytelling.  With half the publications sealed in browse-proof plastic and the other half of them looking like amateur porn mags, just walking into a LCS in that era started to make you wonder if you weren’t in the wrong kind of bookstore.

If you’re gonna do sleaze and expect to get paid for it, at least do it *well* and with some verve, and not something exclusively aimed at thirteen-year-old boys who couldn’t buy a copy of Playboy, but could blow their allowance on an armload of this. 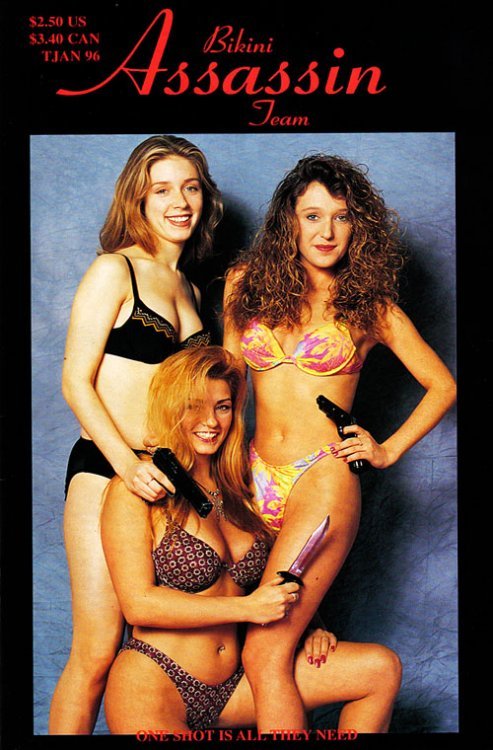 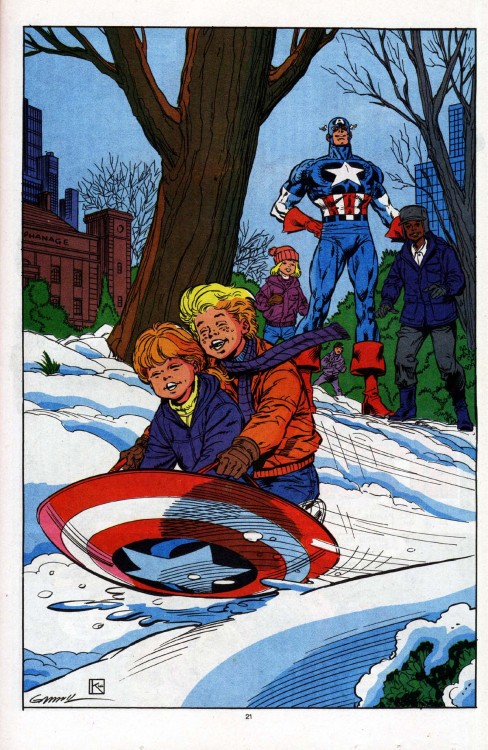