On Rufeng Sect’s Spirit Summoning Stage, Xu Shuanglin watched the scattered golden lights in the night sky. He was suddenly reminded of the piece of paper he threw into the furnace that one snowy Lantern Festival Night.

It burnt into ash in an instant, with only specks of embers remaining to scorch him despite the years that passed.

I hope that we three, Luo Fenghua, Nangong Xu, and Nangong Liu can be friends and family for life.

But Nangong Xu no longer exists in this world. It’s Xu Shuanglin who stands here today; Xu Shuangli who is a madman, a demon, a person who crawled from the depth of hell to demand the lives of all the good men in this world.

There will never again be Nangong Xu.

He, like his name, has drifted away, alone, floating somewhere between the vast heaven and hearth.

Years crushed by, even rocky cliffs shatter and break [1]. Not to mention this a small insignificant puff of willow catkin.

It’s been so many years. The willow tree has become old. The magnificent maple has started to fade. The floating catkins wander in the wind [2]. What was seen through and through was not all the world’s flowers, but blood soaked mountains and plains and the hatred covering heaven and earth.

南宫絮 (Nangong Xu),  南宫柳 (Nangong Liu), and 罗枫华(Luo Fenghua)’s names are invoked in the last paragraph of this passage about them and passing time.  I wanted to only translate the last part at first but it didn’t provide enough context, so I expanded the passage.

There’s something haunting in this paragraph from Meatbun. Things that are images of splendor and spring have been taken and made desolate with the passing of time. And beautiful willow catkins and youthful dreams are replaced by blood and hatred.

I just love this passage and wanted to share and point out the wordplay Meatbun did in her use of imagery.

[1] Literally bones slip/grind and tendons separate. But shatter and break seem to work better in english.

[2] 飘 is to float but implies in the wind so i broke that up. 游游荡荡 indicates wandering but not necessarily in the wind. fun note: Gone with the Wind is translated into chinese as simply “飘”.

Chu Wanning: “I have bad temper”

Mo Ran: “You look younger than me”

Hello, there are a couple of similar tropes these novels have in common:

- Both have a shizun. SV has Shen Qingqiu. 2Ha has Chu Wanning.

- Both have a “blackened” male lead who started off innocent and poor who then become emperor with a harem. SV has Luo Binghe. 2Ha has Mo Ran (with a much smaller harem).

- Both have some abusive behaviors from the shizun to the disciple early on (explained in MUCH more details later on, as Mo Ran is a very unreliable narrator) that lead to the tension between the MC and the ML.

Asides from that, no, I do not think they are similar. Both have a bunch of tsundere side characters who are arguably more interesting for me than the leads. The main leads Mo Ran and Luo Binghe both experienced a Despair Event Horizon to cause the Face-Heel Turn, as do 99% of main characters in novels. [spoilers] They also are both of “special” heritage, as are 99% of main characters in YA novels. [/spoilers] The shizun-disciple trope is extremely old in Chinese fiction. The transmigration trope is played differently between the novels. Mo Ran’s protagonist journey is extremely different from anything depicted in SV. The settings are different, the magic are different, the entire plotlines have nothing in common with each other, the resolutions are different, and most importantly, SV is a satire of these tropes, and 2Ha plays them straight.

Chu Wanning was still kneeling. His legs had gone numb a long time ago. 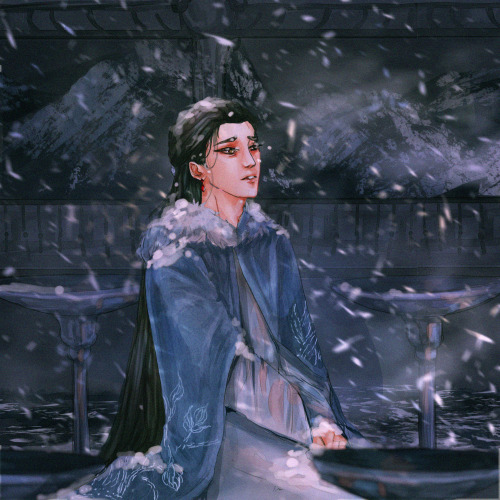 I agree! I think the 2ha universe is a lot less homophobic than other danmei universes I’ve seen. The biggest problem with Ranwan was the master/disciple thing, not that they were both men. It was established that men had sex with men in the first few chapters, hence the male prostitute. Even Xue Meng admitted that that was a thing people did regularly. And the existence of Jiang Xi/Xue Meng as well as Shuangmeimeng/Meimeng fanfics in-universe really drive that point home. Although, there is still the existence of Empress Song Qiutong, so the appearance of having a Mother of the Nation still seems to be a pressure that Mo Ran caved into (can be argued that he was looking for the closest thing to a Shi Mei, and it so happened to be a woman though).

My heart: awww who wronged kitty?🥺

Yes here! Newest first to oldest. (Left to right). I think there’s still more but idk where lolol. With how I portrayed the character, I think the second one is my favorite bc I think it encapsulated the realism and his general youth fairly well compared to the others but I like the shading on my most recent the most #2ha, #erha, #dumb husky and his white cat shizun, #ranwan, #二哈和他的白猫师尊, #i wish i was one of those people that could create fanworks AS they're reading/watching a thing but i cannot do that i have to like, #inhale content at an alarming speed and then spit out whatever i make as a result, #oh well. throws more content into the 2ha tag, #my art, #sketch
25 notes · See All
fulltimehabibtiText

#how does it keep getting HORNIER?, #2ha
7 notes · See All
crudemoonText

what are we suppose to read after mxtx’s novels and 2ha? like those few are the really big, popular novels that i’ve seen, but what’s the next step?

Too lazy to do the tumblr format so here, have what I did for my fic promo twt.

- 5k, E-rated Shuangmeimeng, modern AU
- Xue Meng had a nice dream and woke up to a surprise
- Read all the tags
- Mei Hanxue gege seniority rights I think 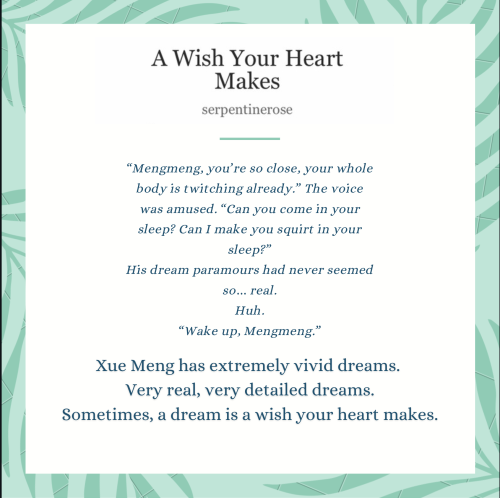 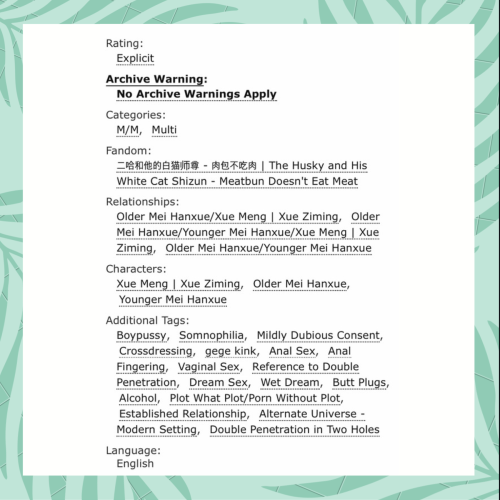 your god is still crying #2ha, #erha, #dumb husky and his white cat shizun, #ranwan, #where's that jfk meme that's like //my day be so fine. then Boom tianyin pavilion//, #i feel that shit every day since i read those chapters, #my art, #fanart, #二哈和他的白猫师尊, #i am: done with tumblr fucking the image quality straight up the ass. no lube no nothing. just Fucking it completely
48 notes · See All
choowanningAnswer

Um. Baby is left alone by everyone basically. 🥺😭 but it’s ok because he is resilient and will cope with it. He just didn’t have to be so ALONE you know. Meatbun what’s wrong with you. Why did you do this to my baby. I’m stealing custody I think.

Yes, actually, Xue Meng was already considered strong before! Chapter 123 established that not only did he win the Spiritual Mountain Competition, he also made a name for himself in the 5 years Chu Wanning was in seclusion by protecting the ENTIRE lower cultivation world with Mo Ran, since the upper cultivation world put up a barrier between the two worlds. In fact, they did such a good job that the barrier was eventually deemed unnecessary when no more demons and monsters surfaced.

The epilogue also established him as a capable and powerful Sect Leader, bringing Sisheng Peak to top 3 among the sects (right after Guyue’ye and Taxue Palace). Xue Meng was courted in the extras for his status by the Jiangdong Hall sect leader (unsuccessfully). In some ways, his youth will always stand out until it doesn’t anymore, but he has always been considered strong!

(NOTE: Spoilers for 2ha and for Scum Villain)

The main character is an EXTREMELY unreliable narrator. Early on in the story, he is constantly talking about how much he hates his shizun, and how cruel his shizun is, but despite all his thoughts in that direction, there’s not actually that much evidence it’s true? Like the only mean thing I’ve actually seen Shizun do is punish Mo Ran for crimes he literally committed…and then lied about committing and tried to get away with. So, like, yes the punishment is a little harsh but it’s also the standard punishment for what Mo Ran did, and Mo Ran actually did all of the things he was accused of, so it’s like…oh no, area man faces one actual consequence for own bad behavior, poor him.

Beyond that, based on what I know of events to come, I think what you’ve heard is probably vastly inaccurate and based on the impressions of people who started the book, didn’t like it, and gave up. Because the beginning is a total misdirect and almost everything Mo Ran leads us to think about people other than himself (and even himself sometimes) is wrong in one way or another. My impression of how the fandom reacts to Shizun is that he’s a lot like Lan Wangji.

Or, put another way…if you liked Scum Villain (I haven’t read Sha Po Lang so can’t speak to that) I think you’d probably like their dynamic, cause Mo Ran is kinda like Luo Binghe, especially post-fall Luo Binghe (and, early on, Mo Ran is like pre-system-intervention Luo Binghe…), when he thinks Shen Qingqiu tried to kill him and acts out as a result. Chu Wanning (the Shizun in this) is sort of like a cross between Shen Qingqiu and Lan Wangji? A bit older, very unsure of himself, thinks an ocean and says exactly 1 (one) word.

Like, as far as I know? There is literally zero actual cause to think Chu Wanning is abusive. Canonically, Shen Qingqiu is almost certainly more ACTUALLY abusive toward Luo Binghe, since before he’s possessed by Shen Yuan he is indisputably awful to Luo Binghe, and even after…like…he literally kicks Luo Binghe into hell when he could have said, “hey, Luo Binghe, I need you go down to hell and I can’t tell you why, will you do that?” and we all know Luo Binghe would have absolutely and unquestionably done it, without the whole “stabbing him and pushing him over a cliff” part.

Chu Wanning is LESS problematic, as far as I know.

But like I said…I’m only 9 chapters in so I can’t say for sure.

@thegreymoon, @jupiterjames one of you want to field this better? Neither of you have read Scum Villain as far as I know but maybe you can at least speak to the concerns that Chu Wanning is abusive?

#ranwan, #2ha, #2ha spoilers, #i miss talking about 2ha nonstop, #but i also don't feel like being annoying over it on twt anymore so, #im only being annoying here bc i can use the read more tab and basically talk alone lmfao, #in other news meatbun thanks for my life
5 notes · See All
choowanningAnswer

So the rumors go. I really hope so. That boy was not introduced during the epilogue as “glowing faintly like starlight” for nothing.