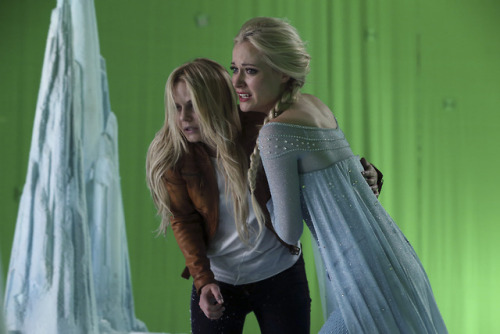 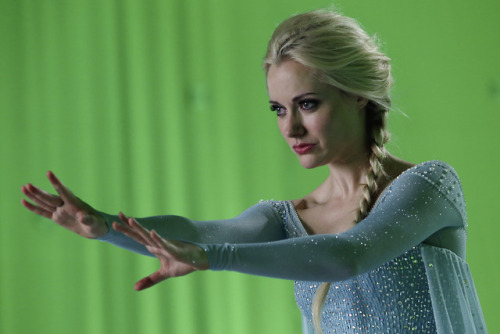 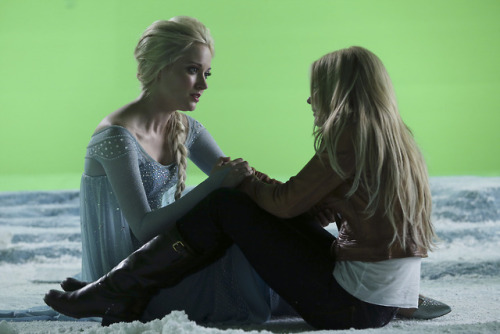 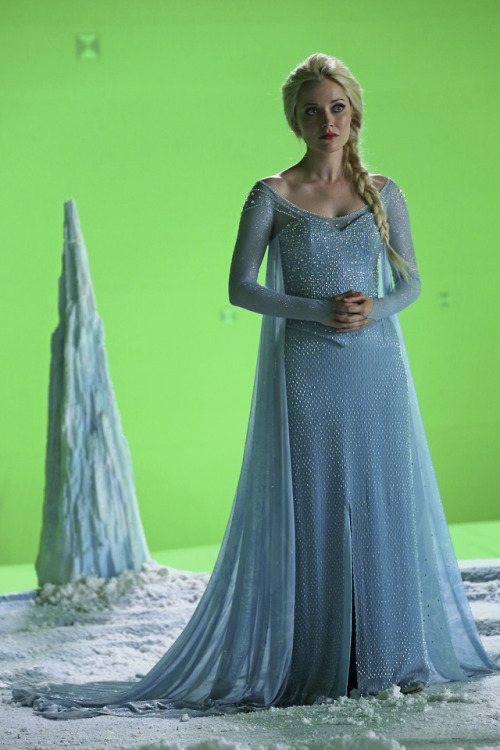 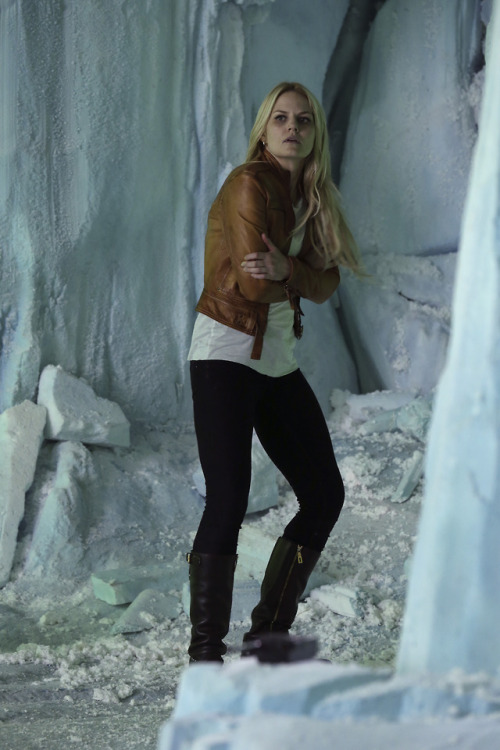 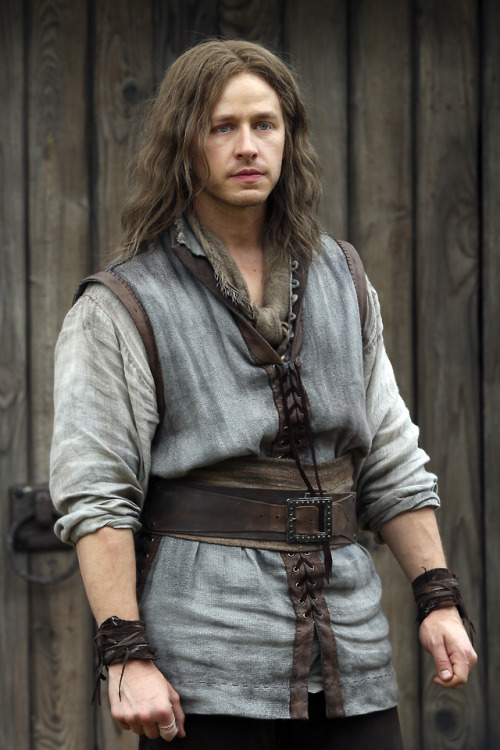 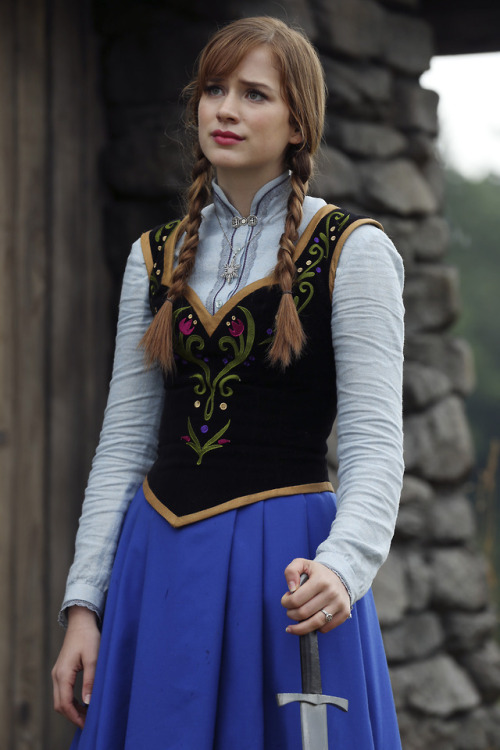 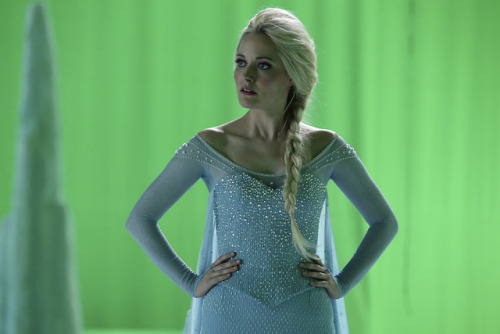 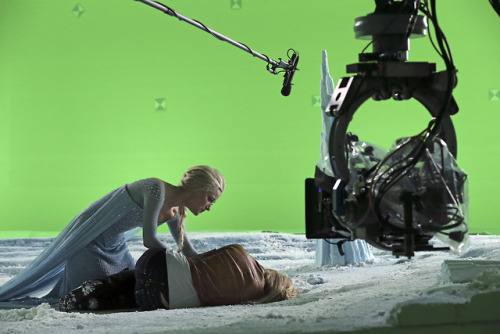 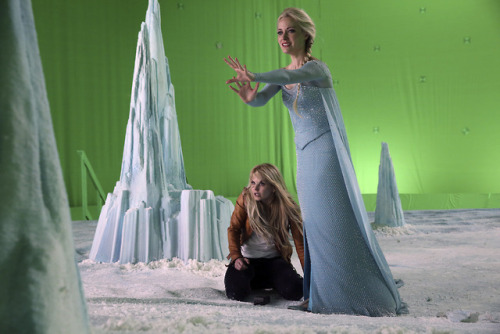 EMMA FINDS HERSELF SLOWLY FREEZING TO DEATH WHEN ELSA TRAPS HER INSIDE AN ICE CAVE, AND IN THE ENCHANTED FOREST OF THE PAST, ANNA TRIES TO TEACH A MEEK DAVID TO FIGHT WARLORD BO PEEP - WHO IS THREATENING TO TAKE HIS AND HIS MOTHER’S FARM AWAY IF THEY DON’T PAY HER PRICE, ON ABC’S “ONCE UPON A TIME”

“White Out” - While desperately trying to find her sister Anna, Elsa is startled by Emma and accidentally traps them both inside an ice cave, with the frozen temperature placing Emma’s life in peril. Regina, depressed over her likely breakup with Robin Hood, secludes herself away from the town and Henry, which saddens her son. And with the townspeople considering Mary Margaret their leader, she faces her first leadership task in trying to re-start a generator and restore the town’s electricity after Elsa freezes and damages the power lines. Meanwhile, in the Enchanted Forest of the past, Anna tries to teach a meek David to fight Bo Peep, a brutal warlord who is threatening to take his and his mother’s farm away if they don’t pay her price, on “Once Upon a Time,” SUNDAY, OCTOBER 5 (8:00-9:00 p.m., ET) on the ABC Television Network.

“White Out” was written by Jane Espenson and directed by Ron Underwood.

—Once Upon a Time, “White Out”

Another favorite in this episode is when Henry yells at Regina through the door. “AND I MISS MY ROOM”!

Frozen Swan is EVERYTHING.

Is anybody else a little miffed that the two deleted scenes released of Snow/Regina and Rumple/Henry are better than 95% of what was in the actual episode? Who is editing these things?

#4.02 White Out
134 notes · See All
thatravenclawbitchText

Regina sent a fucking Raven to tell Henry to leave her alone. She couldn’t just shoot him a text or an e-mail. Nope, message via Raven.

She may no longer be the Evil Queen, but she sure as hell is the Drama Queen.

My take on what the Golds were up to in tonight’s episode.

The air was colder.  Gold could see his breath suspended in the air.  He stretched his arms over his head.  What was going on? Storybrooke had always had some odd weather, but this was ridiculous.  It wasn’t supposed to freeze for another couple months.

“Sweetheart.” He gently rubbed her shoulders.  He couldn’t just let her sleep.  The temperature was dropping.  The house was isolated from the rest of Storybrooke.   While that had once been a good thing (no interruptions), it was now a problem.  With cold came snow and they did not have the provisions to be snowed in some stranger’s house.

Rumplestiltskin smiled.  She was always adorable. He was tempted to just use magic to keep them warm.  They could stay here, happy and safe without whatever disaster was going on in town.  But Belle wouldn’t stand for it if she knew.

Still he could give her the time she asked for.  Rumplestiltskin tried to turn on one of the lights.  Power outage.  Worse than he thought.  He wasn’t even sure if anyone in town really could fix an electrical problem. They’re had been a freak out on Miner’s Day and that was with everyone cursed.

He waited for her response.  It was small, almost a hum.  “Hmm Rum.”

He kept his voice light and soothing.  She was still half asleep.  “Sweetheart, I think we might have to head back into town early.”

Belle raised one of her hands to rub her eyes.  She blinked them and yawned.  “Is something wrong?”

“Possibly,” He waited for her to catch up.  She was always in a daze when she woke up, but she would catch on in a second.

She eyed him carefully.  “Is this a no-one-knows-how-to-run-this-town problem or a magic problem?”

Without replying, Belle wiggled her way out from under the covers and began getting dressed.  She had pulled on her dress when she glanced at him.  “I thought the point of you waking me up was to get back to town.”

Belle grabbed a pillow and threw it at him.  “If the Charmings didn’t come to you every time there was a problem, you’d get to do more than admire.”

Rumplestiltskin chuckled at that.  She was irritable on little sleep.  “I don’t want to do this any more than you do.  It’s just better if no one else finds this place.”

Rumplestiltskin took a deep breath, trying to calm himself.  “One hour.  We’ll just be in the shop an hour.  Then they can sort out their own mess.”

“That should give us some time to run through some of the paperwork.”

She squeezed his hand.  “I ran the shop while you were away,” she almost choked on the word but she refused to say dead.  “Legally, it’s mine.  We need to fix that.”

“Of course.  We’ll need to change the sign too.”

“More than anything.  Belle I want to share every bit of my life with you.”

Despite the fact, he was soon holding his true love tightly in his arms, Rumplestiltskin felt uneasy.  It was true, more than anything else.  But he was still keeping secrets.  He felt a shiver run up his spine that had nothing to do with the cold.

So I’m not sure how I feel about the episode.

I liked certain parts like the Anna and Charming backstory, but I’m still not sure on the episode as a whole.  Especially the Regina-Henry storyline.  I mean he’s your son, your true love; you don’t just shut him out when you’re emotional.  That part just made me angry.  She’s heartbroken yes, but how long has she known Robin?  Roughly a year.  Regina raised Henry.  He knows her better than anyone and he wants to help her.  His basket of goodies was literally the cutest thing in the entire episode.  She’s putting herself first again and that doesn’t bode well for me.

Also how on earth did Snow solve the electricity problem?  The pipes and circuitry were frozen.  That doesn’t just get fixed by turning on the fuel.   It just goes against basic mechanics.

But I’m being negative.  I feel like we’re finally getting somewhere again.  Charming had a storyline that isn’t complete Snow centric.  We have Emma actually making friends and finding someone who can relate to her (and vice versa.  I really want to know why magic was so rare in Arendelle now). Mary Margaret being feistier.  I loved some of her sleep-deprived rants.

I will be honest.  I typically hate Hook.  I just feel his redemption arch was too sudden and all of his scenes are just him forced in there without really adding much to the plot.  That was not so much the case for tonight’s episode.   I feel like the writers straddled the divide between hero and villain better tonight.  He has some lines that reflect his thought process as a villain (“Kill us off one-by-one. That’s what’d I do.”) but also moments where we see that he cares about Emma’s safety.

My favorite part though was the Charming and Elsa interaction.  He is so sincere in talking to her.  He is desperate to see his daughter alive and well, but after learning more about Elsa, he doesn’t vilify her.  He simply speaks about Anna, what she told him.  They both can relate to having been changed by Anna.  They connect over the common ground and Elsa is able to save Emma.

As I’m me, there was not enough Rumbelle.  But I still appreciated the two of them working in the shop together.  It was adorable.

The previews excite me.  I’m a huge Snow Queen fan, the original mind you by Hans Christian Anderson.  I love Gerda and Kay.  I just want them to show up in Storybrooke.  I was outraged over Frozen.  Everyone was cooing over it and I was just like,  What happened to my favorite fairytale. I’m hoping OUAT can set somethings to rights.

I mean, what was the point? I guess Elsa got integrated to the main cast, but otherwise this one is going down with “The Tower” and “Selfless Brave and True” as meh episodes. I like Charming, but his centrics tend to let me down.

Not enough Rumple, not enough Belle, not enough Regina. Those are my three favorite characters and they had a combined 25 seconds screen time tonight. Also, I was under the impression we were getting a Grandpastiltskin scene in tonight’s episode and that didn’t happen. Why were Rumple and Belle taking apparent inventory of the shop? One night of wedded bliss in a stranger’s house and it’s back to work? It would have been better if they’d been hooking up when Charming and Hook interrupted. I mean, that’s straight out of fanfic.

Anyway, I wasn’t expecting much out of this episode so I’m not disappointed. I figured we’d get maybe one scene of Rumbelle, but I was expecting more Regina. I enjoyed Snow’s wtf moments, Charming’s wig gave me a giggle, and it was nice to see Ruth again. I look forward to seeing Anna visit Rumplestiltskin. It’s always a treat to see that golden faced bastard. Hells fucking yeah to Elizabeth Mitchell’s Snow Queen, though! What a way to end the episode! I wasn’t expecting her to make an appearance so I pretty much squealed. Definitely looking forward to seeing more of her.

#ouat spoilers, #4.02 White Out, #lackluster is the term to describe this episode
17 notes · See All
wildcatmediaText

I tried to watch it on the website but it wouldn’t play :(