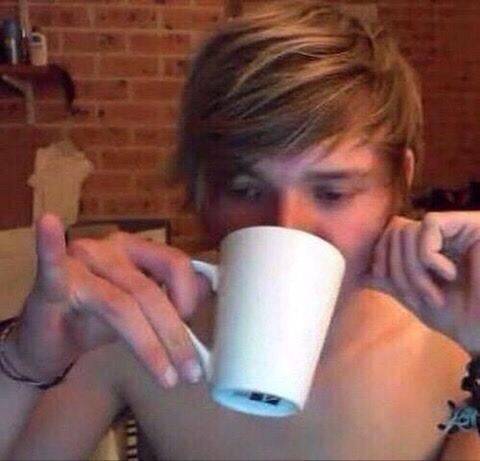 HI I FOUND THIS PICTURE OF ASHTON AND MADE THESE REACTION PHOTOS, USE THEM WISELY :)

i’m literally not even apologetic about this

Reese couldn’t quite remember what day of quarantine they were in. 84? Maybe 85. Not that it mattered. The days just bled into one another, which was even more difficult during the end of the semester when everything was online, graduation had been justifiably canceled, and she hadn’t seen friends and family in those eighty-something days she’s been locked in the apartment. Of course, she knew why it was necessary, wouldn’t ever risk going outside and coming in contact with others for any reason other than restocking on groceries. She just missed being able to go outside.

If there was a positive in being in lockdown, it was her roommate turned boyfriend.

Calum, who enjoyed going out as much as he did, who was a soccer player who loved being on the field, was going as out of his mind as she was. They entertained themselves as much as they could; finding new shows and movies to watch, playing games, trying out new recipes to cook, FaceTiming their family and friends, working out—well, truthfully, Reese most of the time just watched him—and, of course, sex. Lots of it. Everywhere. Just because they could.

When it came to keeping herself entertained, Reese found herself drowning in the endless videos available on TikTok, scrolling for hours, sending the ones she thought were hilarious to friends she knew would appreciate them. One of her favorites ones were those of people covering themselves with just a towel and walking in on their partner and tossing the towel to get their attention, and Reese had found herself considering why she hadn’t tried that one yet. She never thought she’d be someone who would post videos on TikToks, but she did a couple of those dance challenges, post a bunch of videos of Duke, and they all seemed to do pretty well. So might as well, right?

She woke up one morning—maybe it was the 87th day of quarantine—and decided to take part in the get naked challenge. Calum was already awake, so she took the opportunity to hop into the bathroom to take a shower. Reese dried herself as much as she could afterwards, not really caring for her short damp hair, and grabbed her phone from by the sink and started recording the video, making sure her towel was secure around her for the time being.

Keeping the camera pointed to her feet, Reese walked down the hall, and as she neared the living room, she suppressed a scoff when she heard the familiar sounds of Calum playing a video game. He was playing with other people, from what she could hear him saying into his headset, and she rolled her eyes to herself. What a guy. He’d look like every other dude who unwittingly took part in this challenge, but Reese didn’t care much. She’d have her fun either way.

Making sure the camera was on him as she emerged from the hall, Reese noted that Calum was fixated on the TV, fingers flying over the controls. His profile was to her, so maybe he didn’t actually see her, and Reese bit back a laugh. This would be too good.

She used her free hand to undo the knot that held up her blue towel, letting it unravel from around her body, instantly feeling the chills on her body as the cool air came in contact with her naked skin. Instead of saying anything, Reese merely tossed the towel at him, doing so in a way that it landed right on top of his head, obstructing his view of the TV.

“What the fuck?” he grunted, hastily grabbing the towel to pull it off his head.

Reese watched, still holding her phone, as Calum frowned at the damp towel in his hand before glancing to his left. Giddiness fluttered her stomach as he, quite comically, did a double take. It wasn’t often that Reese startled Calum into speechlessness, but she cherished those moments. She watched as his mouth dropped open and he gaped at her, but that expression only lasted for a split second.

Instantly, his dark eyes were shamelessly roving over her skin, one corner of his mouth curling up into a wolfish smirk. Calum’s gaze never left hers as Reese bit down on her grinning lower lip, watching as he didn’t break his gaze while saying into the microphone of his headset, “I gotta go,” before tearing off the headphones and dropping that with the controller onto the couch.

Reese let out a laugh at the look in his eyes, though her stomach churned with anticipation, ending the video right after he approached her on quick, soccer-playing feet, hands already reaching for her as he growled, “Good fuckin’ morning to me.”

She needed more of these TikTok challenges. They’d make quarantine with Calum all the more fun.

There were boxes everywhere, in every room. Just looking at them overwhelmed Elodie with a tightness in her chest, eyeing them as she tried to push down the panic. They were all labeled, thankfully, and were placed in the appropriate room they were meant to be unpacked. But there were just so many. She didn’t even realize she and Calum had so many things until their lives were more or less packed up into cardboard containers, waiting to be opened.

She had decided to tackle the kitchen first, while Calum had disappeared into the room that would be his little art studio to make sure all of his precious supplies were all in one piece, undamaged from the move. As Elodie opened another box, after having put away the glasses, bowls, and some electronic appliances, to see their plates packed neatly, she let out a sigh. For a moment, she regretted not taking up their friends’ offer in helping them unpack. But she and Calum were determined to do it on their own, to make this new apartment their home by themselves. She agreed with the sentiment but, God, her arms were already beginning to get sore.

Despite herself, she decided to take a break before emptying the box of plates. So she wandered into the living room, the room bright thanks to the large windows allowing for the natural sunlight to stream in, and collapsed onto the couch that was fortunately already there. Elodie laid down, right arm thrown over to cover her eyes while her left hung off the couch haphazardly, releasing a long sigh that nearly echoed in the empty of their apartment. Their big furniture was already around; the couch, tables, chairs, television, bed. Calum had yet to set up the TV and the stereo plus gaming systems they had, but at least they had Wi-Fi. Elodie wasn’t complaining. This was all a part of the excitement of moving into their new home.

Their new home. God. How exciting was that? She and Calum were no longer trading nights on one another’s beds. They were finally in a place of their own, where they shared one bed, a bathroom, a kitchen—the rent. Nothing had thrilled her more than when she and Calum decided to live together, and instead of her moving out of her and Dominique’s shared apartment into Calum’s, they decided to find a brand-new place that was perfect for them both.

They found one that wasn’t too far from the tattoo shop, had a beautiful view of the city they lived in, and amenities like a pool and gym that they would take full advantage of. It was perfectly sized for the two of them, with high ceilings and large windows and an open plan they both loved. And it was theirs.

Elodie lifted her arm from her eyes, gazing up to see Calum smirking down at her. His eyebrows were raised, arms crossed and Elodie allowed her gaze to shamelessly drink in the sight of his bulging, tattooed biceps, as well as the tattoos on his collarbones, all for her viewing pleasure thanks to the tank top he so graciously decided to wear. His smirk widened when he noticed her staring, and although Elodie’s cheeks flushed, she wasn’t embarrassed. Not anymore. “Maybe,” she hummed, raising her arms above her to stretch. One of her elbows popped and she let out a short chuckle. “You left me to do all the heavy lifting in the kitchen.”

Calum shot her a look, though the amusement was dancing in his dark eyes. He grasped her hands, pulling her up in a seated position, and he leaned down to keep his gaze leveled with hers as he said, “If you wanted help, you should’ve said so.”

Elodie pouted, fingers interlacing with Calum’s. “What I want is for tiny little elves to unpack for us so we can test out the new bed.” Calum’s eyes widened at her words, and she felt a swell of pride knowing that even now, she still managed to catch him off guard. It wasn’t often, but when it was, his reactions were the best. When his lips parted, Elodie feigned a sigh before shrugging. “But I guess that’ll have to wait. We’ve got a kitchen to unpack.”

She stood up and pushed past him, feeling a giddy giggle fight its way up as she felt his gaze burning into her back as she walked into the kitchen. Elodie innocently hummed to herself as she kept herself busy, all too aware of her boyfriend slowly following behind her. The box was already placed on the counter underneath the cabinet the plates were to go in, and Elodie used the three-step stool to give herself more height to easily place the plates on the shelf, only really needing the bottom step to boost herself.

Just when she grabbed three more to put up, intimately familiar hands grasped her hips and Elodie tightened her grip on the plates, pressing them to her chest. Calum pulled her close, and because he was significantly taller than her, even while she was on the step, he brushed his lips against her ear, easily enticing the butterflies in her stomach. “I think the plates can wait,” he murmured, his voice a low rasp that sent a shiver down Elodie’s spine.

She fought her lips from turning into a smile. She may have been tired from unpacking, but she’d never be tired of Calum. Still, she had grown into the fun habit of teasing him—which never really lasted long. “We’ve got to finish at least one room, Cal.”

“I finished my studio,” Calum told her, fingers digging into her hips, lips trailing along her cheek, leaving a fire in their wake. “The bedroom can be next.”

Elodie knew she’d lost the battle the second she mentioned the bed earlier, biting her grinning lower lip as she carefully put the plates away. As soon as they were out of her grasp, Calum turned her around and Elodie let out a startled laugh before it was silenced by his lips on hers. She really did mean to unpack the kitchen fully, but an important part of moving into a new home was to christen it, wasn’t it?

My religion is Ashton Irwin singing 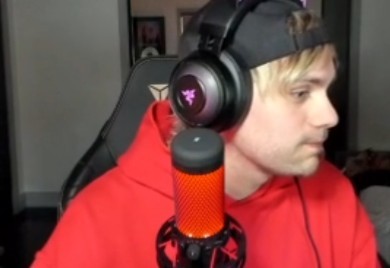 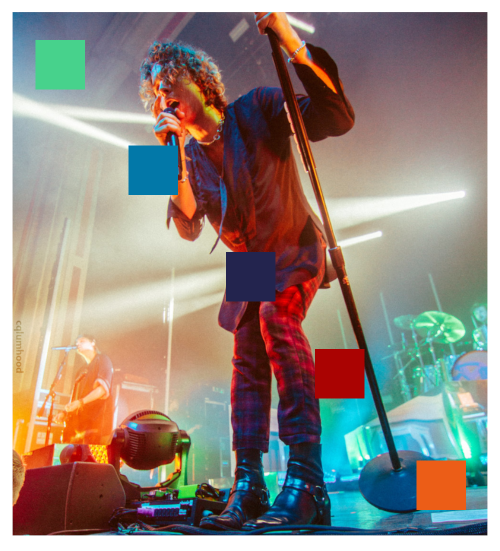