are y'all actually kidding me “All for one’s last name is Shigaraki therefore he can’t be Midoriya’s dad” what the fuck that’s so stupid do y'all think this man who’s terrorised and killed thousands of innocent people draws the line at IDENTITY FRAUD OF ALL THINGS?????? Do some of y'all GENUINELY believe that he’s incapable of saying that his name is Midoriya Hisashi??????? Do y'all actually think that All For One, someone who’s so INCREDIBLY well known in the underground and one of the most well known villains out there, would NOT conceal his identity??????????? “Oh, I’m perfectly fine with vaulting my brother and turning my enemy’s grandchild into my successor as revenge against her and HER successor but if I say my name is Midoriya Hisashi that would be too much :(” ?????????????????????

#bnha manga spoilers, #dad for one, #bnha, #nooty texts, #this was longer than I thought it would be, #please someone explain this argument is making me so confused, #dfo, #afo, #all for one, #Midoriya Izuku
5 notes · See All
trixytheunicornText

Me: In all my life I didn’t think I’d get canon AfO talking like that. But here we are.

Honestly though, AfO is really, really talkative. What’s up with this guy?

AfO is such a monologer villain. He’s like everything Villain Deku-ists dream of and more.

Also, I love bnha and all but the concept of all quirks carrying with them their previous owner’s consciousness, however alluded to in the past, is just out there enough that it feels overpowered.

WAIT DOES THAT MEAN WE’LL NEVER GET ALL MIGHT FULLY IN THE MINDSCAPE BECAUSE HE DIDN’T HAVE A QUIRK TO BEGIN WITH AND THUS DIDN’T HAVE THE QUIRK-CONSCIOUSNESS-WHATEVER-IT-IS TO HOLD THAT PART OF HIM THERE?

WHAT WILL THIS MEAN FOR MIDORIYA AND THE VESTIGES?

The Symbol of Terror. Okay then.

First has enough chill to go around apparently

AfO has no mercy with his jabs man

When he says Midoriya’s “master” is he referring to All Might or Nana?

AfO is giving big Nighteye vibes here and so I’m seeing that this could go one of two ways:

YOOOO FIRST YOU SAY IT.

but also “This young man is possessed by a drive to save others that eclipses all common understanding” is such a funny statement to me. Like, “yeah this kid is so good we don’t even understand how he can be that good but he’s ours now and we’re keeping him”

So we kind of got the first way I mentioned, so I’ll count it.

What on earth is going through Todoroki’s mind watching all this? He’s dead. My friend’s dead. Or quirkless. He is not going to survive.

Meanwhile, Dabi’s having the time of his life.

…and Toga’s having a crisis. I wonder how this will go? She’s got so much faith in Midoriya and Uraraka, and I’d like to see if there’s deeper reasoning for that. Since she’ll most likely encounter Uraraka first, whose whole deal is that she wants to (and regrets not being able to do so in the Overhaul Arc) save people. This might be a game-changing event for Uraraka, who is already feeling rather abysmal about where the future is heading. Will she see the humanity of Toga and hear her out, or will she not listen for fear for her life? She’s got a big heart, she might end up sympathizing and having a crisis.

Well, thanks for anyone who stuck around for this! Sorry it’s kind of long-winded, I just finished writing an essay a few hors ago so I’m still in analysis mode.

#bnha 287, #midoriya, #nana shimura, #bnha, #afo, #ofa, #I'm not sure if I want to call him ofa or not bc I tend to get confused btwn them but that's what he's called... but first has a nice ring, #I'm so sorry I would've put a read more break but I'm on mobile and have no idea how to do that, #i am gradually catching up!, #bnha manga spoilers, #liveblogging, #ada thinkthunk, #ada rambles, #i guess? since it's so long??, #long post
2 notes · See All
ao3feed-izuku-midoriyaText

Deku has become a villain - a quite well known one at that. All For One takes young Midoriya under his wing and helps train him and his quirk. Challenges and obsticles. Friendships and realtionships. It’s all an adventure.

I just realized, whenever I read a fic with AFO, I picture him as Colonel Sanders

#why does my brain do that, #i KNOW that's not what he looks like, #why am i so weird, #all for one, #bnha, #mha, #afo, #my hero academia, #Colonel Sanders
7 notes · See All
birch-drawsText

look, just because they’re on better terms now doesn’t mean Hisashi isn’t trying to off all might anymore. He’s just getting more creative about it. 🙈🥦🌚

#all might, #dad might, #dad for one, #can you tell I dig dad for one yet?, #mha, #bnha, #art, #my hero academia, #boku no hero academia, #izuku mydoria, #Deku, #yagi toshinori, #meme, #hisashi midoriya, #afo, #comic, #comedy, #funny, #fic, #Afo and allmight being reluctant “friends, #AfO still makes life hard for Toshinori, #my, #does this count as a new ship?, #crack ship, #afo x ofa
139 notes · See All
sweetness-popText

Here are all the pics from Picrew, with the exception of 1 from Charat Rouge, that I made of the young and beautiful late Elena Yagi, the lover of Masanori Shigaraki aka All For One, and birth mother of Toshinori Yagi aka All Might.

This is the very 1st pic that I made to show how I imagined what Elena looks like if you haven’t seen it. And here is where you can find my description of her true appearance if you haven’t read the story of how AFO first met the love of his life.

#my hero academia, #boku no hero academia, #mha, #bnha, #Elena Yagi, #elena yagi(oc), #all might's mother, #afo's lover, #all for one, #afo, #afo shigaraki, #Masanori Shigaraki(AFO), #all might, #Toshinori Yagi, #afo is toshinori yagi's father, #all credit goes to picrew and charat, #elena was between the ages 20 and 21 in the pics, #my ocs
6 notes · See All
im-trash-dont-mind-meText

My dudes of the MHA fandom, I have further possible weight to the Hisashi = AFO Theory.

The name Hisashi means “Long time director” or “ruler” That remind you of anyone??? A possible long time Director of Villains??

#BNHA, #All For One, #AFO, #hisashi midoriya, #all for one is hisashi, #MHA, #Theory, #BNHA Theory
10 notes · See All
cyber-phobiaAnswer

There are many ways this can go down

Why Phone Calls Should Always be Private, A Memoir by All Might
by Reclusya

All Might interrupts a phone call between Young Midoriya and his father, one thing leads to another.

Series: Part 1 of Dad for One and his Phone Calls

Cat For One
by zinatina

Izuku finds himself stuck with a strange new pet.

AFO’s brother is fine and I don’t take criticism

“Enmeshed parenting robs the child of a chance at developing his own inner voice, confidence, and decision-making abilities.” 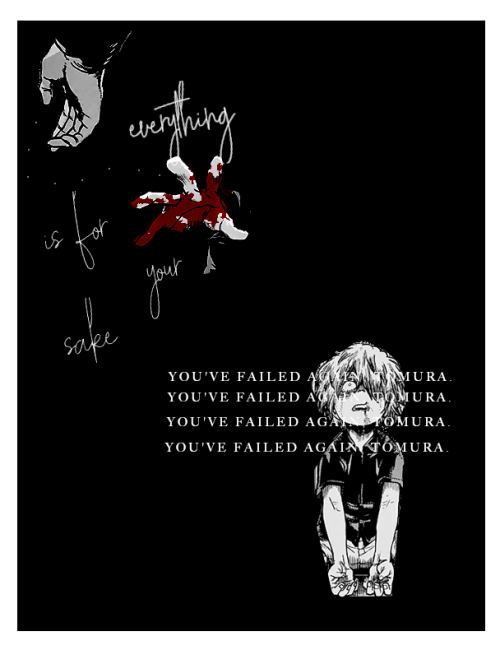 Bakugos final battle might be to see Deku’s value without a quirk, and Deku’s to value his life beyond being a hero

Headcanon ✨ Shouta had the floofiest cat ever when he was little!

im pretty sure he means his life. he’s specifically responding to all might (who himself was quoting afo talking about HIS remaining years to turn it around as a sort of gotcha):

all might DOES believe that those remaining years will be spent incarcerated, though.

OKAY i finally got a chance to look back at ch116, where afo talks about his motives irt shigaraki.

so he is dying, though i’m still suspicious of the idea that he can’t escape that fate. we know now he is attached to afo the quirk in the same way the holders of ofa are, so his ‘legacy’ isn’t as simple as just a successor. one of you sent an ask where you said we just don’t have enough information, and i think you’re right, but it is frustrating.

what caught my attention most is the way afo says ‘remaining years’ in the last image. it implies he either has none left, or that the entire idea of ‘remaining years’ is somehow null and void. it could also imply both—afo may die soon, while living on through the quirk he’s passed to tomura. would be nice if he could just die altogether though 💚💜

#shigaraki tomura, #afo, #ofa, #all might, #midoriya izuku, #gran torino, #hate that man. loathe what he says here, #long post, #i cant do a gd readmore cause im on mobile, #sry my posts are often v long u_u, #i did wanna look at this tho cause its been like over 100 chapters since we saw it, #christ
17 notes · See All
helga-grinduilText

the amount of fanfiction that depicts shigaraki as a r*pist/ab*ser/p*d*phile honestly concerns and disgusts me… like. ew. eugh. what.
also, today i saw someone on twitter ask something like ‘why villain supporters hate afo, he’s a villain too’, and im just. sitting there. what??? what kind of logic is that? wh-… ‘why’??? w o w.

#usual salt, #bnha, #boku no hero academia, #shigaraki tomura, #afo, #all for one, #bnha fanfiction, #i rly hope people who write this stuff are anime-onlys, #cuz if they're manga-readers it gets 100x fucking worse, #still bad tho
41 notes · See All
loripori-artsText

I have absolutely no idea how to use tumblr! 😃💓

In a desperate bid for information on the villains following the disaster at Kamino Ward, Izuku Midoriya is asked to visit with the ancient menace behind the chaos in what he thought would be a low-stakes gamble for some new leads.

I wrote a little All For One character study, “Somni Fabula”, now on Ao3!

#afo, #all for one, #shigaraki tomura, #shimura tenko, #bnha, #boku no hero academia, #bnha fic, #narrator's voice, #now it's time to apply for the AfO zine
3 notes · See All
Next Page