A little assemblage of some of the villain teams that debuted in the bronze age! From the top left: The Masters Of Disaster, The Female Furies, The Deep Six,The Forgotten Villains, The Fearsome Five, The League Of Super-Assassins, The Secret Society Of Super-Villains, The Injustice Gang, The Four Horsemen, and, my personal little-known favorite, The Anti-Justice League!

almost time for my dceu marathon, and guess which movie doesn’t get to be a part of it

I think it certainly looks hilarious - DC seems to have definitely learned in that department. And as a Stargate: Atlantis fan, I’m excited to see Jason Mamoa playing an Atlantean again. But as far as the actual story and characterizations go, I have yet to see proof anyone outside of Wonder Woman can handle that in the DCEU, and the Aquaman trailers are focusing so much on the humor and action that I’ve been left wondering about the movie’s other qualities.

So I’m a bit on the fence. I have my tickets already and I look forward to seeing it, but if the story and characters are weak like they were in Justice League (which was funny but overall forgettable), I won’t be surprised.

Batman V Superman was so great. Why didn’t they make a sequel to it?

I am 100% convinced that a decent score could’ve elevated Justice League from a bad movie to an okay movie. I don’t hate Danny Elfman, but he has his niche: weird, creepy, quirky Tim Burton movies. That’s his niche, and he’s great at it and Corpse Bride is incredible, but that style of writing DOES NOT WORK with a movie like Justice League.

The DCEU was built upon the echoes of a more brilliant and glorious vision (courtesy of the honorable Christopher Nolan, who is one of, if not THE best filmmaker of our time), and that vision—its style, its intensity, its weightiness, its emotional depth, even its coldness—needs Hans Zimmer. Hans Zimmer may not be the most “classical” of film composers, but he does very well what Danny Elfman cannot, and that is convey clearly and powerfully the emotion of the scene through music.

Danny Elfman writes music as an accompaniment to characters. His soundtracks are their own character, listening and reacting in the background: laughing, singing, crying. I love the intros to Corpse Bride and Nightmare Before Christmas, how quirky all the sounds are, how the instruments weave together to create the bustle of the scene.

But the DCEU doesn’t need that. The DCEU needs that low, ominous rumble, that understanding of emotional tension and resolution, that slow build from single notes on a piano into sweeping heartbreak as Bruce watches his parents die, that theme—two notes—as Superman arrives on screen for the first time in BvS, the sheer dramatic cheek of Luthor’s theme as we watch his feet walking in synch with the tempo: it’s music that you barely notice as you’re watching, but you somehow realize that without it, the scene would not be complete, that it would not be half as powerful if some gaudy, dramatic brass section and timpanis were announcing the action.

Justice League has this type of moment exactly once: When Flash and Wonder Woman are falling in slow motion. You know the scene, because you felt it too. It was powerful, and effectively conveyed the weight and anticipation of the moment, and then it was promptly ruined by some stupid director who decided to insert a sexist gag immediately afterwards.

What a shame that we were led to believe in a world so complex, so frightening, so powerful: god could become man, man could aspire to become god, heroes could become villains, people could aspire to be better, the best versions of themselves—and we ended up with some generic, feel-good, quip-filled, meaningless BS.

#Anti Justice League, #Anti Danny Elfman sorry buddy I love your other scores but this one was just terrible, #Hans Zimmer is a god and nobody can tell me otherwise, #CHRISTOPHER NOLAN, #WE HAD CHRISTOPHER EDWARD FUCKING NOLAN, #in other news I rewatched MoS and BvS this weekend
3 notes · See All
scruffylookingpiratecaptainText

My mother about Justice League: Life is too short to watch terrible movies. 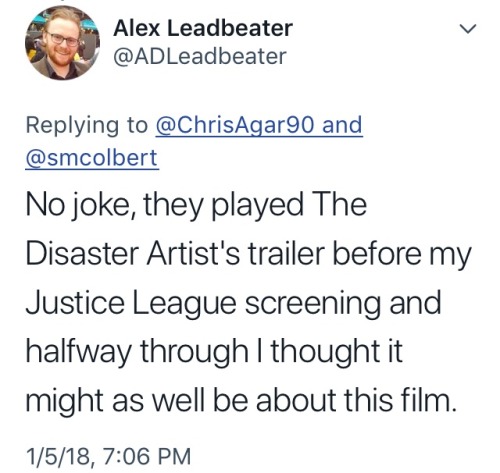 This is legit so sad tbh.

As someone who even read some Batman comics

This entire thing has disappointed me so much. But I have to admit, watching the background politics was entertaining, just like with Sony (Spiderman, Ghostbusters 2016) and Fox (Deadpool, Fan4stic) and it was especially interesting to see exactly how Box office bombs/disappointments happen and what wrong steps or reasons companies and directors take to cause them.

If you want to know exactly what happened as it happened, I highly recommend Midnight Edge’s youtube channel. They really know their stuff and sometimes even get plot leaks and behind the scenes stories before they become public. They were actually one of the first people to reveal Spiderman coming to the MCU 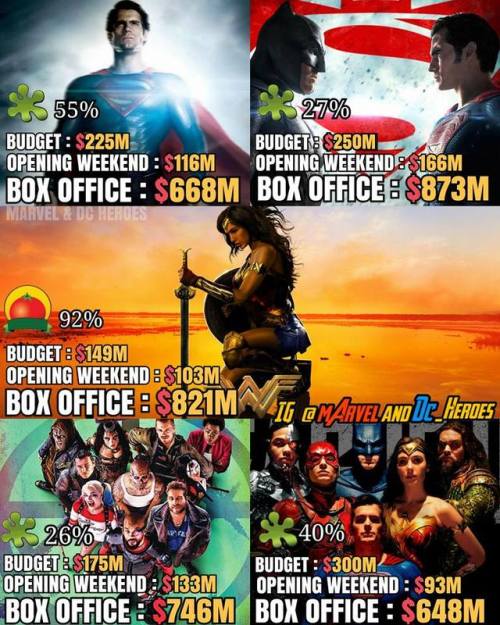 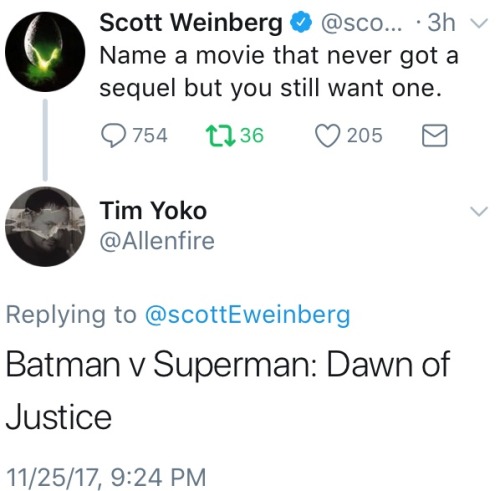 okay so i hate jl! barry allen he is so dumb wtf

Given the choice between watching Justice League again or this scene for 2 hours straight, I’ll take this scene.

Oh gosh I freaking hate that terrible design for Cyborg in the Justice League movie. I mean ALL the designs are crap but his is especially bad.

“Fueled by his restored faith in humanity and inspired by Superman’s selfless act, Bruce Wayne enlists the help of his newfound ally, Diana Prince, to face an even greater enemy.“ - x

Are you fucking kidding me? He spent all of “Batman vs. Superman” being a paranoid SOB, hating on Superman just because he was an alien (talk about xenophobic tendencies much?), and now his faith in humanity is restored because of Superman’s sacrifice? The same alien he tried to kill the entire movie?!? Bleah…

I’ve loved Batman all my life and I’ve always stuck with him in movies with conflict between Batman and Superman, but I’ve never been more disappointed in the character and ashamed of him, as I was while watching Snyder’s “Batman vs. Superman”. This Batman was not only dark, but also a psychopath. Never, ever did my Batman kill criminals for the fun of it or display so blatant disregard for human life as he did in this movie. And never, ever did he hate or want to kill Superman just because he was an alien and without a provocation. And never, ever did he let himself be so easily manipulated by a criminal, as he did here. I mean, where was the “world’s greatest detective” that I’ve always admired? My Batman was always one step ahead of the criminals and managed to counteract their machinations, but what happened here? Severe midlife crisis? I’m sorry, but as long as Snyder is directing the DC movies and Ben Affleck plays Batman, I will not watch any of their movies ever again. And I don’t care how much Batman “repents” in the following movies or that Superman isn’t even dead and they become friends. Snyder’s Batman has crossed too many lines for me to ever like him. And to think “Man of Steel” showed so much promise and I was so eager to give these movies a chance (despite hearing that Affleck would play Batman - I’m sorry, Affleck is a wonderful actor, but not as Batman).

Agreed and never. Anything would be better than Injustice series. XD

this is not relevant to the actual joss whedon justice league news, but i was just launched back to the absolute surreality of watching that movie in theaters and watching the scene where flash faceplants into wonder woman’s boobs. like, there are a handful of movie moments, often big reveals or twists, that have had me sitting in the theater feeling like the world flipped on its axis they change my perspective on the movie so much and this was like. the evil version of that. made worse by the fact that i was with my mom, but she didn’t remember the same scene happening in age of ultron, so i fully felt like i was losing it

#justice league, #joss whedon, #anti joss whedon, #honestly the actual news has a similar bewildering effect, #its the kind of racism you feel like we havent left behind, #but we have gotten to the point where you wouldnt actually SAY IT with your VOICE, #but APPARENTLY NOT!, #rambling, #mine
6 notes · See All
Next Page