Just needed a healer and it works

Full clear with just w and reed the others didnt do much damage.

i really like eunectes and tomimi but i wanted to redesign their outfits so it’s a bit more comfortable. 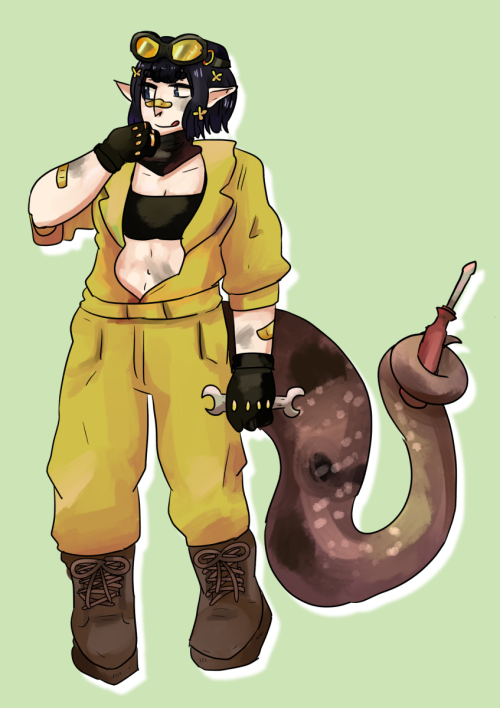 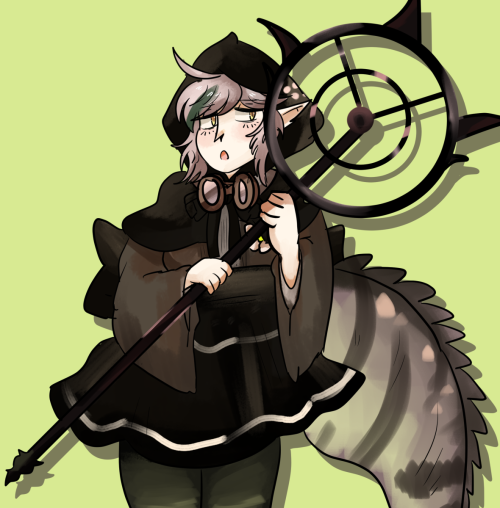 damn fungimist might be my favorite event now, i hope it becomes a regular event in the future like CC because its be the most fun ive had in arknights

me sees any character with horns and a somewhat dark outfit: arked nights???

Kal'tsit: i hope you enjoyed your little vacation and actually found some value in it you sociopathic freak

Doctor internally: i cant let her know i flirted with lancet-2 and let kay go on shroomed-up rampage

Also I love how The Great Chief Returns adds character to the doctor. We see exactly why the doctor is respected; because theyre a slimy genius. Someone who deconstructs a plan from behind the scenes so that it unravels right in front of their enemies eyes.

No wonder Kal'tsit is so wary/weary of the doctor. Someone like that would absolutely be capable of orchestrating an entire medical company and selling them out for personal gain

This means that Lancet-2 is also muscle-brained jock

As an avid consumer of Lore, both canon and theoretical, as well as a person who must have all the things, nothing drives me more nuts than the knowledge that most every artifact’s flavor text and random encounter in Fungi Mist has worldbuilding attached to them.

The reason this is an issue is because I am small-brain and can’t reliably finish a run. And the only reliable strategy I’ve seen so far is “Get Thorns, lol.” 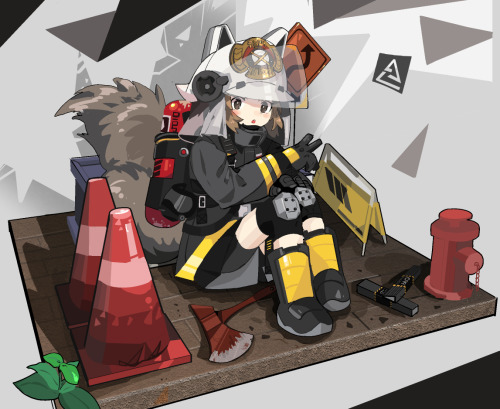 “So…This is kind of awkward, isn’t it?” Swire swished a glass of whiskey between her fingers. “I’ve never seen you drink this much before.”

“She’d usually try and stop me.” Hoshiguma signaled for another stack, and the bartender dutifully refilled the pyramid of shot glasses in front of her.

The Feline shrugged. “She’d also know how when you’re in this kind of mood, and honestly? Kinda want to see what happens when you get drunk.”

“And tonight’s as good a night as any.” The Oni groaned. “Did she have to cut through my Hanya on top of everything else? I won’t have them watching me while I sleep tonight because they’re getting fixed by Vulcan. This sucks.”

“It’s weird to think she was the life of the party in our group, but I guess her getting flustered at everything we did or said gave us something to build off of, huh?”

Hoshi nodded with a sigh. “Yeah…Honestly, though? That cleared one thing up pretty good for me.”

“Oh, really?” She finally downed the shot in her hand. “And what’d that be?”

“Well, for the longest time, I was kinda torn, but I didn’t see what was right in front of me: Ch’en’s entire life is about duty, what she has to do to meet her expectations and get others around her to do the same. You, though? You know how to have fun, take a break from all the bullshit and just let loose…Yeah, there wasn’t ever really a choice, was there?”

“It’s kinda lucky I didn’t make a move on her before now, honestly.” The Oni chuckled to herself. “Not like she would have said yes, anyway. She’s lonely, but she’d never admit that long enough to think about it. Still, that tail looked mighty strong for something that thin…”

“How long have you been thinking about this?”

She shrugged. “I’unno. A while. At least as long as I’ve known you, I think.”

“And you didn’t say something until now?!” The Feline smacked her glass on the bartop, and it shattered in her hand. “…Ow!”

“Why’re you so uppity right now? Come on, let’s go fix that up.” Hoshi left a few hundred LMD on the counter and sloshed off her barstool.

The money-cat nursed her wounded paw with her other hand. “I can feeeeel some of the glaaass got stuuuuck this suuuucks so muuuch.”

“You sing like a bird when you’re hurt. Here, let me see it.” She looked it over, holding Swire’s wrist for a moment before nodding to herself. “It’s all skin-deep. Nothing some medi-gel can’t stitch up.”

“That’s a relief. Um, Hoshi, are you going to give me my hand back?”

The Oni turned her eyes to the Feline’s, peering through them. “I’unno. You mind if I don’t?”

“…No?” It hadn’t taken that much thought, but the answer surprised her more than anyone else. “But it’d be nice if you’d just come out and ask for what you want. Normally you’re way more dir-”

“Wanna go back to your place, fix your little scrape up, and let me squeeze you like one of those stuffed bunny dolls Closure sells so many of? That direct enough for ya?” She felt a stray drop of liquor on the corner of her lip and licked it off.

“Good, now let’s-” The Feline wasn’t moving. “Look, the faster we get there, the faster your hand-”

“You have something on your face.” She hiccuped.

Hoshiguma considered just picking her up and taking her away like that, but it didn’t feel right somehow. Besides, she didn’t have a mirror; maybe there was something there. “Really?”

“I’ll get it.” And seemingly forgetting about the pain, the money-cat cupped the Oni’s face in her hands, stood on her toes, and tugged down to reduce the final distance between their lips to 0 for a moment. “…Heh. Now we can go back to my place~”

“Had to wait for the whiskey to hit your brain?” Now was the perfect time to sweep her off her feet, which Hoshi immediately did.

She shook her head. “No, it did that a whiiiiile ago. I just wantcha to know how I feel, even if I kinda don’t yet.”

“Gotcha.” The Oni let her eyes wander openly now that they had things settled. “Well, I read you loud and clear…”

The next morning, Swire noticed a few things in rapid succession: she hadn’t put on her pajamas last night, she’d fallen asleep on her couch - correction, on Hoshiguma, who was on her couch and also pajama-less - and from the little bit she remembered from last night…Apparently, this was going to be happening more than once.

Why was even just the thought of that enough to make her grin?

‘Y’know, I bet Ch’en would kill us for skipping out on work, but since she’s not here…’ The Feline talked herself into calling in sick as she stayed near-motionless except for the impossible-to-stop purring, her head comfortably sandwiched between two peaks while cradled in the Oni-Curve Valley. She felt like a puzzle piece that finally found where it fit.

“Hmm…Nope. Doctor said we’re s’posed to take some time and breathe.” Saying that, she squeezed her arms a little tighter around her couchmate.

“Tomorrow?” Hoshiguma sighed. “Maybe you’re more like her than I-”

“Only so I can spend more time with you. This is sooo nice, I don’t want the wonder to fade so quick, you know?”

The Oni thought for a moment before sliding Swire closer to her face. “C’mere for a second.”

“A lot more than I thought I did. For right now, though? I don’t want to think about tomorrow, or work, or Ch’en, or Lungmen, or anything, except you and me. Is that reasonable?”

The Feline giggled. “You’re asking the wrong girl about that, Hoshi.”

“Am I, now?” Smooch. Hoshi was already coming to like that option. “Then you don’t mind my being a little unreasonable for now? While we still have today?”

“While we still have today?…We might as well enjoy it to the fullest.” And so saying, Swire settled her head between the couch and the Oni’s neck, promising herself to do just that.

Lancet-2 being a cursed bot

The ONLY 2 complete runs I could do on the EASY mode. Both were thanks to Walmart Faust and defenderknights/ sniperknights coming through for me.

Also I never thought they’d put a limited banner op available for temporary recruitment. I mean I already have Nian, but this is a nice surprise

#arknights#other 6* temps were phantom and suzuran; neither made it through to the end tho#fungimist
1 notes
sonodaten
Text

blitz was my main in r6s so i’m hyped that he’s gonna be in arknights, and i’m glad they did a good job of making his skills and talents faithful to his original gameplay 🙏

Okay, so, like, we know Gavial is incredibly strong, to the point of overpowering Eunectes if she’s not using Big Ugly.

In the scenario of a class change Gavial who stop healing and fight, she thus need to have higher base stats than Eunectes with her S1. At least in the attack department.

Thus, if we have a “guard” gavial, she need to have an attack at max level of at least 1 346. Obviously this isn’t exact, because maybe her archetype will have higher attack speed and all that, or strong skills.