My new obsession is hector bellerin

Or you could see this as a list of the amount of times referees have obviously got it wrong in the first place and had to change the decision.

she cute or whateva

Warning! Author’s vision. Make for fun, Does not pretend to anything serious

Please reply or comment, who i should took on Ravenclaw?

What if… What if Jason and Cassandra (Savage) both escape the Light, the Shadows etc and the crime scene in general to ultimately switch side together? Like, imagine after that having a Red Hood and the Outlaws story arc in later seasons (I’m saying that bcoz season 4 is already set to be LOSH centric so…) w Cassandra being an Outlaw and possibly… Arsenal with them? I would honestly die ngl

All I ask for, all I ask for, is for one Batfam or Jayroy fic that doesn’t demonize Oliver. It’s all I’m asking for please, just one fic! Oliver loves his kids, he loves Roy so so much and Roy loves him back and I wish batfam fandom would stop characterizing Oliver and Roy’s relationship based on one comic arc. They love each other and Roy forgave Oliver a long time ago in the comic canon and they moved past all that onto a better relationship! Just because you aren’t a Green Arrow fan and don’t read those comics doesn’t mean you have to base their relationship and other character’s opinions off of the one arc you know!

I’ve said it once and I’ll say it again Oliver Queen loves his kids which means he loves Roy Harper, and Roy Harper loves Oliver Queen as his father.

Oliver and Roy don’t hate each other and they never did! They fought, and Oliver did a shity thing, but they always loved each other!

Oliver Queen is not the evil man a lot of the batfam fandom make him out to be, and making him look bad does not make Bruce look good because Bruce has done much worse things to his kids that he never apologized for where the majority of the time Oliver apologizes when he messes up! Please, for the sake of my sanity, just let Oliver be a good person in Batfam and Jayroy fics, the dynamic of Roy hating Oliver and Oliver being a bad dad isn’t entertaining done this many times.

i love these idiots

#they really did that, #afc, #arsenal, #arsenal fc, #the champions, #br football
7 notes · See All
givebeastboyamulletText

aka the teen titans gc that no one, especially not robin, asked for.

Was anyone going to tell me Lewis’s favourite football club is Arsenal or was I supposed to find out about this life-changing fact myself??

#i was dragging him for being a barca fan when he’s also a gunner???, #it immediately cancels out, #this means we share the same pain and suffering nearly every weekend wow ❤️, #this is the best day of my life, #arsenal, #lewis hamilton
7 notes · See All
pluckyredheadLink
Some Cupid Kills with Arrows - Chapter 3 - poisonivory - DCU (Comics) [Archive of Our Own]https://archiveofourown.org/works/27479695/chapters/67763666

“Now, Emi, what did I say about bringing supervillains home?” a voice drawled. Jason looked up to see Oliver Queen standing in the doorway, arms folded. “The kid and the girl’re okay. The other two riffraff can vamoose.”

“Ol-lie,” Emiko said, rolling her eyes as she got to her knees. She pushed past him, pausing to let him throw an arm around her shoulders and smooch the top of her head. “Come on, everyone, he’s just talking because he likes the sound of his own voice.”

“It’s a reason, but it’s not the only reason,” Ollie protested, but he didn’t object when Jade and Jason filed into the house after Cass and Damian, the latter with his hand still on George’s collar. He did, however, stop Jason in the vestibule with a hand on his shoulder. “Todd.”

God, he hated this man. He hated his self-righteousness, his hypocrisy, his conviction that being the loudest voice in the room meant that he was right. He hated his stupid beard.

Most of all, he hated the way Roy had seemed to grow smaller, sometimes, when he talked about Ollie. Like he was still seeing himself as a boy who had failed his father, when anyone with eyes could see that it was Ollie who had failed his son. Like there was something he was still trying to earn from the man, something that should have been given to him unconditionally.

Chapter Three! It is…indulgently full of Arrows. I love thems.

Roy, pointing at his own head: No thoughts just gay.

Jason: That’s not having eclectic tastes, Grayson. That’s having no taste at all.

Roy: Trust me, you’ll get used to it. He’s been roasting me for years.

tim, jason and roy describing themselves. 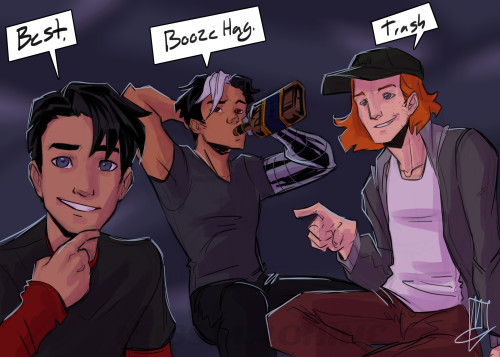 any ship with jason  in it is great because he canonically went to heaven when he died which means that you know whoever he’s dating is the one who went to super hell for being gay. jayroy is great in particular because it means that wally sent one of his childhood best friends to super hell :)