Me, who believed the theme of Kristoff’s past would finally be faced in Frozen 2:

Frozen 2 is on Disney+ so you know what that means!

Time to rewatch it a million times and overblow every single new tiny detail you see :D

Im having a bad case of writers block on on this mini fic about elsa dealing with unwanted feelings for kristoff & in the end she does the right thing bc she cant hurt Anma or Kristoff, its just there is so man ways this story can gooo, 😭😭!!

Even sadder thought: The average lifespan of a reindeer is 12-15 years and Sven is already at least 16 (he appeared in the prologue when Anna was 5, and Anna is now 21) so he probably doesn’t have that long left.

Also sad: Whenever Sven does die, Olaf will have to come to terms with a permanent death that doesn’t get reversed.

“You look different. Did you cut your hair or something?”

Found this video on one of my kristanna mv sprees and i Love it ! It definetly deserves more credit and attention for this talented animator 💗💗💗

So I decided to draw a humanoid Sven as a warm up and it actually came out really cute?? I was not expecting that, but I love him and I’ll protect him with my life

Elsa: Everyone I’ve ever loved is here within these walls

#frozen 2, #into the unknown, #elsa, #anna and kristoff, #kristoff and sven, #olaf the snowman
204 notes · See All
animebwText

So, Frozen 2 is really damn great. A truly epic sequel that expands and evolves the scope of what the franchise is capable of, with one of the most mature stories in recent Disney history. Seriously, I was not ready for how complex and intimate this movie’s themes and overall message ended up being, and it leads to a final act that utterly blew me away. Not quite as airtight as the first one and definitely could’ve used a few more minutes in the second act to flesh everything out, but it’s a knockout triumph all the same, and I’m gonna be singing one particular song for a very long time. 9/10, don’t miss it. 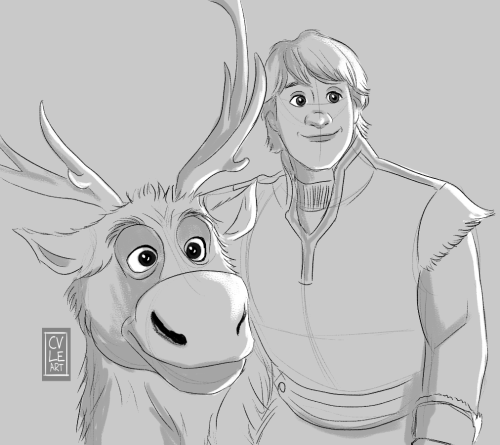 I think Kristoff is Northuldran

I saw Frozen 2 💙💙💙💙. In love with Anna and Kristoff and all the baby reindeer. Also bruni is just so cute. ❄❄❄❄🌨☃️ Olaf just gets better

I really wish someone loves me the way Anna loves Elsa.

#frozen, #frozen 2, #anna and elsa, #anna and kristoff, #kristoff and sven, #olaf and anna, #my love for this man knows no bounds, #my live is everlasting, #i really love it, #i really do
41 notes · See All
chloeomeliaText

Kristoff is the best Disney Prince.

whenever I have been asked about my favourite disney princes, I have always said it was Eugene from Tangled…the typical “bad boy image”. I mean,men have always been portrayed as Manly,powerful, natural leaders right?

But come on guys- We are in 2019. Things are changing! Contemporary society is ALOT different with mental health being a particular struggle for both MEN AND WOMEN. Stereotypes aee changing! Girls can be powerful and influential!….

…..and men can be vulnerable and insecure.

THIS IS WHY I LOVE KRISTOFF.

The release of Frozen 2, I forgot how much I ADORE Kristoff as a character. I missed him. He is such a goofball,living life with his best friend Sven.

The character arc in the new movie shows how Disney are making relevant content, appealing to EVERYONE. Kristoff is struggling to find himself and express how he feels throughout the whole movie…surrounded by very powerful women (one LITERALLY being able to kill him instantly) on a journey ‘Into the Unknown’.

Kristoff (Potrayed by Jonathan Groff - a true icon) was FINALLY given the opportunity to sing in Frozen 2 with a song called Lost In The Woods- a song dedicated to Kristoff struggling with his emotions! A powerful 80s Ballad showing how this MALE character is feeling VULNERABLE- something not shown in movies often as well as having masculine traits (Kristoff is a hard worker with a physically demanding job).

In summary…..Disney is destroying the stereotype and I live for it!👏

I LOVE THIS CAST MORE THAN ANYTHING RIGHT NOW

I’ve just been to see Frozen 2 at 16 years old and I felt like a little kid again. It is honestly beautiful, Kristoff is hot, Anna and Elsa have bomb outfits and the songs are fricking tunes ✌