This is me last year, keep praying for the reveal soon please hoes mad here

Summary: In one universe, after Shirakumo’s death, he is made into a Nomu, is given a new name - Kurogiri - and a new quirk, and becomes the right-hand man of Shigaraki Tomura.

In this universe, Shirakumo, still alive, manages to escape from where he’s being held at, and goes looking for his old friend, giving one Aizawa Shouta a heart attack and the biggest mind-fuck of his life.

“Us, the main attraction of this sinister carnival,” Keigo says, extending his wings to their full size, intimidating. “The tamed demons.”

Happy Halloween!! For @chicken-tendies-and-bacon-bits Halloween bang 2020 I had the most amazing time working with TheyCallMeBol with the theme: Carnival. Check out the fic! The story is sooo whimsical and wicked to the point I whipped up three pieces!!

Link to the fic will soon to come :) 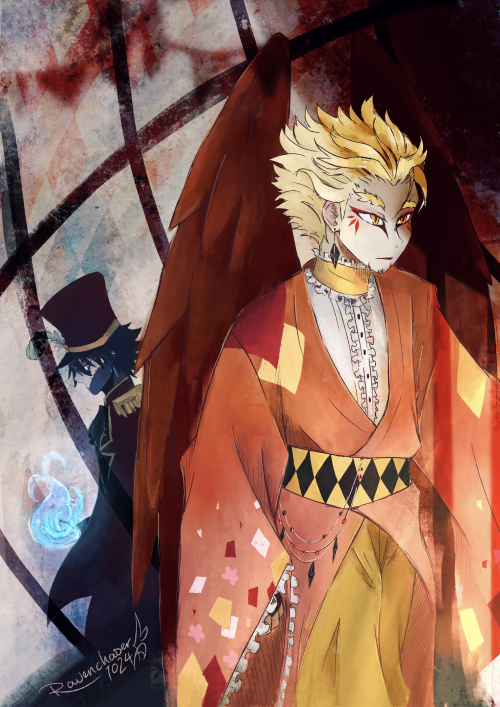 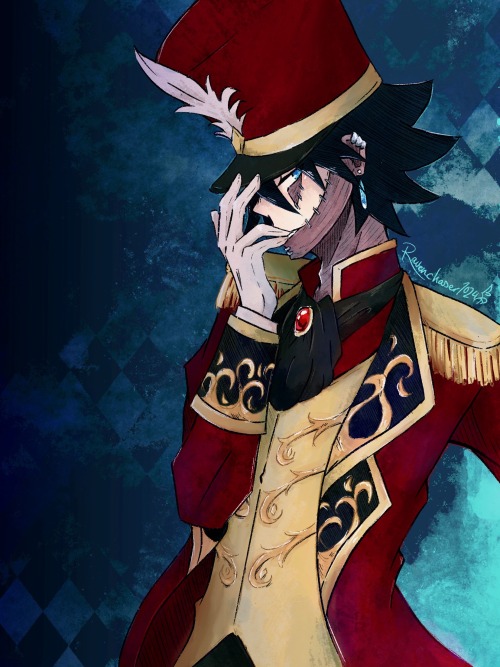 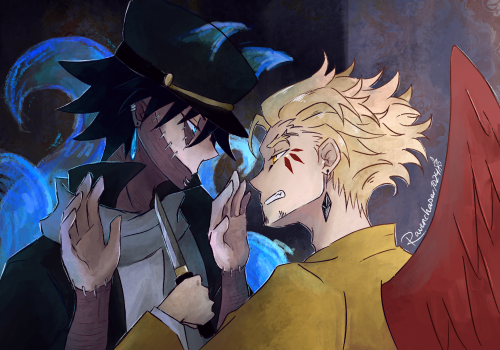 Something’s In The Dark

Summary: Izuku watched as Uraraka forced a swallow, her attention rapidly going back out to the stretched shadows that the buildings cast. Searching.

Everyone was on edge, they all had been for a while.

Since the screaming elsewhere in the Training Grounds had died off to an all too sudden halt and icy fingers of confusion and dread picked its way down their necks.

This was an activity, they were being observed by their teachers, if something had gone wrong then it would have ended abruptly.

It didn’t stop the fear.

It didn’t remove the feeling that there was something lurking just out of sight.

Halloween wasn’t a large event at UA. Nothing compared to the Cultural Festival, but not being able to head home due to the threat of villains wasn’t going to stop Class 1-A from celebrating properly. If celebrating meant walking around a darkened street in the dead of night, breath fogging and hair standing on end.

Mei will do anything and everything to promote her “babies”! We all love a persuasive and innovative inventor🛠

She speaks! And the first thing she says is some raw sense. Ya’ll, you have no idea how much I adore Kendou.

Okay, I mean, I thought Todoroki was smart before. Like, it’s multiple chapters out of him before we get any dialogue that’s something other than him analyzing battle intelligently. But now I get why genius girl Yaoyorozu thinks he’s so smart. Even here, while she’s still at full confidence (last time we’re seeing our best girl like this…), she’s basically under Todoroki’s command and he’s killing it. He’s utilizing everyone’s quirks brilliantly. And then Aizawa says the rest perfectly—which I’m sure Yaoyorozu is able to put together as well.

I feel like in any universe like this with powers, there’s always someone/something with the ability to copy. It’s too cool a power not to use! Like Ditto in Pokemon. Or I think about Strange the Dreamer by Laini Taylor a lot, which has a similar character. This quirk alone is enough for me to be much more intrigued by Monoma.

Although, this might be the weakest version of it, haha.

Lol has this already been done 🤣🤣🤣🤣

#that strategist in support, #this took me like 30 mins, #i laughed the whole time, #this meme, #love it, #you didnt connect shit shitiraki, #bnha, #boku no hero academia, #my hero, #AnitaArainai, #i couldnt find her tumblr lol, #thatstrategistinsupport, #such a good fic, #how do you tag, #funny, #i did a funny
3 notes · See All
konstituniaText

Summary: You’re a full-fledged cold-blooded villain, but Dabi suspects otherwise. And he knows just the way to get you to prove your loyalty…and your faith.

Notes: Was supposed to just be a smutty angsty drabble to release some anger from the day. Oh well. Enjoy my rage~

You’d been a part of the League of Villains for the past 5 months now. It was a gradual process for your mind to go from being the ambitious, good-natured upcoming pro-hero, to a cold-hearted deviant that seemed to show no one an ounce of mercy.

And why should they deserve your mercy? It was their fault that you became who you were now.

You’d been kidnapped and kept as a ransom by the league, constantly tortured in hopes that the monetary demands would be filled. Their torture techniques becoming more sinister by the day.

But you put up with it, because you knew the light at the end of the tunnel was closer than it seemed.

Besides, it wasn’t even a lot of money. A measly $2.3 million dollars. Any rich pig could’ve came up with that to rescue such an admirable hero.

Waiting for someone to answer the ransom to let you free, until one day Dabi came into the cell you were in, holding his phone. A dubious grin on his face, possibly signaling they had got the ransom they hoped for.

“Good news, little kitty. Would you like to hear it?”

Doesn’t have to be just IE-

[11:27PM] izuku dresses up as all might for halloween! bakugo calls him a nerd, but secretly wishes he thought of the same thing. even if he’s twinning costumes with kirishima.

Would you give him candy?

I just wanted to try some spooky colors and used a festive egirl style with my birdboi.

Ngl I kind of dig the neon freckles.

If hawks’ past ever gets out to the public i dont want a big emotional breakdown from him (at first), i just want him to find an article about it on twitter and to reply “bruh :/“

May they just chill out with cotton candy again…

•He isn’t really the type to approach people, so he just admires you from afar

•The two of you met when you sat at the same table in the cafeteria, and you and your friends asked his opinion on something

•First he is confused, then he is annoyed

•Because why the hell is he feeling this way? And why towards you?

•Sure, you’re attractive and seem to have a great sense of humor, but whyyyyy

•Bakugou doesn’t act on it at first, but when he feels like it’s getting really annoying and he can’t get you out of his head, he sits next to you in the cafeteria and kinda tries to chat with you

•It’s a pretty bad attempt at getting to know you, but you find it funny and humor him