TO FIND A FIC

hey guys! So I was remembering a fic a read a while ago, it goes like this: Adora and Catra are marry and live in a house in the whispering woods, so one day Adora goes to a mission in space, there is an accident and then they lost track of her ship, years past and Catra was pretty sad about it cuz everyone thought that Adora die but she tries to move on, til one day Adora returns but she doesn’t remember everything that happen with saving Catra or the heart, her last memory is Catra activating the portal

Can someone help me pls? It was in AO3

note: I finished spop today and oh my goddd………bro…… I think I’ll actually finish this at some point maybe since I actually like it so that might happen, esp if u guys like this?

In the Gay Dip shot, we can clearly see Catra’s blue eye. Going with the theory that her yellow eye is shown when she is being malicious and blue when she is not, one can infer that the Horde’s plan is in the back of her mind and at this moment she is actually enjoying herself and being with Adora. For the majority of the scene both her eyes are showing, hence her talking about The Plan, but in the dip her blue eye holds the majority. In this essay I will

Burned a life to save Glimmer.

*This chapter gets graphic please be warned!*

First off: I am participating in Fandom Trumps Hate! It’s a charity auction in which you can pledge to donate money to a cause (more info on the page) and in return get the gift of She-Ra fanfiction tailor made to your specs. Or, well, She-Ra fanfiction if you bid on me (which you can do here), but I’d encourage folks to also take a look at the offerings site here for a whole trove of fantastic writers, artists, podficcers (including @lionteacher, who rocks!), betas, and more for a TON of different fandoms. Bidding closes in about 24 hours at 8pm EST 2/26/21 (yes, I did plan to make this post earlier. That…did not happen. I’ll delete this section of this post once bidding closes).

New (relatively speaking) from the land of She-Ra:

Other things! Entirely because I up and did the chocobox fic exchange:

I continue to have a whole lot of spop/catradora drafts because I have no self control, my faves being:

As a reference note, my writing tag on my tumblr is still #forsythiarising, because it me and also it sufficiently specific

Does She-ra have official merch?

I’m gonna watch this show tomorrow and if I’m right it’s a Netflix original and I was wondering..where is it’s official merch if it has any, I’ve seen PLENTY of awesome fanmade merch but does it have anything official? It’s not Netflix is weird with their shows as Stranger Things has TONNNS of merch, official and not.

I was just thinking about like She-ra Funk Pop figures or like action figures you see from anime or whatever and I’m like “Is that a thing? I want that to be a thing.” Like did the shows creater/team not want merch done? Was it Netflix’s issue? I don’t know I was just thinking about it. Like imagine like a scene figure or something of Catra and Adora’s kiss 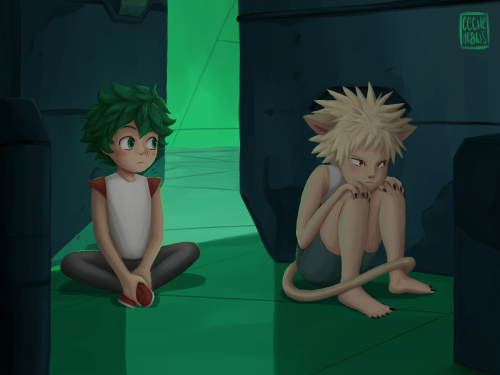 2. What is your favorite snippet of dialogue?

Hmm well I dunno that I can pick a greatest of all time but in terms of recent stuff I can remember easily I really like this snippet from Hail Mary chapter 8. It came to mind partly because I’m working on another scene of Catra and Lonnie bickering lol. But this piece of dialogue wasn’t planned and kinda came out of nowhere as I was writing… I find a lot of my best exchanges are ones that happen organically because the characters have plans of their own, forcing me to take a detour.

I love this whole bit, but especially the beat at the end where the argument kinda has a fakeout ending before Lonnie says her next line. The comedic timing is strong on this one. And I like Adora’s little bit of narration after that, partly because I agree with her but mostly because it’s honest and earnest and just so very Adora.

“As if you don’t like it,” Adora teases her as she turns back around.

“I’m seriously gonna puke, you two,” Lonnie remarks over her shoulder, and Adora catches a quick glimpse of her muscled back before remembering to look away, her cheeks dusting red once again.

“If you don’t like it, the couch is always an option,” Catra snipes across the room.

“Yeah, you’d like that, wouldn’t you? Room all to yourselves.”

“It would be great,” Catra says flatly. “No more loudmouth getting up in my grill.”

Lonnie snickers, turning around as she finishes pulling her shirt on. “You liked it when I was up in-”

Unfortunately they don’t take the hint and Adora’s hands aren’t enough to block out the frankly disturbing argument.

“So did you, Lonnie,” retorts Catra. “Don’t go pretending you’re some stone top.” Rolling her eyes back in her head, she moans, “‘Oh, harder Catra!’”

“Oh my god, stop!” shouts Adora, one arm looping around Catra’s chest to hold her back. Taking a turn to glare at each of them, she demands, “Does everything have to be a pissing contest with you two?”

“Yes!” they answer in unison before turning to glare at each other once again.

“Okay, well I’m officially calling this a draw,” declares Adora. “Sit down and shut up, both of you.”

Maybe in normal circumstances Catra would snap back at her, tell her not to boss her around, but she seems to understand she’s crossed a line. They both do. The tension slowly leaves Lonnie’s jaw and she eventually shuffles back to her side of the room, clearly embarrassed. Adora meanwhile resumes massaging Catra’s neck, harder than she needs to or could possibly be comfortable. Catra grimaces but doesn’t complain, accepting the punishment with dignity.

Turning around mid-retreat, Lonnie adds, “For the record, I’m not a pillow princess.”

That just makes Adora roll her eyes. This obsession with labels that don’t even make sense for cis-women is beyond her. What even is a top? Don’t girls usually both touch each other? It makes sense that you would. Adora doesn’t think it would be much fun to only do one or the other. In fact, she very much harbors a fantasy of both at once, lying next to Catra with sweaty foreheads pressed together, gasping into each other’s mouths…

Uh, anyway, Adora thinks it would be a shame not to do something fun because people care so much about some dumb labels that make no sense. She hopes Catra would let her touch her and not be weird and defensive about it. Not that she’s ever going to touch Catra but like, if she did. If they did.

A frustrated sigh expels itself from her lungs as she drags a hand down her face. “Thank you for that incredibly useful clarification, Lonnie,” she says flatly. “I really needed to know that.” 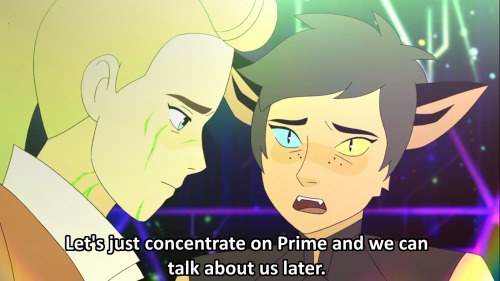 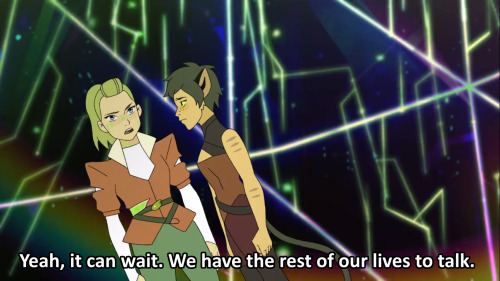 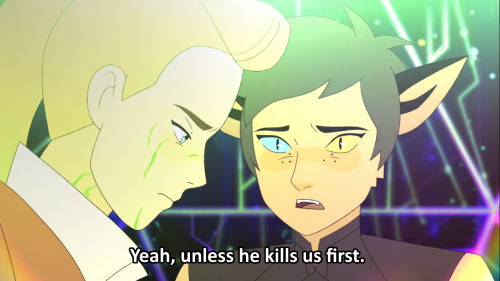 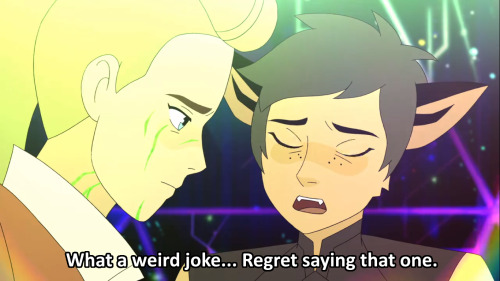