Parallels between 3zun and xxc, song lan and xue yang:

- virtuous xiao xingchen and lan xichen are blind to others’ faults 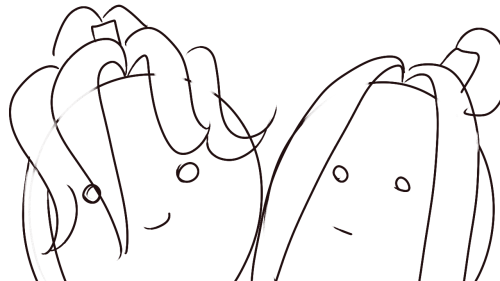 Wei Ying wants to rob him, but it wouldn’t even be satisfying, since this guy is just—giving away money. With his nice fingers. Maybe Wei Ying will just bite his fingers, and that will give the same endorphin rush as robbing him. / a day told across five parts. 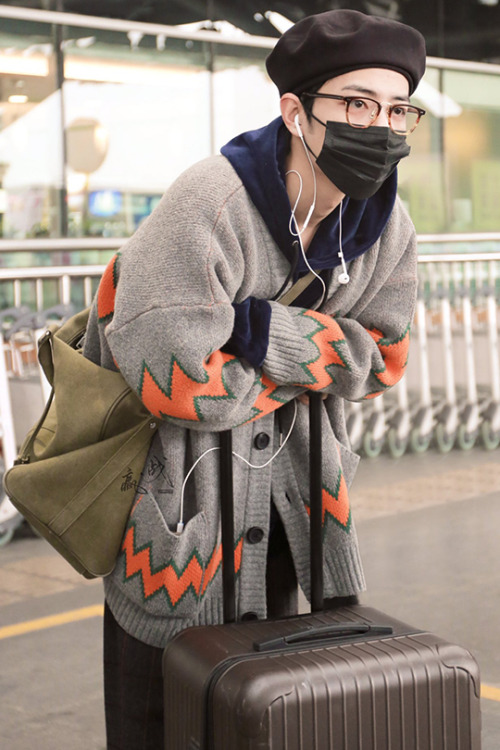 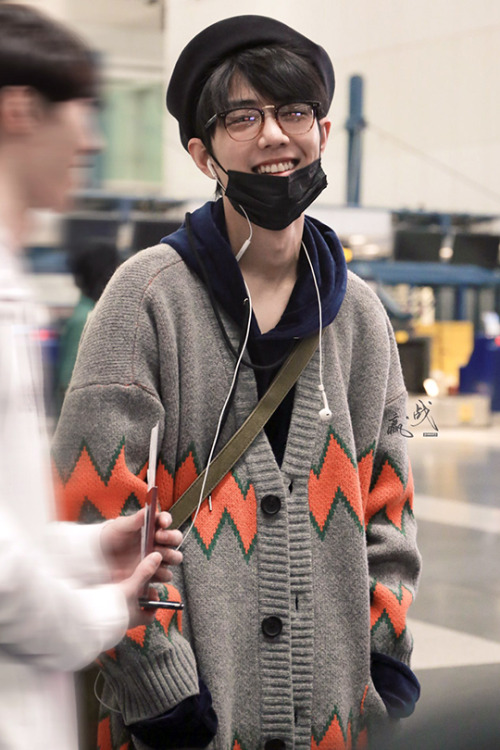 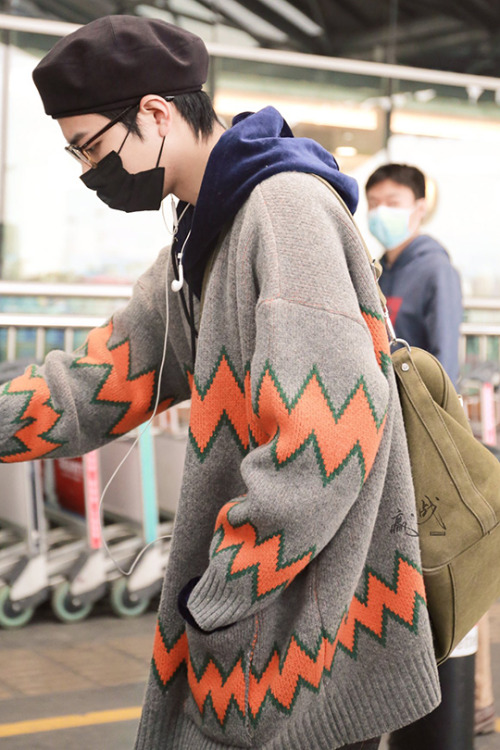 (Or Lan Wangji having his life turned upside down)

Lan Wangji and Meng Yao both stare after Xiao Xingchen and Song Lan with the same wistful expression and I don’t know what to do with this information.

how I imagine things would go if WWX, JC & the juniors tried baking together 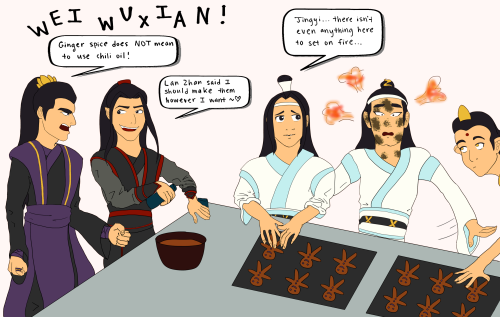 Thinking ‘bout how baby Lan Wangji probably idolised the righteous Chifeng-zun. Have you seen his face in episode 10??

^^^^^ so starstruck by Xiao Xingchen and Song Lan that wwx has to prompt him with a subtle, “We going or what?”

And then, staring at the imposing fortress of the Yet Clean Realm:

Lan Wangji is a NMJ stan, change my mind.

I realized a few weeks ago that I made my first posts in this fandom, both on tumblr and on AO3, in November last year. Happy anniversary fic! Many thanks to @morphia-writes for the title suggestion.

Read it on AO3 or below the cut!

One year after leaving Gusu, Wei Wuxian meets Lan Wangji at an inn on the border between Yunmeng and Yiling.

It’s not their first meeting—there have been a few night hunts when Lan Wangji happened to be nearby, a few arguably chance encounters when Lan Wangji arrived somewhere Wei Wuxian had just not quite left, in the days before some all-important meeting between the Chief Cultivator and a local sect leader. Perhaps two handfuls of moments, all together, as the spring passed into summer, and summer to autumn, autumn to winter and winter back to spring again.

Lan Wangji has reserved a room, and ordered food—local flavors to Wei Wuxian’s taste, steaming in the cool night and red with chilies—and has produced two bottles of wine and brewed what Wei Wuxian is certain is the best tea the Lan Sect buys, which is very good tea indeed.

“Lan Zhan,” he says as he finishes the meal, “You spoil me, really.”

Lan Wangji says nothing, but he looks so quietly, smugly pleased that Wei Wuxian laughs.

back on my songxiao bullshit 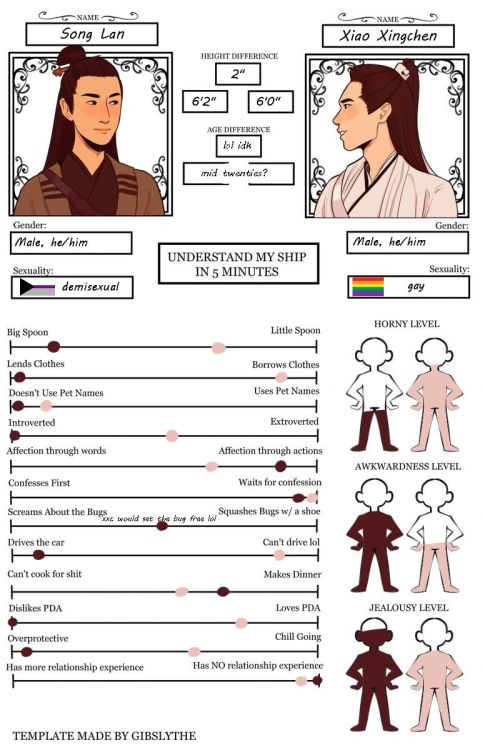 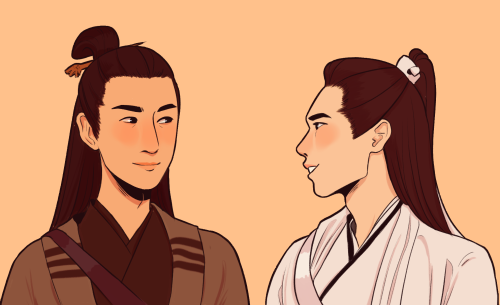 #songxiao, #song lan, #xiao xingchen, #the untamed, #mdzs, #this was supposed to take ten minutes and it took me. way longer because xxc was not coming out right, #AND I MEAN DRAWING WISE NOT GAY WISE, #also this is not exactly how i planned to introduce my demi song lan headcanon but, #here we are, #MORE DEMI REP!!, #understand my ship in 5 minutes, #cql, #chen qing ling, #mo dao zu shi, #xxc, #sl, #song lan/xiao xingchen, #song zichen, #song lan x xiao xingchen, #sl cql, #xxc cql, #songxiao cql, #yi city, #i am once again asking to just let them be happy
130 notes · See All
pastelcheckereddreamsText

This is what I made this blog for in the first place. 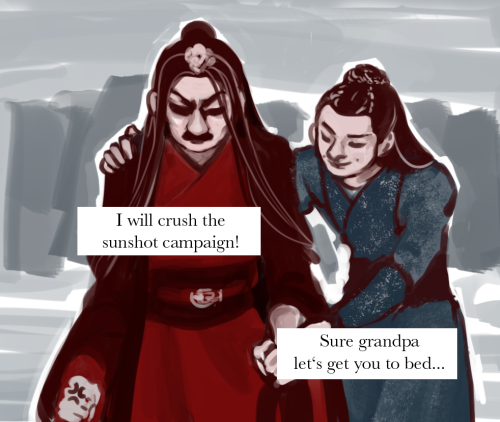 He is also quite possibly the love of Lan Wangji’s life.

Wangxian artwork i made sometime back, ah this took me more than 26 hrs, but till now its one of my most cherished artworks ❤️

Today’s contributor spotlight is on the lovely leddia, a wonderfully talented artist working on this zine.

the untamed, episode four; the first lecture at cloud recesses

“It’s the pain, and probably one of his bad days on top of it,” she tells him when he asks.

Wei Ying, he learns, often sequesters himself from the others, sometimes not leaving the cave for several days. He spends that time feverishly inventing cultivation tools.

“It’s distraction,” she says, sounding tired. “Whatever is going on in his mind, he’s trying to distract himself from it however he can—he’d probably numb himself with alcohol if we had it.”

Nightmares, Lan Wangji is certain, and the trauma of his experiences, perhaps his own lack of self-worth driving a need to be useful through his inventions.