what if sam had a black cat named marilyn

i’m working on a danny phantom reboot. here’s the boy himself. 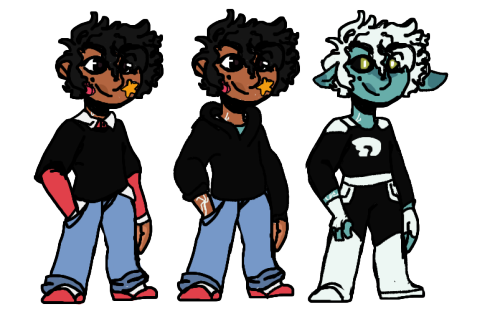 Danny phantom au where dream is Danny and Tommy is Danielle 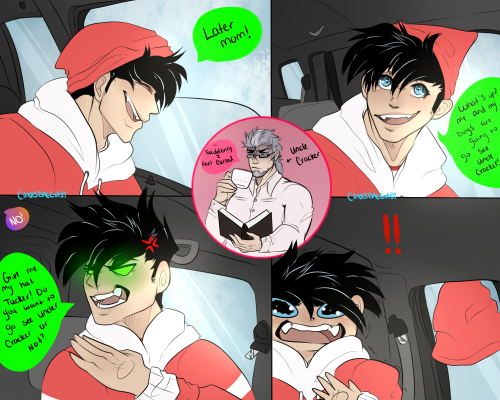 Sam: Danny, why aren’t you asleep yet?

Danny, looking up from his Nintendo 3DS: Sleep is just a social construct created by IKEA and Ashley’s Home Furniture to sell more beds.

“Yo, Fenturd, funny seeing you here.”

“Last time I checked, our entire class is supposed to be on this trail. I don’t know why you’re so surprised,” Danny quipped before he could stop himself.

Dash grabbed him by the front of his shirt. “What was that?”

“Could you deal with your beef with this loser later? I’m all sweaty and getting covered in dirt. My designer clothes will get ruined at this point,” the one girl, Paulina whined. The other girls in the group, her satellites, quickly tried to comfort her.

Something didn’t feel right. Winston never left the front door open or even unlocked when he was home let alone when he was out. Danny, hesitantly followed by his two friends, cautiously entered the house hoping nothing was wrong.

He peaked into the study where he had last seen his guardian, and although it still looked like a tornado had gone through it, no one was there. That, combined with the fact that the car was missing, told him that Winston had left the house in a hurry. It was possible that he had just gone to the meeting and locking the door slipped his mind, but he had never known Winston to ever do that; he was too cautious.

I also wanted to draw a blue boy :)

Warning- There will be a lemon here and a little bit of fluff.

My face is blushing madly as Phantom was flirting with me again for the fifth time this week.

“Phantom, why can’t you get the hint that I’m not worthy of your time?” I asked him, blushing more after he was done with one of his flirtatious puns.

“Because A, I’m not into girls, and B, I like you since you were the only one that captured my eyes~,” He said, holding a rose in his hand.

My blush grew worse, and I wanted to get out of here as soon as possible.

“But, why me, though? Why not with your fangirl/ fanboys?”

My legs didn’t want to move, much to my disapproval, and Phantom just smiled proudly at what he just did.

Then, he pulled me up close to him and said, “You will always be mine, Danny Fenton~.”

My face turned into a bright, red tomato as Phantom gave me a peck on the lips.

After that, he left me alone with the rose in my hand.

My mind was racing with thoughts of what just happened until the school bell rang, causing me to yell, “Shit!” and running up to my next class.

My face was in excitement as school was finally over!

Plus, it’s a Friday, and with no homework and not being bullied by Dash really makes it a great impact for today.

Just then, I got a text from my mom that she and Dad are going to stay over on a trip for a few days with Uncle Vlad (Vlad is good in this story) while my sister is spending the day at her friend’s place.

I couldn’t help but jump up and down for the excitement of finally having the place to myself.

Just then, Phantom appeared right behind me and said, “Well, well, well, someone seems to be excited~.”

I blush at what he meant and said that my family isn’t at home since they’re doing something in their mind for the weekend.

“Well, then, how about we get to know each other since we hardly see each other at school~?” Phantom asked, making me blush more.

“You already know where I live Phantom. Besides, we know each other after school to do homework. Can’t I just have a break on this day?” I whined, making him pout at my response.

“But Daaaaany, I want to be with you now~!” He exclaimed, holding onto me very tightly.

“No offense, but you sound like a five-year-old,” I replied, clearly wanting to run as quick as I could to get away from him.

“You love me too much~,” He said, making my blush return.

“Fine, you can come,” I said, sighing as I admit defeat.

Phantom was super happy, and I couldn’t help but find it cute.

My face grew back into a tomato as we, well, he, ran to my house as fast as he could.

Finally, we were here, but Phantom didn’t want to let me go, much to my dislike.

"You know you can put me down, right?” I said, not admitting that I didn’t want to be let go.

“I know, but you’re just too cute for me to be with~,” He said, placing me on the couch.

“Since you know what the house looks like, wanna play videogames?” I asked, slightly blushing.

He smiled after I handed him a videogame control, and soon, we were playing against/with each other.

It was fun, to say the least, and I didn’t have that much fun ever since I was young.

Sure my sister, Jazz, was with me, but she was too busy with her intelligence that she didn’t’ notice me at all.

I was about to win until Phantom pinned me to the ground, causing me to lose.

“Phantom!” I said, laughing as he began tickling me.

“Never!” He said, still tickling until he heard me moan.

He stopped, and we looked into each other’s eyes with a huge blush on our faces.

“D-Do you want to eat something?” I asked, trying to avoid the awkwardness in the room.

He nodded quickly, getting off me with a still blush on his face.

“So… what kind of food you wanna eat?” He asked me.

I told him that I wanted a pepperoni pizza since it was Friday, and he ordered it by calling the pizza company.

“Don’t you wanna eat something?” I asked, still blushing a little a while back.

“I’ll have half of your pizza since we all know that you can’t eat it by yourself,” Phantom said, seeing my face of understanding.

I smiled at him, which caused him to turned away from me, and then, we heard the doorbell ranged.

“Pizza’s here~!” I said, feeling my mouth was watering as I smelled the delicious smell of pizza.

Phantom paid the guy with a tip, and soon enough, we began eating.

I loved eating it messily while Phantom was eating it nicely.

Once we were both full, I decided to drink some soda while getting Phantom some water since he asked for it.

We drank and relaxed on the couch side by side.

“Glad that I came~,” I heard Phantom saying, making me blush.

“I’m glad too, Phantom. It’s been a while since I actually act like a kid…” I said bluntly.

Phantom was a bit confused at what I was saying, but I shrugged it off, saying that it’s not easy for me, a shy, smart nerd, to socialize with other people, unlike Phantom, who is popular, strong, and smarter than me.

Phantom frowned at what I said and told me that I was not bad, that I was a good person with a kind heart.

My face grew more blush, and before I could say anything, Phantom suddenly kissed me.

I was startled, to say the least, but I felt myself falling in love with him as he continued to kiss me.

We slowly fell backward on the couch as I wrapped my arms around his neck while Phantom wrapping his arms around my waist.

we’re out of eggs 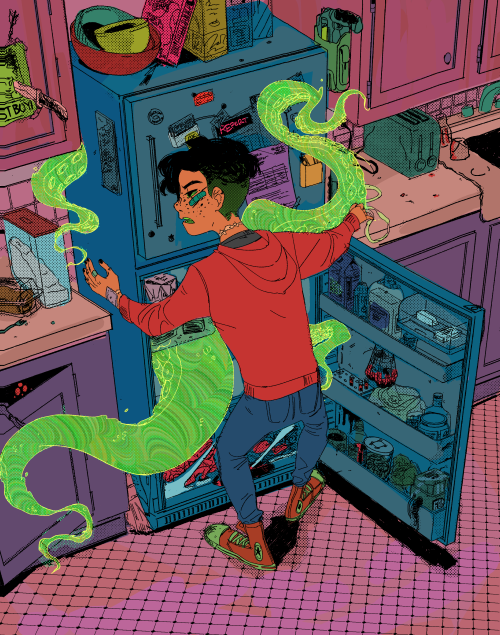 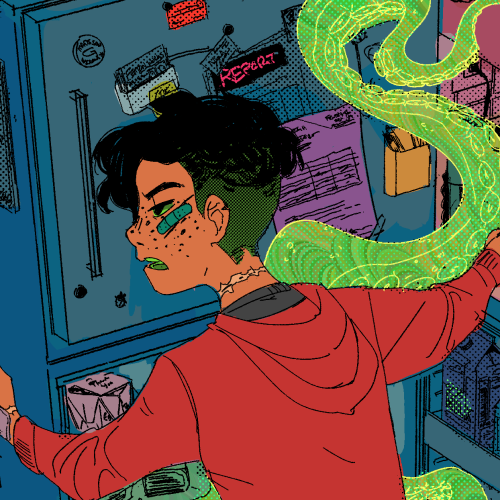 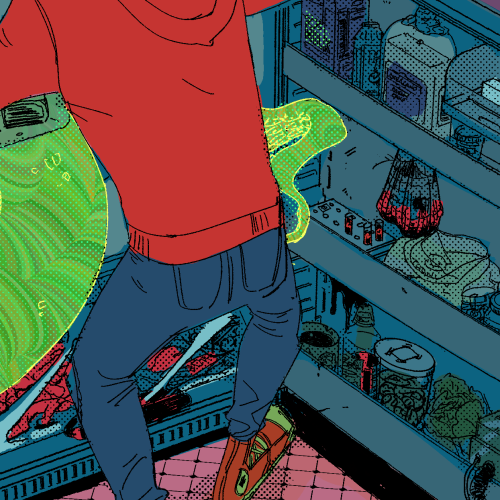 me imagining danny with fistfuls of lightning streaming down from the sky; making furniture rattle and fuses fizz; sitting plainly without blinking or breathing; baring sharp teeth and growling a noise that’s neither human nor animal at government agents; splitting open the ground and sieving up skeletons in his anger; screaming in anguish and every ghost in the vicinity screaming with him in sympathy; snarking off at cosmic beings who could pinch stars in their fingers; waking up cradled in their arms; finding warped, hollow, horrible creatures and loving them; sleeping in cemeteries; sitting with dead spirits who’ve lost everything but themselves; and caring about everything so much that the only thing he can bring himself to hate is the people who don’t care at all:

There is literally no point in this, it just popped into my head and I went into a frenzy