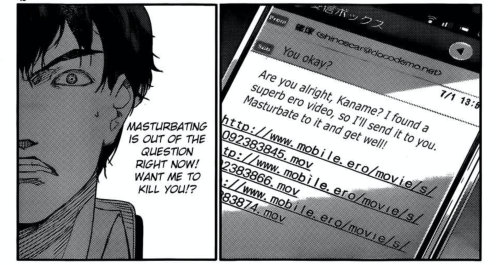 Another awesome competitive survival game. Think Battle Royale but in a fantasy world and with a talking snake in a mobile app.

High school student Kaname Sudou receives an invitation from a classmate to play Darwin’s Game, a mobile game he has never heard of. However, as soon as he opens the application, a green snake suddenly pops out from his phone screen and bites his neck, leaving him unconscious. Waking up in the infirmary without any signs of a snake bite, he is told by the school to take the rest of the day off. Although he is puzzled by what has happened, he dismisses the surreal experience as a hallucination and boards the train home. 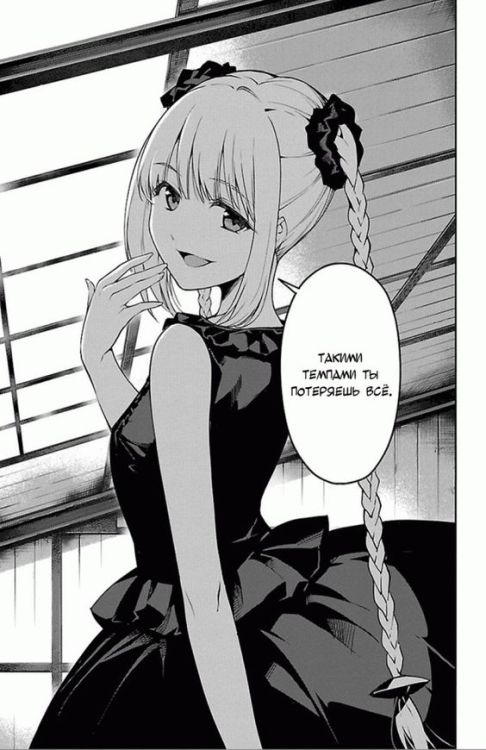 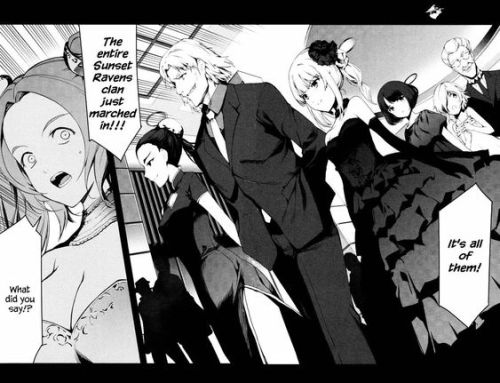 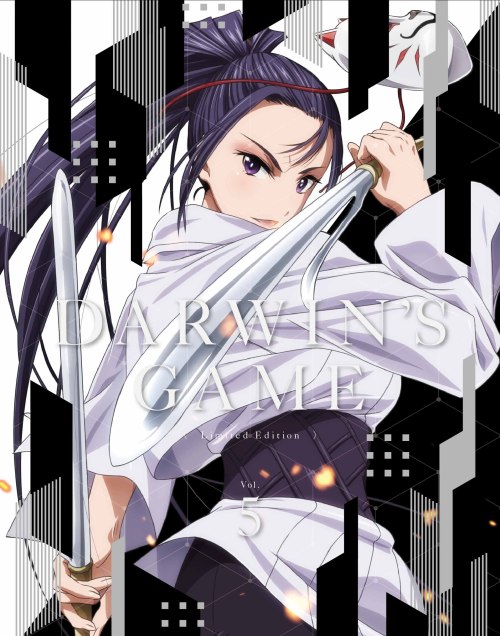 This is all kinds of messed up.

Can Kaname earn the support of the Danjo Boxing Club? 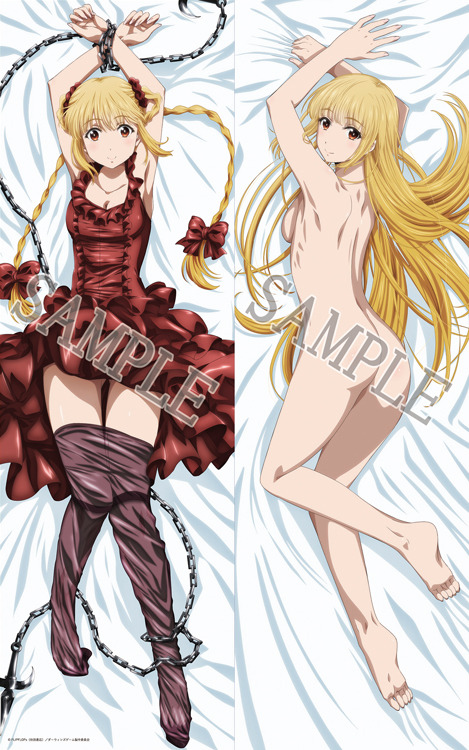 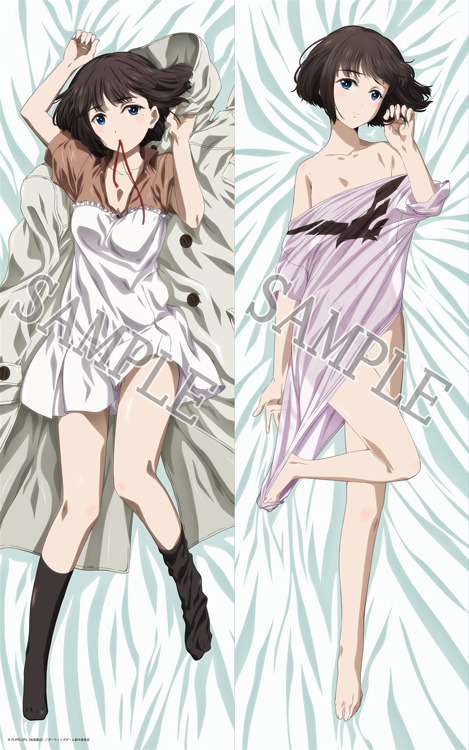 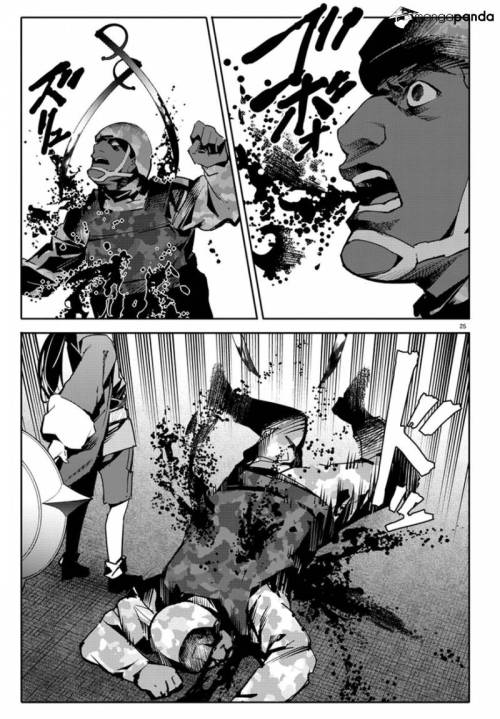 I finished Darwin’s Game ages ago, but I really don’t know what to say about it other than it’s just… garbage. Consistently subpar animation and just bad plain character art, and a plot and setting that literally makes no sense whatsoever and was carelessly thrown together by an author who doesn’t seem to give a shit, honestly.

What could have been a kind of interesting death game that takes place in public where you are constantly looking over your shoulder in every day life to just survive, instead pivots into a generic and completely non-sensical team VS team fight that may as well have been set on an island or in an alternate reality, seeing as it’s so far removed from reality and the public anyway.

And so Darwin’s Game peaked on episode 1, when our protagonist Kaname was just running for his life from a knife-brandishing man in a panda mascot outfit and survived by virtue of complete strangers unknowingly hitting him with their car. From this point onwards, there is no outside interference in matches… (save for a bunch of police in the finale that were pointless and get mowed own in 5 seconds by players???) because the all-powerful God app can make the citizens of an entire city go braindead and just leave so an item hunt event can take place for players. And this is just fine somehow and has no consequences worldwide. Uh huh.

A complete waste of an unusual set up out of the way, Darwin’s Game is otherwise just vapid and disengaging. Unrelatable and/or unlikable characters with wildly varying abilities that they use in the most boring, least strategic way possible running around playing an app that makes them kill people yet has no stakes, because the rules of the game and the world itself are vague and constantly change. Near the end of the series we meet a character that literally has supernatural abilities outside of those granted by the app! You know, because things just weren’t muddled enough.

No one but Kaname really has an arc, and his arc from pure survivalist to badass revolutionary that’s not afraid to pull the trigger is dissatisfying and unearned, and impressions of him aren’t helped by the fact that two of the strongest female players in the game want to marry him within an hour of meeting because he’s so cool and strong and can defeat them… because our death game anime should have a harem of defeated champions, so we super know he’s a badass. Uh huh.

There are so many instances of things that make no sense, even in context!, or awful character tropes that I don’t even know where to begin in criticizing it all… so in that sense, I would liken it to King’s Game. So much nonsense that it’s difficult to even comprehend, and yet so inane that it doesn’t even function as a “so bad it’s good” title. But for being a smidge less stupid, and at least more consistent, Darwin’s Game gets a 3/10. 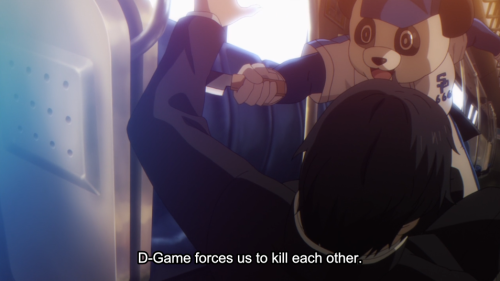 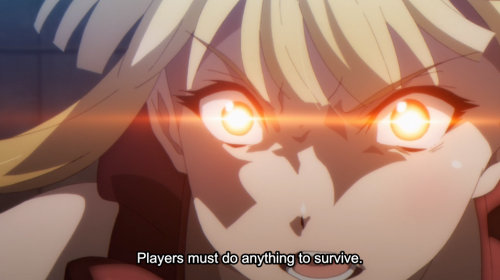 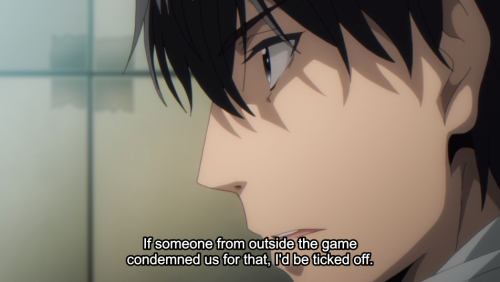 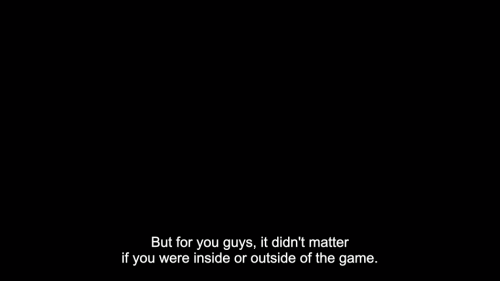 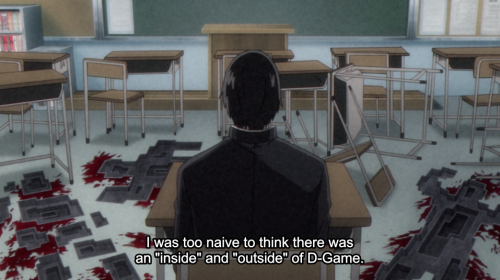 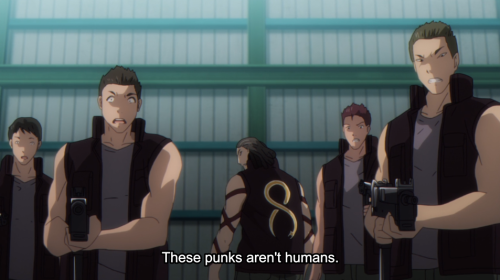 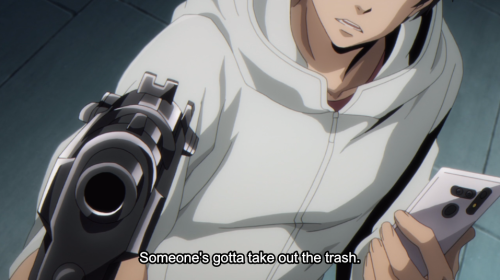 If you can’t write a motivation for your character you can just opt out of doing so… he can just be a henchman if it’s really that hard! 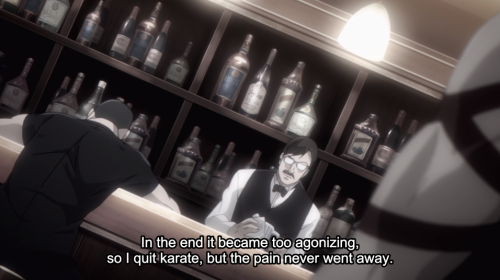 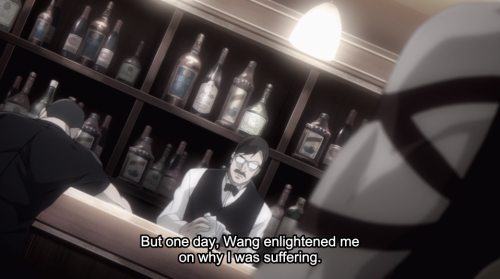 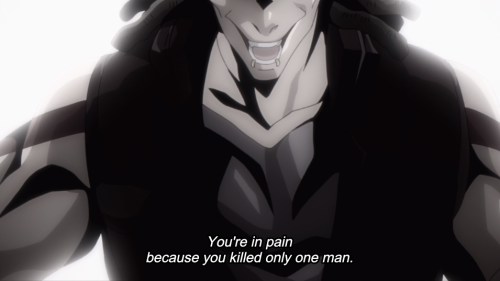 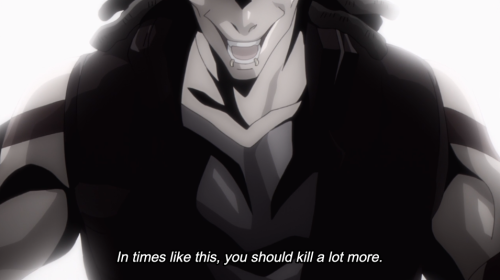 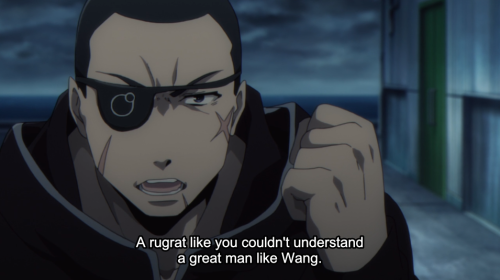 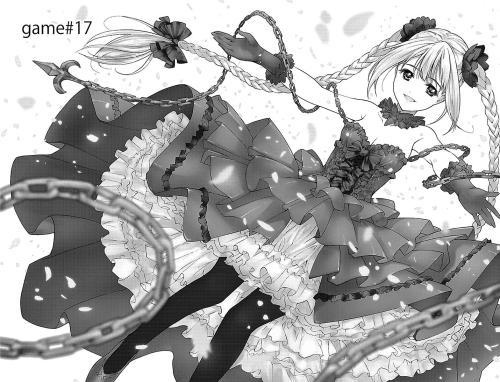 I was on the edge of my seat during episode 9 of Darwin’s Game. That car chase fight scene was excellent!!!

Shuka looks so good in black!!! 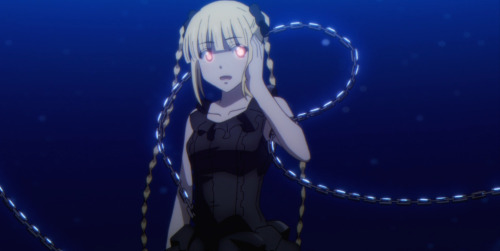 I’m not particularly attracted to the Found Family trope as I know others are, but I am loving this one for sure. Darwin’s Game is a very good show!!!