Jirou tried to hold it together for her partners. Turns out, she isn’t holding it together very well.

It was a bright day. The sky was mostly cloudless and the weather was warm. There was an uncommon amount of bird song in the air, as if spring had come that day and they needed everyone to know about it. It was one of many days that Kyoka wished she could turn her quirk off and have normal hearing.

It had been hard enough trying to sleep under normal circumstances when she could hear everything around her. It was torture having to hide her head beneath three pillows and one blanket trying to pretend that she couldn’t hear the restless tossing and turning happening in the other room or the pacing happening downstairs. To have the birds wake her up with loud chirping on top of that had been even more unpleasant.

She had been tired and on edge all week, but trying not to show it. No one needed her being moody, after all. No one needed to have her being disagreeable. Not now. So she’d kept to herself, kept silent, been sleeping in the guest room and staying out of the way as much as possible.

In fact, today would be the first time she’d spent more than ten minutes with her partners all week.

What did I say about crossing the road?
by MindIfImAWeirdo

Izuku didn’t like getting told off for doing something dangerous, but he couldn’t help having no sense of danger when his Quirk did all the protecting for him!

OR; Izuku has a Quirk that prevents anything from harming him. Things proceed to happen

For syber slash
by Silenthorse

There are stories about Saiyan Izuku being a hero. But what about a story that Izuku is a vigilante instead of a hero? Half-Saiyan AU. Vigilante AU. Lots and lots of Gore inside. Eventual IzuMomo. Family is told in flashbacks.

Sleight of Hand
by Mattagross

It wasn’t a particularly flashy Quirk, but it was effective in what it could do.

Being showy can go a long way.

Fear. It’s the one thing that can kill a hero regardless of how strong they are. If a hero freezes up out of fear, they could get someone—or themselves—killed. As the summer training camp’s Trial of Courage was so rudely interrupted, not everyone got the vital message.

No rules, short of murder.

Terrify the enemy, learn to fear… and maybe fall in love at some point along the way.

(This fic will be updated on a weekly basis.)

‘So I got a quirk. Yeah, I do. It’s too bad my quirk has it’s own sentience whose pride and ego far surpasses its size and length of its tail. Well I do have one thing in my favour. All Might is training me. That has to count for something right?’

Who would wake up first?: It would probably be both. They both are well put together people. I’m sure neither of them sleep through alarms.

Do they have nicknames for each other?: Well they have to call eachother Creati and Deku for work purposes. But I think as they get closer, Momo goes from calling him Midoriya to Deku.

How do they apologize after an argument?: Momo is all about gifting back. Like she’ll make a matryoshka of All Might or something. With Deku is always a sit down face to face acknowledgment of fucking up.

What would they be like as parents?:Momo would be a very dotting mother. Very attached to her child. Probably becoming the primary caregiver. Not that Deku doesn’t help try to raise their child, but Momo just always wants to be there. This does cause a bit of friction as their kid grows up and finds Momo a bit smothering, while Deku is the cool lenient parent (even though Deku is a big ball of fears.)

Who is more romantic?: Momo. She will recite love poetry one their anniversaries.

Where do they go on vacations?: Well Momo basically can go anywhere. So they like to visit Hawaii, France, and Norway,

Who gets jealous easiest?: Deku, but its mainly because Momo is like the idol girl for a lot of creeps or flirts.

Who gets more excited for events e.g.. Birthdays, Christmas?: Momo. She loves thinking about the decorations.

Who is the most adventurous?: Momo.

Who is the most protective?: Deku.

What was their wedding like?: It was big. Mainly more on Momo’s side, but Deku used the extra seating to get in people like Mirio, Eri, and Kouta.

Who uses all the hot water?: Momo. But to her she’s always used to getting hot water.

Who would accidentally set the kitchen on fire whilst cooking?: Momo. She kinda has had people make stuff for her most her life.

Who initiates sexy times the most?: I don’t see either as really super sexual. Like they aren’t chomping at the bit to make love. They’re okay with like saving it for like an end of the week thing.

Who is more dominant?: It’s pretty even.

What would they do if the other one was hurt?: Momo would call literally ever specialist she knows. Deku would call in Recovery girl.

Who gives nose/forehead kisses?: Momo, but its mainly because Deku is shorter.

What their biggest fight was/will be about?: Insecurities. Basically a lot of their own problems with themselves the internalize but then project outward.

What is the song that summarizes them best?: Latch by Sam Smith and Disclosure

A headcanon?: They started dating when Deku was the only one who showed up for a study session

A Hero Rises
by Zabeck

Izuku’s meeting with All Might goes slightly different, with All Might being a more perceptive hero and teacher he gives Izuku a chance to talk. With Izuku receiving better training from All Might, and helpful support from his future classmates a hero will rise.

I hate myself I posted this on the wrong blog 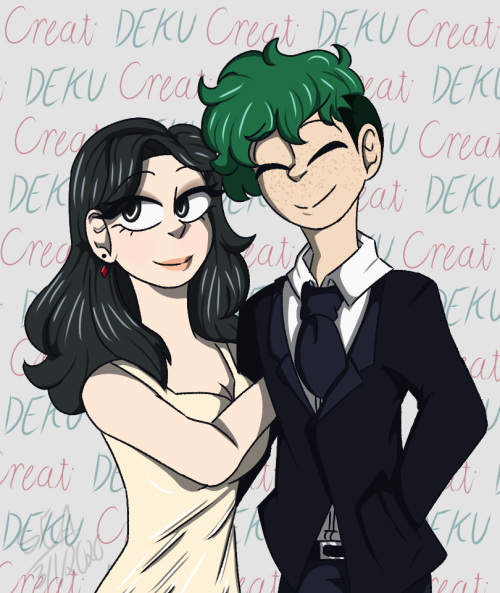 The day after the U.A. Sports Festival has changed their life forever. The day of the invasion and their world become a war planet. I’m not the owner of My Hero Academia or Star Wars

The day after the U.A. Sports Festival has changed their life forever. The day of the invasion and their world become a war planet. I’m not the owner of My Hero Academia or Star Wars

My Hero Academia: The Guyver
by pnew106s

I am experimenting with different stories and characters. This one is from an old Movie that I found entertaining. I really did not like the Cartoon, so I used the Guyver Unit from the Movie instead and Put in some changes to suit me. Swearing and violence. Some mature content. Eventually Izuku and Momo Get together. Struggling through their relationship along the way.

#some of these are too sappy, #dekumomo, #izuku midoriya, #momo yaoyorozu, #my hero acadamia, #rarepair, #izumomo, #I had a phase, #for a month and a half, #all I would do was sketch and, #scavenge fanfics of these two, #wtf
235 notes · See All
naruinouzumakiText

And the receiver of his anger was non other than All for One. Recently he managed to escape tartarus prison and every pro was looking for him. After his mentor and teacher All Might fought him and retired he hopefully thought it was over but years later he escaped.

When he first learned of All for Ones escape he broke twenty punching bags and a boulder. His wife Momo was the only one who could even get near him, two months later they found him.

“I see you finally found me ~All Might~.” Izuku stared at him, during his third year at UA All Might told him to carry the name All Might as his hero name. “You should have stayed in prison All for One.”

“I wonder, have you chosen a successor yet?” Izuku glared at him. “I see so you have.”

“I will make sure that your sent back to prison and that you stay there for the rest of your sad, miserable life!” “This will be difficult for the both of us!” And with that, the two titans of massive power clashed, the number one hero and the number one villain. The other heroes and police were making sure nobody got close and a news helicopter was flying around getting the whole thing.

During the clash of wills, buildings collapsed and pieces of rubble were used as flying projectiles makeing the whole area of kamino ward a danger zone. But in the end Izuku used the same finishing move All Might used in his fight,

The United States of Smash.

For most it was a call back to All Mights retirement. For others though it was the beginning of something new. Once the fight ended and All for One was once again put in prison Izukh was rushed to a hospital where he got patched up. Once recovery girl said it was ok to go in, Izuku was greeted by the faces of his wife and kids.

I write a lot of bkmm, especially of the brotp variety right.

But what about DekuMomo brotping? My soft babies. Hear me out.

Their friendship starts rather suddenly.  The weight of the world has been thrust upon his shoulders and she just happen to be in the vicinity of an episode of doubt and anxiety. It’s not something she usually associates with the ever so optimistic and capable Midoriya, but it’s something she can relate to.

She comforts him and begins to think of ways she could assist him, which is easier said than done. The boy is a perfect blend of hardworking, determination and compassion; she sees why All Might chose him as a successor. He’s not really lacking in any area except having a backbone and she leaves that to Bakugou and Todoroki for hers is lacking as well.

She provides little things; company, stimulating conversations and strategic analysis. She discreetly enables him to admit his feeling to a certain someone, who she knows feels the same way. She makes sure he knows when to stop when he starts to beat himself up relentlessly. She plays the peacemaker when the boys-Bakugou-forget to play nice.

She starts to see him like a brother of some sorts. He’s small and unimposing and her instinct to nurture adopts him as so.

Midoriya, who is nothing but grateful and loyal, helps her with what she needs the most-confidence.

Its different from how the others help her in combat and skill building, he has the most impact on her.

#dekumomo, #my soft children, #brotps for life, #momo growth, #my jots, #my writes, #i will probably brotp everyone with momo, #its only right, #yaomomo, #yaomama
36 notes · See All
madnimrodLink
Cobalt Star - Chapter 16 - Admiral_Drifter - 僕のヒーローアカデミア | Boku no Hero Academia | My Hero Academia [Archive of Our Own]https://archiveofourown.org/works/16748425/chapters/52401709

Why are they simultaneously leaving so little and so much room for jesus? 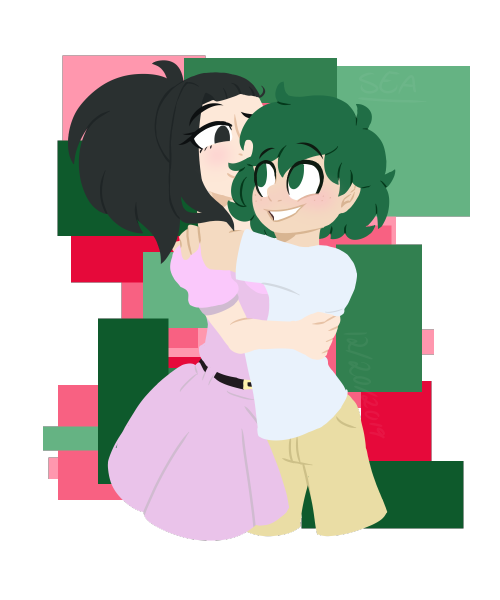