So, out of curiosity, for those who’ve read Rise…what do you think the elements of the prophecy from Dodona stand for? I’ve had a few divergent interpretations offered to me, or posted in reviews. Some are right, or partly right…some are not. (grin)  But it’s always fun for authors to hear what readers think. And no, I won’t spoil you. But if you’ve got to that point in Rise, you may have a better grasp on what the series title means. :-)

Dodona in Epirus in northwestern Greece was the oldest Hellenic oracle, possibly dating to the second millennium BCE according to Herodotus. The earliest accounts in Homer describe Dodona as an oracle of Zeus.

#Greece, #Videos, #Dodona, #Dodoni, #Oracle, #Ancient Greece
14 notes · See All
pasafarianministriesofnightvaleAnswer
I love you, but you have to do your own taxes. -DP

This is Dodona, the oracular shrine sacred to Zeus in Epiros, near to where Olympias (Alexander’s mum) would have been born. It was one of the two most significant oracular shrines on the Greek mainland, and arguably older than Delphi.

We have mixed reports about how it worked, but the oak tree and doves seem to have been important, along with, perhaps early, giant bronze cauldrons that “sang.” The first oracles may have been men, replaced later by 3 women, who either read the cooing of doves in the tree, read the rustling of oak leaves, or/and were called “Zeus’s Doves.” The sources vary, and are a mess, but it’s a beautiful site, even if much of the later size owes to the Hellenistic era, especially the reign of Pyrrhus. 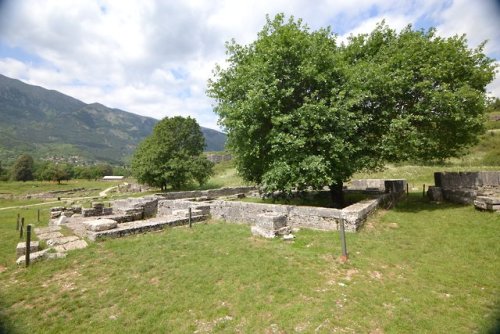 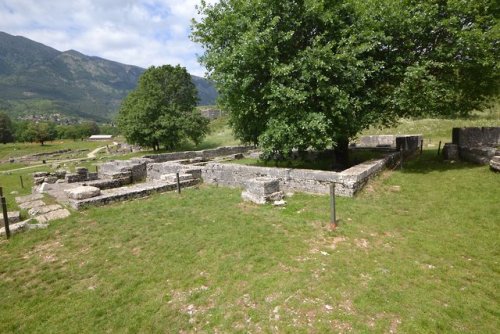 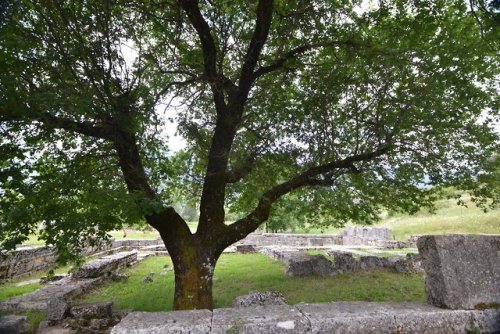 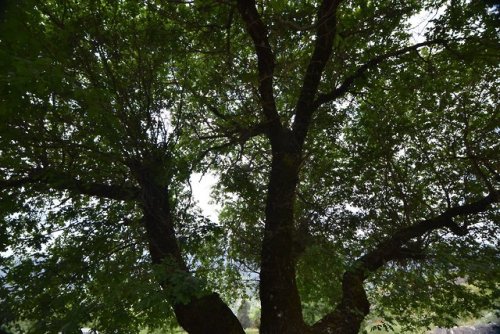 Oak branch with leaves. The sacred oak served as Zeus’ residence in Dodona. 4th-3rd cent. BC 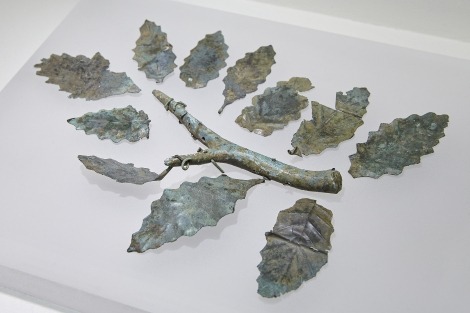 I wonder if the arrow of Dodona has seen Monty Pyton and the Holy Grail.

That feeling when even the talking arrow of Dodona has friends, but you are spending your Saturday night drinking Valhalla herbal liqueur alone while scrolling Pinterest… 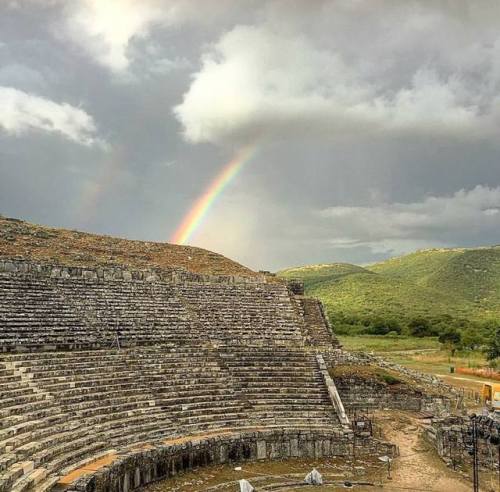 Even though Apollo’s oracle at Delphi is much more famous, Zeus also had an oracle in Dodona in northern Greece. Fortunately, many of the questions people asked survived because the petitioners had to write them down on lead tablets. Among those are:

“God. Gerioton asks Zeus about a wife. Is it better for him to take one?”

“God. Good luck. Archonidas asks the god whether he should sail into Sicily.”

“Did Thopion steal the silver?”

I love how it was apparently totally normal to ask the gods completely mundane questions.

Dione was the Titan goddess of the oracle of Dodona in Thesprotia, and the mother of Aphrodite by Zeus. 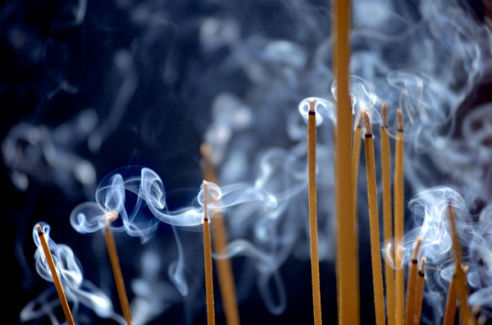 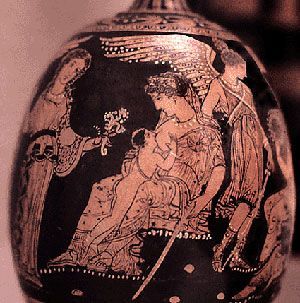 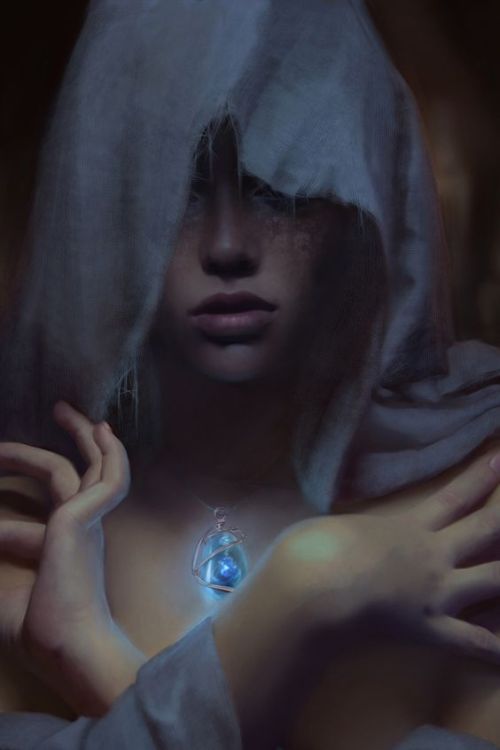 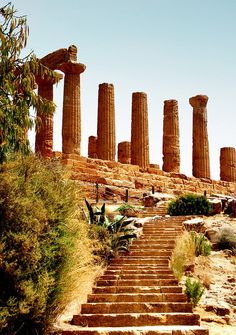 Dodona: The Oracle of Sounds

Oracle of Zeus at Dodona, Greece

Though it never eclipsed the Oracle of Apollo at Delphi, Dodona gained a reputation far beyond Greece. In the Argonautica of Apollonius of Rhodes, a retelling of an older story of Jason and the Argonauts, Jason’s ship, the “Argo”, had the gift of prophecy, because it contained an oak timber spirited from Dodona.

In c. 290 BCE, King Pyrrhus made Dodona the religious capital of his domain and beautified it by implementing a series of construction projects (i.e. grandly rebuilt the Temple of Zeus, developed many other buildings, added a festival featuring athletic games, musical contests, and drama enacted in a theatre). A wall was built around the oracle itself and the holy tree, as well as temples to Dione and Heracles. 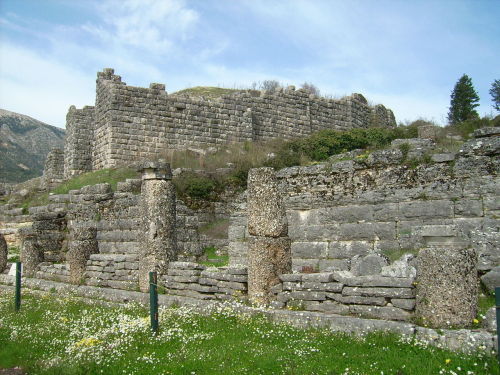 The DodoNA Project Aims: “DodoNA” is a metaphor. The oldest oracle of ancient Greece was at Dodona. Priestesses would interpret the rustling of leaves of an oak tree to predict the future and to advise the correct actions to be taken.

The DodoNA Project Aims: “DodoNA” is a metaphor. The oldest oracle of ancient Greece was at Dodona. Priestesses would interpret the rustling of leaves of an oak tree to predict the future and to advise the correct actions to be taken. 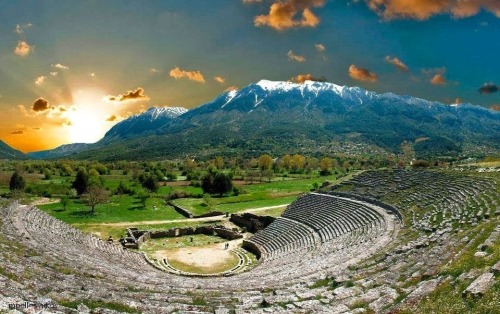 High Zeus, lord of Dodona, Pelasgian, living far off, brooding over wintry Dodona, your prophets about you living, the Selloi (or Helloi) who sleep on the ground with feet unwashed. Hear me. - The Illiad.

Priests said to sleep on the ground of the Sanctuary that interpreted the rustling of the wind through the oak branches. Querents would write their question on a lead tablet and wait for an answer.

According to the Geographer, a sacred oak tree is revered in Dodona, because it was thought to be the earliest plant created and the first to supply men with food. And the same writer also says in reference to the oracular doves there, as they are called, that the doves are observed for the purposes of augury, just as there were some seers who divined from ravens. - Strabo

Later sources suggest that prophecies were interpreted from the movement of doves/pigeons that roosted in the Sacred Oak.

And then three elderly priestesses, named Peleiades (“Doves”), were appointed to be the voice of the oracle.

Theories suggest that the origins of the gongs were in the form of a ‘wall’ of bronze cauldrons on tripods that surrounded the sanctuary before any stone walls were built. These cauldrons were set so close together that when one was struck by hand or the wind then the whole line would vibrate to create artificial 'moaning’ that was used to either ward off evil or divine by.

In addition to this means of producing sounds Dodona also had another device, probably at a later time but also perhaps concurrent with the gongs. Two pillars standing close together supported a great bronze cauldron and the statue of a boy. The boy held a whip in his hand, which had a chain attached to it instead of thong. The chain hung down into the cauldron. Even a light breeze would swing the chain against the side of the cauldron and set the bronze bowl vibrating. The technical wonder was a present to the oracle from the Corcyreans. The apparatus was certainly put into operation, because it too became the object of the expression “talking like the Corcyrean whip,” which mean the same thing as “talkative as the bronze bowls of Dodona.” - Mysteries of the Oracles by Philipp Vandenburg.