I remember the little skits? Writers would do in the beginning and/or end of chapters where the characters would introduce the chapter.

Eg in a pokemon fanfic

Writer:omg guys here’s the first chapter. Ash, do the honors!

Writer: well I’ve got pictures of misty in a swimsuit if you do!

Ash: whoa okay they do not own Pokemon and enjoy the chapter! Now gimme!

I never see that these days. It probably for the best. What do ya’ll remember?

I thought it was a bookmark but it was a rec!! and they even added a note!!: “How the fuck can this fic get everything I like right, it’s just not possible”

Fanfiction recommendation: another dance by adcaelum

2. it was only until her eye caught a bright looming house on top of the hill that seemed vaguely familiar did that panic spike rather than relieve. she almost swerves off the road when realization hit. his 73 questions with vogue. she’d seen it trending earlier this year. biting her lip, she turns onto his street and heads toward the impressive beacon of lights and glass. deep down vanessa was secretly hoping that he still lived there so she could thaw her frozen hands. 3. but she also didn’t want to confront him under such odd circumstances and after an absent 10 years. would he even be happy to see her? what if he refuses her? he could be with someone right now. is she even ready for this? but when he opens the door in nothing but a black tee and flannel pajama pants, 5 o’clock shadow grazing his all too familiar jaw that framed to his all too familiar face, she can’t even seem to remember her name. 4. one look at each other and a tsunami of nostalgia floods around the two. through the awkwardness and surprise, the two adults find themselves rendered to teenagers again when he sheepishly asks her if she wants to come inside. she promises she won’t stay long but the tv says otherwise when warnings of closed roads and heavier overnight snowfall echo throughout the large estate. the energies of zac and vanessa together in the same room bubble like a chemical reaction. 5. and it’s not long until they’re laughing on the couch together, expensive wine that he saved for her given the serendipitous chance swirling in their systems, the storm and outside world forgotten. memories roll in, confessions and apologies slip, old habits become not so old, and they end up soending her birthday in his kitchen as a first date because of course he remembered and the count for romantic things he’s done for vanessa was not going to stop here. wrote this in 15 min in bed SORRY

THIS IS SO GOOD THOUGH OMFG!

“This… You… You’re joking, right? This is a joke,” Izuku said with a light chuckle.

Todoroki just blinked at him innocently, and if Izuku had to admit, a little sheepishly.

Better Than Sex - a Root/Shaw fic

The mark is across the diner from Shaw when Root slides into the booth opposite from her.
“Hey, sweetie,” she says, beaming, all cat that got into the cream. Like usual.
“You shouldn’t be here,” Shaw mutters around her mouthful of eggs. “I’m working.”

A fic gift for @ladyterabithea​ for @fandomtrumpshate​ 2020! This was a delight to create. Featuring: food as a gesture of affection, Shaw going on a date with a cool older woman at one point, overt come-ons, and mildly embarassed defensiveness bordering on hostility. Spoilers for season 3 onward and a fix-it of sorts!

A few still images from the partially animated Distorted Reality trailer I made a little while back.

For the most part, the backgrounds were all taken directly from the show, though with some color changes and other adjustments, and occasionally some drawn/painted elements added in.

The last image of the gaang from the canon world was one I ended up cutting.  (Ironically one of the few I did the full background for.) The composition was taken from the scene from the episode Sozin’s Comet, Part 1, where Zuko explains to the others his father’s plan to burn the Earth Kingdom.  The plan was for it to simply be a still image and zoom out slowly, but I didn’t think it was quite working, so I replaced it with the campfire clip instead.

In working on the trailer, I took the opportunity to change a few things from the comic to be a little more accurate with the fanfiction, such as Aang wearing an Earth Kingdom disguise in the canon world, and being scuffed up/covered in burn injuries.

Art is association with the comic adaptation of the fanfiction Distorted Reality. 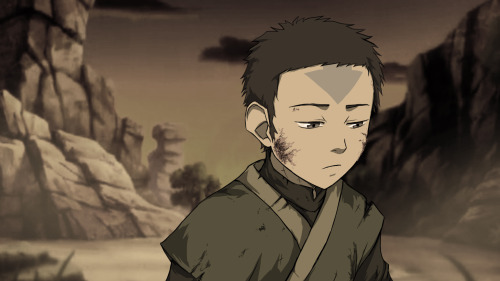 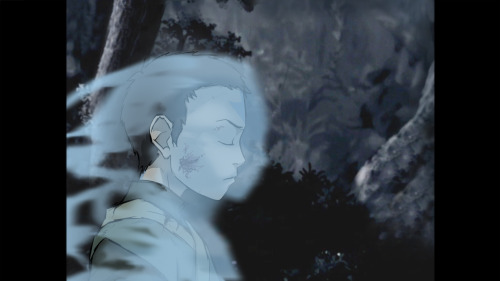 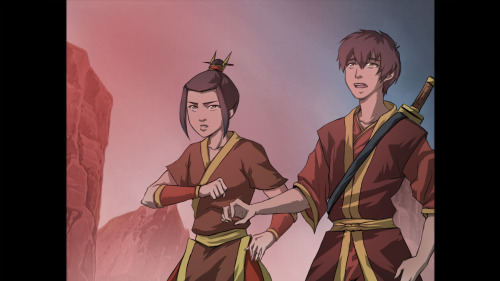 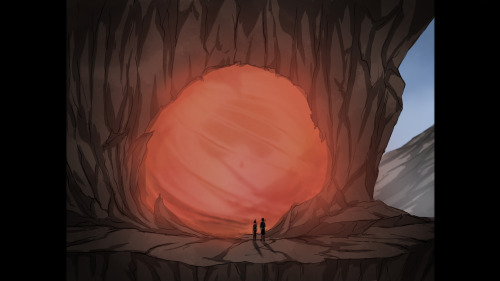 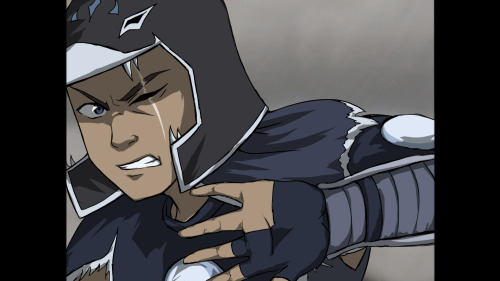 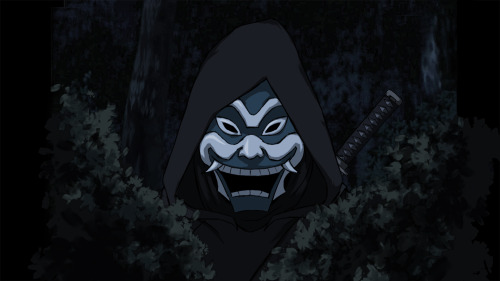 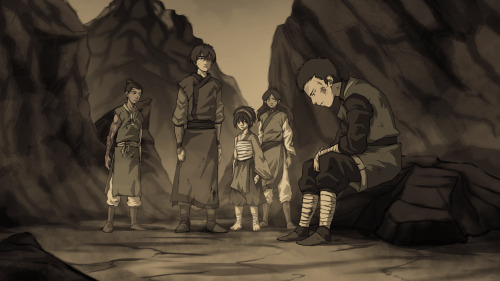 Oof, you know I love some soft, comforting boys.

I raise you: poor little first year Sirius on the train back to London, already missing the hell out of Hogwarts and his friends before they even leave Hogsmeade, crying to Remus because he doesn’t want to go home.

Summary: During one of their dates, Ruby gets curious if Penny can eat. Turns out she does, but a little differently.

Notes: Simple exploration, just general fluff and dorkiness from Ruby and Penny. Also no beta coz we love dying like Summer.

That Saturday morning was probably a little sweeter for Ruby. During her days off she opted to roam around Atlas, or if she felt like it, Mantle. With all the rush of the battle, she’d never gotten much opportunity to explore the nooks and crannies of Haven. Now, as an officially licensed Huntress, she had plenty of chances to go anywhere in Atlas and looked forward to doing so. Being the Kingdom with the most advanced technology in Remnant, she was more than happy to discover something new everyday. Something, or someone, just like the android who walked with her that morning.

Mr Ego Ships It
by blacktea

one of the best feelings is when you want to read fic and it’s specifically your own fic that you want to read. And you go back and read it and go, “man this was really good!“ and feel really accomplished and proud.

I hope that all fic writers who haven’t had a moment like this will have one soon! <3 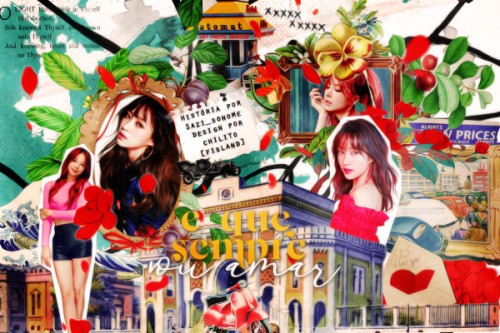 Okami [REDACTED] has always lived knowing they were too overpowered for the world, they were the person others were friendly to because Okami being a villain meant the end of the world. Agreeing to be a teacher might have been a mistake, but their students will soon prove that there are people who will be friends with an overpowered [REDACTED] just because they want to be friends with them.

I’ve done my research and Junie B. Jones and a Little Monkey Business is 6603 words long, therefore meaning I have written the equivalent of almost 2 entire Junie B. Jones books and I think that is truly the biggest accomplishment of my experience writing this fanfiction so far.

ALSO my chapters average out to a little over 3000 words each, and if I do end up writing around 86 chapters as my outline currently estimates I will have written a fanfic around the same length as the entirety of Harry Potter and the Order of the Phoenix by the end of this.

But let’s not get ahead of ourselves because I’m only on chapter 5 lmao.

Summary: It’s Valentine’s Day in Avengers Tower, and Sam Wilson is prepared to go all out to make sure you have the best day possible. The last time he woke up this early was for a mission and, with the number of world ending events having been severely limited in the midst of a worldwide pandemic, he’s been having a lot of time to plan this day.

A/N: click this link to tell me what tag lists you’d like to be added to! carryonmywaywardbucky’s taglists!!

A/N: I’m in desperate need of soft!Sam after the week I had and I’m taking you all down with me

Sam Wilson was never one to wake up early. Unless he had been forced into a run with Steve and Bucky that is. You, however, were usually up long before he was. That little fact made putting his Valentine’s Day surprise into motion a bit harder than it should have been.

It was still dark outside and the streets were almost bare as Sam quietly walked into the kitchen. The lights turned on as he pulled a bowl from the cabinets beneath the counter and set to work.

You rolled over in bed, your arm flopping over into the space beside you. When it didn’t come into contact with your sleeping boyfriend’s chest, you were fully awoken. You were hoping, what with it being Valentine’s Day, Steve would have given Sam the morning off from training. Apparently the freshly baked apple pie wasn’t enough to persuade him. Before you knew it, you were back asleep.

“How long have you been down here?” Bucky yawned as he stumbled into the kitchen and made his way over to the coffee machine.

“What time is it?” Sam asked, shaking the can of whipped cream.

“Only like three hours,” Sam said, pulling his bottom lip between his teeth as he focused on creating perfectly sized dollops of whipped cream on the freshly made waffles.

“Three hours? I’ve never seen you so focused on something,” Bucky said as he leaned against the kitchen counter beside Sam. “What’s all this for, anyway?”

“It’a Valentine’s Day, dude,” Sam responded, not sparing Bucky a glance as he reached over for the bowl of sliced strawberries. He placed them on the whipped cream before standing up, brushing his hands against his pants, and admiring his work.

Summary: Barley’s helping Ian out with some spells and decided to add an extra factor to their training.

“Why are we even doing this?” Ian complained, leaning against the back of the van, renamed Guinevere II accordingly. In his hands was the staff left to him by his father, or rather a splinter of it grown to human size. Right now he was tapping it impatiently against the floor. He had plans with the kids from science class later, and he was anxious to get this over with and get going.

“Just because you managed to pull off a couple cool tricks when you were desperate doesn’t mean it’s gonna be that easy all the time.” Barley pulled the spell book out of his duffel bag, dusting off the pages. “You need practice, and what better way to practice than with your beloved brother, master of all things magic and/or awesome?”

Ian rolled his eyes, slumping back on the van. Clearly he wasn’t getting out of this anytime soon. “This whole thing is pointless!”

“So you say now, but what if a bigger dragon comes, ay brother? Then what shall thee do?”