I got caught up watching Harry Potter and the Half Blood Prince for reference in a Hogwarts 5e one-shot I’m about to write… Sorry for the late post! Just in time for Halloween, cartoonist Peter Ricq is bringing Ghost Are People Too to Kickstarter. The 42 page illustrated book, about a simple ordinary ghost named Ethan Alby, is written and drawn for spooky living people of all ages and perfect for Halloween.

Ethan has a family—just like you. He likes playing with toys and his dog, Mini Ricky. Sometimes, though, Ethan gets scared. In Ghos… 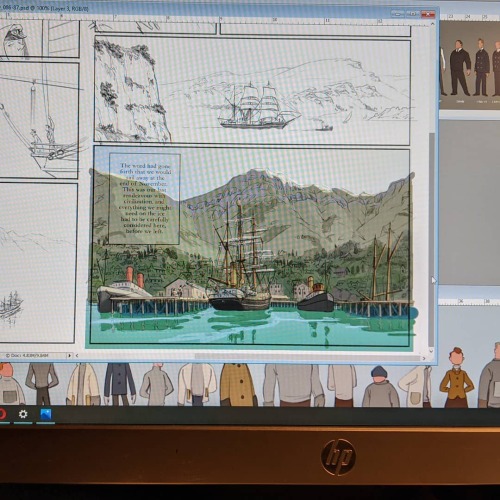 BOOM! Studios has announced a  new original graphic novel Girlsplaining: A (Sorta) Memoir, by cartoonist Katja Klengel, tackling the subjects that have shaped her life: from body shaming to the exploration of her sexuality, and from the representation of women in the media to the social pressure on women who don’t have children, available in March 2021.

Why do we fear the word “vulva” so much?…

A Luchador is on a Quest for Revenge in La Mano del Destino. On #Kickstarter now! #Comics #ComicBooks

La Mano del Destino is a 6-issue mini-series about a Luchador’s betrayal and superheroic quest for revenge and Faustian bargain; set in a swanky 1960s Mexico told in a Silver Age style. It’s currently being funded through Kickstarter.

Created by Jason Gonzalez the project ends on November 3 and is still short of its $39,242 goal. The series is complete and this is to fund the 400+ page,… 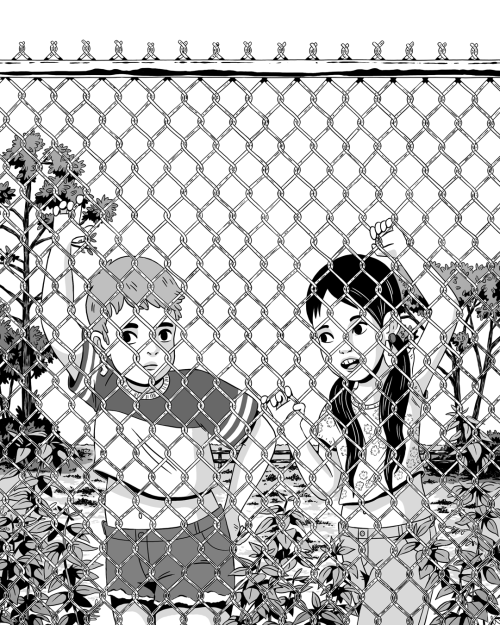 The moon was in love with the sea

A piece of mythology from The Blackout.

The goddess of the moon, Luna, and the goddess of the sea, Mare, had a lifetime old partnership. Luna would control the sea’s tides, giving the ocean life and movement, and Mare would give the moon a vast beautiful portrait to gaze upon, so she would never get bored.

Luna and Mare ever enjoyed each others company, they never grew tired of gazing upon each other, until Luna gazed a little too deeply, for a little too long.

Luna could feel something grow in her chest. A funny sort of electricity, a warmth like the suns, like the sting of a cold ocean wave. She now longed to stare at Mare closer, she wished to sink into her waters, so they could forever be one.

This feeling scared Luna, she didn’t know what to make of it. She thinks the feeling has been blossoming in her chest for a long time, like a deep blue rose, slowing sprouting and blooming. She confided in her three sisters, the Lunulas, about the feeling. They told her she should tell Mare, and Mare would surely feel all the same. And so Luna tried, every day since the epiphany, but the words would not let themselves out of her throat. Mare was too stunning, she shook Luna to her core, stopping the beat of her heart.

She couldn’t do it, and so she did the only thing she knew to do, she turned around.

She turned towards the infinite black void behind her, filled with twinkling stars. it was a magnificent sight of course, but incomparable to Mare’s sea’s. Mare would call out to her, asking why she was no longer facing her, and all Luna could do was stay in her place, fearing that if she turned around, if she even answered Mare’s calls that she would explode like a dying star.

One day, Mare stopped calling out for her, and Luna knew it was the end. There was no else to blame but her selfish fear.

And than she heard a wolf howl. Normally, she wouldn’t think much of howling wolves. Wolves always spoke to her, they were the only beings who knew of her true being, who worshipped her so deeply. But there was another one, and another, and another, until there were hundreds of wolves, calling out to her, begging her. Everyone knows the moon cannot resist the call of a wolf, and so after the 107th wolfs howl, she turned around.

And what did Luna see? She saw hundreds upon hundreds of wolves, sitting on top of mountains and cliffs, surrounding Mare, who was standing above whirlpools and crashing waves and tsunamis, reaching out for Luna, reaching so desperately, trying to tell her something.

“I love you” she said, her voice thick with emotion, spoken with such certainty and conviction that Luna had no other choice but to believe her.

“So please, don’t stop looking at me”.

How foolish could i be, thought the moon.

And so the deep blue rose in Luna’s heart blossomed to its fullest, and she ran, and she jumped, and she reached out, and she was finally one with the sea.

they sealed their love with a kiss and a promise.

The moon will never stop looking at the sea.

The moon was in love with the sea,

She loved her as more than she could ever be,

Her gentle glow shone so dearly,

Upon the rapid shores of the sea.

The sea was in love with the moon,

Even in the muckiest lagoon.

The wolves they sing of their eternal love, a partnership that keeps the below and above.

A perfect, shining white and blue,

They celebrate the sea and the moon.

Luna and Mare what will they be,

They are much more than the moon and the sea,

Their partnership will always live on,

But now their love is just the more strong.

Luna and Mare, they’ll always be,

The moon is in love with the sea.

#all names are latin translations, #im going to be making an illustrated version of this in the future, #and doing instrumentals for the song, #The Blackout universe has its own mythology, #this is onw of the stories, #the blackout, #comic book, #graphic novel, #poem, #poetry, #mythology, #folklore, #writing, #short story, #oc, #witchcraft, #kind of a draft, #lunulas= little moons, #the google translate version isnt accurate
1 notes · See All
duckseamailPhoto

[ID: A book cover that says “Gender Queer” in big white letters and “A memoir. Maia Kobabe” in smaller white letters. The background is a white person with short brown hair looking down into water. Then, there is another drawing of the same person, but younger with long hair and no shirt standing in water, but it’s upside down, like the two people are reflections. End ID]

This book has been on my list for awhile, and luckily my school library has it! So, Gender Queer by Maia Kobabe a graphic novel about the author’s journey discovering eir gender and also asexuality. I thought the art style was really cool, and it was kind of familiar, and I’m pretty sure Maia Kobabe is on tumblr? Or has some art on the internet somewhere? Anyway, I loved looking at all the pictures! As for the plot, I thought it was really good! It’s very much about the struggles and triumphs Maia had with figuring out eir gender and it’s really interesting to read, because I have definitely not had this experience lol. One thing I didn’t like as much was that it felt really short. I read graphic novels really quickly, but there weren’t chapters in this and so some of the moments felt like they lacked closure. The part about the author discovering eir asexuality was there but less so than the gender aspect, but I liked it because there were things I could relate to their and it was kind of comforting in that way. It also made me kind of anxious too, so many many feelings! Overall, I would definitely recommend this book to anyone who is a fan of graphic novels and stories of real queer adults showing you that it’s not bad all the time. 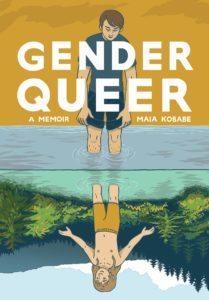 400 colour layers and climbing… first exteriors in months, time to go wide, makes a change when you can focus on something further than a metre away. 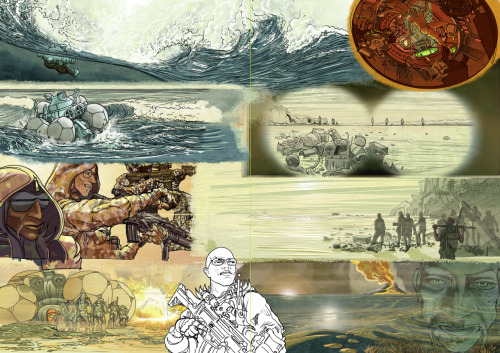 Power Rangers: Sins of the Future preview. Can Jen and Wes survive the threats to their past, present and future? Or will their love be the end of all time as they know it? #Comics #ComicBooks #PowerRangers #MMPR

Power Rangers: Sins of the Future

An all-new graphic novel set after the events of the hit Power Rangers: Time Force television series that features two of the most popular Rangers of all time, from Trey Moore (Mighty Morphin Power Rangers), Matthew Erman (Bonding) and Giuseppe Cafaro (Saban’s…

at the request of friends, redrawn one page from the graphic novel “silver eyes”

Finally read as a preview for a 9 and a half year old, it had been on my list to read someday. Seems fine. It was enjoyable and cute while also handling illness and death. At the end there is more information and further reading on Dias Muertos and Cystic fybrosis.

Blake & Mortimer Vol. 8 The Voronov Plot is one of the best adventures from this series. #Comics #ComicBooks

Tom Clancy is one of those writers whose eye for detail and character development makes him one of the best. His intimate knowledge of the inner workings of how people like Jack Ryan would operate is immense. That whole series of books was as much as action as it was cerebral maneuvering.

One of his best, and probably the best film adaptation, despite who was playing the titular character,…

Long, long ago, sprites were the caretakers of gardens. Every flower was…

From Pyongyang: A Journey in North Korea by Guy Delisle 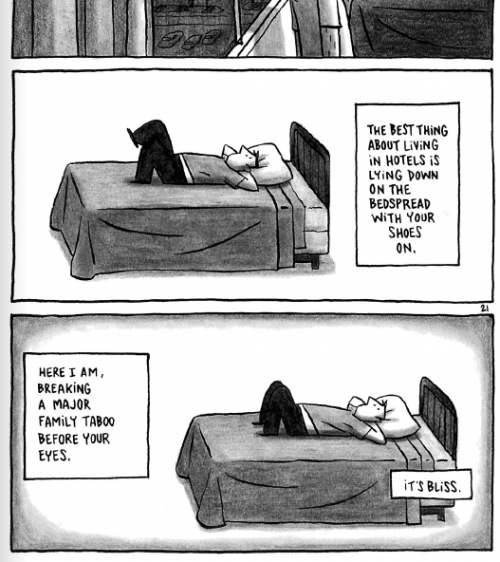 Z2 Comics has announced that True War Stories,the ambitious project pairing members of the US military with the biggest names in comics to share real war stories told by those who lived them, will be available for Local Comic Shop Day. This unique project, assembled by the multiple-Eisner nominated writer/editor, Alex de Campi and co-edited by Iraq War veteran Khai Kumbaar is an entertaining and…

Love this book so much.🖤🦇