Trending Blogs
#Haikyuu
joandmirLink
its cool, i have socks on - Chapter 3 - but he's so hot - mrrefreshing - Haikyuu!! [Archive of Our Own]https://archiveofourown.org/works/27500053

Akaashi whipped his head towards the sound, fuming.

My god look at those biceps.

Oh my god look at those thighs.

What I wouldn’t give to have his thighs wrapped around my head.

don’t you just love it when suna rintarou—-

Since there’s no info regarding girls’ teams in haikyuu, I create their profiles.

Current Concern: Boys’ Team captain keeps inviting them to “have a friendly (not so friendly) match”.

Current concern: “Sakura senpai, there’s no need to date boys when you can date me”.

Current concert: “Doesn’t know how to tie her hair with actual hairbands, she likes to wear wool strings”.

Current Concern: “Only plays volleyball because she’s tall, all she wants is to sleep”.

Current Concern: “Wants to train alongside the boys but captain Sasaki won’t allow it”

Current Concern: “I don’t even know… I just live”. 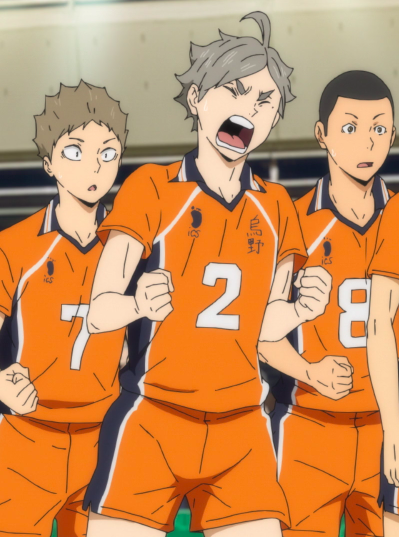 44. I don’t think anyone has ever said that to me before.

You and Noya had been dating since the beginning of his third year of high school. Although it was difficult for him to get over the crush he had developed for Kiyoko, it was more important to him to see Tanaka happy. Plus, love had smacked him harder in the face the first time he saw you, diving for a volleyball like it was nobody’s business. He remembers the way Tanaka slowly shook his shoulder, brows furrowed

Anyway, the two of you were currently at his home, curled up into one another as a very cheesy action movie played. Nishinoya was lost in the film, eyes wide and constantly stuffing handfuls of popcorn into his face while babbling about some of plot points. You on the other hand, well it was easy to admit that you enjoyed watching Noya and his reactions more than you enjoyed the movie.

Something very predictable happened on screen (a character death, oh no.) And Nishinoya’s gasp startled you more than the scene itself. Despite your form which currently sat situated between his legs he shot forward, almost knocking you right off of. “DAMN!”

“Didya see that baby?! They actually killed him off JUST LIKE THAT?! I really didn’t see it comin’ I mean holy SH–”

His words suddenly became lost to you as you stared at him. A smile of your own curled on your face as you watched him rant. The way his hazel eyes had a glow that held excitement, enjoyment, a glow that radiated like the sun itself. The way his hair fell perfectly over his forehead, and despite his need to spike it up every morning, it looked just as pretty down and shaggy. The way his grin was so contagious you could even hold back the giggle that slipped past your throat.

The sound of it finally made Noya pause, his brows furrowing as one palm went back to your waist, subtly realizing his shifting might have made you uncomfortable. “What’s so funny (Y/N)? This is a serious plot development–”

That shut him up again. The realization of your words hit him slowly as his eyes widened, light brightening up behind them as his mouth parted a bit. There was a silence before he spoke up.

“I love you.” You said it just the same, keeping that soft smile on your face.

You could see the cogs literally turning in his brain, making you want to laugh more and yet you held it in while he worked it out in his brain. Once he finally blinked his grip on you tightened a bit.

“I don’t think anyone has ever said that to me before.”

“You don’t think?” You had to question, knowing very well you were Noya’s first serious partner.

“Well I mean– other than the homies, y’know Tanaka tells me he loves me all the–”

“Yuu–” you interrupted him, unable to hold in the laughter this time around.

“I love you too baby, love you so much.”

A/N: THIS IS NOT AN SMAU FIC. I want to work on my writing as well, so I will be writing this one and cross posting to AO3 when it is complete :)

Y/N L/N and Hajime Iwaizumi had the relationship couples could only dream about. They were middle school crushes turned high school sweethearts. College was supposed to be bliss for the power couple, with the next step being marriage. Too bad, Iwaizumi decided he’d outgrown Y/N and thought he’d be better off without her.

With a 7 year relationship down the drain, Y/N is left with no choice but to pick up the pieces with the help of her best friend Tooru, and her childhood friend Sakusa. The same friend that’s harbored feelings for Y/N for quite sometime.

Her last year of college will prove, that there were always better men out there for Y/N. Better looking and more successful men than Hajime Iwaizumi; and it’s up to Oikawa and Y/N’s friends to help her see that these men can give her the world. But it definitely won’t be a walk in the park, especially with jealous fans, scheming exes, and toxic friends coming into play.

I HAVE A VERY IMPORTANT ANNOUNCEMENT

#IM GONNA STOP NOW., #this is the last time ill talk ab it, #its honestly tough being an oikawa stan LMAOAOSKJS, #the way i keep begging for oikawa crumbs every ep, #and next week im finally getting em 😭, #haikyuu
2 notes · See All
palerozeText

hinata wished you to have a good health! Now smile back at him!

He pushed his way through the thickets. Branches poked into his side along the weathered, woody trail. Despite the wilderness, Pvt. Goshiki crept onward through bush after bush. He was sure these were the directions Semi gave him.

Then, sure enough, like a page out of Hansel and Gretel, there stood a chocolate-colored cottage made of dark wood in a clearing.

Goshiki panted, astonished anyone lived in such a distant place, but it made sense to avoid detection. These were experts after all.

There was a special sequence of taps Semi told Goshiki to use when knocking: 3-2-3-1. He practiced the sequence in the air before attempting it for real.

He nervously began. Three taps, then two, then three, then one. He breathed a sigh of relief that he executed it perfectly.

A few moments later, an eye slit in the door parted, and Goshiki could see the suspicious, drilling glare of the cottage owner.

“Are you hungry?” said the man inside. It was the code that confirmed Goshiki was at the right place.

The man clopped the slit shut, and then the door opened with an eerie creak.

See below for Request Rules and update on pending requests

My man made them back up once again. He removed the heavy aura aroynd their team without noticing anything.

You know.. Fukurodani Manager, eats like Bokuto and Hinata combined.. basically me irl

On the right here all gorgeous and all

She’s one of my favorites and I appreciate her🤍🤍🤍🤍

P.s. I couldn’t find the artist to mention so if you see this I LOVE YOU AND YOU ARE AMAZING

have two shitty kenma edits cause he was very cute this ep :)

─➤ @theastroooooworld​ 𝐬𝐞𝐧𝐭 𝐚 𝐥𝐞𝐭𝐭𝐞𝐫 :
❝oi oi oi nikki ♡! i hope you are well as always. can i have hc’s for Tanaka, Ushijima and Bokuto (separately) ? how would they behave with their childhood best friend who supports them since their beginning in volleyball but with whom they gradually fall in love ? thanks !!je t'aime tant, prends soin de toi et des tiens 🧡🌅❞

sealed with a magic kiss to blow your pain away,
nikki.❞

──➤ Tanaka Ryuunosuke sent you a letter, would you like to read it?

──➤ Bokuto Koutarou sent you a letter, would you like to read it?

──➤ Ushijima Wakatoshi sent you a letter, would you like to read it?

I need to print this in my room

Send me a headcanon and I’ll write you a drabble!

The mods need a little more time to judge and get back to all the applicants, so hang on just a tad longer if you haven’t received an email yet. Thank you for your understanding!!