“A herceg és a hercegnő 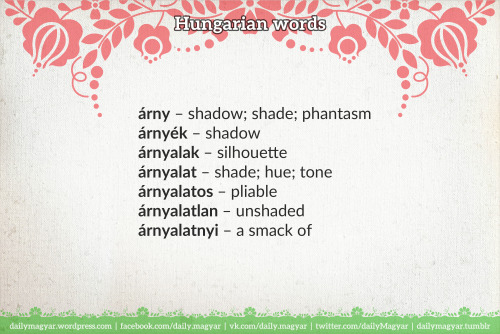 #szentendre, #macar, #hungarian, #hungary, #budapest, #travelphotoshoot, #travelphotography, #travel photo blog, #travel, #vacaciones, #vacancy, #vacation, #tourism, #tourist
1 notes · See All
lananiscornerChat
Mediterranean Russian
Finnish house mate: I don’t get why people always say German sounds aggressive. It sounds pretty straightforward to me.
Me: I think it’s because most of our words have the emphasis on the first syllable, so they sound really, like, in. your. face.
Fin: We do that too, so I guess that’s why it doesn’t bother me.
Me: Finnish always sounds a little weird to me. Like, where do your words start? Where do they end? I don't know. It's like a never-ending string of very beautiful sounding syllables and I don't know how to parse it.
Hungarian housemate: What about Hungarian? What does that sound like to you?
Me: Um... I'm gonna be honest and say I've never heard enough consecutive native Hungarian to make up my mind.
Hungarian: ...
Me: Hey, why don't you read us that excerpt from Chicago that we talked about earlier? Only this time in, like, actual Hungarian and not whatever weirdly Russian accent the actress had?
Hungarian: *reads that scene from Cell Block Tango* *looks up expectantly*
Me: That does kind of sound like Mediterranean Russian.
Note: We spend the next 5 minutes just laughing our asses off while Finnish housemate and I tried to explain why Hungarian does indeed evoke some of the same impressions as Russian (it's the hard consonants framing very short vowels, combined with rolled Rs and the different "s" sounds) and how I got to the "Mediterranean" part (to me Hungarian sounds softer than Russian in the same way Italian sounds soft).
#languages, #Hungarian, #Mediterranean Russian, #I am so sorry if that sounds offensive to any Hungarian followers, #your language is beautiful
8 notes · See All
jupiterovprstenText

Album: Sweet Dreams (Are Made Of This) (Steve Angello Bootleg)

Link for the lyrics (link a dalszövegekhez):