harley: so i then count backwards from 100, repeating affirmations to myself as i go.

harley: stuff like “i’m real” and “the place i’m going exists and will accept me”. stuff that confirms the reality, you know?

tony, walking in: what are you boys talking about?

peter: harley is teaching me how to shift realities so i can go date draco malfoy! i know he’s lowkey racist, but i think i will make him a better person.

tony, slowing backing out of the room:

Alright, panini head, I was going to ignore you but I’d like to wipe the floor with your ass first since you’re that desperate for it;

1. The reason they make so many references to her beauty and attractiveness is because MARISA TOMEI (the actress that plays Aunt May) chose it that way. She doesn’t want to be treated like an old lady, so she likes the frisky side more. She enjoys her character more when the character is not hanging around the apartment cleaning it, instead, she said she wanted May to be more independent, vibrant, and sensual. She doesn’t want to be the cooking-baking granny. Ever considered that? :) :) :) :)

“Well, I only got to be old very recently,” she chuckles. “The industry has decided I’m an aunt-type now. I’m like, is this the way it gets broken to me? I think that it would be wonderful to have her involved a lot more in active things and not only dropping him off at school or picking him up or being at home.” - Marisa Tomei.

“It’s lucky I didn’t know much about Aunt May, because I might have been horrified if I’d seen the original image of a grey-haired pensioner. Don’t toy with my heart, Marvel. Is that really how you view me?” - Marisa Tomei.

“Peter’s been a super-nerd with his studies, which is laudable, but my version of Aunt May tries to coax him out of that and broaden his interests, maybe even start dating,” -Marisa Tomei.

‘But there was what I thought the fans expected from the character, which was a strong maternal presence tending to home fires. I’ve always been very interested in and drawn to either illuminating or playing with this knitting together of both the innocent and the wild, the maternal and the sexual, and not having them be a cultural paradox.’ -Marisa Tomei.

2. ‘misogynistic part of the mcu??’ Are you 13? lmaooo only a minor who thinks that acting edgy and doing the ‘whitest white feminism’ act is cool would accuse them of something like that. Or accuse an actor/director they personally don’t know of such a thing.

3. I LOVE how yall act like May really hates Tony because a) some weird ass feminist fantasy you have where she punches him or some crap, and b) because you clearly don’t like Tony Stark and that’s it. Unfortunately for you:

“And maybe she puts on his costume, maybe that happens, maybe she goes out with Tony Stark for a little while. I don’t know, there’s a lot of things that could happen.”

“We’ll see. Hopefully the fans will love this new iteration and we’ll do more. Anyway, I think Aunt May should get her own spin-off. Something should go on with Tony Stark, and those two should get into their own capers.”

“She’s got to be sure he’s still having fun in the midst of all his studies. Even though he’s so capable and has so much potential as a student and as a protege of Stark Industries. But he also has got to get out there and have a party.”

“He (RDJ) recommended me for the role and we had a flirtatious little scene together in Captain America: Civil War. Having a familiar face around certainly made me more comfortable.” -Marisa Tomei.

And btw, I’m sorry you feel this pressed about irondad but unfortunately for you, his presence is going to be in Peter’s life forever. Dead or not. So you better get used to it :) :)

Peter: Mr. Thor, I have a new nickname for you.

Thor: Ah! Young Peter, what is this name?

Thor: I like it. I shall strike fear into the hearts of all mine enemies as the God of Himbos.

Thor: What is a Himbos?

I could swear I saw an incorrect quote with something similar to this somewhere. 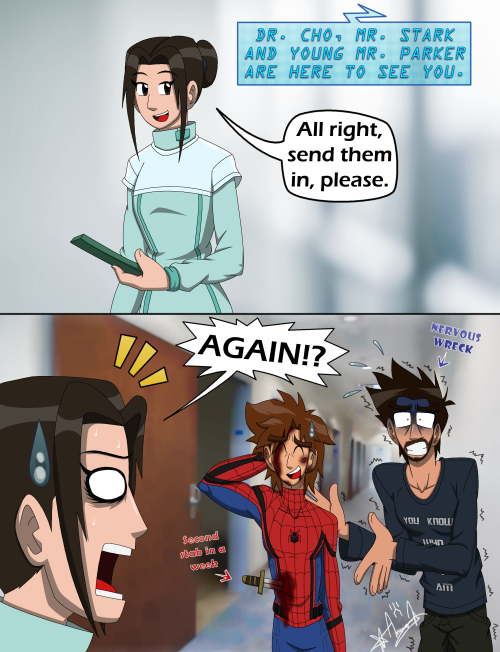 After a trip to the Barton’s home

Peter: You know those signs…the yellow ones with the deer

Clint: Yeah the deer crossing ones?

Clint: What about them?

Peter: How did they teach the deer to cross right there?

Peter comes into Tonys Sleeping Room, he’s got a build-a-bear in his arm.

Peter:Mr Stark, I am a horrible human being.

Tony *yawns*: It’s 3o'clock in the morning. What the fuck have you done?

Peter *sobbing*:I just killed a moscito. At first I thought it would be ok cause being a moscito seem like a pretty sad life. But now I can’t stop thinking about the fact that it might have had children for which it wanted the blood. Now they are going to starve! I didn’t even know it’s name. Did it love to fly?

Doctor Strange:What the fuck should I do?

Harley: Having trouble sleeping? Join the military. They teach you how to sleep anywhere.
Morgan: Trust issues? Get pregnant and see who sticks around.
Peter: Curious about the afterlife? Die.
Tony: …kids what the hell?

Peter: hi person in charge, it’s me, peter. I’m just putting in a simple request here. CAN I PLEASE STOP BEING SUCH A FRICKING DISASTER. thank you!

Tony, as soon as Peter walks out of the room: Hi person in charge. It’s me, a random person. Simple question. If I killed you, would I be in charge then? I’ll find you, :)

#a legit conversation I've had, #irondad, #spiderson, #tony stark, #peter parker, #a question, #an attack, #tony is dad, #peter is baby, #uwu, #hoW DO PEOPLE WRITE SO MANY TAGS
7 notes · See All
missloubannerText

A Stony + Spiderio/MysterySpider version of my The Old Guard Quote

Peter: how do I feel? Like a fucking burden to society, Tony.

Hi! You’re not overstepping :). I never really was very good at summaries, but I went back and added a bit from the story. Thank you for the suggestion!

If anyone is interested, you can read my first Penny Parker story here!

Aww, thank you so much Anon! I’m so glad you’re feeling better, and yes definitely! Emily is the queen of Penny Parker fics, and I’m so happy you suggested it because I’ve been meaning to write a Female!Peter story for ages now! Thank you again for your lovely words, it literally made my day and it warms my heart to know that you’re still enjoying the Soulmate AU after all this time (Sorry the sequel has been taking so long!). I hope you enjoy this fluffy one-shot, and have an awesome day!

Ever since the bite, Penny had always run a little colder than usual. In summer it wasn’t too bad except for a little extra sensitivity towards air conditioners, but winter was an uncomfortable game of layering singlets atop of shirts atop of jackets and even more jackets and still managing to shiver like a leaf in the wind. Safe to say, winter was far from Penny’s favourite season.

But after an unusually warm morning in late fall, Penny figured she could make it through the day with only a jacket instead of her usual jumper-jacket combo, and was pleased to say she made it through the entire school day without any trouble at all. Her last class of the day was gym too so by the time the bell rang her blood was beating warmly through her veins, adding a small skip to her step as she started her trek to the tower. It was Friday, which meant she would be spending the afternoon working on her suit with her mentor Tony Stark, and Penny didn’t think her day could get any better!

The universe seemed to agree though, because the thick, gloomy clouds that had been scattered lazily across the sky began to envelope the sun and sent the temperature plummeting by the second. The adrenaline that had kept Penny warm had faded long ago, and it was only now as she crossed her arms over her chest that she realised she had forgotten her jacket in the gymnasium. For a moment the girl considered turning back, but she was already halfway to the tower, and assured herself she could make it there with no problems.

As per her Parker luck though there was a problem, and that problem came in the form of rain. It was just light enough not to warrant an umbrella, but the chilled water on her bare arms only amplified the shudders running down her spine, and by the time she stepped through the tower doors her whole body was trembling like a drowned dog.

“Hey kid,” Mr Stark’s voice hummed when she entered the lab, closing the door behind her with shaking fingers. “I’ve got some new ideas for your suit that I want you to- wow! What happened to you?”

#tony stark, #pepper potts, #peter parker, #ironman, #pepp, #spiderman, #irondad, #spiderson, #pepperony, #ironfam, #omg, #this is honestly so accurate though, #like, #the characterizations are on point, #and i can imagine this whole thing, #another amazing one sam!, #thank you!, #mcu, #mcu incorrect quotes, #submission
268 notes · See All
funnyincorrectmcuText

Peter: I think I’m going to try to be more assertive, if that’s okay with everyone?
Tony: …
Tony: *sighs* Well, at least he’s trying.

Ideas From My Instagram Followers: Part Who Gives A Fuck.

PeterMJ but as a practical magic au

I can’t wait to fall in love.

New ones to come soon, hopefully!

May: so how was your stay at the Avengers Compound?

Peter: now throw that idea out the window.

Tony: *sighs* I’m nothing without my coffee

Peter, still salty about that one time: then maybe you shouldn’t have it.