the heart i want to solve

a doujinshi by merci!

Bakugou: pft. What, are you gay for me or something?

Person A: I love you so much

Person B: Aww how much?

Person A, looking into the distance: So much that I’ll set myself on fire, only to portray my undying love for y-

Person A, clinging to Person B’s arm: Boats are cars without wheels, that float on water? right?

Person B, hissing in pain: Sometimes I want to argue with you. This is not one of those times. Please go disturb Person C. Please.

my life would suck without you.
by bigeggs

In a world where Quirks do not exist,
Katsuki is a piano prodigy, sort of.
His grandma started making him play at a young age, since his mother refused.
Kirishima is a science nerd, and wants to be a nurse.
Katsuki is quite confused a lot of the times, and has Izuku figure out his feelings for him, since he doesn’t know how they work, and Izuku is studying to do just that; Psychology.
Basically, this is just Kiribaku fluff,,,,expect multiple chapters :-)

we can do both

My first bnha fic is up!

Kirishima watched Bakugou scowl up at the sky in pure disgust as rain began to trickle down. The water was like little crystals dropping down, only to shatter as they hit the ground. Kirishima couldn’t help but find the scene in front of him pleasing. Despite Bakugou’s deathly look, it looked like it came from somewhere out of a dream. As the water softly hit the angry blonde’s skin (which was apparently punishable by death) the droplets easily evaporated into steam. The watery mist rose above, casting an otherworldly look to the blonde.

Suddenly, an idea pops up in Kirishima’s head.

Kirishima watches too many rom coms, and gets a “great” idea. Bakugou is doneTM.

have this third-year kiribaku drabble my brain spawned at two in the morning! i didn’t think it was long enough for ao3 but felt the need to write about bkg getting cute and cuddly when drunk

eijirou and katsuki have been dating for somewhere around three months. it’s great. they’re great. only, there’s one little thing: no one knows.

they hadn’t meant to keep it a secret, but eijirou saw how uncomfortable his boyfriend got when their friends teased him about eijirou being his favourite, or how tense he’d get when people made a big deal about him turning “soft”. so they kept the affection to behind closed doors. and, yeah, maybe sometimes eijirou’s a little bummed he can’t show his boyfriend to the world, but the special smiles he gets from the blonde when they’re alone make him happy enough that he doesn’t care who sees or doesn’t. katsuki’s a private person by nature, anyway.

(except, apparently, when drunk.)

katsuki’s cheeks are flushed a lovely shade of red, eyes bright and hair mussed messily as he buries his nose in the junction between eijirou’s shoulder and neck. it’s cute - adorable, if he’s being honest. eijirou rarely gets to see his boyfriend like this, so openly affectionate and cuddly. it makes his heart skip, and a fond smile tugs at his lips.

but there’s one problem.

they’re not in one of their bedrooms this time, or in the common kitchen in the early hours of the morning when no one else is awake. the problem is that they’re not alone. it’s eight at night, and they’ve just come back from dinner at katsuki’s house, and they are surrounded by their gaping, silent classmates. and katsuki? katsuki is piss-drunk.

he can’t even remember how it started. katsuki’s mother had offered them wine at dinner, cracking a joke about how they were now of legal age and could finally “live a little”. katsuki had refused, obviously, too virtuous to engage in drinking alcohol. well, until his mother had gotten a mischievous edge to her smile as she muttered under her breath about him being afraid, and suddenly his virtues went out the window. he’d downed the glass in one, and then poured himself another and downed that too, with an expression torn between disgust and determination.

and then… and then. he doesn’t even know. now they’re here, and eijirou is suffering.

“ei,” katsuki mumbles into his collarbone as eijirou half-carries him into the common room. uraraka, deku, iida and todoroki are sitting at the couches, and watch with wide eyes at the interaction.

todoroki blinks at the two of them. “he’s being extraordinarily touchy.” he muses.

as if to prove his point, katsuki nuzzles further into eijirou’s chest, burying his face in the red-head’s jacket.

kaminari, sero and ashido shuffle in from the shared kitchen, chattering happily.

they freeze. kaminari cuts himself off at the sight, eyes growing wide.

“where’s my phone.” he breathes, hands digging into his pockets searchingly without moving his eyes off the pair.

katsuki looks up, resting his cheek on his boyfriend’s chest and giving him a dopey grin.

eijirou, despite his valiant efforts, melts a little bit at the sight. fighting to keep the blush off his own face, he clears his throat and looks away quickly.

and- ah, yes, literally everyone heard. their jaws are dropped now, staring at the two of them like they’ve just committed a murder. even todoroki’s mouth is hanging open, expression eerily blank.

“let’s go inside, katsuki.” he mumbles, trying to drag the swaying blonde towards their dorm rooms. the blonde, however, stubbornly roots himself to the spot.

“say it back.” he demands, narrowing his eyes and locking his arms around eijirou’s bicep.

“dude,” he laughs awkwardly. “how about we have this talk inside?”

at this, katsuki’s scowl melts into a downcast pout, and he stares at eijirou with such forlorn eyes that ashido and uraraka unconsciously coo from their different spots in the room.

“y'don’t wanna say it.” he says distressedly, grip loosening, and fuck, is he tearing up?

katsuki blinks at him expectantly, eyes still shimmering slightly with unshed tears, and eijirou sighs, feeling his heart clench at the sight.

“i love you, babe, you know that.” he raises a hand to brush away the wetness at katsuki’s eyes, and the blonde’s sad frown dissolves, radiant smile returning again and eyes turning to crescents. eijirou absently considers getting him drunk more often, just to see him smile like this. he’s so pretty, always pretty, but he looks downright angelic when beaming at eijirou like this, it should be illegal.

“mwah.” katsuki says happily, pressing a loud and dramatic kiss to eijirou’s nose, and promptly collapses into his chest, loose arms wrapping around his neck.

eijirou blinks, back of his neck burning and heart still thumping at the utterly adorable display.

“um.” he says stiltedly, trying to rearrange his softly murmuring and very much drunk boyfriend in his arms.

“that was so cute.” uraraka breathes, eyes shiny. “why was that cute? am i going insane, or did i just find bakugou cute?”

“me too.” he says hollowly. “something is wrong with us.”

“i should go.” he says uselessly, edging away from them.

“i think my heart just skipped a beat.” sero mutters to uraraka and todoroki, looking vaguely terrified at the prospect. “you guys aren’t alone.”

deku has been concerningly silent throughout the ordeal, and is filming the entire thing, tears streaming down his face freely.

hagakure, who has seemingly materialised out of nowhere, is jumping up and down energetically.

“the smile!” she says hysterically. “i didn’t know he could do that! bakugou is so pretty when he smiles!”

amongst all the chaos, eijirou bundles his boneless boyfriend into his arms and slips out of the common room, into katsuki’s dorm.

well, that was certainly one way to do it.

#bnha, #bakugou katsuki, #kirishima eijirou, #kiribaku, #krbk, #bakugou is totally a clingy drunk holy shit, #this was a drabble that got out of hand, #kiribaku fluff
42 notes · See All
bnha-cultAnswer
Kiribakuuuuu

#bakushima, #kiribaku, #Kirishima Eijirou, #katsuki bakugou, #bnha, #boku no hero academia, #mha, #my hero academia, #fanart, #uhhh fuck me up, #my art, #this is the audio to my favorite tik Tok and probably my favorite sound recording of alltime, #I promise I will someday draw a more serious version of this
163 notes · See All
ao3feed-hitoshi-shinsouText

Deku is the Name of an Author!
by TortieMom

Izuku Midoriya never expected his writing to take him anywhere. Though he dreamed of being an author, it was always just that–a dream. Even applying to the Universal Arts Academy felt like a wild goose-chase, until his favorite author offered words of encouragement.
However, getting into UA is just the first step toward becoming a published author. Midoriya needs a story to get him through the creative writing program, and thanks to his friend-turned-bully-turned-actor, he may have found the plot he needs…
He just has to make sure Bakugou never, ever, finds out about it.

He knows that never in a million years will Bakugou “avoid combat“ and/or “avoid acting independently“. That’s the literal polar opposite of Bakugou’s personality.

=meanwhile, Bakugou attempts to run off on his own to fight, while Todoroki hurries behind, dragging a random class 1-B student and trying to protect Bakugou from doing something stupid and getting himself killed or kidnapped=

I’ve been planning to draw this for so long, its finally happened! :)

#bnha, #boku no academia, #my hero academia, #kiribaku, #tododeku, #serokami, #those last two are platonic though, #idk what to tag this as really, #mha
71 notes · See All
emo-garbage-ratText

#kiribaku, #bakushima, #im bored please help me, #and dont just like this you cowards, #come forward with your wants and i shall oblige, #seriously guys give me something to draw my creativity only goes so far
5 notes · See All
123beepbooplettuce321Text

I’m writing some KiriBaku One-shot’s on Ao3, and I’m gonna be posting some image references on my tumblr for some of the chapters.

Ring Kirishima got for Bakugou

Ring Bakugou got for Kirishima

I had an epiphany last night 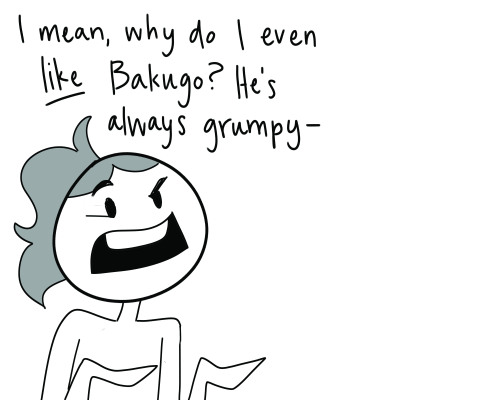 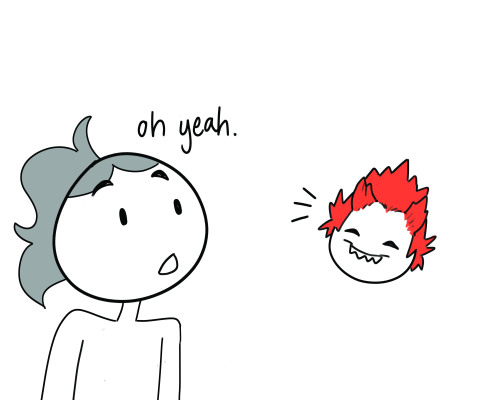 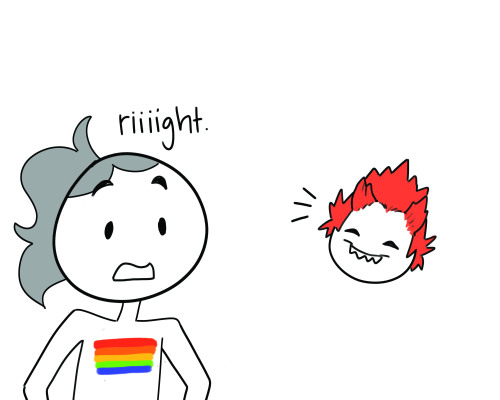 #as a kiri kin i can testify that i love bakugo, #bnha bakugo katsuki, #kiribaku, #kirishima, #bnha bakugou
219 notes · See All
ao3feed-bakusquadText

Protective
by Let Me Sleep2k20

The shriek could be heard all the way down the hallway. The five students’ heads snapped up at the sound.
Bakugou was the first to rise, wrenching the door open just in time to catch a purple-headed figure streaking past.
Mineta squealed as Bakugou snatched him up by his hair, throwing him into the circle of students who were on their feet by now.
Sero lashed out with his tape, catching Mineta by the leg as Kirishima and Bakugou ran out of the room, in the direction where the scream came from. Kirishima’s face constricted with worry as they sprinted past the boy’s dorms.
“It sounded like-”
“I know.”
Bakugou came to an abrupt halt, staggering a bit as Kirishima ran into him. Before he could question the sudden stop, Bakugou was banging on the door in front of him.
The door was almost immediately opened by a very ruffled looking Yaoyorozu. She made eye contact with Bakugou, who nodded.
And then they were moving again, sprinting toward Jirou’s room.