I love it when his barefaced with his sunkissed skin with his glasses on. 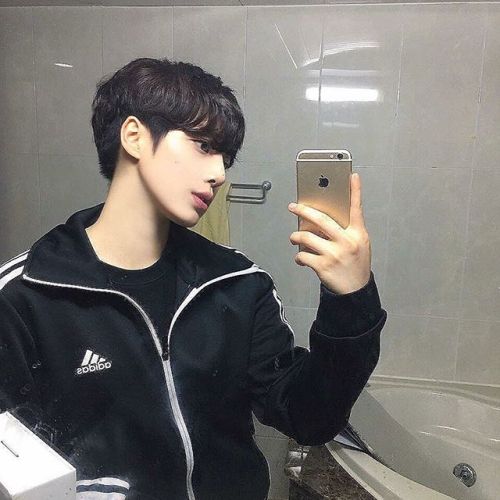 inspired in “everytime” by Ariana Grande

And again, in that dormitory next to the college, Minho and Jisung argued…

-I DON’T WANT TO KNOW!!! You are my boyfriend and I am your boyfriend, we are not in an open relationship!!

Minho remained silent for long seconds until he opened the dormitory door, before leaving he looked into Jisung’s eyes

Minho was sniffling tears and then he ran down the hall while leaving a paralyzed Jisung in the room realizing that he made the biggest mistake of his life, of all the times they argued, Minho never left the room. He just limited himself to lying down and crying clinging to a teddy bear offered by Jisung… Jisung did the same, this time really blaming himself, until he fell asleep.

Minho was now on the roof of the building, which was basically a patio where the students who lived there would gather to party, chat, relax… He took out his cell phone and just stared at the lock screen, it was a photo of him with Jisung hugging him in the college dance hall. A tear fell on the glass… Before leaving that room, Minho mentally decided that the relationship with Jisung would end but hey… The relationship of the two was already 3 years old, Jisung is very lonely and has no friends, only Minho. Jisung just limits himself to going to classes, attending Minho’s dance classes, giving all his love to him and living in the dorm room, meanwhile, Minho has lots of friends and is always happy every time he sees Jisung coming in dance class just to watch his boyfriend with eyes that only Jisung has.

-God, if you happen to exist I wanted to know what strength you have in me… I can’t end this beautiful story I have with Jisung, no matter how far I go, every time I go back to him. He needs me and I need him, I fucking love him!

So decided, Minho goes down the stairs and runs to his room being careful not to wake up other schoolmates who would already be sleeping by that time

Arriving there, he notices that the door is open and then walks in carefully so as not to wake Jisung. It hurt a little to look at him, the biggest one had actually cried, Minho noticed this because Jisung had the habit of getting hot when he cries so he realized that his jeans and sweatshirt were in another corner of his bed. Minho wanted to sleep with Jisung and not in the top bunk bed they shared, he wanted to keep Jisung warm at night. He took his bath, put on his kitten pajamas and again, carefully lay down beside Jisung with his head on his bare chest. He was staring at the biggest sleeping… how handsome he was

Gradually, Jisung fidgeted in bed until he woke up and saw Minho staring at him. Jisung made a sad expression and Minho smiled slightly

-Han, you don’t need to apologize, we have to resolve your “jealousies”… if you thought I left the room to abandon you, you are completely wrong, I love you and I would never leave you- then Minho puts himself on top of Jisung and pulls him in for a soft, lingering kiss

That was not enough, so Jisung tried to enter Minho’s mouth with his tongue, it was accepted and then they started a hot tongue kiss.

And again Jisung took action and put his hands on the boyfriend’s ass that was on an erection already in need.

They couldn’t take it anymore. Both took off their spare clothes and, still in the same position as before, Minho faces Jisung…

-Please love, fuck me with everything!

Jisung smiled and nodded, then still staring at the little one over him, he searched with his member for the pink Minho entrance. When he finally found her, he entered with everything!

-Agh, fuck, it’s so big!- Minho moaned softly but in such a good way that made Jisung do the same.

And then Han started movements not so fast or so slow, he wanted to give pleasure to his boyfriend and by the way he moaned that speed was just perfect…

After a few minutes with the same movements and a mess of moans, Jisung manifests himself:

-Please come inside me ooooaaahhh!!

Jisung obeyed Minho’s desire, increased his movements and in the last deep thrust he cumed several jets of sperm. Now the room was a mess of moans.

The sex is not over yet, after they regained their breath, Jisung inverted their positions. He started by sucking on Minho’s nipples, who were breathing heavily, he already knew what Han was going to do. Jisung went down a little and placed kisses on Minho’s belly that made the other smile and then went down a little more and entered Minho’s dick in his mouth, all at once.

Jisung removed his boyfriend’s member from his mouth and quickly started a tongue kiss this time much hotter sharing with Minho all the sperm he had in Jisung’s mouth, and they were kissing for long minutes.

-I really apologize, I crossed the line a few hours ago… I didn’t want to say that to you. It’s just that, I don’t have friends and I’m not used to the kind of gesture that Hyunjin makes with you, but with someone other than you… You are the only one who loves me and I don’t want you to leave me. I love you very much

-Oppa, I will never abandon you… I may have Hyunjin and a lot of friends but they are not worth what you are worth. I can’t stand a day without you and even if I tried to leave you, which would be impossible, God will continue to bring me to you every time. Please don’t say anything else… I can’t live without you

-I love you…- Minho giggles

Hi people! Sorry for my disappearance, I am in a complicated phase of my life and every day is a struggle to get back to being like before.

This quarantine has been horrible and has taken me many things, but every day I am making an effort to return to being the person I was.

See you soon in the next smut! (I don’t know what’s going on with the last gif, it keeps flashing … I think I did something wrong but anyway it doesn’t matter)