N/A: Not sure if I´ll continue with this au- I have some concerns regards Tus Tsu Kurt- but a fic from Meg Harmmerman sort give me a small inspiration to make this chapter- Remember when Kitty was being mocked by Logan and Kurt? I´d not know the canon and don´t care for that Bitch.

Elizabeth Braddock is helping Doug with the lunches, or how she likes to call, scones- Elizabeth Braddock is ruthless as she can be kinder and is a measure so well balanced that many men have the strange impulse to view her as unbalanced- and while using telekinesis to cut a piece of bread (smiling happily at Doug clear innocence at her powers) Kitty watches the scene amused.

a maximoff-wagner family commission for lisa 💖💖💖 i adore drawing these cuties…. 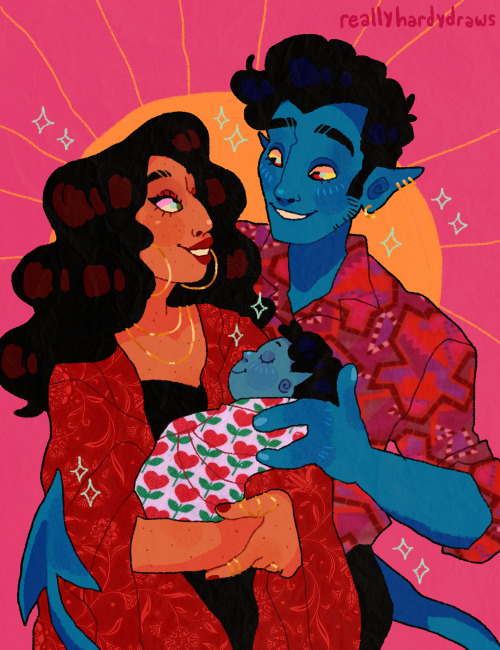 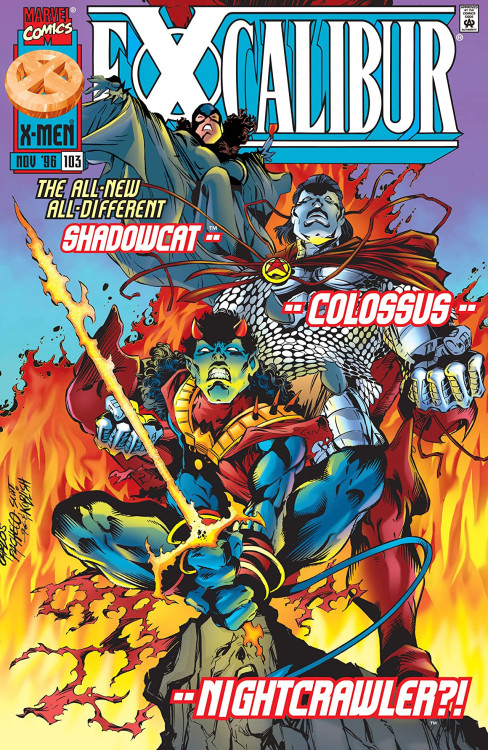 Scott, with a slit in one of his eyebrows: Stop liking my posts, you dog.

Logan: I’m sorry my fat ass thumb is in the way of seeing what’s on my screen.

Kurt, in full Adidas: Scott, stop trying to be an eshay, aye?

Alex: Kurt, you look like the definition of Shut The Fuck Up.

Alex: Shoot Scott on site. Make it snappy as well. 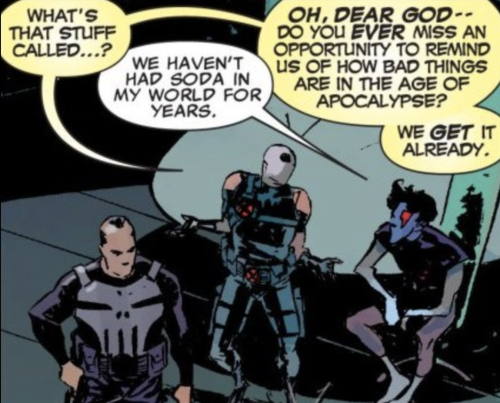 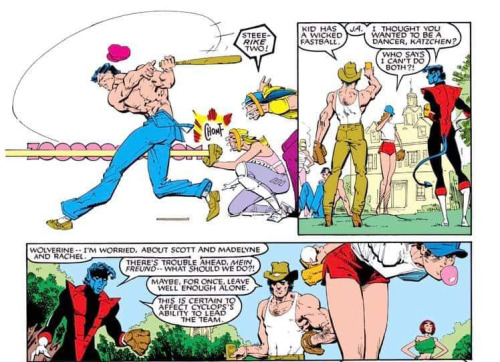 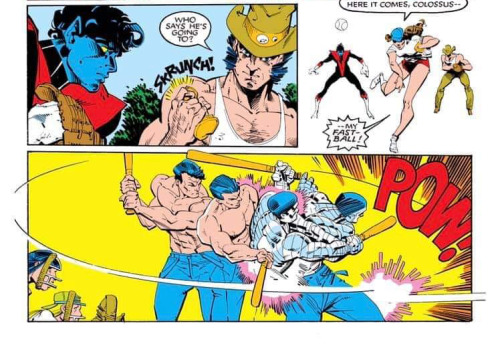 The club was always slower on weekdays. But he supposed that was to be expected. People had work and actually took their jobs seriously. It just meant that Lucifer could flit around to the patrons more easily, mingling and giving them the pleasure of his attention. Perhaps he’d slip away early and see if he could entice Billy into coming over. Normally, that wasn’t particularly difficult.

The blue fellow at the bar caught Lucifer’s attention both because they didn’t normally have such obvious mutants at Opulence–not that Lucifer cared–but more because of the feeling he got from him. This was a demon. Or… moreover… he had a presence that Lucifer didn’t want to recognize, but he did. So perhaps not a mutant at all. On edge, Lucifer forced himself into some semblance of calm before making his way to the bar. “What are you drinking?” He asked as he stepped behind it, allowing himself to wordlessly relieve the bartender as he slipped into the role with all the suspicion he could muster hidden behind an easy facade.

nightcrawler is the xmens furry for gay people and beast is their furry for straight people. have a good night <3 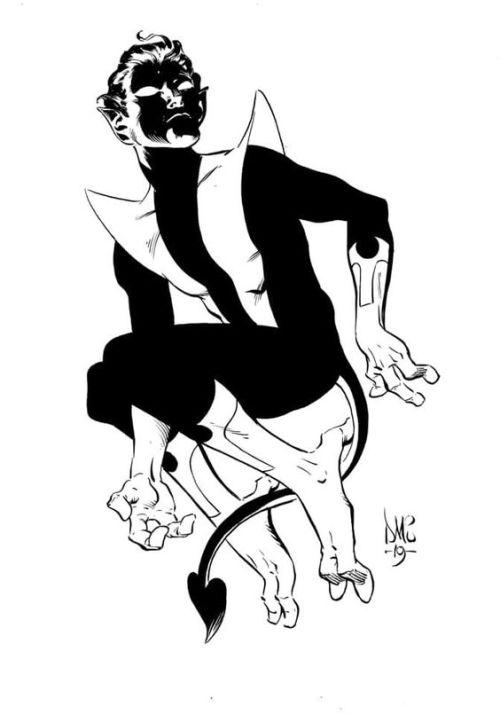 Summary: Kurt gets the soft parent moment he never had in apocalypse

Kurt is still unconscious when they make it back; he’s half awake as they repair the school; Hank keeps an annoying close eye on him and narrows his eyes when Kurt sways.
“Sit.” Hank almost shoves him down into the chair. Kurt looks like he wants to complain but he obeys sighing when he sits and looking confused when a glass of water is pushed forward.
“Once the kitchen is done we’ll get food.” Hank assures and Kurt nods, closing his eyes for a moment.

“He’s exhausted; he had to move all of us to a location he’d never seen; he’ll be fine with more rest and decent food; I can’t imagine he was getting decent meals before all of this.”
“Thank you for keeping an eye on him; it means a lot Hank.”
“Anything for you Raven.” Kurt doesn’t respond to whatever he’s hearing curling into what he assumes in a couch with how soft it is.

He wakes up to see Mystique sitting across reading a book and he watches her, tail flickering back and forth.
“Vhat are you reading?” The words feel heavy in his mouth and he sits up slowly; she closes her book holding a glass of water out which he carefully sips from.
“Charles’ thesis; it always puts me to sleep.”
“Having trouble sleeping?” She nods and he frowns tail lashing slightly before it curls around his arm; his fingers are rubbing the tip of it; thumb nervously making circles and Mystique smiles.
“Are you okay?”
“I thought I wasn’t going to make it; that everyone was going to… it would be my fault…” He tries not to sniffle and fails Mystique frowning.
“Listen Kurt; we’re trying to help everyone; to the best we can. Those of us with abilities; with ways to help beyond the normal; we’re granted that gift to help; but all we can do is try to use it.”
“I tried.” He nods and she smiles nodding with him.

“You did; and you did so well; you were able to save us. You’re a hero.”
“Hero’s don’t look like me.” He mumbles and feels the couch dip when she sits; he looks up into a mirror of himself and smiles a little.
“Better you than me.” She says in his voice before returning to her blue form.
“They’re scales.” His fingers brush her shoulder; the scales that cover her body and she nods.
“Yours are scars. Was it by choice?” He nods.
“It made me look better; for the circus; the performances; the more monstrous I looked it was better.” She doesn’t press further and he offers no explanation.
“The circus? Were your parent’s part of that?”
“No; they abandoned me; I’ve always looked like this; never been able to hide.”
“You look exhausted still; rest more.” She offers as a response and he nods as she stands from the couch but feels his tail curling around her wrist; he doesn’t look her in the eyes.
“Can you stay… I can’t sleep…”

“I’ll read you Charles’ thesis.” She chuckles a little and lets him lay down grabbing the book back over and Kurt can now see it’s actually a massive file that’s been bound together.
“ As stated in the previous excerpt it’s be assumed that the only possibility of evolution exists in the nurture part of nurture vs nature theory. That the nature part has become unchangeable when we grew into the Homo Sapiens as we define our humanity in a containable and referential way. In order to-” Kurt tries to listen but Mystique was right; it does put you right to sleep and he falls back into the same emptiness as when he teleports.

“You should say something.” Charles nods to Kurt asleep on the couch and Mystique looks unimpressed for a moment.
“He won’t be upset.”
“You don’t know that.”
“And neither do you. Hank said he’ll be a little out of it when he wakes for the next few days, he might not remember.” He responds and leaves them, Mystique is about to do the same; to return to her room but she watches Kurt’s tail lash around and his brow furrow before he twists on the couch. She stands, placing Charles’ thesis on the table and standing pulling the throw up over Kurt’s shoulders.
“Vait;” His hand grips her wrist and she stumbles.

“Sorry, sorry.” He pulls back and curls under the blanket
“Schatz, shh; it’s okay liebling; shhhh.” Kurt seems to wake up more, face still hidden.
“Sorry; you speak german?”
“A bit; I spent some time there.”
“Have you ever seen the Munich Circus?”
“I have once; it was before you were born I’m sure.” Neither of them comment that she’s sat back down.

“Go to sleep. Rest more; you’ve done so much; everyone is proud of you, take your rest.” Kurt seems like he wants to say something else; to find some reason to keep her there but he just rolls over and buries his face into the couch.
“Mmhm; the ringmaster told me they had another mutant before me; well they guessed; said they were like me. I’ve never met a teleporter before. I wish I knew them.” He’s half asleep still and Mystique wonders if Hank had given him some sort of sedative. She takes the chance when he doesn’t say anything else.

“Not a teleporter; blue like you.”
“I’ve never met anyone like me.” He amends and Mystique shifts into his form.
“Yes you have.” She returns to her normal form and she leans over kissing his forehead.
“Bitte schön; schlaf liebling; schlaf.”

I’m watching X-Men Evolution and I can’t stop giggling. This literally defines my childhood. It makes me happy just like when I watch MCU movies