A quick 16 minute painting for the 30 day art challenge I’m participating in, of the beloved lwj stubbornly reaching out for someone who can’t answer 😅

ur ride is ready 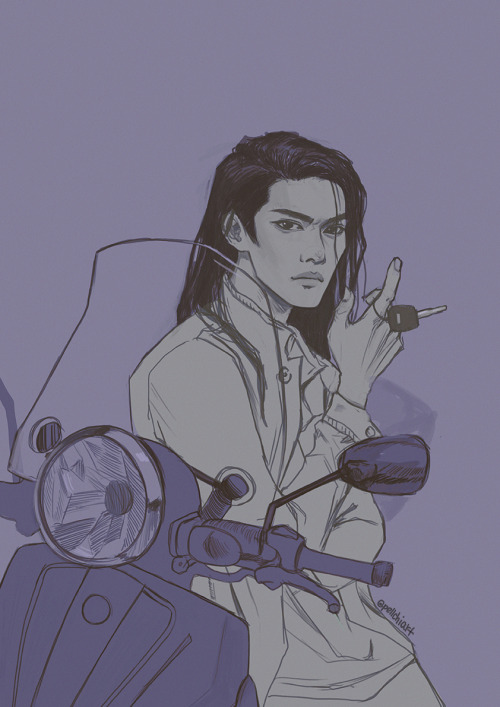 to them (which is unsurprising because he didn’t care about them when he already knew the Wen sibs saved his life). Why are we even supposed to feel sympathetic towards someone who realizes he hurt people, even when maybe not having the full information, but then does nothing else about it than blame others? 2/2

It’s like… “Oh, he feels so guilty, but he’s never going to attempt to fix what he’s done or make amends or even apologize or thank WWX for what he’s done for him!” There’s always a lot of “tell don’t show” with the meta and fics where the writer insists JC feels guilty for what he did; and it’s the worst type of “tell don’t show”, the type where the showing outright contradicts the telling and the narrative never so much as acknowledges the discrepancy. And it’s like… you can feel sympathy for a character who’s done horrific things, sure. I feel bad for JGY, for instance, because he genuinely felt he had no other way given the circumstances. But the novel makes it so clear that JC did the things he did because he wanted to when there were plenty of alternatives (even if the best he could manage was not actively taking part in the massacre it would be something) and he never shows a shred of remorse for any of it (with the closest he gets to remorse being blaming everyone else for his decisions), so… yeah, he gets zero sympathy from me.

I don’t know. It can be hard to figure out what an author intended. An argument can very much be made both ways.

“Somewhere along the line, you must have thought this was a good idea,” the emperor said. His voice was low and deep, dangerous.

Jiang Cheng kept his eyes fixed on the wall in front of him – the harem wall, where men were most decidedly not allowed to go – and said nothing. There wasn’t any point. No matter how he’d gotten here, he was here, violating ancient rules for which the punishment was clear: castration at best, execution at worst.

His sole comfort was that at least he didn’t have any family to be executed alongside him for his crime.

After all, women married out, which meant Jiang Yanli was no longer part of his family, and Wei Wuxian – well.

Wei Wuxian had made his choices long ago.

#mdzs, #if barely, #jiang cheng, #nie mingjue, #jin guangyao, #my fic, #my fics, #for some reason this gives me the feel of a harelquin romance so I wrote it accordingly, #Anonymous
32 notes · See All
crossdressingdeathAnswer

Oh yeah, definitely. WWX did refuse to go to the Cloud Recesses before JC opened his mouth because he thought LWJ was just like his uncle and hated people like WWX, but it was very much JC who started insisting LWJ had some sort of bad motive or wanted to denounce WWX even though LWJ hadn’t really done anything to suggest that beyond maybe questioning what exactly WWX had done. If nothing else, I’m convinced that JC pushing that point and keeping LWJ from explaining himself made WWX’s belief that LWJ wanted to lock him up worse.

‘lan xichen is constantly flirting’ is a common misconception. lan xichen is just super nice and sweet to everybody by default because he is Like That and actually has no idea how to express actual romantic intentions on the rare occasion that he has them

#mdzs, #this is just a headcanon it's not like. properly canon, #although i could justify it with analysis of his character
4 notes · See All
untamedxiaowangPhoto 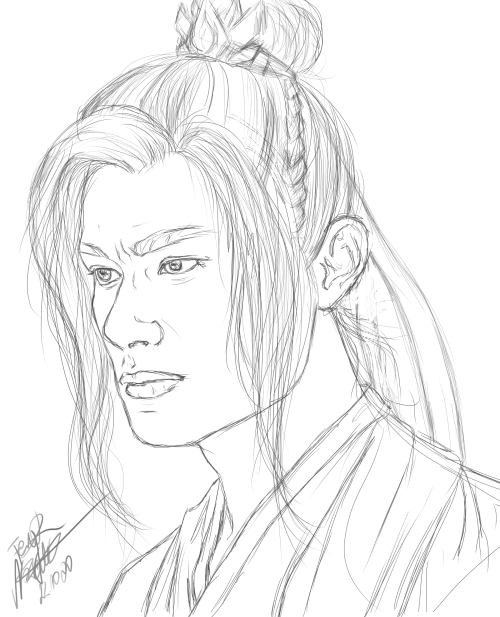 Nico Di Angelo gets a new brother, and Lan Zhan may or may not be in love with him. Lan Huan is nice enough to not say it out loud. 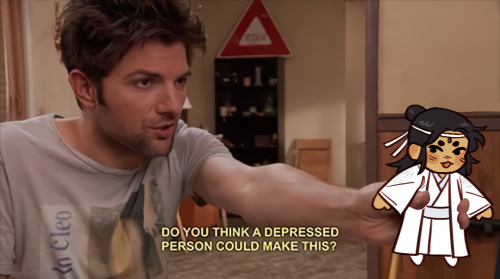 the alternate timeline is now titled “Go Away Closer” (after a piece by This Will Destroy You) and has been tagged accordingly. As I usually do, I will be writing bits of it on tumblr based on requests or whenever the whim strikes me, and when I think I have enough of this cobbled together, I’ll clean it up and start posting to AO3.

#mdzs, #jiang cheng, #nie huaisang, #wei wuxian, #jiang yanli, #nie mingjue, #and whoever else i add, #ships? i have no idea yet, #blythe this is all your fault
1 notes · See All
theangelmojoLink
just remember darling, all the while - Chapter 1 - TheWanderingHeart - 魔道祖师 - 墨香铜臭 | Módào Zǔshī - Mòxiāng Tóngxiù [Archive of Our Own]https://archiveofourown.org/works/27135521/chapters/66265100

HP!AU continuation! XiCheng prepare for a short practice trip/expedition, and during this experience flashbacks to their schooldays~

Tah-dah! A couple of days later than I meant it to be because real life made a series of sudden demands on my time and energy =_=

Anyway, I know a bunch of people were excited to see Lan Qiren’s reaction to everything, so, here we are! It was actually very difficult to get into his head and do him justice as a complex character, so I think I ended up writing him a bit… softer/more flexible than he really should’ve been at this point? (I do actually like him as a character, honestly, I just… find that sort of lawful/rigid/conservative/traditionalist additude… very alien, I guess?

yknow I’ve been thinking about that mind-control trick that wwx uses to make lwj get drunk at gusu summer camp and hey, wouldn’t it have been useful during the sunshot campaign, and I conclude that the reason why wwx didn’t use it is because 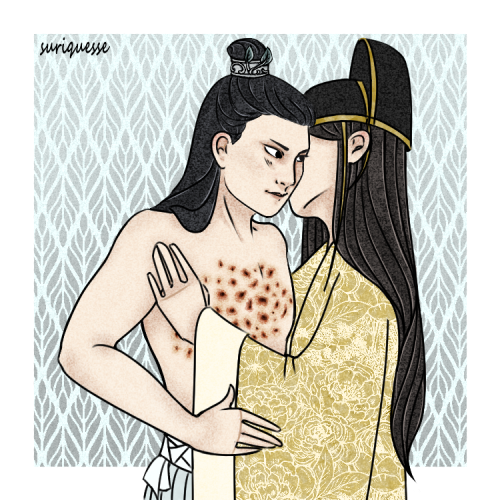 one of the grey areas in mdzs that I don’t think we discuss often is that lan xichen and meng yao are together responsible for a tremendous breach of trust and creation of trauma towards nie mingjue for which one of them (lxc) seems to be forgiven and the other (my/jgy) isnt, but like, even the fact that lxc was forgiven is truly a matter of how long lasting that friendship was.

lan xichen is one of nie mingjue’s closest friends AND is working under nie mingjue during his capacity as the apparent general of the Sunshot Campaign and he never once discloses the identity of the spy he’s getting his information from during the war proper, even when asked. this directly results in the fact that when nie mingjue is captured late in the war, forced to watch his men be murdered, taunted with his father’s murder and with being murdered in the same grisly fashion as his father was, and beaten, he’s enduring all of this without any idea of that he’s supposed to have help in this room with him, that this is anything less than what it seems - pre-emptive torture by qishan’s head torturer (because that seems to be meng yao’s role, being the man who invented many of wen ruohan’s favorite tools of torture)

only AFTER wen ruohan is dead and AFTER meng yao has done all of this is it revealed to nie mingjue that meng yao was a spy and its treated in both canon and fanon as a gotcha, as if nie mingjue should just not be angry anymore, not even an hour after experiencing all of this, because look! RETROACTIVELY you know this man wasn’t going to kill YOU. you RETROACTIVELY know that you were not in real danger from the man who murdered your subordinates in front of you

this is, in my firm opinion, probably the worst things Lan Xichen ever did to Nie Mingjue, especially when the sole explanation for it all comes down to “i did not trust your professionalism as the general who is leading and coordinating our forces to be great enough that you would put the war first and over look that the spy sending us (seemingly*) reliable information is someone who personally betrayed you** and who you witnessed committing murder, but now that he’s hurt and traumatized let me use that as a get (him) out of jail free card”

maybe there wasn’t another choice in lxc’s mind, but this is ultimately one of his huge grey areas pre-burial mounds, his participation in what is absolutely a huge betrayal, and the fact that mere hours to days later he asked nie mingjue to swear brotherhood to him and meng yao is truly something i think we as fandom should discuss more

3zun is complicated on all sides because there is some degree of tension and fucked-uppedness happening everywhere between them.

*= seemingly, because there is a justified reading of canon that nie mingjue’s capture was a deliberate ambush facilitated by meng yao and lan xichen, in that information from meng yao delivered by lan xichen says that the area they’re going to should be a soft target open for ambush and instead Wen Ruohan was waiting with extra forces, so. probably not a coincidence.

**= in the novel specifically, after beint caught in murder and asked to turn himself in, meng yao stabs himself in apparent suicide for honor. nie mingjue rushes to help him and transfers him spiritual energy and in that moment meng yao paralyzes him spiritually and stands up revealing he’d deliberately stabbed himself non-fatally, and runs away leaving nie mingjue frozen in a recent battlefield. in cql the betrayal is arguably much less personal than that