Summary: After being saved by a group of Mandalorians similar to Din, you begin to realize that your a puzzle piece that doesn’t seem to fit…

The soft babbling from the floating bassinet that follows you is like water against the fire that burns at your nerves. Looking down at the Child, you send a soft smile towards his wide eyes. How much does he understand of what is happening around him, you wonder. If he is fifty years old, he must realize the tension between you and his adoptive father. Of the situation at hand.

I wanted to work on a fic I already started but I had a new idea so I started a new fic and now I’m staring at 16 documents. Seriously. Who do guys want me to write about? It might force me to concentrate on ONE fic, so that I can finally finish something!

Hey yeah so here’s a panel from a Mando comic I’ve been working on. Part one will be posted Tuesday!

thebounty said: Hey!! I was wondering if I could ask for a request for a Mandalorian x Jedi!reader? It’s inspired by this song (Jenny- Studio Killers) which is basically about friends turned into lovers.

AN: Ah, yes, the TikTok song…I hope I did your idea justice! (I cut the rest of your request out on this official post because I didn’t want to totally spoil what happens!)

You were familiar with the carbon stink of blaster bolts and the excited tension of battle. Limited stints in combat during the Clone Wars, when you were barely old enough to be a padawan, had introduced you to the harsh adrenaline and smells of war. A gunfight in some alley on some Outer Rim world was nothing compared to what you had seen. Though, now, you knew all of what was at stake; you loved all that was at stake.

“I don’t think they’re Jedi,” Din observed as he ducked down behind the thick stone wall you were using as cover. You shot the helmeted man an incredulous look.

“Really? What gave you that idea? The fact they’re not using laser swords or that they’re shooting at us?” Din didn’t respond to your sarcasm and instead popped up above the wall to let a few bolts fly. Based on the yelps of pain, they hit their marks.

“We need to get out of here,” he said once he ducked back down. You nodded and glanced at the Child, still tucked away in his cradle. His big eyes were glued to you, as they often were in the heat of battle. Expectant, waiting for you to make your, the, move.

“Yeah, we do,” you agreed, before you pressed the button on the Child’s cradle that closed the little creature within. The last thing you wanted was more pressure.

“They have us pinned,” Din said and tipped his head back towards the wall behind you. “And there’s at least five,” the Mandalorian popped up from behind the wall again and nearly missed a blaster bolt to the head, “six up front.”

Wordlessly, Din reached around to his back and rapped his gloved knuckles against the fuel tank of his jet pack. An empty, metallic clang echoed the knocking of his hand. No fuel.

“Karabast,” you cursed as you turned your attention to the enemies firing luring shots at the relative safety of the wall. There were too many. A step beyond the stone would mean certain death. So did staying put. Direness set in, loomed like a storm cloud in your mind. You glanced back at Din and the Child’s cradle only to have a lump form in your throat.

As if on cue, the cradle covers opened and revealed the watchful eyes of the Child. He was still focused on you. As you took a moment to study him in return, you neither heard a coo of worry nor did you see flinch of fear. He was calm, eerily so; as if he knew what you were thinking, what you knew you had to do.
You moved your gaze to Din and watched as he let a few shots go towards your attackers. A stray blaster bolt from the enemy knocked against the beskar plate on his chest, right above his heart. Too close to where his armor ended and his clothing began. Too close for comfort. You couldn’t lose him.

Adrenaline, pure and vile rushed through you. Before you could move against your instincts, your hand reached out and pulled Din back down behind the stone wall. The dark visor of his helmet met your gaze. You could feel the question on his lips, despite having never seen them. You had spent enough time imagining them; how they looked and how they might feel against your own.

“Grab the kid and run on my word,” you said with a tone of seriousness to break yourself from your wonderings. “Got it?”

Din was still for a moment and you realized that your hand lingered on his arm. Warmth spread through your fingers, up your arm, and to your face. Quickly, you let go, and the Mandalorian seemed to have recovered. He nodded wordlessly and reached out towards the cradle. When the pod was tucked under his arm, you moved to face the stone wall you all were hidden behind.

saw @cryoverkiltmilk‘s gem (x) and had to do it 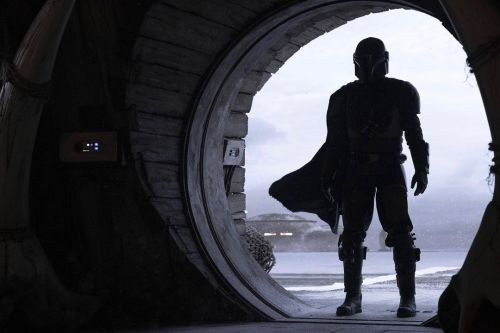 Who else is simping over these fics? 👀💕✨

Summary: The first time you slept next to the Mandalorian definitely wasn’t that comfortable. The second time would have been a lot better … if you could have fallen asleep in his embrace.

Notes: The sequel to “Touch” is here! You don’t have to read the first part necessarily but I would suggest it because some things are references you might understand better if you read both. I also decided to name this series “Tigaanur“ which is Mando’a for … touch, lol.
I hope y’all like the second part just as much! I had a lot of fun writing this, hehe.
Note 2: Again, set during season 1 but the events are drawn out over a longer period of time (but they aren’t really mentioned)
Note 3: If you like my writing … I’m taking Requests! Or if you just want to be notified when I upload something: I’ve started a taglist, too!

With a huff you turned in your makeshift bed and stared at the ceiling of the Razor Crest, your hands clasped and neatly placed on your stomach. Keeping track of the time was difficult when you were in hyperspace for more than a day, at least for you, but when spending these days unable to fall asleep, the minutes seemed to last an eternity longer. Insomnia plagued you in your hours of otherwise peaceful slumber ever since a few weeks. All those events, all those concerns to keep the Child safe and the realization that there was a bounty on your head now, kept you awake, alert even when you knew it was safe to close your eyes. Your days were a constant pattern you couldn’t escape from. Fighting, fleeing, repeat. You were aware of what you had signed up for when you joined Mando and the little one on the Razor Crest and you didn’t regret a thing. But what you hadn’t been aware of at the beginning was just how much your mind would struggle to process everything. You adapted to having to be observant and careful all the time, you just couldn’t switch it off anymore. Your body shook with energy, prepared to act if necessary at any time even when you were more than exhausted.
In the last couple of weeks you only seemed to find any sleep when your body was too exhausted to function anymore, leaving you passed out in the copilot seat more often than not. When Mando would notice you almost falling sleep beside him, he always urged you to go down in your bed. You knew he only wanted you to sleep comfortably, the copilot seat wasn’t the best alternative for your body and especially for your back. You didn’t dare to tell him that the moment you would settle down in your bed, you would be wide awake for the rest of the flight.
Sometimes sleep was within reach, so close but your mind would startle you awake before you could get a hold of it. Leaving you panicked in your bed with your heart beating relentlessly against your ribs, keeping you awake for the rest of the night. Other times your body was simply too restless for you to even feel tired, let alone fall asleep. The constant stress your body and mind were under, slowly but surely strained your nerves.

• The Mandalorian chapter 13 - Ahsoka and The Magister duel redraw

Loved the Kurosawa and Tarantino’s Kill Bill reference too much.

Din Djarin but make him ✨sparkle✨

Din Djarin has that Smart-Dumbass™ energy that I live for. Because he’s like a badass bounty hunter dude who’s like insanely competent at everything that is involved in his profession but like oblivious to things that aren’t important to him. Like yeah, he’ll kill you if he needs to and he knows over 700 ways he could do it too, but he’ll still ask the man dressed in a black cloak who just killed like 30 murder robots with his mind and his laser sword if he’s a Jedi.

Did some painting studies from The Mandalorian screenshots. That show is absurdly beautiful!

Yes, they stole a imperial shuttle. No, I will never draw it again.
*do not repost*

Based off of these guys 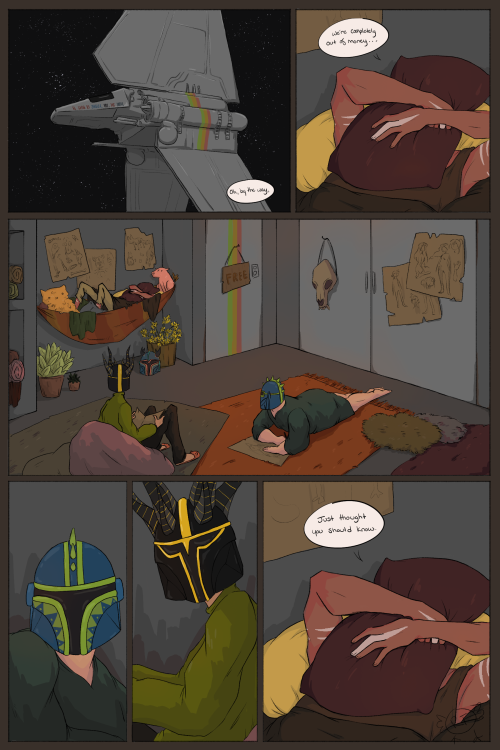 ni cabuor gar = i will protect you

this is for all of u amazing fanfic writers ♡♡

if u want to know about a specific word or phrase for ur fic just ask/submit your question and i’ll answer you!! ♡

Mandalorian: Guys, GUYS you could see his chin there!