Vancouver musician Nickolaj has released a new single called “First Place”. “First Place” is the lead single from his upcoming EP ‘Step Into The Light’ which is due for release this Summer.

“I wanted to affirm that I believe in myself and my abilities,” says Nickolaj. “‘First Place’ is ultimately a song about greatness, and by sharing this song, I strive to inspire others to pursue their definition of greatness.”

Stream/Download “First Place” here or watch the lyric video below!

Sometimes I feel like real life is the window dressing, and the music is real life. 🤷‍♂️

… Rediscovering this album. “Same Problem” is also such a great song. 😫

Huge losses on derivative trades at Geode Capital Management have forced the giant investment firm to close down its hedge-fund business.
Geode manages all of Fidelity Investments’ stock-index funds, and that operation accounts for most of the firm’s $720 billion in assets. But it has also offered an array of riskier, hedge-fund strategies to wealthy clients and institutions.

all i want is loyalty

You can usually tell a lot about a person by the type of music they listen to. Put your favorite playlist on shuffle and list the first ten songs then tag some people! No skipping!

I was tagged by @deardiary17 - thanks for the tag!

Speaking as a Fall fanatic, the best bit of this excellent Better Badges production is an interview with the band that took place straight after their first gig following the sudden departure of keyboard player Yvonne Pawlett, which Mark E Smith blames on a new boyfriend she’d met a couple of months before (although - unusually - it was radio-star-to-be Marc Riley who did most of the talking). Mick also spoke to The Ruts, as well as going to see them live at the Marquee. Their awesome singles “Babylon’s Burning” and “In A Rut” appear in the Allied Propaganda chart (apparently based on votes from readers) at #1 and #6 respectively.

An interview with The Electric Chairs ended up being largely about former frontperson Wayne/Jayne County, even though they’d already parted company (because Wayne was more interested in turning into Jayne than being in the band). Guitarist Henry Padovani also shared his disdain for his former band The Police.

Ray went to see The Clash at Notre Dame Hall (now Leicester Square Theatre) in July 1979 and came away from the gig highly unimpressed with the new material the band had previewed, which consisted of songs from the forthcoming “London Calling” album (considered by many people - myself included - to be one of the greatest albums of all time, so I wonder if he changed his mind after it was released five months later). He also attended a garden party at Rat Scabies’ parents’ house….

Vinyl reviews include recent releases by The Monochrome Set, Poison Girls, XTC, and The Molesters. The Cure and The Satellites are also featured.

There were several other issues of Allied Propaganda after this one (I also have #9, which I’ll hopefully end up posting at some point) - and just to show what a small world we live in - decades later, Mick’s son is a mate of my nephew. 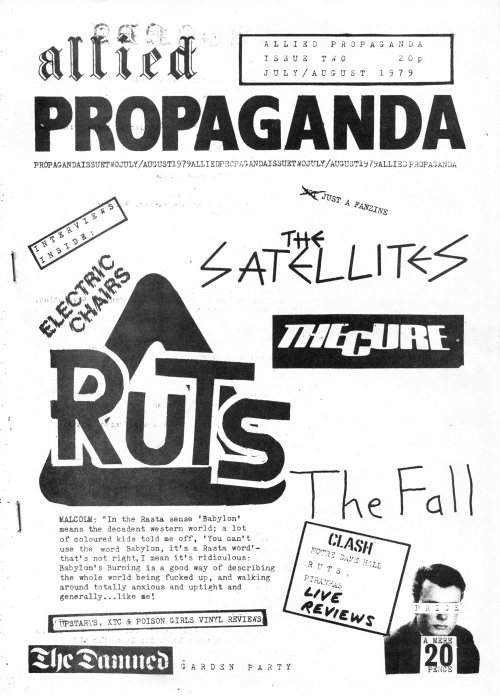 Some legends are told

Some turn to dust or to gold

But you will remember me

Remember me, for centuries