#sal speaks, #My Little Pony, #they could have done so much!!!
0 notes · See All
neondoespjmasksblogText

Minty is visiting the village and botanic garden of Portmeirion. 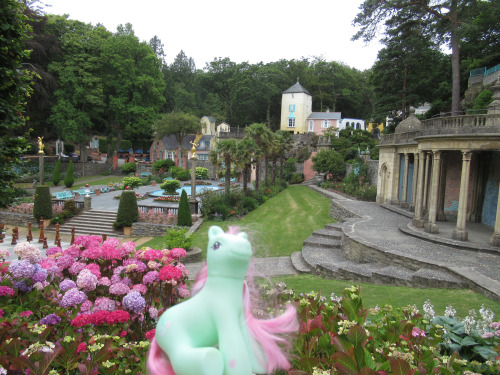 I do not recall this hole being here when we left. 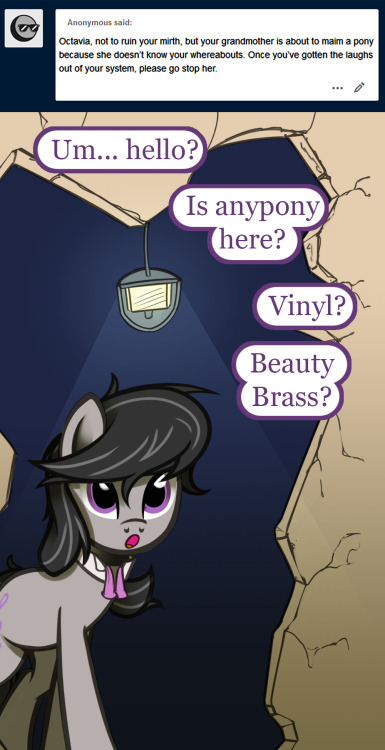 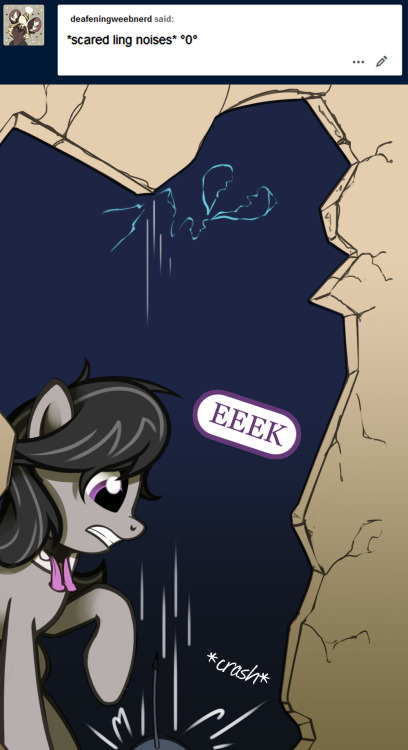 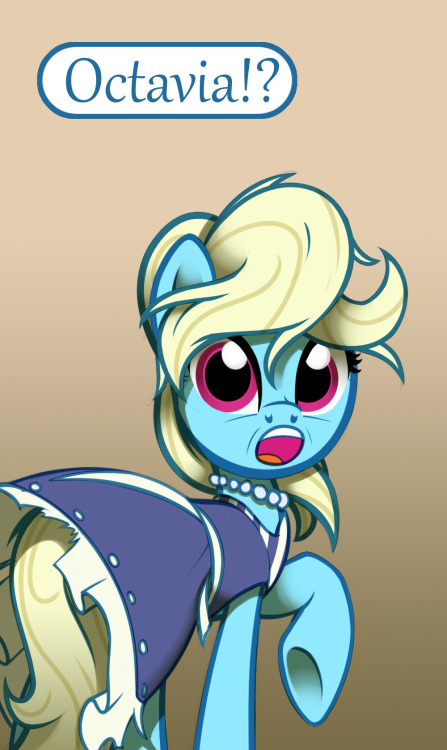 More pixel pictures! I tried draw an atmosphere artwork with Twilight Sparkle, she’s writing some words in her book (diary?). 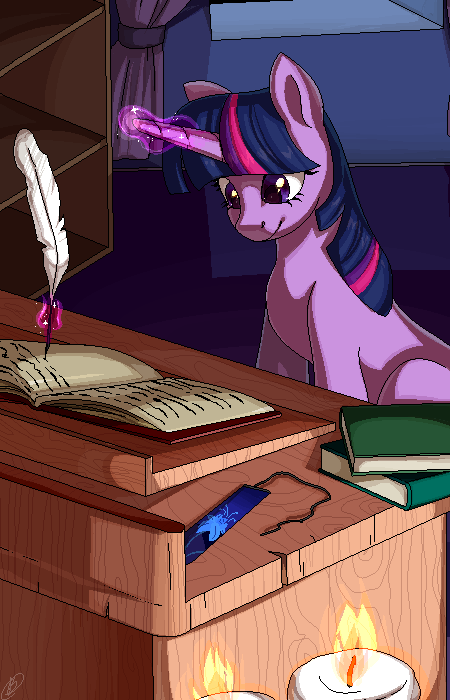 Some redesigns I did of the Mane Six heheh. :)

Applejack: Are you hurt?

Rainbow Dash: And my body.

Rainbow Dash: My pride and my body.

It’s My Little Monday!
With…Flower Fantasy Pony Flowerbelle!
Since the Flower Fantasies were so popular here in earlier posts, of course the last of the set must now appear. Flowerbelle feels like she should have been my favorite of the set (being purple with blue) but she’s a very close second. Her floral theme seems to be ‘daisy chains’ as there are a few deliberate rows of flowers along with her petals and bows. Her symbol is sort of hard to see, as it’s a pair of reddish purple hearts with 3 smaller solid hearts. Hers is more of a pattern/symbol, rather than representing ‘an item or idea’, like others. (The symbol seems to be her weakest link in design, but is still nice) Her pose seems a little shy, but her orange eyes (unusual!) are twinkling with fun thoughts or maybe a bit of flower-related mischief.
As you can easily guess, she has been re-haired by me. I got her with a nasty mullet of frizzed white hair and no tail. Of course, a cost-saving move as this whole set tends to be fairly pricey. I set her up with super long hair (As that is a style I really like) and made sure it was extra thick & luxury looking too. With all over designs and super hair she becomes extra fantasy. This is ‘fading pink’ as was the original hair so she has to be kept out of any UV at all.
She is so pretty! Grab this pony to collect her if you see her at any a reasonable price at all. I do wish they had made more of these! 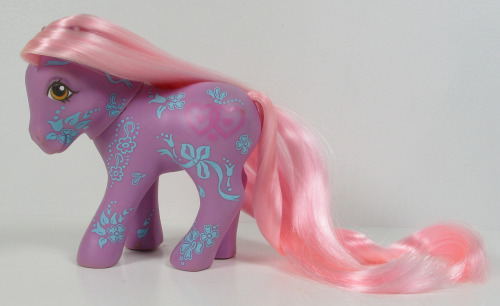 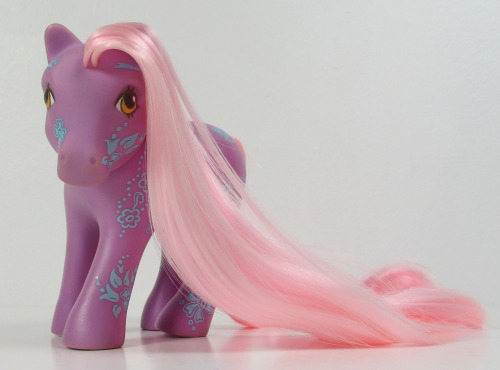 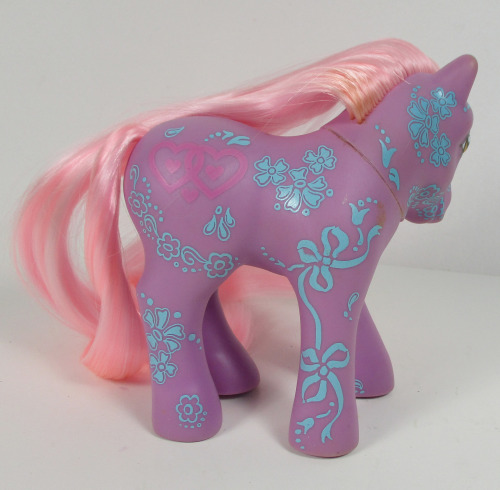 Some more fan art I’ve drawn the past couple days ^^

Been thinking about… them ♡♡♡

which of the mane six was y'all’s favourite. mine was and always will be rarity

Okay.  I just geeked out on a musical number in one of the My little Pony episodes.  There’s this village where everyone is the same; no one is better or worse than anybody else at anything and no one has any talents.

They sang this song and the structure of it really reflected this village.  The tempo was strict and every word was articulated.  The dynamics did not change within any part of it either.  In other words, it had a very basic structure.

Alrighty.  I just had to geek out on here about music. 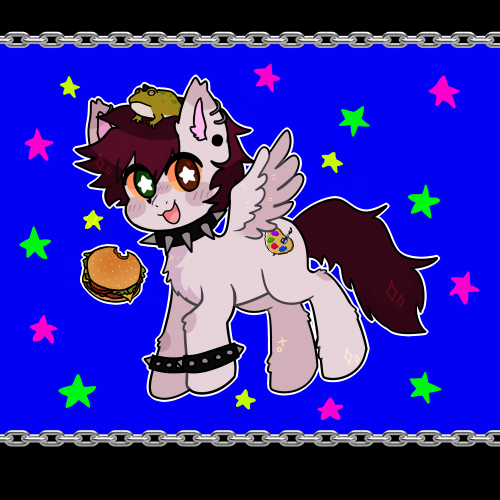 Welcome back to Card Shark, friends! I’ve been excited to cover another New Dawn card, and this one is one of my favorites in terms of humor! Look out, ROYAL CANTERLOT VOICE - it’s time to make way for the “ROYAL CHEERING VOICE!”

GO, SCHOOL OF MAGIC! Compared to its sister the ROYAL CANTERLOT VOICE, the ROYAL CHEERING VOICE costs 2 AT, 4 Blue req, and 4 Yellow req to play as opposed to 1 AT and 4 Purple req. When you play this Event during your Main Phase, you put one of your Friends into its owner’s hand, essentially bouncing it. That means if you used a card like Pharynx, Hive Patrol or Sonata Dusk, Siren’s Call to gain control of an opposing Friend, making it “yours” in the sense of the game, you could bounce that stolen Friend back to your opponent’s hand. You probably won’t want to do that to your opponent’s Friends, though: once you bounce that Friend, you (not your opponent) may pay 2 less AT to play the next Friend with that card’s name that turn. That means you could have two copies of that Friend in your hand and you could play either of those copies with the discounted price. Sure, a 2 AT discount is pretty good for any card, especially with cards like Princess Luna, Midnight that make it harder to move played Friends. But what I really love about this is that it bypasses the “card enters play” versus “play this card” requirement. In case you’re unaware, there are certain Friends that only activate an effect when you play them (such as Mistmane, Pillar of Beauty) and cards that activate an effect whenever they enter play (such as Prince Rutherford, Quick to Judge), which means they could have been in any zone or even a discard pile and forced to reenter play through a card like Interdimensional Portal or Redeeming Qualities. (Confused yet?) Luckily, with this Event, you won’t have to worry about that. There’s so many things you could repeatedly boomerang with a discount that it’s not funny. Especially not for your opponent. Here comes my saying: every AT (including the ones saved) matters!

WHERE’S THAT TEAM SPIRIT?! It’s there, I promise. Frankly… I think this card is nicely balanced. If it was Immediate, I think it’d be a bit OP, and I don’t think this would work well with Sonic Rainboom as you’d have to bounce a Hasty Friend or slam down an Under the Wire to get the full benefit of it. The 2 AT cost for a 2 AT discount is also pretty excellent as the possibility of replaying a 2 cost Friend is there. If I had to pick one downside to this, I guess… the color requirement is a tad lofty? If you’re bouncing an opposing Friend, that’s 4 each of Blue and Yellow when cards like Unsatisfactory Work exist. And you’re only getting the discount if the opposing Friend exactly matches a Friend in your hand - so, for example, you can both have Fluttershy Friends, but if your opponent has a Kind Pony and you have a Backup Vocals, you don’t get that discount on Backup Vocals. Furthermore, if you’re hitting one of your Friends, you could be taking out some of the color requirement you needed to play that Event anyway. It certainly isn’t an impossible color req to reach, though, especially if you use the popular Blue/Yellow Pegasus Aggro deck archetype. (It just so happens that all my suggestions could fit into a Blue/Yellow Pegasus Aggro deck!) Other than those factors, though, I’d certainly make room for this in a Blue/Yellow deck, even if it might see some sideboarding sometimes. If you don’t use this card for the discount, use it for the fact that Celestia can apparently unhinge her jaw like a snake.

Here’s a few more cards ready to ROCK AND ROLL:

*Mage Meadowbrook, Pillar of Healing. In case you haven’t guessed yet, this is essentially going to be a list of excellent Friends to bounce with this thing. Since there’s so many, I’m gonna keep it to Yellow and Blue Friends for this Shark. Mage Meadowbrook is at the very top of this list because… look at her! She dismisses each opposing Resource and Troublemaker when she hits the field! Now imagine being able to do that for 1 AT. Not much more I can say here - this combo is that scary.

*Rainbow Dash, Fierce Loyalty. This card has two things going for it: first, when it is played, you get to search your deck for a Dilemma and immediately put it into play. There’s no other card that does something like that, and it could turn a game on its head depending on the Dilemma you retrieve. But if you meet that Blue Unity 15… well, then you get to move one of your characters to each Problem in play! (That means if you have, say, three Problems in play, two regular and one Dilemma, and you have three characters in play, you can move each of those characters to one Problem.) Ideally, boomeranging Dashie would allow you to search your deck for a free Dilemma twice at the minimum - if you can’t activate that Unity 15, I still think it’s worth using.

*Sanctuary Patients, Get Well Soon. Unlike the previous Friends on this list, this Friend does something when it leaves play instead of when it enters play or is played. When the Sanctuary Patients leave play, you get to put three 1-power Yellow Critter Friend Tokens into play. You’re essentially trading 4 power for at least 3 - of course, with a discount like this, you’ll get a minimum of 7 Yellow power back! A handful of Critters creates more opportunities for play strategies (including but not limited to Thorax Mane, Shoeshine, Critter Choir, Professor of Kindness, Attention Seeking Behavior, and way more), and 4 AT for 7 power isn’t the worst tradeoff. If you go the Critter route, just make sure you have backup for that Blue color req - in the current Core format, I can only name one Blue Critter (Parasprite, Hungry For More).

*Fluttershy, Pony Pirate. This might be the most obscure suggestion on this list, but the strategy this card employs is something I have seen across the color spectrum, namely with the Lacking Lesson Plans Problem. With 2 AT and 2 Blue and Yellow req, this Pirate allows you to bypass opposing Troublemakers to confront Problems until the end of the turn. Combined with this Event, you can effectively replay this for free and keep brushing Troublemakers aside for as long as you like (or at least until you run out of VOICEs). Depending on your opponent’s deck strategy (farming, maybe), that can be really useful! If you want to keep Fluttershy around, she also has Swift, which is another discount-giving ability. She obviously won’t work against every deck under the sun, but I’d still consider keeping her on your sideboard.

Thanks for reading another installment of Card Shark! This Thursday, Thanksgiving Day in the United States, I’ll be starting the Dumpster Fire Card-a-Thon with a Premiere card that is… not good, but I like it! I’ll say this much as a teaser: it’s a Friend! Come back on Thursday to find out what Friend it is! I’d also encourage you to read my last post on the future of where my posts will be published! For now, Diamond out! 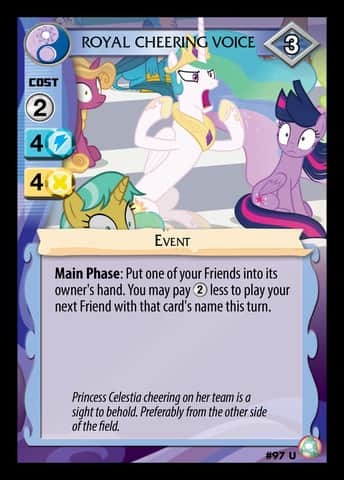