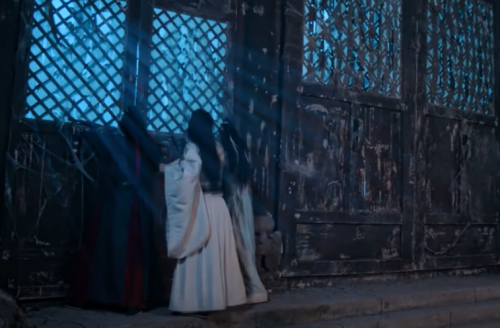 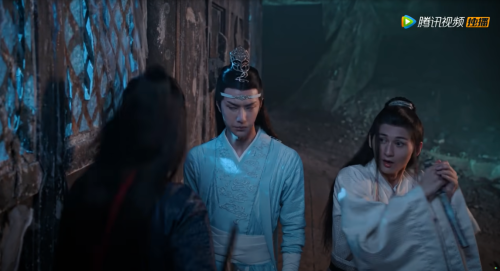 After everything that had happened, everything that had been revealed, Lan Xichen barely hesitated before closing his eyes and accepting that offer to die together. There was nothing waiting for him outside that collapsing building. His brother no longer needed him, not when Wei Wuxian was back, his uncle knew better than him how to deal with scandal, and even Nie Huaisang…

Nie Huaisang had probably never needed him at all, except that night as a weapon.

Death would solve his own problems and that of others’.

Just as he made peace with his own end, Lan Xichen felt a blow against his chest. He stumbled backward a few steps and opened his eyes, only to meet Jin Guangyao’s anguished stare and see his hand still extended toward Lan Xichen, frozen in place after that too weak push.

Around them the world continued to collapse, uncaring for the wounds they had inflicted upon each other.

It was too late, for both of them.

And yet, it’d be too easy to die like this, and after everything, perhaps neither of them deserved for things to end this easily.

In a split second, Lan Xichen reached out toward Jin Guangyao and, after grabbing him, used what little will he had left to rush both of them out of that temple. They feel side by side on the steps of the collapsed building, Lan Xichen exhausted and empty but alive still.

He couldn’t see any worse fate than having to live after this.

#lan xichen#jin guangyao#nie huaisang#mdzs#xiyao#kinda? I guess? I don't know what counts as xiyao#this took me out of my block because there's nothing I love more than lxc being emotionally broken :)#jau writes#theuntamedmulti
13 notes
venwe
Text

big brain: nie huaisang is the greatest mastermind of all

yO, I MADE A LYRIC VIDEO OF MDZS CHARACTERS SINGING.

i can’t stop shaking like rn, i JUST NEED TO DO IT BECAUSE AAAAAAAA well anyways if y’all wanna watch here’s the link! you know the drill

If I can just get through this next chapter I can start posting my gods damned rivers in Qinghe fic.

“Hold on, Da-ge, don’t close your eyes,” Huaisang’s voice was thick with tears, “Please, just stay awake Da-ge.  I… you need to stay with me, okay?  Please, Da-ge.”

Keeping his eyes open was difficult.  He was exhausted, wrung out, and wanted to just sleep for a hundred years.  But Huaisang needed him to, so he would do his best.  His jerky nod didn’t seem to ease any of his brother’s distress, so he coughed out a weak affirmative, keeping his blurry gaze trained on the pale moon of Huaisang’s face against the dark.

YES nie huaisang and shi qingxuan are my favorite mxtx characters! YES i am a youngest sibling!

I know wip Wednesday isn’t QUITE the thing here that it is on Twitter but if you read “soaring, carried aloft on the wind” and asked for Wangji’s perspective…you’ll be happy to know I started that story.

#The Untamed#Nie Huaisang#mdzsnet#mdzs#my gifs#I wish.......... I had these without subtitles so I didn't have to crop around it#There's this one shot in this ep that I want to use for an actual edit#but it looks awk with the crop and the subtitles are a no from me#Like I'd love to just buy the show but I literally cannot find it on bluray#or I mean not for an ok price bc I the untamed I love you but I'm not shelling out 200+god knows how much shipping for you
58 notes
winterqueenfae
Text

That on the rare case he tops he is an absolute hard f*cker. 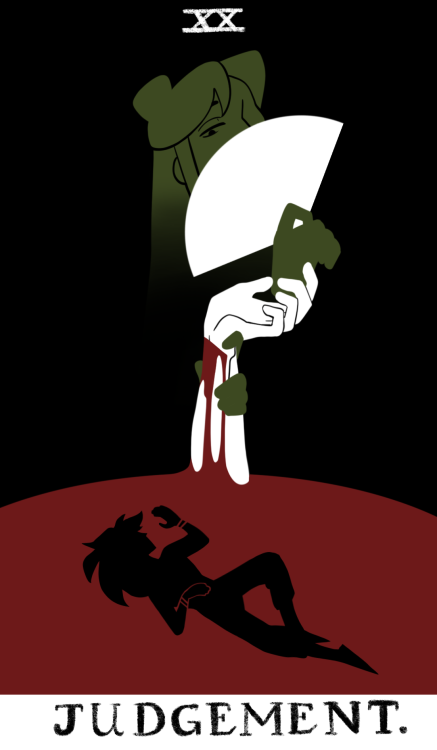 Heya! Thank you for finding my blog :D

I can answer your question solely from the point of view of CQL - I also haven’t watched Fatal Journey - and I will add points on how I see things (the point of view of a practicing Cultivator), so I might clash with other opinions.
Now, with all warnings ahead, let’s dive a bit into the story!

Why can we be ‘sure’ it was Nie Huaisang behind Wei Wuxian’s resurrection?

In Episode 1 we see the first hint with Nie Huaisang in the same room as the disciples behind a curtain. It was NHS who paid for this special storytelling of the Yiling Laozu. If you listen closely, the way YLLZ is described varies a lot from how others perceive him. Imagine Sect Leader Yao would have paid that man to tell the story.. it would have become a very very different rendition to the one we heard.

It is already highly suspicious for the Nie Sect Leader to appear in the Mo Village at this time. Why would he care enough to pay an unknown man to tell stories about the YLLZ to the young cultivators? A story he scripted, on top of it. He paid the man in gold - way too much money for a ‘simple’ task.

What we don’t see, but learn later, is the fact of NHS being very close to Jin Guangyao. Obviously not because he likes him so much, but to be able to sneak around the Jin Manor to fetch or read the many papers, scripts and theories Wei Wuxian left behind in the Burial Mounds. The Soul Summoning ritual was surely his invention, if the look Wei Wuxian owns when he sees the talismans is anything to go by.

At those times NHS met Mo Xuanyu. A brilliant mind with the reputation of a low level Cultivation. I am fairly sure that Jin Guangyao’s original plan was to resurrect Wei Wuxian himself, with the help of Mo Xuanyu’s body - thus the reason for MXY hiding his face. There are enough possibilities to change the Soul Summoning arrays, in order to resurrect WWX, but at the same time take his will. If Jin Guangyao would have succeeded, he would have had the ‘ultimate weapon’, since WWX brilliant mind would have still worked, but he would not have fought him. Depending on the changes of the array, he might have even worked for JGY. But these theories aside…

It is to be suspected that it was NHS who managed to get MXY out of Jinlintai, and had helped him setting up this special form of the soul summoning array. With MXY Cultivation level itself, it would not have been enough to call WWX into life successfully. So NHS arranged more magic - and more persons - to fall into place on this day.
It is absolutely obvious that summoning WWX would not have worked if not someone he cared for was near. Lan Sizhui was only a few houses away from Mo Xuanyu’s room, inside the lecture hall. Lan Wangji was near too (my guess is the next village).
The man that seemed to be drunk had the spiritual flag and soul summoning bells.

Another reason we can be sure NHS is behind the actual plan for the resurrection is the appearance of Baxia inside the Sword, creating havoc inside Mo Manor.
It is explicitly said that the Sword must have arrived in Mo Manor in the night when the Lan disciples were standing watch on the roof. It takes a lot to ‘smuggle’ a ‘cursed’ sword into the village under the nose of the Lans, so we can safely assume that the procedure was different. From personal experience on night hunts, I would say that NHS had Baxia’s spirit in a soul trapping pouch and the sword in another magic pouch. At night, he took out both and merged them. The moment the merge was done, the havoc started.

Now, let’s go on to your next question:
Why would NHS go to these lengths?

First of all. Grief. A powerful emotion that makes people move in ways no one thought possible before.

Second. Hatred. Another powerful emotion. If you would know the person who very very cruelly sent a very dear person of yours into the grave and then experimented on his body, in order to make him their puppet… what would you do?

Third. Knowledge. WWX is an asset. His mind is working in ways no one else can understand nor reproduce.
I am fairly sure NHS tried to get his plans working without WWX involved, but ultimately came to the point where he couldn’t go any further if WWX won’t help him. The Yin Iron part JGY and Xue Yang had created was reason enough to need to involve WWX. He is the master of it. He is the only one being able to actually control it.
If not for WWX, NHS would not be able to get his brothers body back into one piece, let him lay for rest and at the same time make sure Baxia doesn’t erase half the cultivation world on its own. Next to the part that only with WWX being alive, NHS is able to set his plan into the last shreds of action against JGY.

Have I been able to answer your questions? Please let me know if you need further or deeper explanations! <3

Gotta hold myself accountable! The Sentinel AU took exactly 200 words to become cyberpunk. So that’s a thing I’m doing now. It also took me approximately 500 words to give JC his first breakdown. :D

“Da-ge!” Huaisang exclaimed gleefully. He snapped his folding fan open to cover the lower half of his face. “You bring me the nicest gifts!”

There was a man in the foyer. He stood tall, spine straight, broad shoulders squared, his face all beautiful angles. He didn’t exactly sneer, but he did look unamused, surly. His sharp eyebrows highlighted electric brown eyes. The leather duster he wore hid most of the contours of his body, but he wasn’t bulky.

Huaisang could not wait to take him for a test drive.

“This is Wanyin, and he’s already been briefed on all your evasive tactics,” Mingjue said.

Huaisang turned to pout at Mingjue, lowering his fan.

“And what happened to his predecessors,” Mingjue added darkly.

Huaisang rolled his eyes as he stepped up to Wanyin, fingers circling the pivot of his fan. He looked up into that serious face, studying. Wanyin looked right back, expression unchanging.

“He’s the - he’s your last bodyguard,” Mingjue said, exasperated. “Do you hear me, Huaisang? Your last one before you’re never allowed to leave the house at all. It took me forever to find an agency that hadn’t heard of your reputation.”

Mingjue had looked personally, then. He hadn’t left it to Zonghui or Meng Yao.

“Wanyin with no family name,” Huaisang said. He had hoped for a flinch or a name from the man. He received neither. “Do you have anything to say for yourself?” 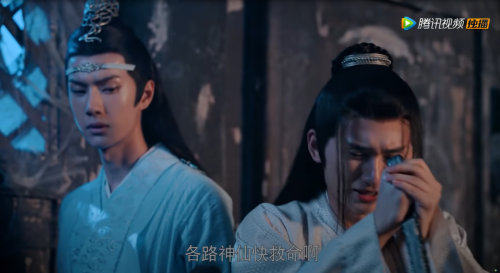 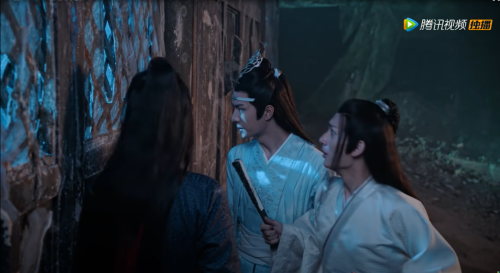