NOOSHAHAIQ WHY WOULD YOU DO THIS AHHHHHHH

(it can even be something that is just for two of them! like renora, martial arcs, or nora’s arc idrc i just wanna hear smth)

Lily Valkyrie-Ren. I don’t always do fankids but when I do…yeah I got nothing enjoy!

It was only five words; it shouldn’t have been such a difficult thing to confess.

“Be careful,” was what came out instead, her voice wavering slightly.

Come get y'all’s Bumbleby and Renora food. I got to write some character interactions that I hadn’t really done before for this one and I really like how it turned out. 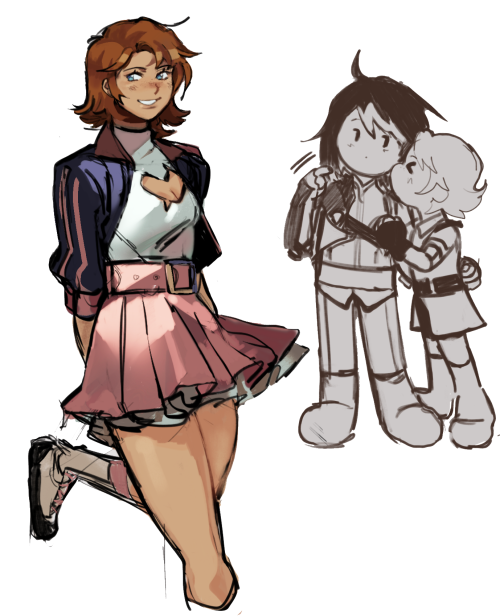 #rwby, #nora valkyrie, #renora, #only a little...but just know i am thinking only of them rn
621 notes · See All
paulacrackheadText

I remember when I was watching the first ep of rwby I was like ‘omg ren and nora are ultimate wlw mlm solidarity’ and I STAND BY that 100% they are both bi and also in love :)))

Nora: How did you know I was gonna propose?

Ren: Jaune hasn’t been able to look at me without crying for a month.

Ren and Nora’s relationship is not unlike Ruby and Oscar’s relationship - bad guys in love with each other. I call them the OG babey overlords bc they’re around their early thirties. However, the loss of his parents and the destruction of his village stunted Ren horribly in terms of emotional development and he’s more than a little dependent on Nora, relying on her to make decisions for the both of them. It makes losing her all the more painful for himself.

Ren and Nora have two modes: lethal crimes lords and domestic disasters. Lethal crime lords is when they cause mayhem for whatever region they’re in. Domestic disasters is what it says on the tin – they’re bad at being ‘normal’. They spent more doing crime than functioning as members of society.

These two … actually have kids. Twins, in fact. However, their lives aren’t the safest things for raising two kids and full time normality was never for them. And so the kids were given away to be adopted into a loving family. Nora and Ren pay ‘child support’ to make sure their kids are looked after. Not to mention, the kids love the babysitters that come to look after them from time to time … even if they don’t know that their babysitters are their births parents.

After getting the kids + adoptive parents out of Vale and somehow comfy in Mistral, Ren was in a really bad way. He was depressed, he was angry and he wanted blood. And none of this would have been happening if it wasn’t for the people that caused Nora’s death – Ruby Rose, her king and Cinder Fall. For now, he has a tentative truce with Ruby in exchange for killing Cinder, all the while he figures out a way to get rid of the Babey Overlords.

Ren isn’t exactly sure what he’ll do once he’s taken his revenge.

He never thought he’d have to live in a world without Nora.

Ruby thinks they’re a delight! … However she does feel guilty about Nora’s death. But you can’t make an omelette without breaking a few eggs. Oscar thinks they’re useful, but he isn’t trusting of them. Blake isn’t a fan and can’t wait to get rid of them. Yang thinks they’re fun to hang out with but she isn’t too fazed by Nora’s death. Not to mention, she takes sadistic pleasure in how Ren suffers afterwards. Cinder + Co don’t really have any interactions with BO!ReNora outside of confrontations, and thinks they’re threats. Cinder, however, struggles with her ‘first kill’ and has nightmares about it.

Ren: I honestly don’t think you could tie your shoes without me.

Nora: Four. Four should cover it.

Nora: I’ll compromise you through that window.

Nora: Asked the husband to grab a cheesecake while he was at the store.

He came home and with great pride presented me with Strawberry Cheesecake Greek Yogurt.