(Was wondering when someone would use this. Guess it’s time to hurt people)

Summer: *sitting at the edge of a cliff, sighing* I… I should’ve been there to help you. To keep you safe.

Summer: *pulling out the shattered remains of her weapon, a gift from her lover* I… I miss you. I miss you soo much… I should've  been there to save you. To keep you from falling to the dark.

Summer: *looking up to the sky, the veil parting enough to watch Raven talk with Cinder* Raven, my love. Im… Im so sorry I failed you. I told you I’d stay with you forever and now we’re a world apart. I tried so hard…

Summer: *reaching out to the image of Raven she saw, her own hand bloodied* Please keep yourself safe.

Summer: *feeling a wind pick up, watching her body turn to rose petals as they flew off in the wind* And please keep our child safe.

wait wait wait briar rose rwby theory…if its real someone has to kiss summer to wake her up….rosebird nation how we feeling!

Lights flashing, bodies moving, she could feel the bass in her bones. Lost in the music, she pressed back against the almost feverish body behind hers, felt Raven grin against her neck as they danced.
“I love you.” Summer felt more than heard Raven say the words against her skin.

Okay, so I’ve actually done three sizable posts on this topic here, here and here, but if you want the cliffnotes version: Basically its that through some kind of super-science/magic-chicanery, Raven somehow managed to knock Summer up and Ruby is their magic lesbian lovechild. For me, this theory is sort of ‘half’ in jest. Half because I legitimately believe that there is SOME kind of major connection between Ruby and Raven that we don’t know about yet. The ‘Raven is Ruby’s deadbeat dad’ bit is more just something I think would make for a really fun plot twist.

My header is now gay moms I’m doing well for myself.

#alice.txt, #rosebird, #spoiler alert it's part of the comic I'm working on heheheheheheheh, #only have 2 pages left
31 notes · See All
aerisleis-ficsText

Triggered by the Summer Rose as Briar Rose discussion with @narwhalish

This was a fun little writing experiment.

Small piece centering around the concept of Summer Rose as Briar Rose / Sleeping Beauty in perhaps a too literal sense.

#not a reblog, #rwby, #rosebird, #i just, #im love them
2 notes · See All
blondieartsText

I’m halfway done so here’s a preview of a rosebird comic I’m working on. 👀

no i will not explain this one 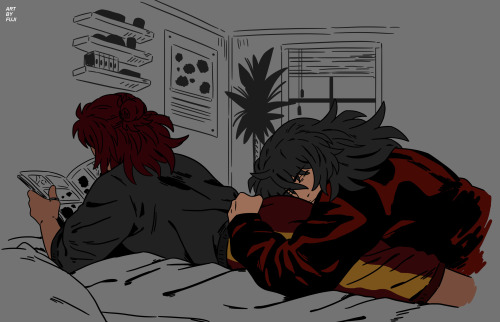 #rosebird, #my art, #but if you follow my twitter, #you probably know why i drew this, #wink wonk
161 notes · See All
drunkscythmasterText

Summer lay back on the towel, relaxing under the sun while Qrow worked on burying a sleeping Tai in sand.
Then Raven reappeared from the water and held something out to her. Summer took it. “Is this coral?”
Raven shrugged and nodded, blushing. “You mentioned liking it.”
Summer smiled. “Thanks.”

#raven is eurydice, #summer is orpheus, #ozma is persephone, #salem is hades, #ozpin is hermes and magically different from ozma, #and idk maybe the rest of the branwen tribe as the fates?, #qrow maybe even?, #hadestown au ramblings, #rosebird
12 notes · See All
yangsbandanaText

just thinking about those ‘raven is ruby’s real dad’ crack theories and imagining the fandom meltdown that would ensue if they were true. puts a warm smile on my face.

#raven branwen, #rosebird, #like i know it's crack, #but GOD wouldn't it be funny, #just the wailing and gnashing of teeth from the homophobes and rwbytubers that still watch this show for some reason, #it would be next level, #and glorious
85 notes · See All
theladypeaceText

- They all met through college. Summer managed to get through high school somehow and thought she’d put herself through more suffering by going to college. Tai’s mom would beat his ass if he didn’t go to college. The Branwen twins honestly just went so they could try to figure out what to do with their lives.

- When Raven saw Summer for the first time, she actually gasped at how beautiful she was.

- The other Branwen twin also has a crush. Qrow has his eye on his pretty history professor, Ozpin.

- They all go to the library to study. They pass by each other and see one another. Eventually, they became acquainted and started hanging out.

- They also get close with one of their professors. STRQ and Ozpin get pretty close to the point they all consider themselves friends.

- One day, the group was heading to Ozpin’s house. By accident, they find the entrance to a secret bunker.

“Sooo…” Summer whistled. “Who wants to go in first?”

Qrow, Raven, and Tai all turned to her. The Branwen Twins wore blank expressions, and Tai shrugged but still looked at her.

Qrow said, “You’re the only white one here. You’ll be fine. Go.” He gestured to the entrance on the floor.

Raven muttered, “Not wrong.” She thought for a moment. “What about the only straight one here?”

They all turned to Tai.

“You’re male and straight,” Qrow explained. “You have more privilege than us. You’ll survive.” He then quickly murmured, “Probably.”

Tai glared at him. He took a deep breath and opened the door attached to the floor. He stepped onto the stairs and slowly walked down them.

It went silent. The only sound was the creaking of the old, wooden steps. Summer and Raven both exchanged an anxious look. Qrow gulped as he watched Tai reach the last step.

Tai paused when he stepped onto the concrete ground. He turned around and waved his hand at the others. He gave them a thumbs-up.

They walked down the stairs. They held their breath and listened for any noise.

It was dark, but they could see a faint light behind a wall a few yards away from them. Qrow reached for the wall. It was rough and rugged. He searched for a light switch. Eventually, he found it. He flipped it. The light shined and reached every corner of the room.

Summer remained silent, but Qrow could see her covering her mouth.

Qrow turned around to see what they were talking about. He softly gasped when he saw the walls covered with guns and knives. Papers were scattered on a desk. First aid kits were hidden in the corner. Outfits and wigs used for disguises were on racks on the side.

Qrow heard the cock of a gun. He gulped. He turned around, slow and easy. There stood his professor with a handgun. His eyes were tense. His finger rested on the trigger, ready to shoot.

“Oz?” asked Qrow. He stepped back. His eyes moved to Ozpin’s face, to the gun, and back to Ozpin.

“Why do you have a gun and a secret basement?” Summer shrieked.

“We were coming over to invite you to hang out,” Qrow answered nervously.

Ozpin lowered the gun, but he didn’t put it down. “None of your concern.”

“Uh, I think it is,” Tai blabbered. Ozpin glared at him.

Ozpin’s eyes moved to each of them. He opened his mouth to speak, but nothing came out. He stammered, “I…”

“You what?” Raven said impatiently.

“We have time,” Raven spat.

- Ozpin explained some of his story (which I won’t be explaining in this post). He invites STRQ to join him. They find out Glynda, the English professor across Ozpin’s history class, is in on it too. They learn more about the criminal underground.

- The group goes on a few heists and jobs planned by Ozpin. They remain with Oz even after they graduate. This connects some of them more than they expected. Summer and Raven start dating, and Qrow and Ozpin date.

- Summer and Raven get married and decide to have kids. Thanks to Tai being the sperm donor, Yang and Ruby are born. Yang and Ruby grow up with their two moms, Uncle Tai, Uncle Qrow, Uncle Oz, and the grumpy blonde lady who visits sometimes they know as “Glynda” AKA “Scary Lady.”

- Qrow remains loyal to Ozpin. They don’t plan on getting married, but they have a strong relationship.

Inbox is open for any asks about the characters in this AU!

Rosebird Locked Tomb AU… The necromancer and her cavalier 🥺

reading the song of achilles with rosebird on the brain is a bad time. especially when you read this part 🥴 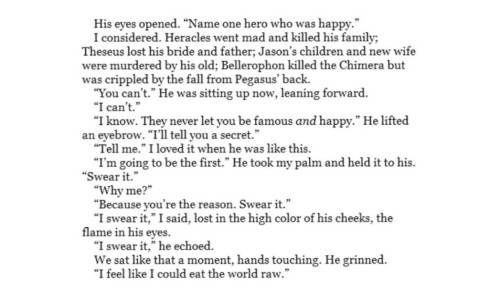 #girl help im drifting off to sea, #everyone please shut up im already thinking about how to draw this, #🥴🥴🥴, #rosebird
53 notes · See All
melonishusText

Raven - You are not a witch

Raven - Prove it. Do something magicy

[Summer thinks for a long while]

Summer - I got an idea ….you can be my familiar

Summer - This….this is the first time I’ve done this….are you sure you want to

Summer - Well….you gain an animal form…..you always know where I am …..and if I should ….YOU KNOW…..you can bring me back

Raven - I doubt I’ll ever have to worry about the last one, so let’s do this

[Summer pushes Raven against the wall, a thick plume of white fog emanating from her mouth as she kissed Raven. Ravens eyes widened In surprise, thinking that Summer was playing some kind of childish game. She felt a deep connection grow between them as she started to hear Summers voice in her mind]

Summer: my uncle was dating this woman for 25yrs and he ended up breaking up w her bc she wanted marriage and was “moving too fast” for him. but ironically enough his next gf ended up murdering him. theres a lesson here somewhere

[Raven strolls into the God of Darkness’s domain]

GoD - Hello Mortal, what would you ……

Raven - [turns around, arms deep in souls] [shrill from stress] NO ! Fuck YOU

[The GoD is stunned into silence]

[Raven walks out the Darkness domain, the GoD starts crying]