I see no lie

I see no lie

TYLER HAYWARD HAS SOME FUCKING NERVE SHIT TALKING MONICA ABOUT WANTING TO PROTECT SUPERPOWERED PPL AND CALLING THEM DANGEROUS WHEN HE HIMSELF SPENT X AMOUNT TO TIME TRYING TO BRING BACK VISION, A SENTIENT WEAPON NOW VOID OF ALL EMOTION FOR HIS BULLSHIT

Yo if I ever see him, its on sight cause hes so disrespectful

Someone please Draw the S.W.O.R.D trio as this draw the squad template

i have a feeling that hayward is working with wanda.

S.W.O.R.D: Hey let’s ignore these three people. We know better than a person who worked with/know a heist robber turned vigilante who can summon ants and can become the size of an ant and a giant, A woman who knows one of the most powerful superheroes in exsistance and a woman who met and befriended a Norse Hero God. Now let’s antagonize the strongest and most powerful being in this reality who could have single handedly killed Thanos and is mentally unstable due to her losing her family, birthplace, the love of her life and friends during her tenure as a superhero paramilitia member and oh she can also bend reality, let’s try to assassinate her. That will surely solve things.

Every single S.W.O.R.D agent when Wanda suddenly expands the hex

wanda turning the s.w.o.r.d. base into a whole ass circus is poetic cinema

Knull continues to make his rounds in several King in Black tie-ins, including issues of Daredevil, Fantastic Four and S.W.O.R.D. Meanwhile the Thunderbolts take on a mob of “Knullified” inmates at Ravencroft Institute. And not even Wakanda is safe from the symbiote god, as Black Panther enters the fray in King in Black: Black Panther #1 by Geoffrey Thorne and German Peralta. [Marvel, $3.99 or $4.99, depending on the title]

See what else is arriving in comic shops this week! 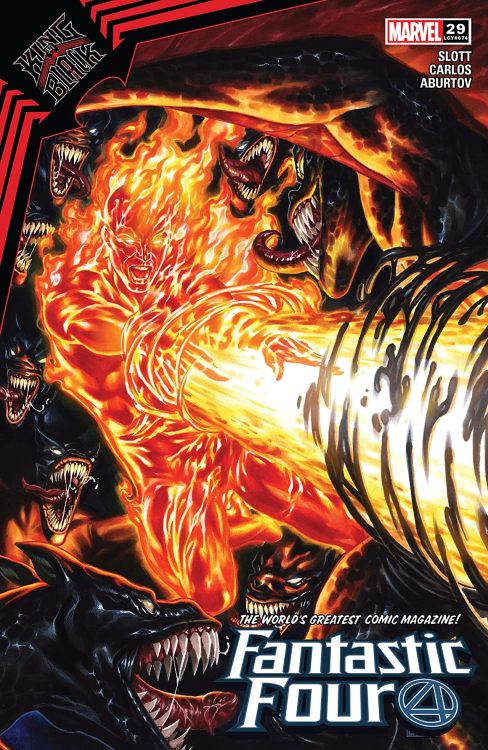 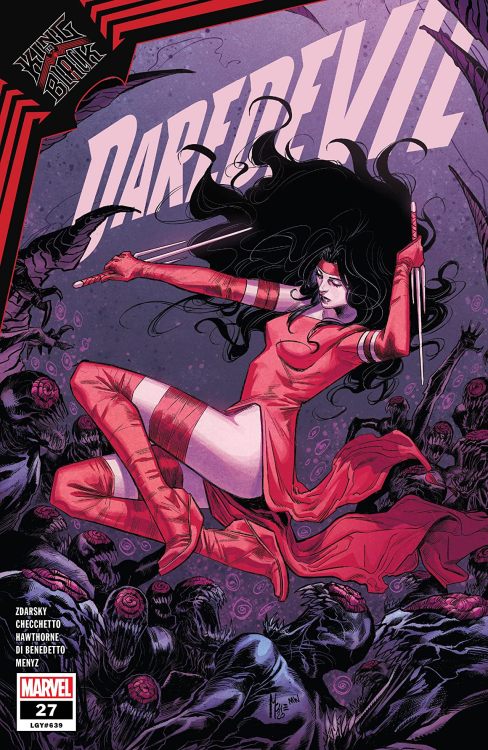 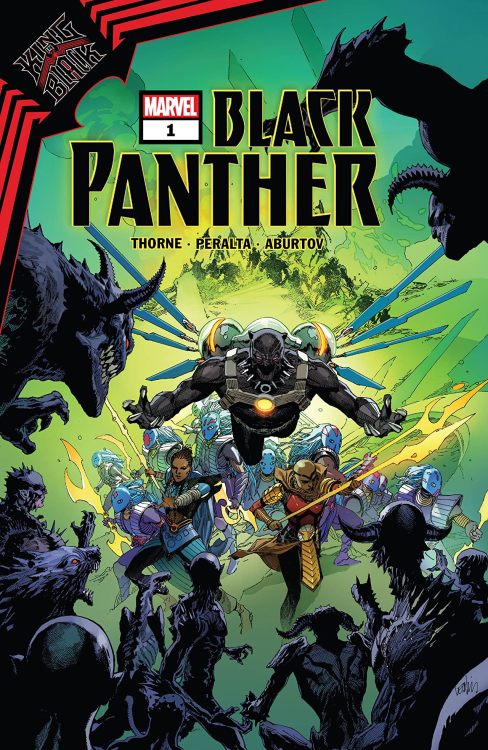 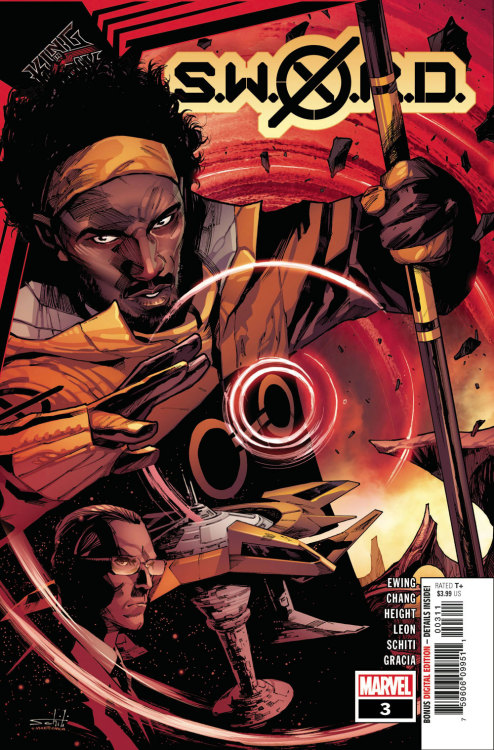 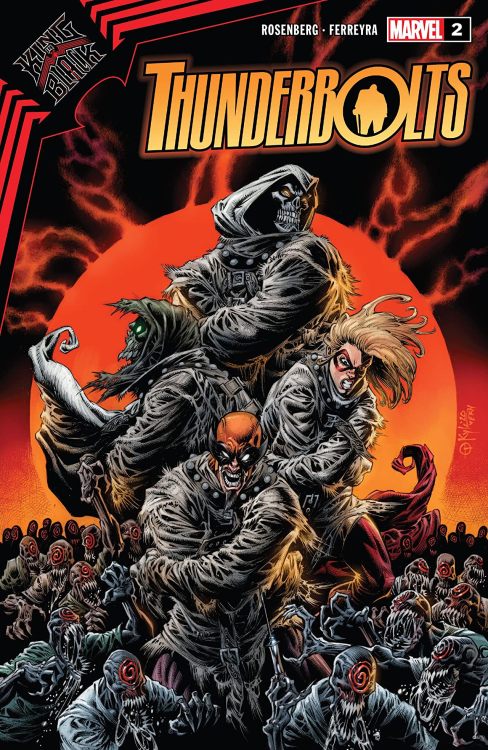 Okay, hear me out.

For all you Wandavision theorists out there, I’d like to posit my thoughts on the S.W.O.R.D is evil boat. Most people are going with the through line that Heyward was quick to label Wanda a terrorist, but I’d like to go down a different Avenue. The internet says that in the comics, the S.W.O.R.D acronym stood for ‘Sentient World Observation and Response Division’, but this has specifically been changed to “Sentient Weapon Observation and Research Division,” for its depiction in the MCU. In his first appearance in episode four, Director Hayward talks with Rambeau about the changes implemented into the agency since the snap, specifically a larger focus on “Robotics, nanotech, A.I. Sentient Weapons.” Later in in episode five, we see 'supposed’ footage of Wanda breaking into a sword base to take back Visions body. When we do see his body, or what we assume to be it, it’s been heavily disassembled to point where he isn’t even recognizable, obviously doing something far more invasive than just storing his body.For better or worse, Vision was the pinnacle of sentient weapons, demonstrating immense scientific breakthroughs in both the weapon and sentient elements. Of course his body would be something that S.W.O.R.D would be more than eager to get their mittens on. In summary, the groundwork has been laid for S..W.O.R.D having a deep interest in creating their own sentient weapons, and it could be inferred that they wish to do so with knowledge gleamed from the Vision’s corpse.

Is it just me…or are those the same outfits?

this was in my mind since i saw wandavision episode 5 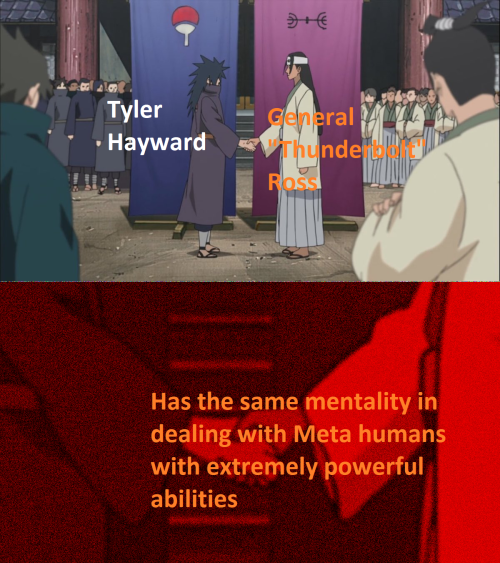 There are a lot of questions still surrounding WandaVision, but the biggest one is probably how Vision is alive. We know that Wanda is reanimating his body, but how? I think that she is using her powers to create a sort of “Infinity bubble.” Her powers came from the Mind Stone, and Vision was powered by the Mind Stone. If she concentrated her power into one specific area, it could have enough energy to power him. This is supported by the hexagon shape of Westview, as there were 6 Infinity Stones. Also interesting is the fact it is called “the hex,” a term that can also mean spell. We see that Wanda isn’t controlling everything. She didn’t make Pietro appear. It’s almost as if someone is using her powers against her, or using her powers to create Westview. Agnes is especially suspicioius. She keeps showing up with whatever is needed, she has poisonous plants, and said something about being a tiger right before a tiger toy appeared on the kitchen table. It’s almost as if Agnes, the tiger, has infiltrated Wanda’s home. It gets even stranger when Wanda packed the tiger away, almost as if trying to get rid of Agnes’s influence. One other incredibly prevalent detail is the color coding. Almost all of the costumes and sets in Westview are red, blue, and yellow. The couch Wanda sits on, her clothes, her family’s clothes, the stained glass, everything. These are, of course, the Captain Marvel colors picked out by Monica Rambeau. Captain Marvel was already mentioned once, and she got her powers from an Infinity Stone. She could, theoretically, maybe enter Westview. Vision’s tie had a similar pattern to the magic box in episode 2, with something that maybe looks like the Mind Stone bursting. Also interesting is the fact that Wanda can’t control her children using her mental manipulation. At any rate, the level to which we have been told Wanda is the culprit leads me to believe she isn’t. Marvel may be trying to direct us away from the real villain, similar to the Mandalorian season 2 finale. Disney had various leaks that were all incorrect, and one actor rumored to play Ezra Bridger put out some suspicious Tweets before its release. The recent article of Elizabeth Olsen’s (Wanda) saying that the psycho Wanda plotline is her favorite only adds to my suspicion. They’re putting out so much with this theory that it’s either massively important to Marvel Phase 4, or it’s a misdirect.

What if that’s not Mephisto as Pietro? What if it’s someone from the town that Wanda chose for he to take the place of her brother? She cannot bring her brother back to life, but she could bring Vision because he is a robot. So she decides to have someone from Westview take her place.

Monica said that Wanda controls them all telepathically and we saw that when she did it with those agents. Let’s remember that all those people who are inside the town are using other names, because that way Wanda wants it.

They are under her control and she has said that she has everything under control. Norm said he could hear Wanda inside her head. We see it too when Agnes asks if she wants to do the scene again.

Fun fact, Vision asks Wanda why there are no other children, well she decides there must be children for Halloween.

I like the idea that Tommy and Billy are nothing alike. I like that, because that way they can use two different actors (maybe they look a bit alike) in Marvel movies.

By the way, they asked if Wanda had an alias. I would like to say that in the end she will be given the name Scarlet Witch by the agents.

ok so I wanna talk about my theory about Evan Peter’s character here.I believe he’s actually agent Woo’s missing person and he planned this whole thing. how? hear me out

I think he’s Mephisto who’s playing Pietro for Wanda to get close to her now that she gave birth to the children (we know that Mephisto is actually want Wanda’s children for power) to manipulate her and take them.

if we take House of M for our source, we know that Pietro convinced Wanda to create a new reality where they all are a happy family living together.So it make sense that Mephisto is using Pietro’s form to get close to her

so why would he want to bring FBI there? easy! so they can catch her when he’s done with her.but i don’t think he had a plan for S.W.O.R.D so when anything with S.W.O.R.D happens,he’s the one who stop it

what do you think?

1) mephisto is hiding as the animals to spy on wanda