ㅤㅤ￤Like or reblog if you save

This is slowly becoming a Bucky Barnes appreciation blog… How did I become this?

Angel of Music! Guide and Guardian!

Grant to me your glory!

Angel of Music, hide no longer

If not for the mysterious tale of the Phantom of the Opera, surely the Opera Populaire is known for its infamous and tragic love story, of Y/N L/N, her Angel of Music, and her childhood sweetheart, Vicomte/Captain Steve Rogers.

𝖆/𝖓: dedicated to @yagurlrosie , this entire series is for you, bestie <3

The chandelier sat in the middle of the domed ceiling, casting its light down on the stage like a sun, illuminating a single, feminine figure, arms out-stretched in song.

From the enslaving force of Rome!”

No sooner had the last notes of the opening aria pierced the air, directly from Lady Loki Laufeydottir’s skilled and trained throat, than the stage burst into activity. Ladies in swirling gowns, soldiers, dancing slave girls; all knew their place in the coordinated chaos.

#sebastian stan, #the devil all the time, #he deserves it, #i love him
15 notes · See All
blueleatherbagText

Ruined For Good (Part 2 to Ruined)

A/N: THIS IS IT! This is what you have all been waiting for!! Prt 2 to ruined is now here ladies and gents. I’m so sorry for taking so long but I guess here’s your early Christmas present ❤️❤️ enjoyyyy

That is all Steve could feel. He had spent his life dedicated to this woman and she cheats on him, and with Tony of all people.

How could she?! Not only was he mad, he was disappointed. This was (y/n), the woman of his dreams. So he just did what he knew others  to do. So he took the Asgardian mead from Thor and downed the whole glass in under three seconds. Straight away he could feel his body start to feel light and he can start to feel the alcohol reach his head and move around his body sluggishly.

(Y/N) runs down the stairs after returning from the room that Tony had dragged her inside of. Her face was red from the tears that were falling from her face and the hiccups making her body shake in fear and disgust. All she wanted was her loving boyfriend, to snuggle up in his big, warm and safe feeling arms.

Reaching the bottom, she expected Steve to still be sitting at the table that she left him at but instead found him in the arms of Bucky, crying to himself. What had gone on? What had she missed?

She cautiously approached him, scared that any sudden movements would startle the man, even if they were in a room with hundreds of people and music loud enough for the deaf to hear.

Reaching him, she placed her hand on his shoulder, for him to turn around, look shocked and shrug her hand off as if her touch scorched him. She could see the fire burning in his eyes and she knew right then that he knew.

She could read Steve like an open book because he was so open with his emotions. This is how she knew what he thought.

That caught the attention of all the party goers, and all their friends. “Steve, not here.” she mumbled so quietly that no one heard her, but she knew he did with the way his eyes lit up with so much anger that she knew he would burst any moment and hoped that it would be in private. But as soon as she saw that fire expand in his eyes, it disappeared just as fast. Just blank and cold was all she could see in his eyes and all of it directed at her.

She was desperate to make him understand that she didn’t do it willingly, that she was forced.

“Do not call me that, you… you… cheater! And with Tony of all people!”

At once, she heard all the guests and her team gasp. By now she was sobbing trying hard to get words out but all she could do was run, run away from her problems. She ran away from all the curious and shocked eyes of the party, and the smug eyes of her abuser. When she arrived at her shared room with Steve, she flung herself onto the king bed and just sobbed. She was tired, sad, she felt as if everything and everyone was against her, and that the one man that was supposed to support her was not there because he was against her too. She had no one, she was ending the way she started, alone.

Just like when she was only a child of 4 years old she had everything she loved torn and taken away from her - like when her dad decided to steal her mothers money only to gamble it all away in the next few hours.

She felt broken, just like when she was 14, when she found out that her mother had passed away in the middle of the night surrounded by empty liquor bottles and empty syringes.

And now the cycle of heartbreak starts all over again for her - drink her sorrows away and sleep and hope that she never wakes up.

That night, while everyone was outside having fun, Nat flirting with Bruce, Clint with Thor and Bucky kissing the brunette woman that he just met, and Steve Drinking his sorrows away with Asgardian mead,  (y/n) left. She left them all behind because she realized that she was only ever going to be alone because nothing good ever came for her.

All she knew was that she was ruined.

#sebastian stan, #just found this one on my phone, #god he is INSANELY pretty, #just perfect what the hell, #his bone structure is magnificent, #pretty boy
48 notes · See All
blueleatherbagText

hey! sebastian stan i miss u.

HAHA no seriously i do .

if you would like to be added to the taglist, just send in an ask!

how did i never see this picture???

I need more mutuals🥺 hopefully I can find some new ones In the tags! Send me an ask if you wanna be my friend..

Oh and if you play among us we’re besties now✋🏼👀, and baby yoda and um If any one that sees this wants to be a Steve or ransom anon🥺 I’ll give you a big kiss on da lips

“Jesus, doll,” he gasps, watching the gauzy robe drop from your form to reveal nothing.

My partner just pointed out that Christian Kane and Sebastian Stan should play brothers in something.

Obviously Christian’s character would need a small polycule (one boyfriend, one girlfriend, all together in a triad), as is clearly written in all of his contracts. ;-) Sebastian’s character should also be queer (and rather vulnerable and also awesome).

Together they… do some kind of cool stuff and support each other in their various doings. There would be action and literary/art history references and sweetness.

#christian kane, #sebastian stan, #ideally Sebastian's character would be dating a character played by either Chris Evans or Anthony Mackie, #but like I am flexible on this point
9 notes · See All
perfect-stornPhoto 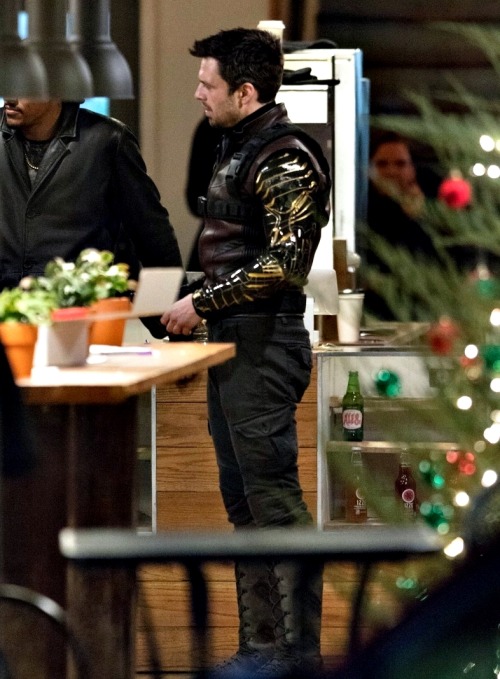 Sebastian has been included in Netflix’s For Your Consideration awards campaign for The Devil All The Time.

To be clear: he has not been nominated, his performance has been put forward to awards’ nomination groups for consideration.